Monster Energy Kawasaki’s Ryan Villopoto became the first rider of the 2012 Monster Energy AMA Supercross, an FIM World Championship, to win two races, leading all 20 laps of the Main Event tonight at Angel Stadium in front of a sold-out crowd.

Villopoto picked up his second Nuclear Cowboyz® Holeshot of the season to start the Supercross Class Main Event with TwoTwo Motorsports/Bel-Ray/Honda’s Chad Reed in tow.

Reed passed Villopoto on the opening lap but was passed back the following lap.

“I knew I had to stay on my toes and not make a mistake. We need to take it one race at a time. I had a great start and to be perfect on the start difficult.”

“Tonight’s track was difficult,” said Tomac. “It’s too bad Cole (Seely) slid out because he was going really fast, and I knew that I would have to work hard to get around him. I look forward to going to San Diego next weekend.”

TwoTwo Motorsports/Bel-Ray Racing’s Chad Reed has finished a credible third place at the fifth round of the Monster Energy AMA Supercross, an FIM World Championship at Anaheim’s Angel Stadium today.

The Australian, who was struck down with a stomach bug in the days leading up to tonight’s event, struggled throughout practice and qualifying.

While he wasn’t able to push as hard as he would have liked, Reed rode two solid races finishing his heat second before taking third in the ‘Main Event’.

“I was happy with third tonight as I have been throwing up the last few days and just felt awful,” Reed said.

“Today was tough, I tried to honour all my fan and sponsor obligations but I felt wiped out.

“In the main I got a good start and passed Ryan (Villopoto) for the lead on the opening lap. He passed me back and then I lost a spot to James (Stewart).

“I tried to put the pressure on him towards the end of the race but I just didn’t have anything left in the tank,” Reed added.

Reed will recuperate ahead of the sixth round of the 2012 Monster Energy AMA Supercross, an FIM World Championship, at San Deigos’s Qualcomm Stadium on Saturday February 11 (AUST Sunday February12).

Red Bull KTM factory Ryan Dungey came off a heat 1 win in the Angel stadium at Anaheim2 in the AMA Supercross Championship to finish fourth to retain his place in the ‘Big Four’ – the all former SX Champions who are at the forefront of this year’s edition. Meanwhile KTM teammate Marvin Musquin continued his charge for dominance claiming yet another podium in the Lites class.

Dungey is now third in the championship behind Ryan Villopoto and Chad Reed of Australia. The Big Four have all topped the podium in the first five rounds and the top three are separated by only five points, proof enough that this 2012 series is going to go right down to the wire.

Dungey looked very strong in the lead up to the main and a win in the heat race gave him a top gate choice. When the gate dropped he leaped forward and found himself in sixth place at the end of the first few corners. It took him four laps to pass Davi Millsaps but he finally got around him with a smooth inside pass through a corner. He then concentrated in reeling in Justin Brayton in fourth place and slipped past him in lap 12. He continued to knock off impressive lap times throughout the remainder of the event but the top three riders had already pulled out to a sizeable gap that he was not able to close.

“I am not pleased to finish off the podium for a second weekend in a row. I had a better start in the main event this weekend but I struggled to make my passes and allowed those guys to move ahead. I will continue to work on my starts for next weekend and make sure I get my KTM back on the podium to remain in the points chase for the championship,” Dungey said.

KTM’s French rider, double MX2 World Champion Marvin Musquin continues to make his mark on the Lites East division, delivering yet another podium and underlining that consistency is the name of the game for this competition. Musquin wowed the audience with a near holeshot in his heat event followed by a quick pass into the lead.

His second place heat finish earned him a top gate pick for the main event and he had already positioned his 250 SX-F into third position behind Eli Tomac and Cole Seely in the opening laps. Musquin was able to maintain third place throughout the 15-lap main event despite heavy pressure from Dean Wilson in the final five laps. “I could feel that Wilson was close but I just continued to ride my own lines and I was able to hold him off and secure the podium spot,” he said after the race. “I really focused on my starting technique this week during my training.” Musquin’s third place finish moved him to third overall in the point standings. With three rounds remaining in the West Lites, Musquin is only seven points shy of second place.

Also strong in the Angel stadium track was Australia’s Matt Moss of JDR J-Start KTM who converted a poor start in the Lites category into a remarkable race as he recovered to cross the finish line in seventh place. While Moss conceded he wasn’t happy with his starts he still has bigger plans for the series. “I am happy with how I rode through the pack and the passes I was able to make. Next week I need to improve my starts and battle in the front of the pack at the beginning of the race,” he said. Teammate Ryan Marmont finished in seventeenth place and now returns to Australia to prepare for the outdoor national series. 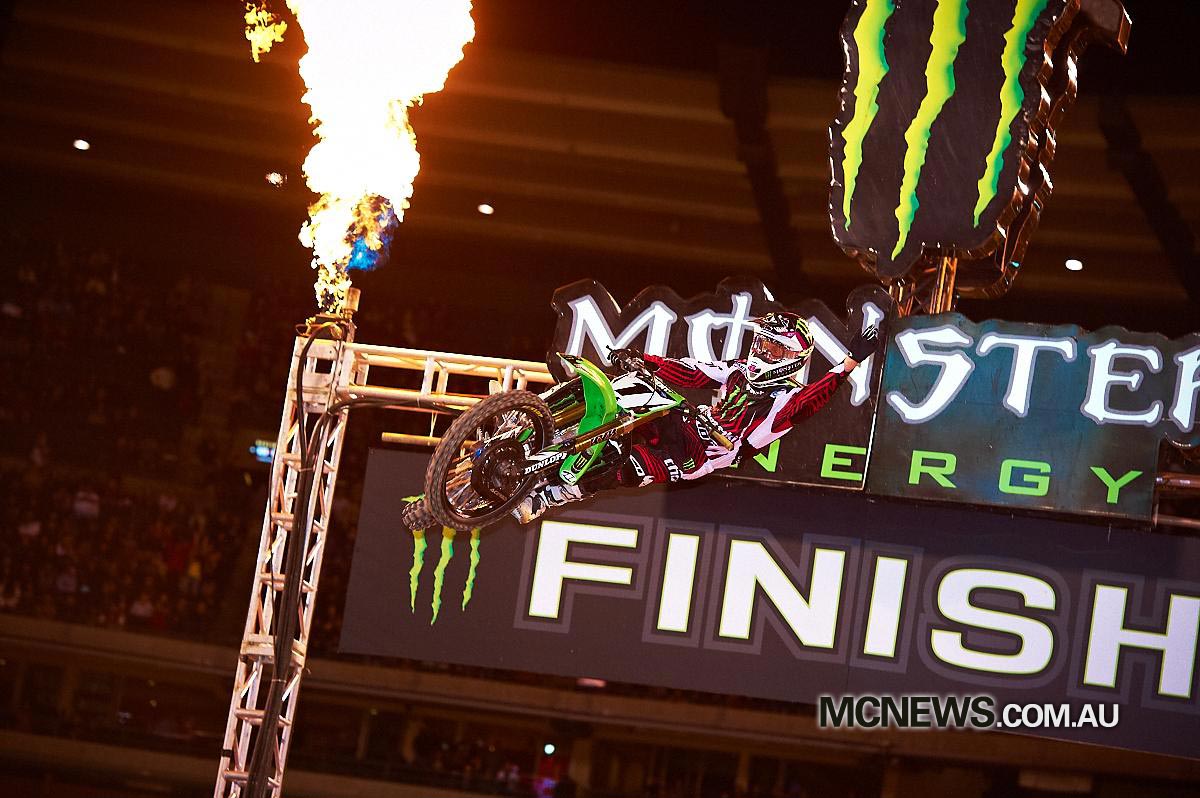