1000cc action on track at Sepang sees Lorenzo on top

1000cc action on track at Sepang sees Lorenzo on top

The first Official MotoGP™ Test of 2012 kicked off in Malaysia today with Jorge Lorenzo leading the timesheet at the end of day one, while World Champion Casey Stoner sat out the first day of testing after injuring his back while warming up for his first ride.
After two months off the track, the MotoGP paddock was back in action as the first official Test of 2012 began at the Sepang International Circuit. In attendance were the factory teams getting underway with development work on the new 1000cc bikes in addition several new teams contesting MotoGP CRT machines.

A damp track in the morning had the riders waiting to make first contact with the asphalt, until the late morning when all but Casey Stoner made the first laps aboard their 2012 machines. Leading the pace for the first half of the day was Factory Yamaha’s Jorge Lorenzo, who then completed the day on top with a fastest lap of 2’01.657 aboard his new YZR-M1, 0.346s faster than closest rival Dani Pedrosa.

Lorenzo’s team-mate Ben Spies completed the day with the fourth fastest time of 2’02.234, and tomorrow the Yamaha pair will continue development work on a new electronics package in addition to testing new parts.

While current World Champion Casey Stoner sat the day out after injuring a muscle in his back warming up in preparation to ride, team-mate Pedrosa tested the new Bridgestone tyres as well as working to set up the chassis of his RC213V, which has been developed to his specifications. The number 1 plated machine did make it to the track for four laps at the hands of Honda test rider Kousuke Akiyoshi, and Stoner did remark upon inspecting his new ride that changes made to the bike since the test in November were impressive.

With the aim of only getting familiar with the Monster Yamaha Tech 3 motorcycle, Cal Crutchlow completed the day third fastest in the field with a time of 2’02.221, just over a tenth of a second quicker than Valentino Rossi at the controls of the new Ducati GP12.

Rossi completed 43 long anticipated laps aboard the completely redesigned Desmosedici, to post a best time of 2’02.392. Today was the first public appearance of the new machine, upon which team-mate Nicky Hayden gathered his first impressions while lapping into 10th fastest spot of the day with a time of 2’03.151.

Andrea Dovizioso made his focus of the day on riding with his newly plated collarbone and working on engine management, and the Italian faired well, placing his Monster Yamaha Tech 3 machine sixth for the day, three tenths behind compatriot Rossi.

Héctor Barberá followed in the times putting in a lap of 2’02.773 on board his Ducati GP12 of the Pramac Racing team, while Alvaro Bautista completed his very first day of testing the San Carlo Honda Gresini Team bike to rank just fourth hundredths behind Barberá.

MotoGP rookie Stefan Bradl on the LCR Honda finished a day of familiarizing himself with a MotoGP bike at 11th fastest, a half second behind Hayden. The Moto2 World Champion was a tenth of a second ahead of Karel Abraham, whose focus on the Cardion AB Motoracing Ducati was on set up and tyre testing.

CRT development progress continued, with NGM Mobile Forward Racing’s Colin Edwards putting in 12 laps on the BMW-Suter, with much of his time going into electronics development. The Texan paced ahead of Avintia Racing rider Iván Silva, who also made 12 laps, while test rider Jordi Torres completed 42 laps at the controls of the BQR-FTR machine. 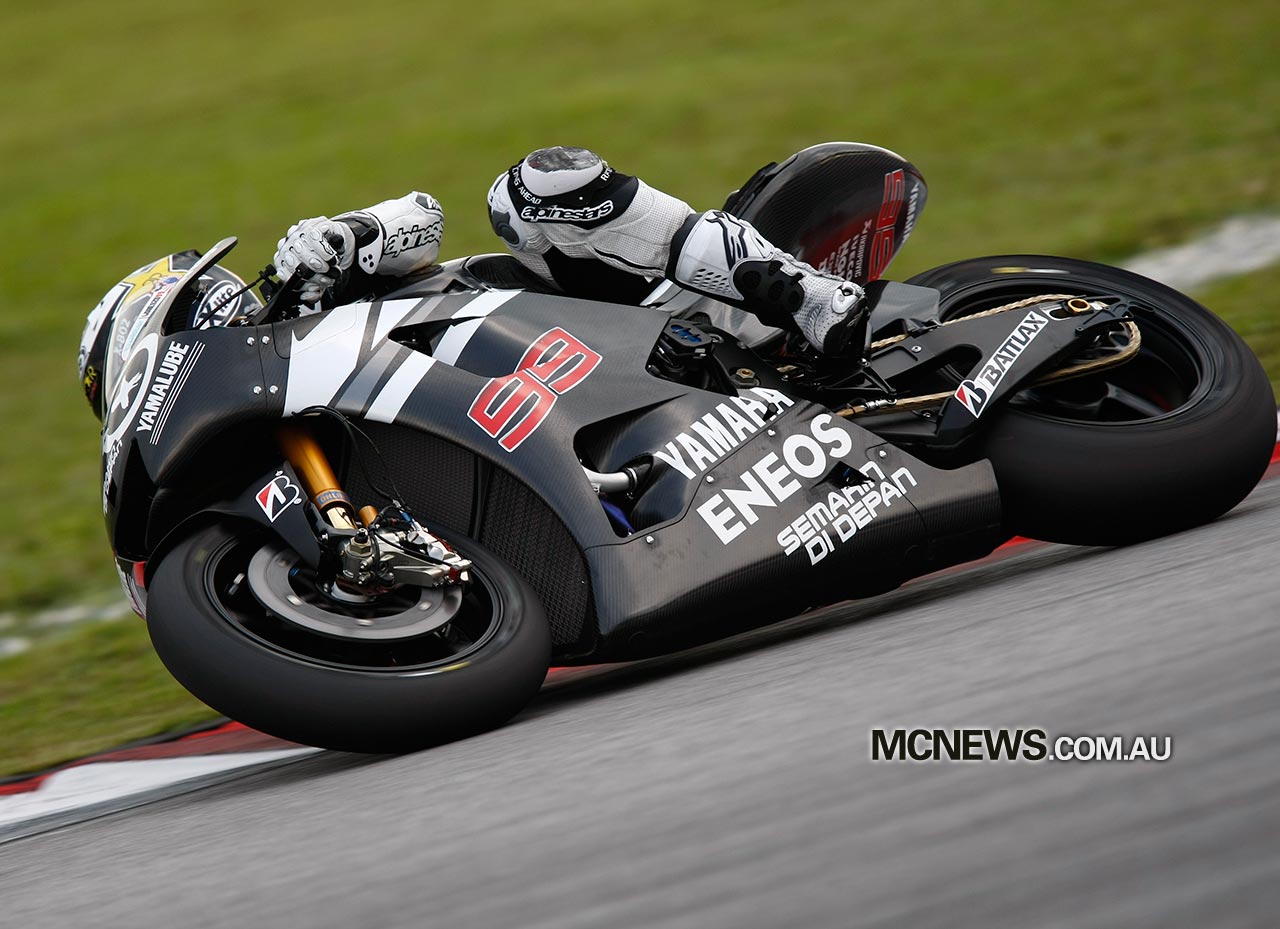 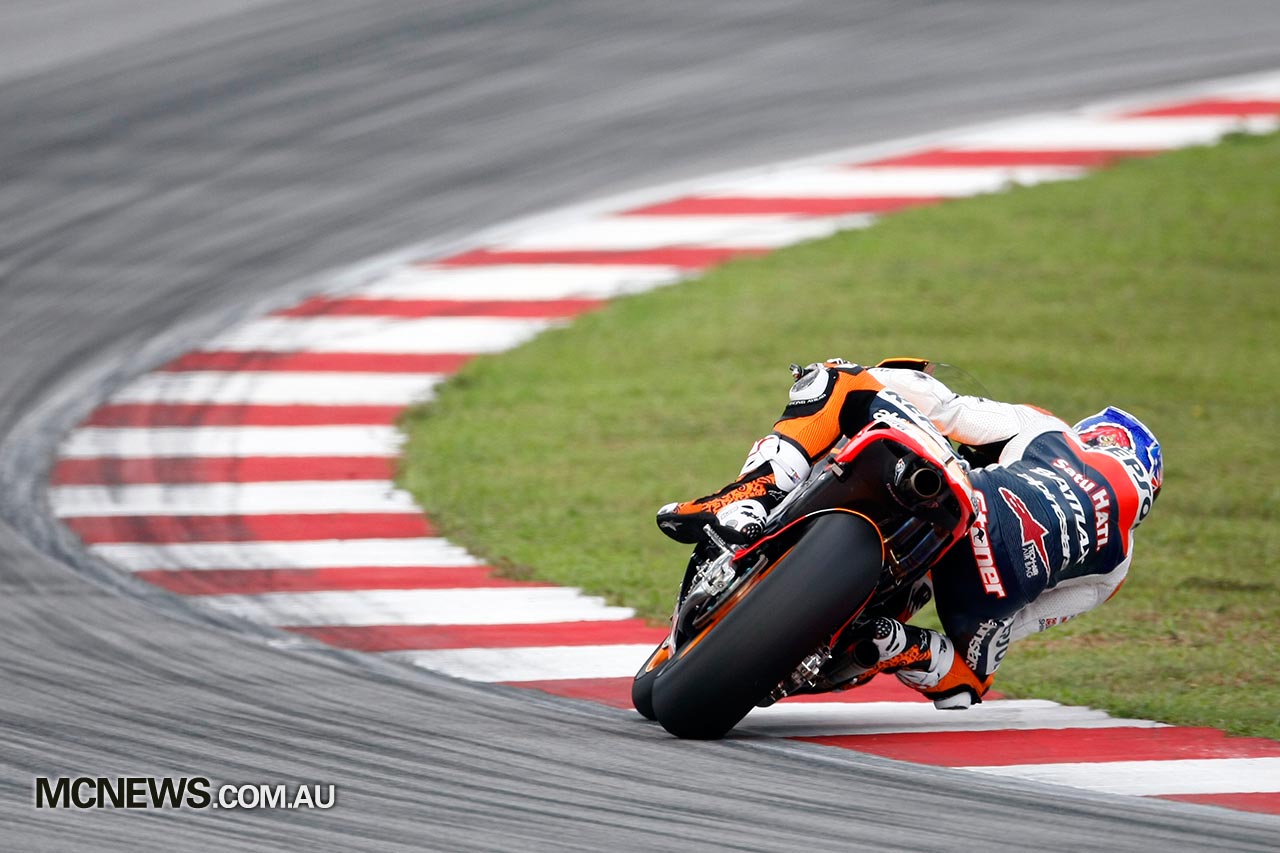