Eli Tomac stretches lead with another 1-1 at Washougal 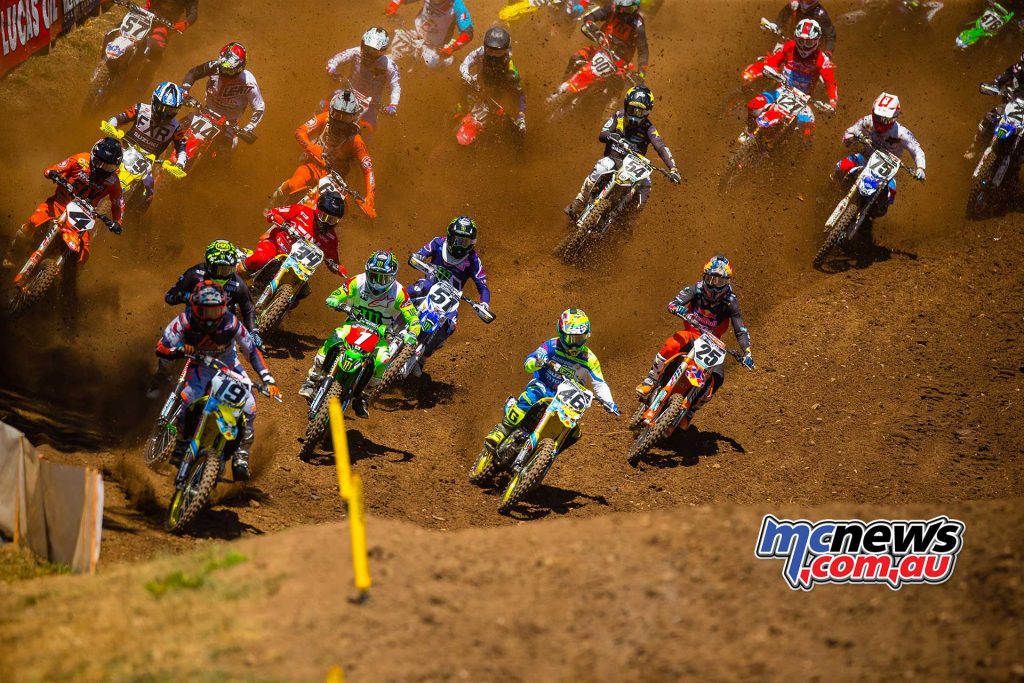 As the riders came around the first turn, it was a pair of Suzukis and a pair of Kawasakis leading the way. Justin Bogle (who now has five holeshots in seven motos), Justin Hill, Josh Grant (who is making his season debut) and Eli Tomac made up the top four. As Bogle held on to lead the first official lap of the race, Tomac moved up to third and Justin Barcia dropped a bunch of positions after going down.

While Tomac struggled to get around Hill for second, Marvin Musquin caught up to the lead trio and joined the fight. Five minutes into the moto, Tomac finally passed Hill and then set his sights on the race leader. All told, Bogle led a total of three laps before eventually succumbing to the hard-charging Tomac.

Then it was Musquin’s turn to deal with the JGR duo of Hill and Bogle. With 22 minutes left into the moto, the Frenchman put himself into second place behind Tomac but was already facing a three-second deficit.

Ken Roczen cracked the top three after making his own passes on Bogle and Hill, but Tomac and Musquin were long gone by th point. Bogle’s slide continued after he went down on Lap 6 and fell back to 12th place. Since returning from injury a few weeks ago, Bogle still has yet to record a top-10 moto finish despite repeatedly getting the holeshot.

Tomac, Musquin and Roczen basically got to run their own races for the rest of the moto. Once they all hit the top three, none of them were feeling (or applying) any pressure, so they ended up going 1-2-3. For Tomac, it’s his third straight moto win and he’s now won 12 of the season’s 17 motos thus far.

Hill matched the best result of his brief 450 Class career with a fourth-place finish. It’s the third time this season that he’s finished in that position.

Round Nine – Washougal – 450 Moto One Results

The race started with yet another holeshot from Justin Bogle, but he gave up the lead to Ken Roczen after just a few turns. The quick ride to the front gave Roczen an opportunity to open up some ground with Eli Tomac buried further back in the pack thanks to a bad start, while Bogle once again faded backward over the next couple laps. 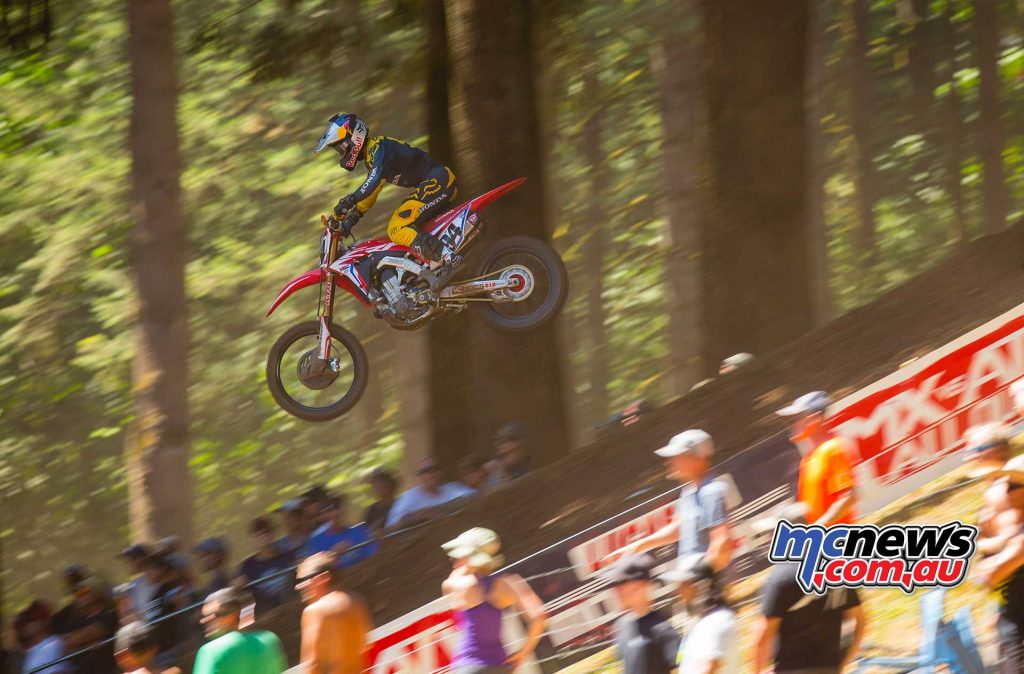 After three laps, the running order was as follows: Roczen, Justin Hill, Marvin Musquin, Justin Barcia, Tomac. Hill held off a charging Musquin for as long as he could but ultimately gave up second place to the Frenchman. Meanwhile Tomac was finding it difficult to get around Barcia. Eventually the Monster Energy Kawasaki rider came flying off a downhill jump and took an inside line to pass Barcia. Thanks to a crash from Hill, Tomac got up to third place before tipping over in a corner and allowing Barcia to get back around him.

After the aforementioned shakeups, it was Roczen, Musquin, Barcia, Tomac and Blake Baggett composing the top five. Musquin was running just a few seconds behind Roczen, but the rest of the field was more than 10 seconds back of Musquin. But once Tomac got around Barcia a second time, he started throwing down fast laps and catching up to Musquin. With five minutes left on the countdown clock, Tomac had reeled in Musquin and went to work, eventually passing him in the whoops after some good side-by-side racing.

That pass put Tomac in position for the overall win, but he had more than that on his mind. He quickly erased Roczen’s gap and was showing a wheel to the race leader with three laps to go. He then charged through the whoops and scrubbed the finish line to jump to successfully pass Roczen for first place. Now in the lead and being saluted by the crowd, Tomac survived the final two laps to officially complete the impressive come-from-behind win. Roczen, Musquin, Barcia and Baggett made up the rest of the top five.

The victory gave Tomac his 13th moto win and seventh overall win of the season. Five of his seven overall victories have come in the form of 1-1 sweeps.

Because of his better finish in Moto 2, Roczen (3-2) beat out Musquin (2-3) for second place overall behind Tomac. More importantly for Musquin, he lost another eight points to Tomac in the battle for the 450 Class championship. Tomac more than doubled his lead, from seven points to 15, over the course of the day at Washougal. With three rounds still left to go, that lead is far from insurmountable though.

Notably absent from Moto 2 was Josh Grant. After a 10th-place finish in Moto 1, he did not line up for the second moto.

Cody Cooper had improved on his P17 in the opening moto to finish 11th in the second moto and is 11th in the championship points standings on 121 points.

Round Nine – Washougal – 450 Round Overall

A pair of Kawasakis led the field out of the first turn, with Joey Savatgy taking the holeshot and Austin Forkner running just behind him. Dylan Ferrandis was making moves to get into the top five on the opening lap but then went down and lost quite a few positions.

At the end of two laps, it was Savatgy, Forkner, Jordon Smith, Michael Mosiman and Aaron Plessinger making up the top five. Mosiman, who’s coming off a career-high moto finish (6th) last week at Spring Creek, nearly crashed after making a mistake on a jump but somehow managed to save it. The bobble did allow Plessinger to get around him for fourth place though. One lap later, the top four riders (Savatgy, Forkner, Smith, Plessinger) were separated by less than two seconds.

The battle up front remained close, with the top three riders pulling away just a bit from Plessinger. Shortly before the midway point of the race, Forkner finally found a line inside of Savatgy that allowed him to move into the lead. It looked like Smith would also get around Savatgy for second place, but Savatgy was quickly able to come right back and retake the position. Meanwhile Plessinger closed back in on the pack.

Although the action settled down a bit over the next few laps, it heated back up with five minutes to go. That’s when Savatgy caught back up to Forkner and was all over him. Savatgy continued to apply pressure until eventually going inside of Forkner with an aggressive (but clean) pass to retake the race lead.

Trying to come right back, Forkner got side-by-side with his teammate, but Savatgy was able to hold him off.

Savatgy held it together over the final laps to take his first moto win of the season. Not only was it his first victory, it was also the first time this year that he finished in the top three. With another win in the second moto, Savatgy would secure an overall victory for the first time since last year at Washougal.

Forkner finished in second place in Moto 1, while Smith landed on the podium for the second week in a row after holding off Plessinger for third.

Round Nine – Washougal – 250 Moto One Results

A trio of Yamahas got a strong start, with Aaron Plessinger taking the holeshot, but Shane McElrath was right up there with them. By the end of the first lap, McElrath had gotten around Plessinger and into the lead.

It was the opposite story for the podium finishers from the first moto. Joey Savatgy found himself outside the top 20 after Lap 1, and then his teammate Austin Forkner crashed hard on Lap 2. Forkner’s been the victim of bad luck recently, as he’s collided with another rider at some point during each of the last three rounds, but this time he crashed on his own. The end result is the same though — for the fourth straight round, he has one top-two moto finish and one bad moto finish, this time a DNF. The other podium rider from Moto 1, Jordon Smith, was outside the top 30 after the opening lap.

With those three riders all struggling in Moto 2, the door was open for Plessinger to win the overall. Tracking down McElrath for the moto win was a different case though. Not only was Plessinger unable to catch McElrath, he also had a little spill with about five minutes to go that caused him to lose a spot to his teammate Dylan Ferrandis. McElrath went on to win the moto by a comfortable 12-second margin, with Ferrandis taking second and Plessinger third.

Thanks to the inconsistency of other riders, Plessinger’s 4-3 moto results were enough to earn him the day’s overall victory. It’s AP’s fifth overall win of the season and his third straight, but it’s his first win that didn’t come by virtue of a 1-1 sweep.

McElrath’s moto win was the first of his career, and it comes just a few weeks after he scored his first overall victory (even though he didn’t win either moto on that particular day). His 9-1 moto results were enough for second place overall today at Washougal.

Savatgy managed to earn the final spot on the overall podium after battling back in Moto 2 to finish ninth. His 1-9 results matched McElrath’s performance, but McElrath won the tiebreaker thanks to his better result in the second moto.

One rider whose name was not mentioned much today was Alex Martin. His 8-6 moto finishes made for one of his worst days of the season, as he finished sixth overall and lost 10 more points to Plessinger in the championship race.

Aaron Plessinger now holds a 59-point edge over Martin with three rounds left to go. Although it’s not likely to happen, it’s still mathematically possible for Plessinger to clinch the 250 Class championship as soon as the next round.

Hayden Mellross had some problems in the opening moto but finished 20th in the second and is now 25th in the championship on 32 points.

Round Nine – Washougal – 250 Overall Round

Hi-res images from Pro Motocross Round 8 at Washougal