#DutchTT according to Boris | A Cathedral Full of Gods

A CATHEDRAL FULL OF GODS

As much as I would like to offer you a blow-by-blow and pass-by-pass dissection of Assen, I can’t. It was one of those races you actually had to see. Me writing about it after the fact would do it no justice. There was just too damn much going on.

The Dutch round of the 2018 MotoGP was one of those immeasurably rare races we are privileged to see from time to time.

All the major players and a few of the important minor ones brought their Weapons-Grade dancing pants onto the dance floor last Sunday. No-one crashed, and everyone rode wickedly, brilliantly and with crushing intent.

Chris Vermuelen made a telling remark at the start of the race telecast on Foxsport. Assen, he observed and he would know, was the kind of track that didn’t often allow riders to make a big break on the rest of the field. Especially when the first 10 qualifiers were all separated by less than a second.

Qualifying and practice all pointed to an astonishing confluence of efforts. Sure, Marquez was once again at the pointy end. But immediately behind him and separated from him by mere hundredths of a second (and in the case of FP3 and Vinales, a mere 1/1000th of a second) was the whole cast of grimly determined challengers.

Rossi was right there, Crutchlow was damn close, Iannone was saltier than an anchovy, Dovizioso was fully aware of what the championship looked like with his recent DNFs, Vinales had remembered how to race a bike, and even Rins was ready to be noticed. Meanwhile, Lorenzo, who had been Lord of Everything the last two rounds, was also showing great pace, as was Petrucci.

If it did not rain, and it didn’t, it could well be a race for the ages.

The only climactic drama was a strong wind, but as I said, there were only three DNFs – Petrucci, Simeon and Abrams, so it’s not like anyone even noticed. Up the front, it looked like a Moto3 race up until two scant laps from the end.

Five different riders led the race – a vicious pass-fest of such primal intensity I was literally holding my breath for much of it and shaking my head in utter disbelief at the rest of it. 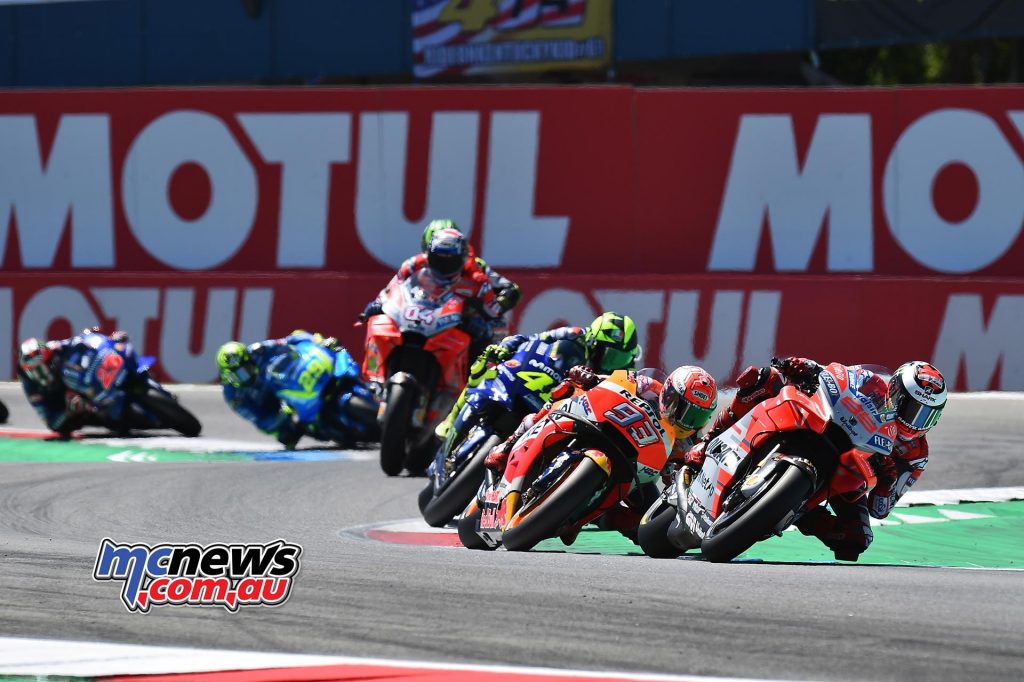 During a processional race it’s sometimes easy to overlook just how talented, committed, and razor-blade ruthless each and every one of these hyper-talented bastards actually is.

But what a race…hell, at an occasion such as Assen delivered last Sunday, it’s impossible to watch them and not be utterly unmanned at the sheer Himalayan majesty of motorcycle racing at this level. These are verily and incontrovertibly the greatest motorcycle racers on the planet and the show they put on was undoubtedly the finest motor-racing spectacle on offer. That dreary four-wheeled Formula One rubbish could take a lesson. 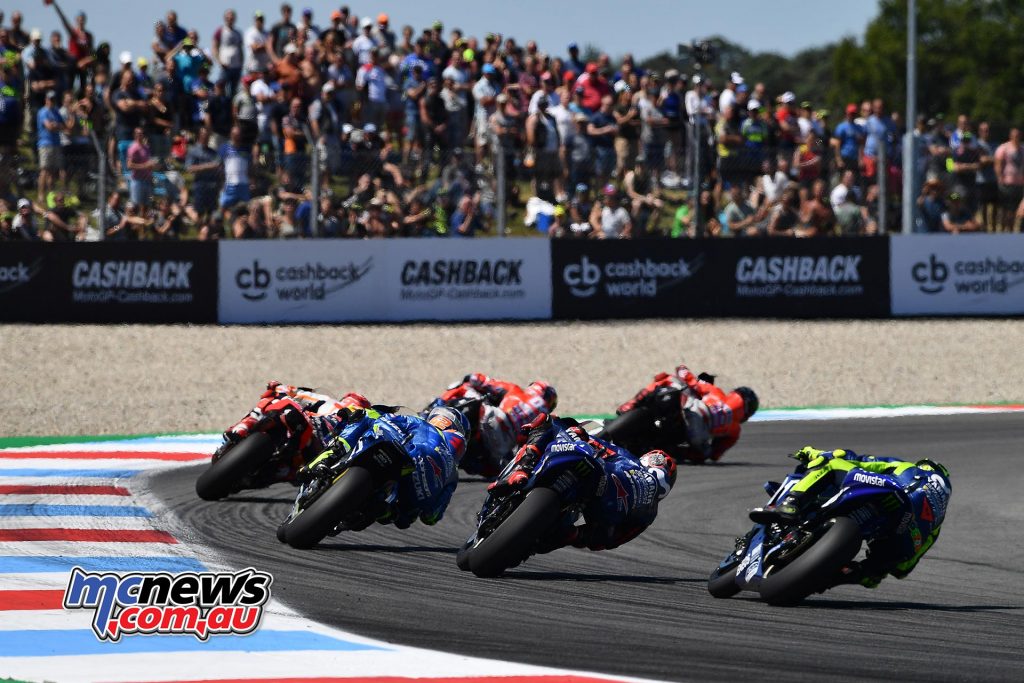 It was a race of such depth and complexity, you’d have to watch it three times to fully appreciate what went down. But for me the highlights were as follows:

Lorenzo’s stunning start was mind-bending. The Mamba, languishing in 10th on the grid, rode around the outside of everyone and found himself in first place. It was a magnificent display of prowess. And Lorenzo remained magnificent, pretty much up until he lost the front end, slowed, and copped a hard-charging Rossi right in the Ducati tail-piece. How neither of them crashed is one of those insoluble race-mysteries.

Vinales’ laser-beam intense charge towards the lead and his subsequent defence and then loss of his position was astonishing. 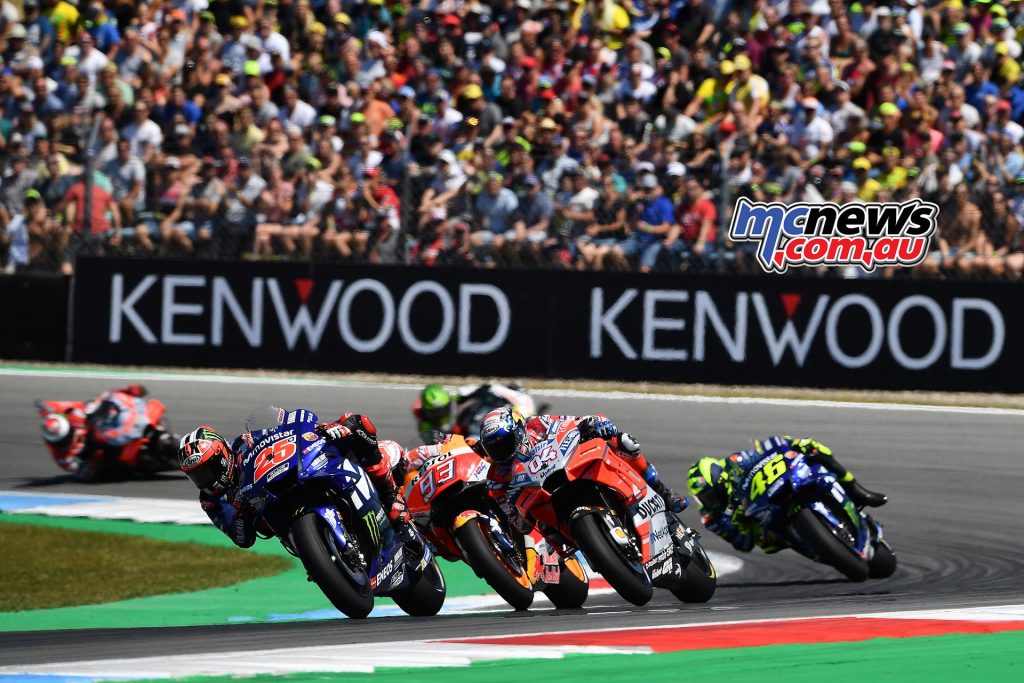 But that’s what was happening at the front with all of them. Marquez, Rossi, Vinales, Dovizioso, Rins, Lorenzo, Zarco, Crutchlow…all hacking and slashing at each other, swapping paint, leather dye and curses.

Rins passed Marquez so hard, Marc’s foot came off his peg and his knee hit the deck. But he somehow Marquezed himself back onto his bike and on the following lap, on the same corner, bitch-passed young Rins so hard I’m sure some of his seat-foam was missing at the end of the race. 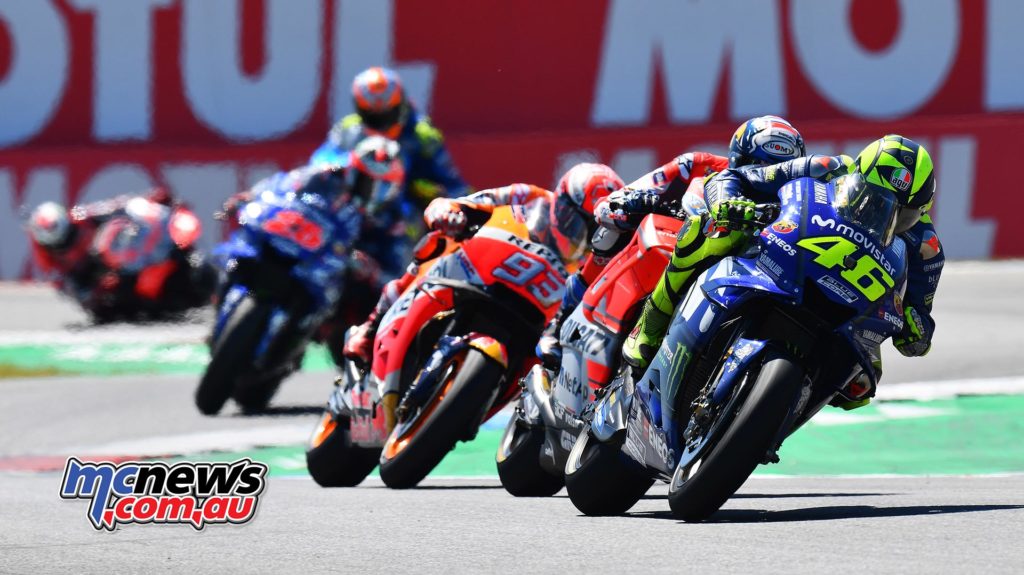 I was cross-eyed with awe at Rossi, who time and again at the famous Geert Timmer Boch chicane (the one leading onto the start-finish straight which sorts the goats from the sheep every year), would pass the rider in front. It was a move The Doctor had been practising in Practice all weekend, and he really had it down pat. I was actually convinced he was going to win – and up until he and Dovizoso went at it a few laps from the end, I reckon Rossi thought that too. But he overcooked Turn One defending it against Dovi’s Ducati. This cost him (probably both of them) a podium.

Up front, the youthful cream rose to the top. 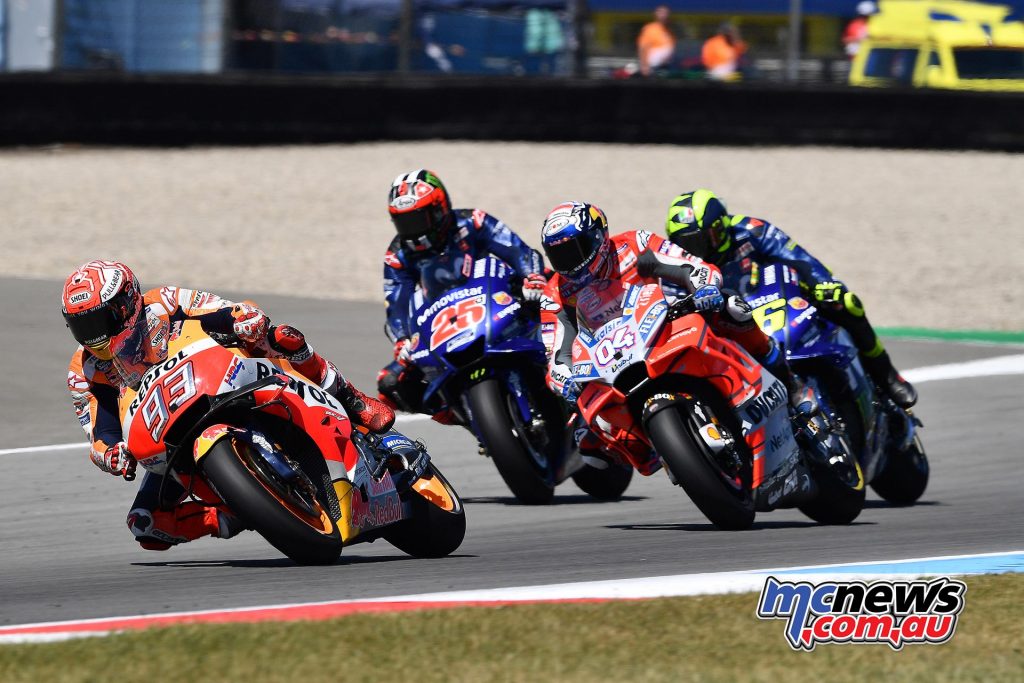 Marquez, who had been in the midst of some of the most brutal racing he’s seen since his time in Moto3, waited until two laps from the end, and then gave it everything he had to try and gap the rest. And Marquez’s everything is pretty special. He won by more than two seconds. 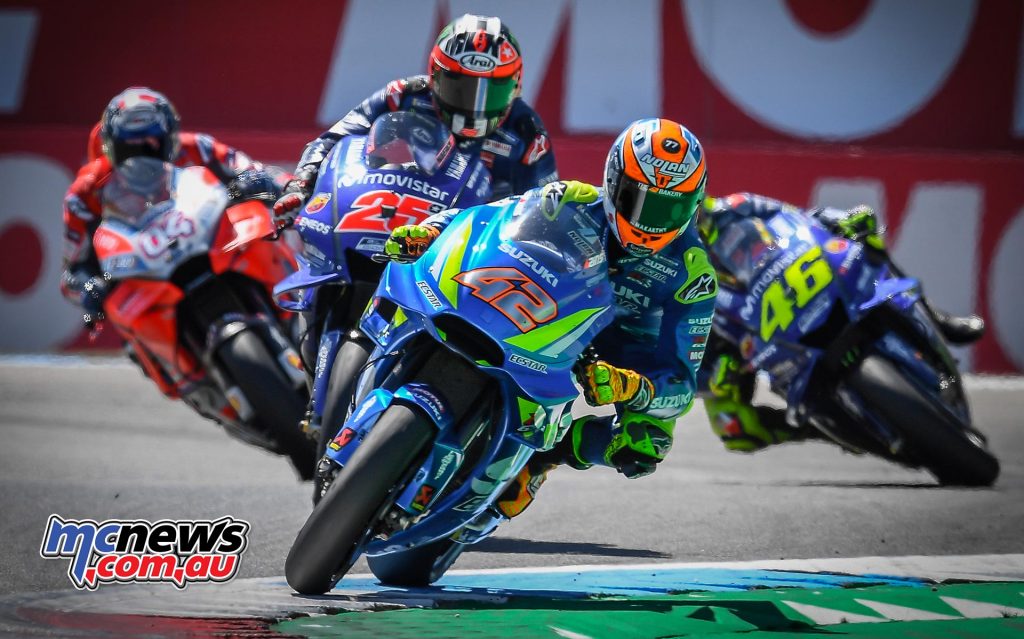 Behind him, Rins held off Vinales, Dovizioso and Rossi – all four of whom finished within a shrinking second behind him. Close is something of an understatement, and Alex Rins had every reason to act like he’s just won the whole championship. Vinales was clearly disappointed he didn’t win, but once again, no-one was going to catch Marquez. 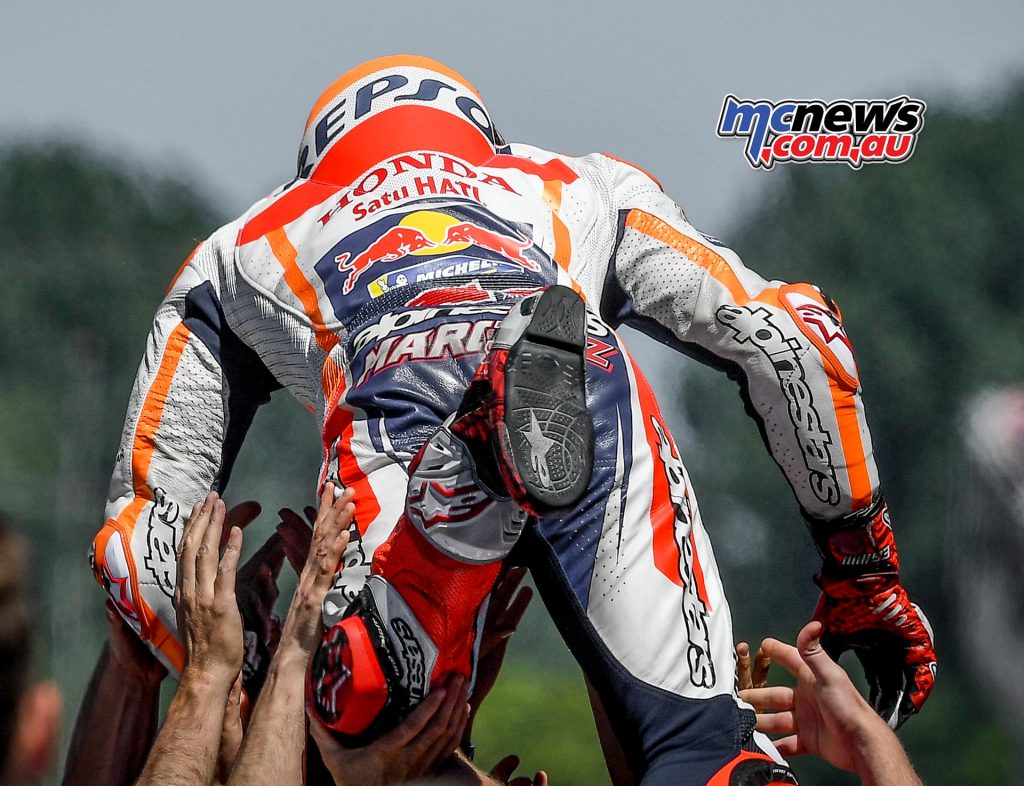 And that looks to be the case at Sachsenring next round. No-one’s caught him there yet.

Of course, it’s not a done deal for the championship yet. There’s still a long, long way to go. Chickens which have not hatched, must never be counted. But it’s probably OK to make a few bets before the odds go completely to shit. 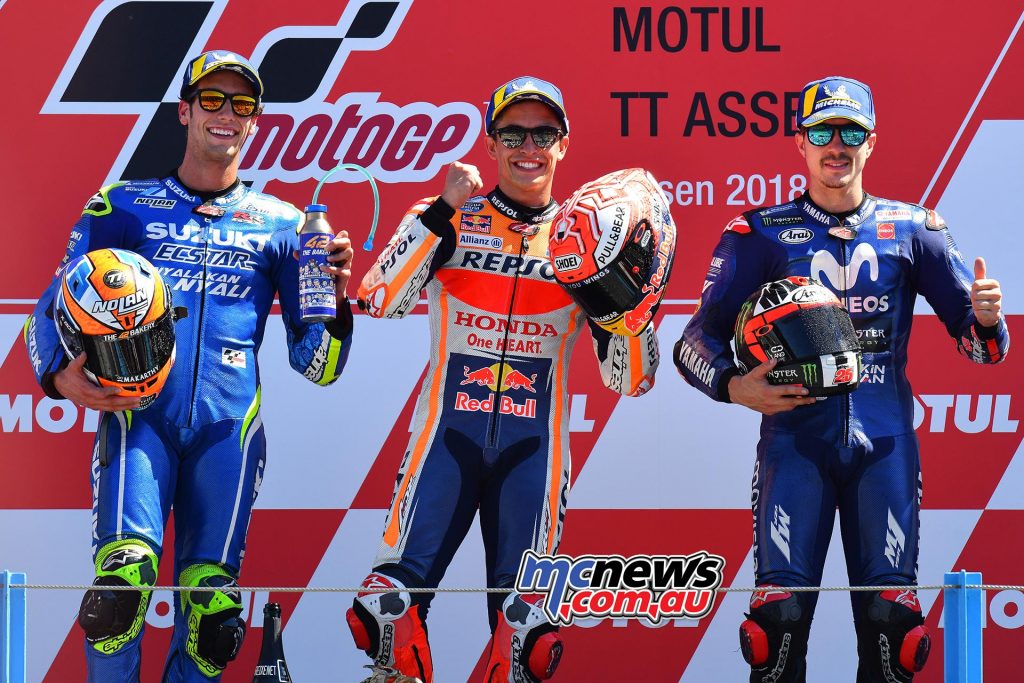 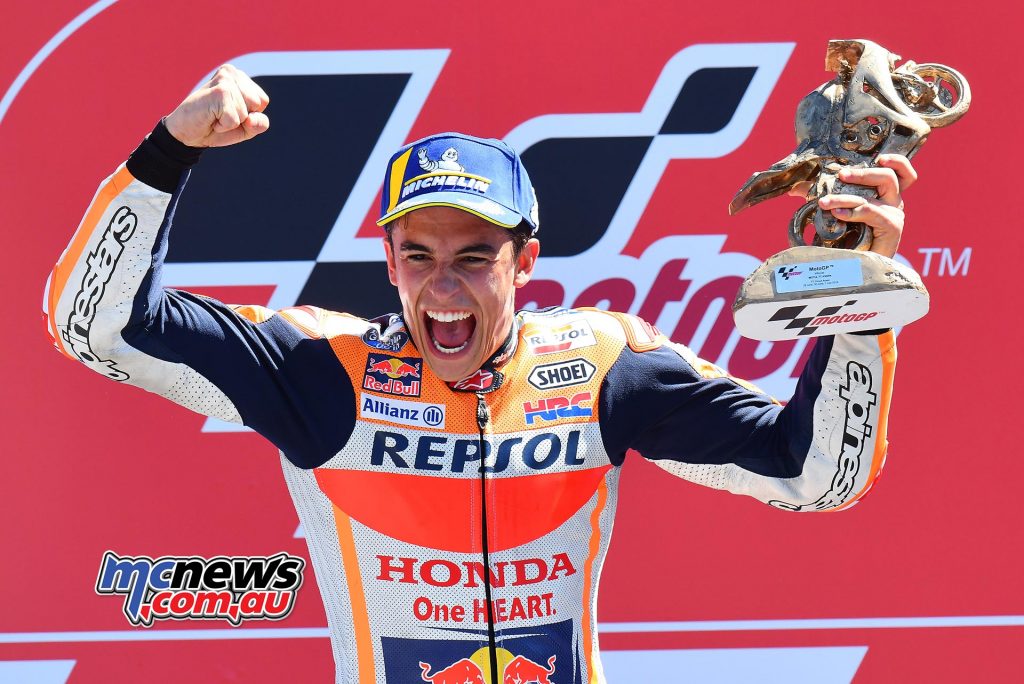