Boris on 2018 MotoGP Round Four at Jerez

Jerez only went to plan for one bloke. The current and quite probably 2018 World Champion, Marc Marquez, was once again waving at his home crowd on his last lap.

When you’re like an hour ahead of the bloke in second place you can do that. And you can also dance a bit on your bike as you cross the finish line, and your teeth can sparkle in the Andalusian sun, and it’s all back-slapping and champagne-hosing – even if one of the podium girls is a bloke dressed in Spanish national costume.

Behind Marquez it was both spectacular and mundane.

It all began like a gunshot in a church, ie. Completely unexpected, very exciting and a bit of an affront to God.

Jorge Lorenzo, the only rider on the grid to have shod his bike with a soft front tyre in the hope he could make enough distance on the others before it went off, speared into the lead from fourth on the grid.

Crutchlow, who is already world champion as far as he is concerned, went backwards from his hard-fought and spectacular pole position.

He then further demonstrated how he is “no longer a sixth-place rider” by crashing out three laps into the race, then re-mounting and riding a broken bike for a few corners before returning to the pits and glaring at two different doubting people at once.

The factory Yamaha blokes, Vinales and Rossi, were pretty shit once again, flubbing around in midfield as their bikes hated on the hot weather at Jerez.

The Hondas had been dominant in practice and qualifying, but the Ducatis had found something somewhere, and Zarco, as usual, was making a mockery of the factory Yamahas.

Iannone and Rins were also looking somewhat shiny on their Suzukis, but the race developed in a way no-one could have predicted.

Marquez waited a respectful five laps before passing Lorenzo on the corner named after Lorenzo, and in sight of the lake where Lorenzo went swimming all those years ago when the world was Lorenzo Land.

And then Marquez rode off. So that was that as far as he was concerned.

All of which is pretty normal.

And then Marquez blew everyone’s mind by somehow not crashing on the gravel thrown onto the track by Luthi’s cartwheeling bike. Instead of also crashing, Marquez hit the gravel keeled over at Warp 7, skidded sideways for a few metres and looked for all the world like he was about to highside himself all the way to Mars, then righted it all and carried on as if nothing had happened. Because in his world nothing out of the ordinary did happen. It was an astonishing display of skill in what has become an endless and ongoing list of “How the hell does he do that?”

So by Lap 17, Marc was more than two seconds ahead of the hard-charging group of Lorenzo, Dovizioso and Pedrosa, with Zarco flubbing around three seconds further back. Five seconds further behind Zarco, Iannone was keeping Petrucci, Rossi and Miller at bay.

But it was clear Lorenzo was charging a bit less hard than his pursuers. He was manifestly holding up Dovizioso. And it was clear Dovizioso needed to get past his team-mate if he was to prevent Marquez from getting even further away.

Last year, it had been established that showing Lorenzo “Suggest Mapping 8” on his dash did nothing in terms of getting him to move out of his faster team-mate’s way. 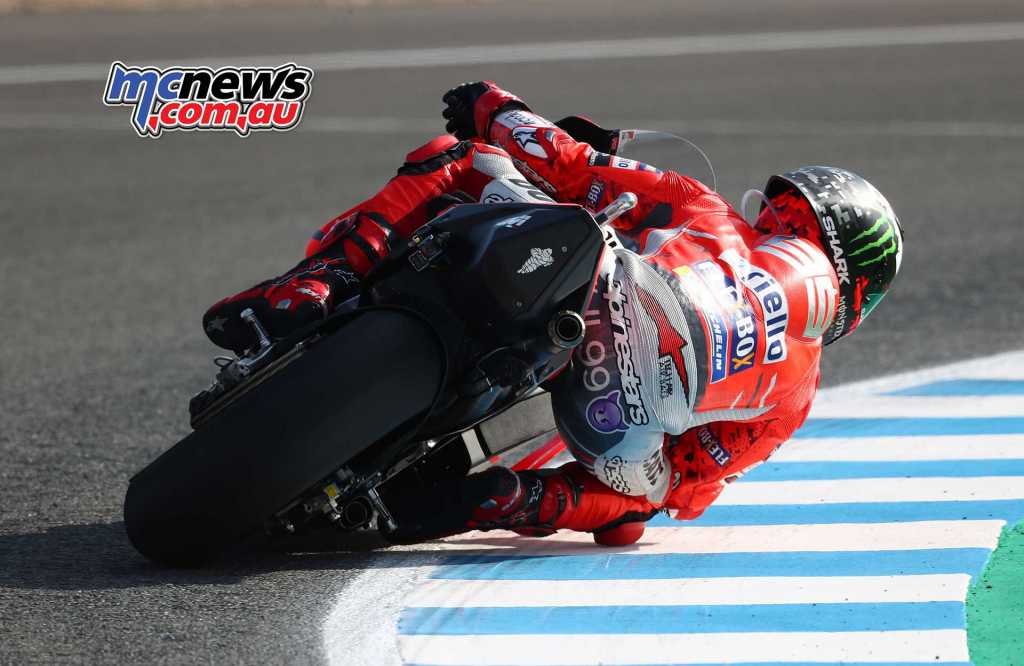 So no-one bothered this time.

Which is when it all went to shit.

Dovizioso, clearly completely out of patience, came past Jorge on the inside coming into Dry Sack corner. But he was too hot and ran it wide. This allowed Lorenzo to come back up the inside of Dovi mid corner, and as Lorenzo hit the apex, he didn’t see a hurtling Dani Pedrosa coming up on the inside of him. Except he did, right at the last second. It was too late. Lorenzo tried to stand his Ducati up, but hit Pedrosa and launched him into space, then took out Dovizioso as well.

Dovizioso waved his Italian arms at Lorenzo in the gravel, Lorenzo shrugged his Spanish shoulders back at Dovizioso, and Dani wondered how many mirrors he’d broken in his life to explain his run of bad luck.

And that was pretty much that.

Marc sailed off to an unassailable lead. Zarco got to ride around by himself in second, and there was a bit of action for the last step of the podium between Petrucci, Iannone, Miller and Rossi.

Iannone proved to be the more committed, while Petrucci managed to fend Rossi off, who showed Miller that even fifth place does not come easily in MotoGP.

Vinales’s strange season continues and he arrived home in seventh, just ahead of Bautista and Morbidelli, who benefited greatly, as they all did, from the big crash.

All except Marquez. He didn’t benefit from the big crash.

His benefits come entirely from another place. A place no other racer can currently approach.

This year he is happier on the Honda, the Honda is happier with him, and it’s starting to look like another Marquez whitewash after only four races.

We are two weeks away from Le Mans.

You’ll struggle to find a bookie that will offer you any decent odds on Marquez crushing all before him in France.