MotoGP to hit Misano this weekend | Rossi the favourite..?

MotoGP returns to Italy this weekend, to the Misano World Circuit, with the standings still reflecting the end result of the Austrian GP, after Silverstone saw no racing, leaving Marc Marquez the Championship leader, and Valentino Rossi a local favourite heading into Round 13.

Marquez boasts a 59-point lead, and those gunning to cut down his lead will be hoping to whittle away at that gap. More than two race wins clear in the points is a prime position with seven rounds remaining, but it’s still anyone’s game at this point.

For Rossi – the man with a good record on home turf and the man closest in the standings – it would be a glorious homecoming. Without a win since Assen last year, the drought continues for the Italian and for Yamaha, who also lost out on the chance to race at Silverstone – a venue they’d had good pace at in the dry.

It’s not just yellow that’s the home colour, however. The red of Ducati will also be a home favourite, especially for Italian Andrea Dovizioso. ‘DesmoDovi’ hasn’t ever won at the venue, but now would be a good time to start. Between him and teammate Jorge Lorenzo, it’s just one point – so it’s not only home glory on offer, but also a chance to hit back in their rivalry.

Lorenzo on the other hand has one of the best records at Misano and won in 2007 in the 250 World Championship before three second places in MotoGP and then three premier class wins in a row. That’s a record he’ll want to add to and after winning this season at another of his talisman venues – Mugello – the signs could be good…

Maverick Viñales wants to gain back ground though, and Danilo Petrucci is racing at home and wants to pull ahead in his first for top Independent Team rider against Cal Crutchlow and Johann Zarco. Zarco was back on the front row at Silverstone.

“Misano is a small track compared to Silverstone and we should have good weather there. I think there were quite some riders who tested there before, which will make my job a little bit harder to be close to the top and to be able to fight for the best five positions. I would like to be there, it will for sure be complicated, but I still believe I have the chance. I was so happy with the first row in England, so we can try to be back in the front row again in Misano, which is a track I like and I have some great memories, especially from Moto2 and I know that the Yamaha holds the fastest lap record with Jorge Lorenzo’s pole position two years ago. So, there are many possibilities for our bike and me, I will give the best as usually and try to be ready for a good race.”

Aprilia Racing Team Gresini’s Aleix Espargaro and Scott Redding have home team glory to go for too – and Andrea Iannone is another with a lot to race for. Dani Pedrosa could be an even bigger dark horse – having taken a stunning win in 2016.

Australia’s Jack Miller also sits in 12th place in the standings, and will be looking to close in on Rins and Pedrosa, who hold a five-point lead.

Tito Rabat (Reale Avintia Racing), meanwhile, is back in Barcelona after his crash at the British GP and subsequent surgery, with a long road to recovery ahead.

The Misano circuit is a track that involves particular attention to make a fast and smooth lap over its 4226m distance and through its six left- and ten right-hand turns. The layout has a long and fast sweeping curve, with slower turns and high-speed corners mixed together over a track that has a medium abrasive surface.

These particular demands lead to a circuit that needs a range of tyres to cope with the technical stresses and the Michelin Power Slick tyres for this event have been selected to match those requirements. The soft, medium and hard front tyres are all symmetrical, with the rears all asymmetrical and featuring a harder right-hand side to manage the extra turns that go in that direction.

“After everything that happened at Silverstone and here in Misano last year, we are hoping for some better weather in Italy this week. Misano is a demanding track that can create quite high temperatures from the rubber, especially on the front tyres as the bikes spend a lot of time leant over, so we need to have compounds which meet these demands. In 2016 we had a very impressive performance here on our return and we hoped to improve on that in 2017, but the weather had other ideas, that said though, the rain tyres performed really well in quite difficult conditions on a low grip track in the wet and we saw an exciting race. We hope that the bad weather won’t play a part again this season, but no matter what, we are ready!” 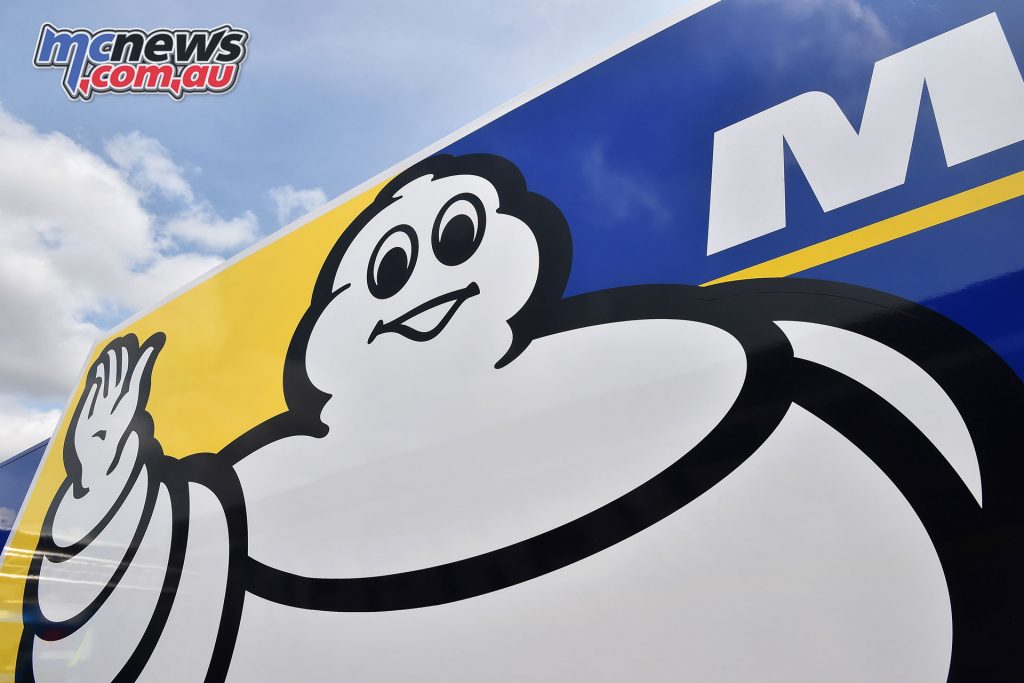 The Misano circuit has been a venue for motorcycle Grand Prix races since 1980 and a continual fixture since 2007. It has the title of the San Marino GP – after the small Republic in Italy – and is an event that has also been staged at Mugello and Imola, before finding its home at Misano.

Situated in close proximity to the seaside resorts of Rimini, Riccione and Cattolica, all of which are highly regarded by sun-seekers, the Misano World Circuit Marco Simoncelli can also be susceptible to wet weather, as was experienced last year, so the Michelin Power Rain tyres will be offered to combat such conditions.

These tyres will be offered in soft and medium symmetric front and an extra-soft and soft rear. The extra-soft rear will be a symmetric finish, while the soft will have an asymmetric design with a harder right shoulder.

Francesco Bagnaia took the points lead in Austria, but it’s by just three points – so will that prove a magic number as we head for Misano? The stakes will be high for Bagnaia to increase the advantage, with the paddock now headed onto his home turf.

For Oliveira, meanwhile, there are a few wounds to lick following Silverstone. The qualifying struggles that earlier plagued the Portuguese rider looked to be behind him but in the UK they were back and he had been set to line up outside the top twenty. Although there was no racing on Sunday, that’s something to think about.

Luca Marini is another man to watch, racing, like teammate Bagnaia, on home turf and retaining his roll. He’s one of only two riders across all classes to have taken a podium in the last three races. He’s been all-in even without the added motivation of racing at home.

Alex Marquez could also be a threat as he continues his search for his first win of the year, and Sachsenring winner Brad Binder, Catalunya winner Fabio Quartararo and Joan Mir can’t be counted out.

That said, there are more home heroes who will do anything to get in their way. Mattia Pasini and Lorenzo Baldassarri will have their sights set on nothing short of glory, and for Baldassarri it’s the scene of one of his most impressive races when he dueled Alex Rins and took his maiden win in 2016.

Jorge Martin’s ride through the pain barrier in a superhuman performance in Austria left him only 12 points behind winner Marco Bezzecchi, but despite the extra time to recover for Silverstone, it was nevertheless going to be a challenge.

With tools downed after the conditions proved impossible to race in, however, everyone is left pressing reset for the Gran Premio Octo di San Marino e della Riviera di Rimini – and Martin has a little more time to recover before there are points in play.

He’d taken pole at Silverstone in another impressive display too, but now it’s home turf for Bezzecchi and key rival Enea Bastianini. Bezzecchi wants win number three of the season and Bastianini took his maiden win at the venue so knows he has some serious pace there – with some serious glory up for grabs if they can get the job done at the Adriatic venue. In contrast though, that also means that a victory for Martin would likely taste even sweeter…

Then there’s Fabio Di Giannantonio, another home hero who’ll be hunting for glory and shouldn’t be underestimated, and Aron Canet – another in enemy territory looking for that to give him an extra push of motivation. They both lost out big in the points race in Austria too, and need to fight back as the rounds remaining tick down.

Away from the squabble at the very top though, there are many more names who could get in that battle and one team who will be pushing particularly hard are SIC58 Squadra Corse. For the team, run by the late Marco Simoncelli’s father Paolo, it’s the most important weekend of the season – raced as it is around the track named in honour of the late Italian, at Misano World Circuit Marco Simoncelli.

Mugello turns on the magic for MotoGP | What a race!