Rossi P4 and seventh in championship

2018 MotoGP – Round Three – Circuit of the Americas

Marc Marquez (Repsol Honda Team) took the win in America and Andrea Dovizioso (Ducati Team) inherited the Championship lead as Texas shook up the standings, with a fifth place leaving Dovi a point ahead of the round winner. That makes five riders within eight points at the top of the title fight, including Maverick Viñales (Movistar Yamaha MotoGP) moving up to third after a second place finish at COTA.

The Americas GP also made it back-to-back podium finishes for Suzuki, with Andrea Iannone (Team Suzuki Ecstar) putting in an impressive push from the front row to take third and his first rostrum finish of the season – and first rostrum with the Hamamatsu factory. 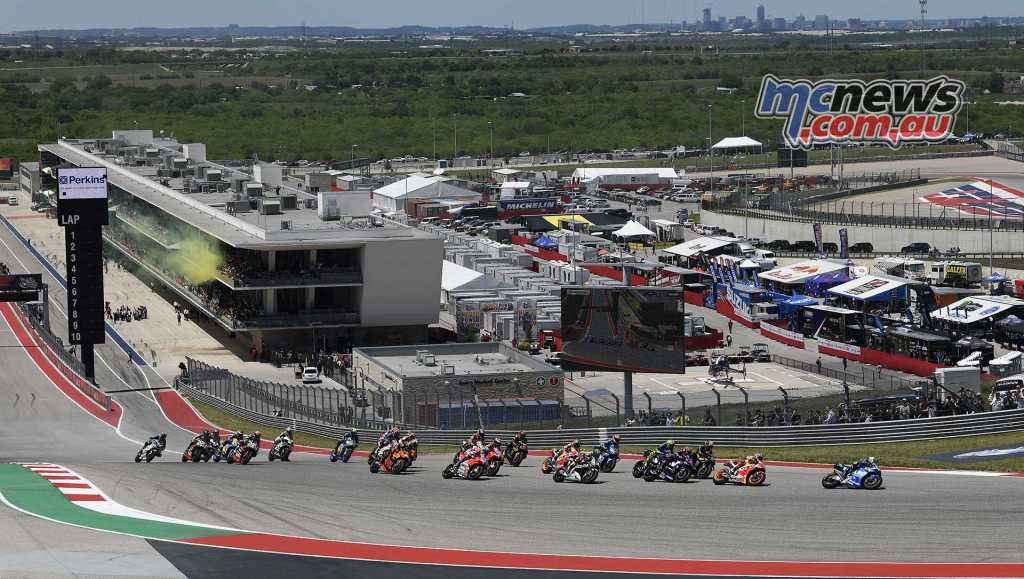 It was also Iannone who got the holeshot from second on the grid, but Marquez also got a stunner from Row 2 – slotting into second and on the chase behind the ‘Maniac’.

Making his move soon after and taking the lead, the number 93 started to pull a gap – but Iannone wasn’t done, and gave it everything for a late dive up the inside of the reigning Champion. Running a bit wide on the exit, Marquez took him back – then put his head down.

Behind, however, it was getting pretty tight. Valentino Rossi (Movistar Yamaha MotoGP) was pressuring teammate Viñales for third as Iannone held firm in second. But lap-by-lap, Viñales was able to ease away and stake his claim on P2 – closing in on Iannone before a well-judged pass into Turn 1 saw the Spaniard able to get through and then pull away. Keeping it calm, he took his first podium of the season in second, and Iannone did the same in third.

Rossi came home fourth, with Dovizioso taking fifth after a particularly difficult weekend. Well-rewarded for a solid race, the 2017 Runner Up is now the leader of the pack once again after his controlled performance, including a late race pass on Johann Zarco (Monster Yamaha Tech 3).

Zarco was top Independent Team rider in P6, with former Championship leader Cal Crutchlow (LCR Honda Castrol) sliding out at the final corner when attacking the Frenchman earlier in the race. Alex Rins (Team Suzuki Ecstar) also then suffered a tumble and went out of the race while Crutchlowwas  able to rejoin.

Meanwhile, Dani Pedrosa (Repsol Honda Team) followed up two stunning showings on Friday and Saturday to come home in a superhuman P7. Back on track and racing just over a week after surgery on his broken wrist sustained in the Argentina GP, the ‘Little Samurai’ rode a heroic push through the pain barrier around the punishing, technical challenge of the Circuit of the Americas in a performance worthy of the history books, taking home nine points ahead of the Championship’s return to one of his best venues: Jerez.

Aleix Espargaro (Aprilia Racing Team Gresini) completed the top ten, putting in an impressive push to keep Jorge Lorenzo (Ducati Team) behind him after a tough race for the five-time World Champion.

Now it’s time for packed grandstands, Spanish sun, the awesome Circuito de Jerez and one of the best atmospheres of the year – with the Championship so close, it’s sure to be a cracker.

Circuit of the Americas MotoGP – Round 3 – Race Results

Franceso Bagnaia (SKY Racing Team VR46) took a tremendous second victory of the season at the Red Bull Grand Prix of the Americas to take a ten-point lead in the Championship standings, grabbing the lead mid-way through the race from second place finisher Alex Marquez (EG 0,0 Marc VDS) after a battle royal.

The Spaniard saved a couple of scary moments during the race, but he still managed to hold off a late charge from third place man Miguel Oliveira (Red Bull KTM Ajo).

Marquez got the holeshot from pole position into Turn 1, with Mattia Pasini (Italtrans Racing Team) and Bagnaia tucking in behind the Spaniard from fourth on the grid. There was a slight tangle at the first corner, as Luca Marini (SKY Racing Team VR46) made contact with Joan Mir (EG 0,0 Marc VDS), who in turn tagged Dominque Agerter (Keifer Racing) – with Mir dropping to 24th.

Sam Lowes (Swiss Innovative Investors) then took a tumble early, the former winner at the track lowsiding out and able to remount but out of contention.

Marquez, meanwhile, pulled the pin in the early stages, with Pasini and race winner Bagnaia having a close battle for second, the latter getting through at the end of the back straight. The Italian veteran seemed to struggle to find grip in the early stages of the race – losing touch with Bagnaia and falling into the hands of a gaggle of riders behind, the first being Xavi Vierge (Dynavolt Intact GP).

In that gaggle were the two Red Bull KTM Ajo riders of Oliveira and Brad Binder, carving their way to join the battle, while Iker Lecuona (Swiss Innovative Investors) was also right in the mix. The battle behind Marquez and Bagnaia was in full swing, with Marcel Schrӧtter (Dynavolt Intact GP) leading the group before a nasty high-side coming out of Turn 1 ended his race.

Back at the front, Bagnaia got past Marquez on lap 13, before the scrapped it out and staged a stunning battle that saw them change places six times on the same lap – until the Italian managed to get past and keep it, then starting to pull away. Vierge then crashed out on lap 14, the German low-siding at Turn 19 in the battle for fourth – rider ok.

Marquez then had a huge moment at Turn 18 with a couple of laps to go, pushing hard to hold off the rampant Oliveira who was closing in a second a lap. There were fireworks also in the battle for fourth, with Mir, Lucuona and Binder scrapping – Mir making up 20 places after his first corner troubles.

At the front though, there was no stopping the number 42, who stormed to victory in the end by 2.464 seconds – with Marquez holding off Oliveira for second. Mir came home a stunning fourth, as Lecuona pipped Binder to the line for fifth and the South African had to settle for sixth.

Remy Gardner finished 17th, riding his Tech3 Mistral 610 machine into the top 20 after a tough weekend at the undulating 3.4 mile COTA track.

The result may not have added more points to Remy’s season tally but nevertheless there are positives, including a solid race pace that didn’t drop too much at the end. It’s also worth remembering that Gardner missed the 2017 event through injury.

“It was a tough race but I always knew it would be after missing last year. No points is disappointing but at the end of the race I had a good pace and I learned a lot in the later last laps which will help me in the next races. Mid way through I got eaten up by the pack and lost the group. The gap to leader was about 20 seconds which would have but me in or around 10th last year so we have to take the positives. Hopefully in Jerez we can recover some points in the championship so see you all there!”

Jorge Martin (Del Conca Gresini Moto3) took a stunning second win of the season at the Red Bull Grand Prix of the Americas to take back the Championship lead, timing his tactics to perfection to pull the pin with five to go and hold off expected Championship rival and eventual second place finisher Enea Bastianini (Leopard Racing).

Marco Bezzecchi (Redox PruestelGP), fresh off the top step of the rostrum at Termas di Rio Hondo), came out top in a classic last lap battle to complete the podium in third.

It was Martin who got the holeshot, heading into the lead from pole as teammate Fabio Di Giannantonio shot through from Row 2 to slot into second. There began an early freight train, with Martin, ‘Diggia’, Aron Canet (Estrella Galicia 0,0) and Dennis Foggia (Sky Racing Team VR46) the men leading the fight at the front.

Di Giannantonio, however, soon decided it was his turn to take over as he overtook his teammate, before Foggia flew through in a stunning double overtake past both Del Conca Gresini Moto3 riders. Then it was Marco Bezzecchi’s (Redox PruestelGP) turn to attack as he moved his way through the group and dueled Foggia to take over in the lead, with everything feisty and fiery in the early stages.

Meanwhile, Livio Loi (Reale Avintia Academy) had been making some serious progress through the pack, up from P26 on the grid to be heading the second group by half distance – along with Andrea Migno (Angel Nieto Team Moto3). As they caught the group ahead, it became an eight-rider battle for the lead and the race was once again impossible to call.

As the laps ticked down, however, Martin had his mind on tactics. With five to go the Spaniard struck and pulled the pin as he unleashed some serious pace – able to start making a gap as Bastianini got through to lead the chase. The ‘Beast’ pushed and pushed but Martin wasn’t for being caught, eventually crossing the line an impressive second and a half clear of Bastianini to take win number two of the year.

Bastianini was also in clear air as he’d escaped the pack, but it was a big battle behind to complete the podium. Bezzecchi was holding onto it until the final sector, where Di Giannantonio dived up the inside in a last corner last ditch lunge – and ran wide. But Bezzecchi didn’t, keeping it together and able to cross the line ahead for a back-to-back podium for the first time. Migno also able to take advantage of the Del Conca Gresini rider heading wide, taking fourth and just pipping ‘Diggia’ at the line.

Just behind that scrap, Philipp Oettl (Südmetall Schedl GP Racing) took sixth after a frontrunning race, losing out on the final lap as he got caught up in a moment for Di Giannantonio, with Jakub Kornfeil (Redox PruestelGP) taking P7 on an impressive charge. Canet, who struggled in the latter stages, crossed the line in eighth and relinquished the points lead – with Tatsuki Suzuki (SIC58 Squadra Corse) and Loi, from 26th on the grid, incredibly completing the top ten.