Reigning Champion Marc Marquez (Repsol Honda Team) took a stunning second win of the season – and his second win at Jerez – in the Gran Premio Red Bull de España, fighting to the front and just able to pull away into clear air, away from some huge drama that then hit the race behind. 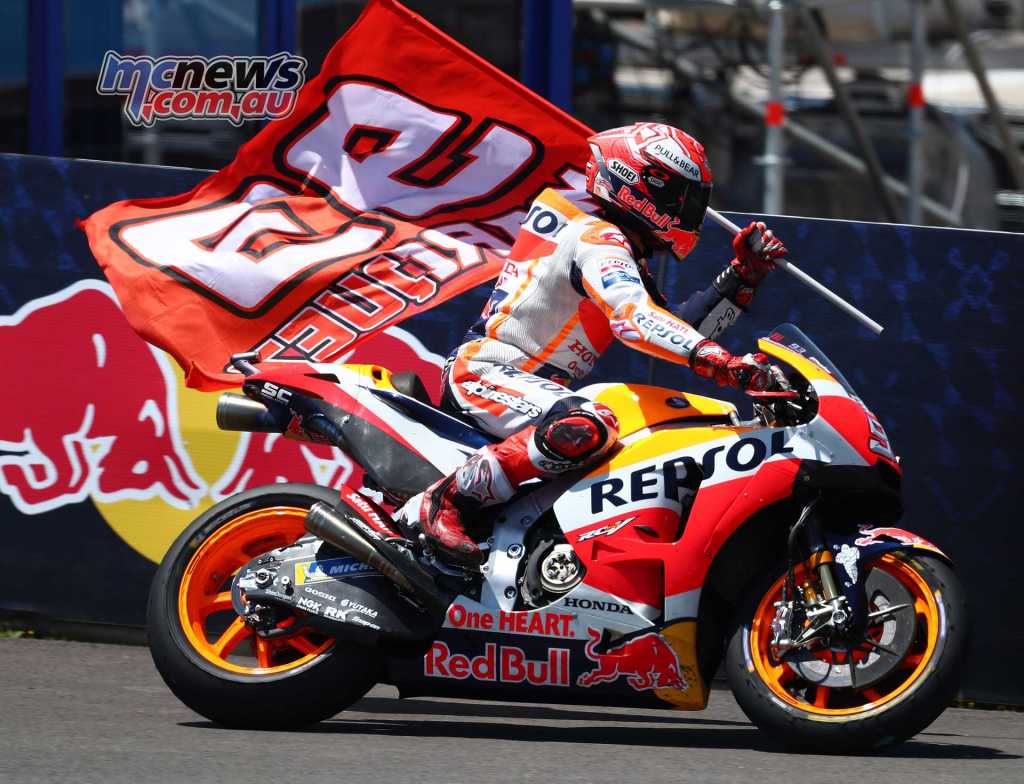 In a pivotal day in the Championship, an unbelievable racing incident saw Jorge Lorenzo (Ducati Team), teammate Andrea Dovizioso and Dani Pedrosa (Repsol Honda Team) all crash out in one go at Turn 6.

Lorenzo got the holeshot after an unbelievable launch from the second row, taking the lead ahead of Pedrosa in second and Zarco in third as polesitter Cal Crutchlow (LCR Honda Castrol) lost out off the line. Marquez remained where he’d qualified in fifth, with Alex Rins (Team Suzuki Ecstar) in sixth. 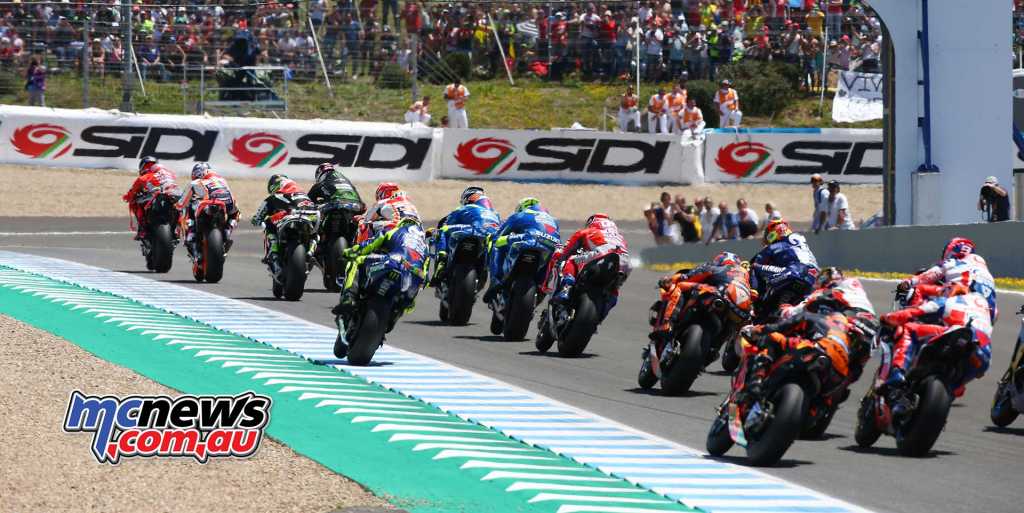 Lorenzo pushed early from the front to set the pace, with Pedrosa holding station in second as Marquez, Crutchlow and Zarco squabbled for third. A moment for Zarco soon after then saw the Frenchman out wide and dropping back. 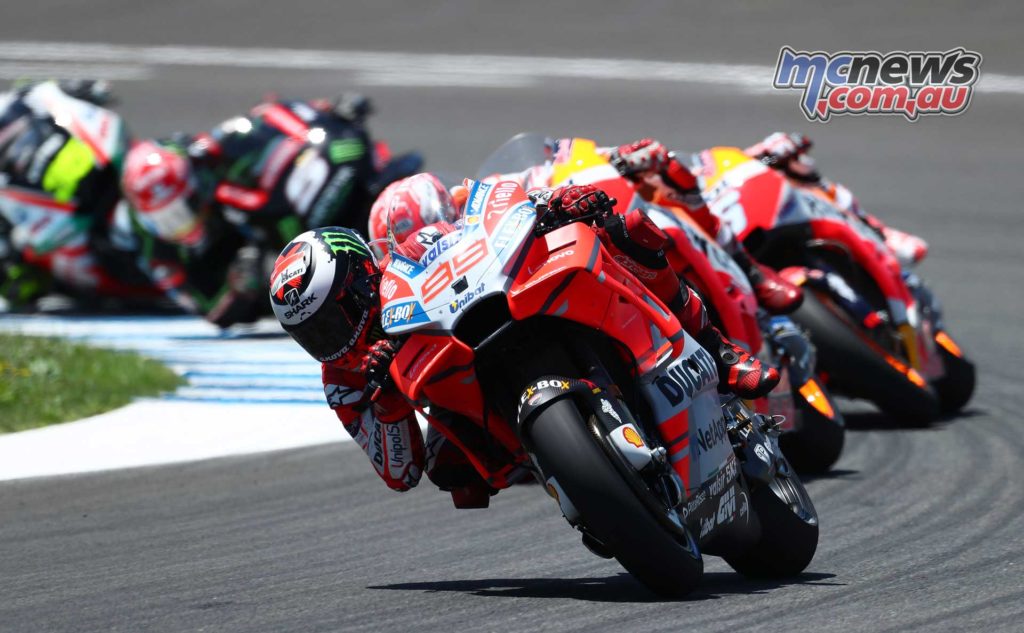 Then Crutchlow crashed out, before another name went missing from the front group as Rins followed suit not so long after.

Meanwhile Andrea Dovizioso (Ducati Team) had made his way through to the front group – making for a Repsol Honda vs Ducati Team duel of duos fighting it out.

With 16 laps to go, however, Marquez made his move – slicing past Lorenzo to take over in the lead as ‘DesmoDovi’ and Pedrosa looked for a way past the number 99. 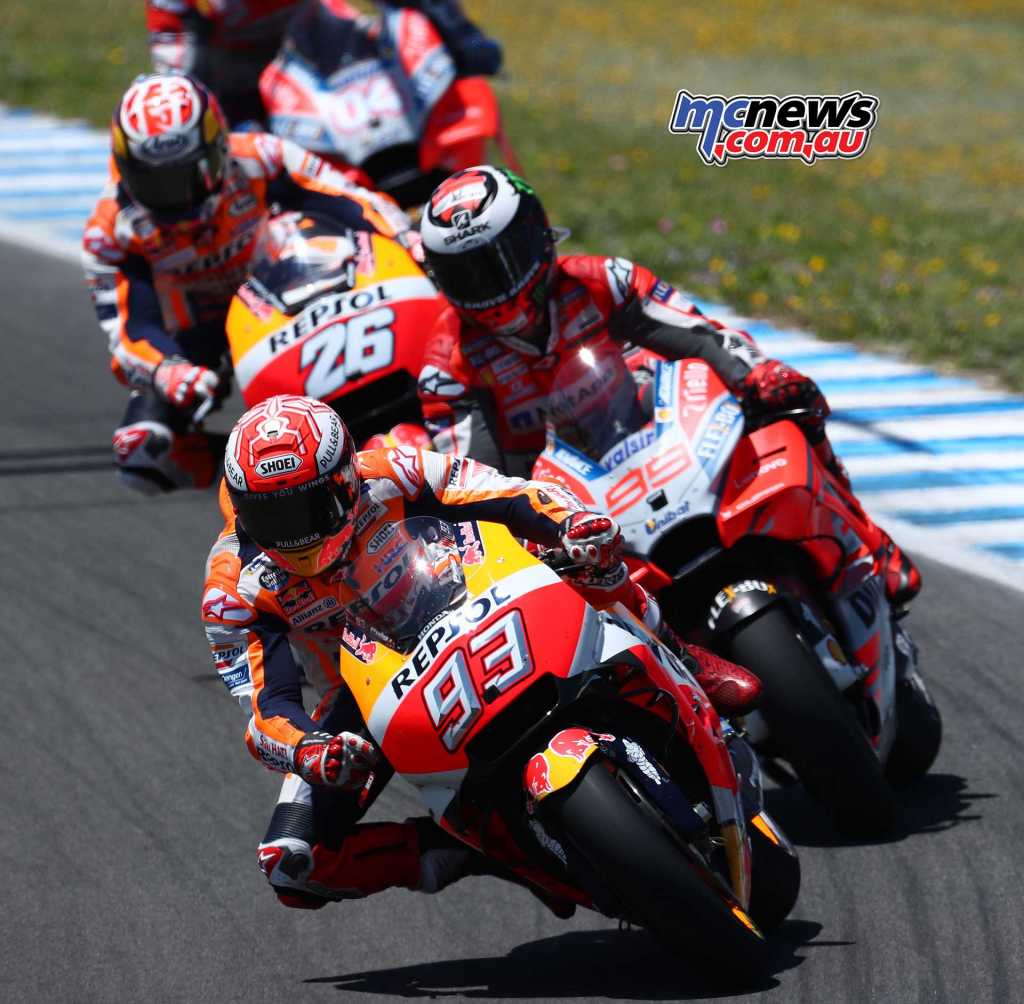 After some chopping and changing as Marquez pulled away, it was then time for the overwhelming headline of the race: the three-rider crash that saw Lorenzo, Dovizioso and Pedrosa all collide and tumble into the gravel.

Dovizioso had attacked Lorenzo into Turn 6 but headed too deep, with the number 99 then cutting back towards the apex – but Pedrosa was already there. The two collided with each other and then Dovizioso; the gravel trap waiting for the three men and the shockwaves of the moment were ricocheting around the circuit as the dust settled. Costly in the Championship, but the three all walked away relatively unharmed from the incident. 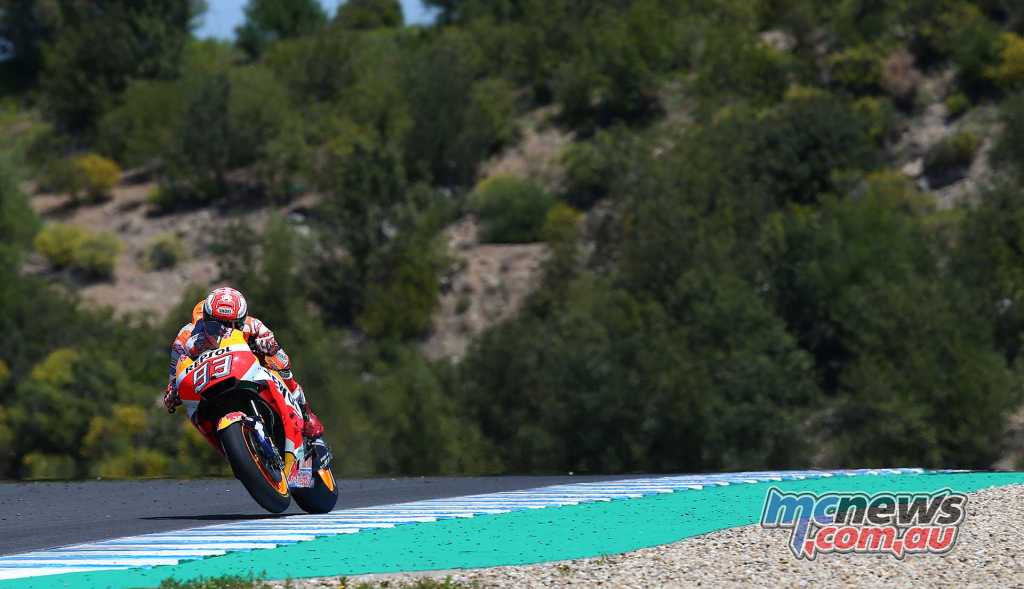 That left Zarco with the unbelievable sight of a Repsol Honda and both Ducatis in the gravel as he came past, Zarco inheriting second and then facing seven laps to keep calm and take yet another impressive podium. 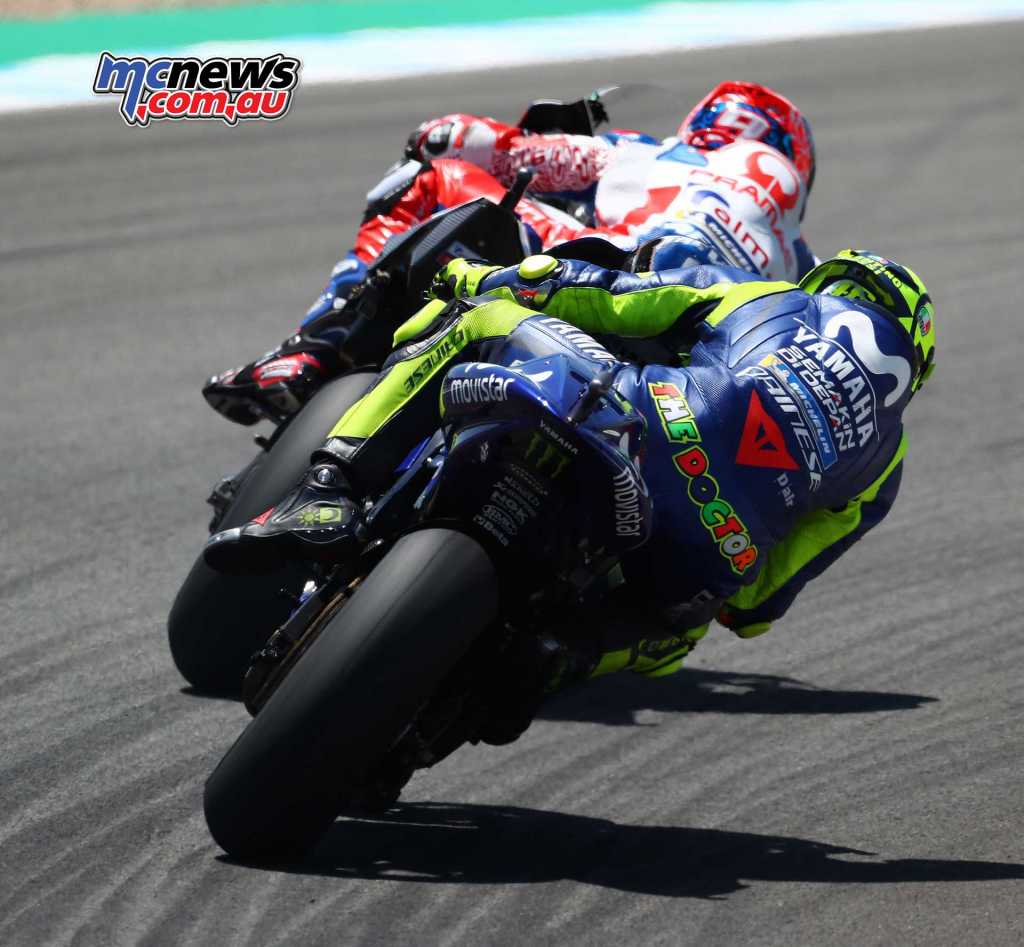 The battle to complete that after the drama up ahead was hotting up, meanwhile, as Danilo Petrucci (Alma Pramac Racing) and Valentino Rossi (Movistar Yamaha MotoGP) were closing in on the Suzuki of Andrea Iannone in third. 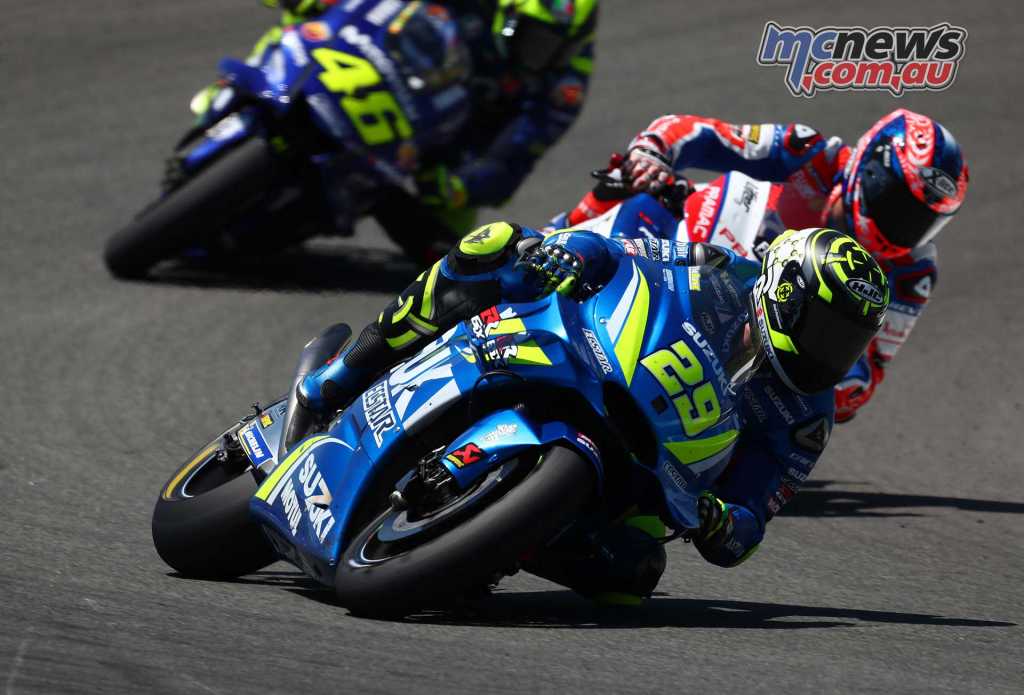 As the last lap dawned, Iannone was just able to make a gap and stay clear of the chasing Italians, despite Rossi having pulled back an awesome amount of distance on the penultimate lap to get himself in contention. So the ‘Maniac’ crossed the line in third for the third Suzuki podium in a row, Petrucci took fourth and Rossi a top five finish in the race in which he completed a lap of the world – now having raced the equivalent distance of the circumference of the Earth upon finishing Lap 15.

Jack Miller (Alma Pramac Racing) just dropped off that battle late in the race to cross the line in sixth. 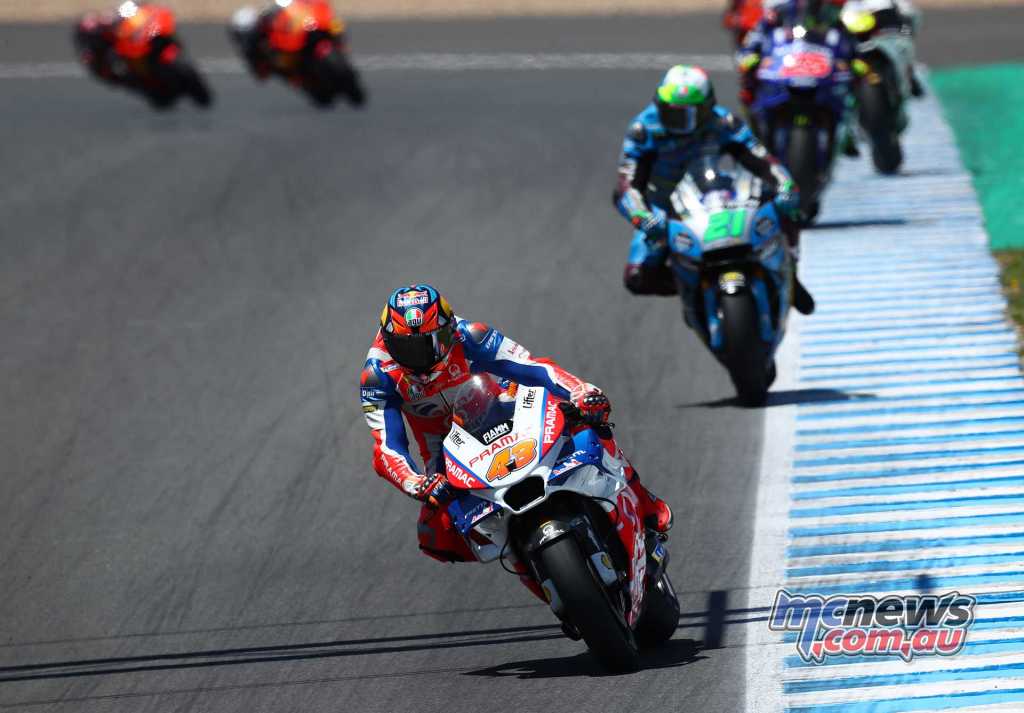 Maverick Viñales (Movistar Yamaha MotoGP) made some progress from outside the top ten in the initial stages to take P7. 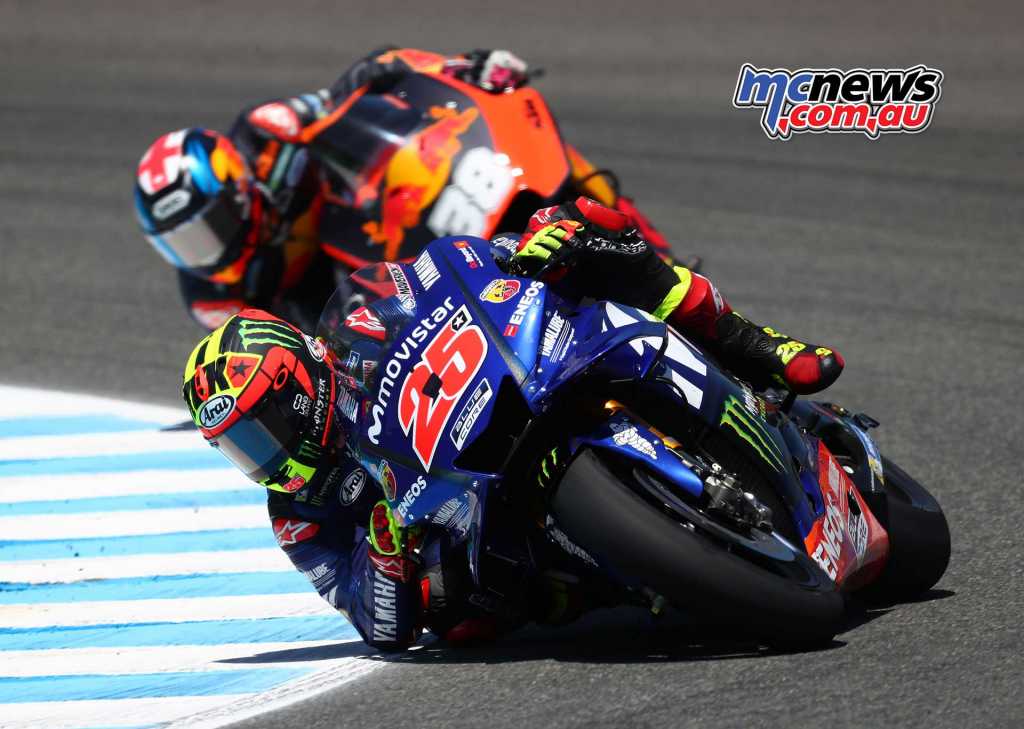 Eighth was the best result of 2018 so far for Alvaro Bautista (Angel Nieto Team) after he fought with Viñales for much of the race, with top rookie Franco Morbidelli (EG 0,0 Marc VDS) taking ninth and his first top ten result in the premier class. 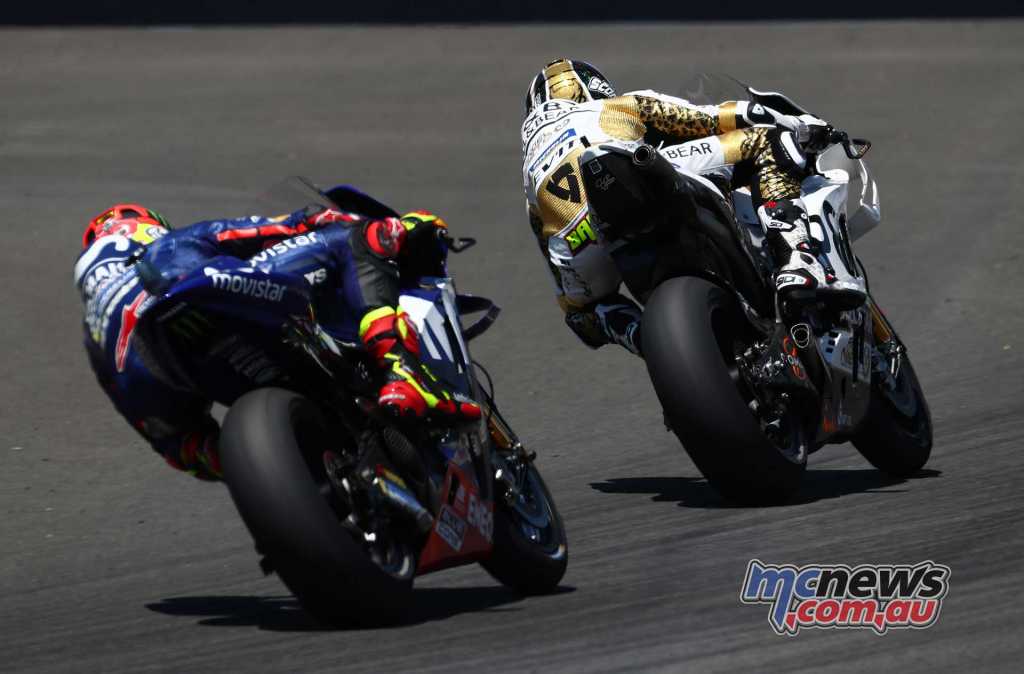 Mika Kallio (Red Bull KTM Factory Racing), wildcarding on a prototype of the 2019 RC16, completed the top ten in another stunning ride, and teammate Pol Espargaro took P11 as he won a battle against Takaaki Nakagami (LCR Honda Idemitsu) by mere hundredths at the line. Bradley Smith (Red Bull KTM Factory Racing) was incredibly close, too, taking P13 to make it three Austrian machines in the points. 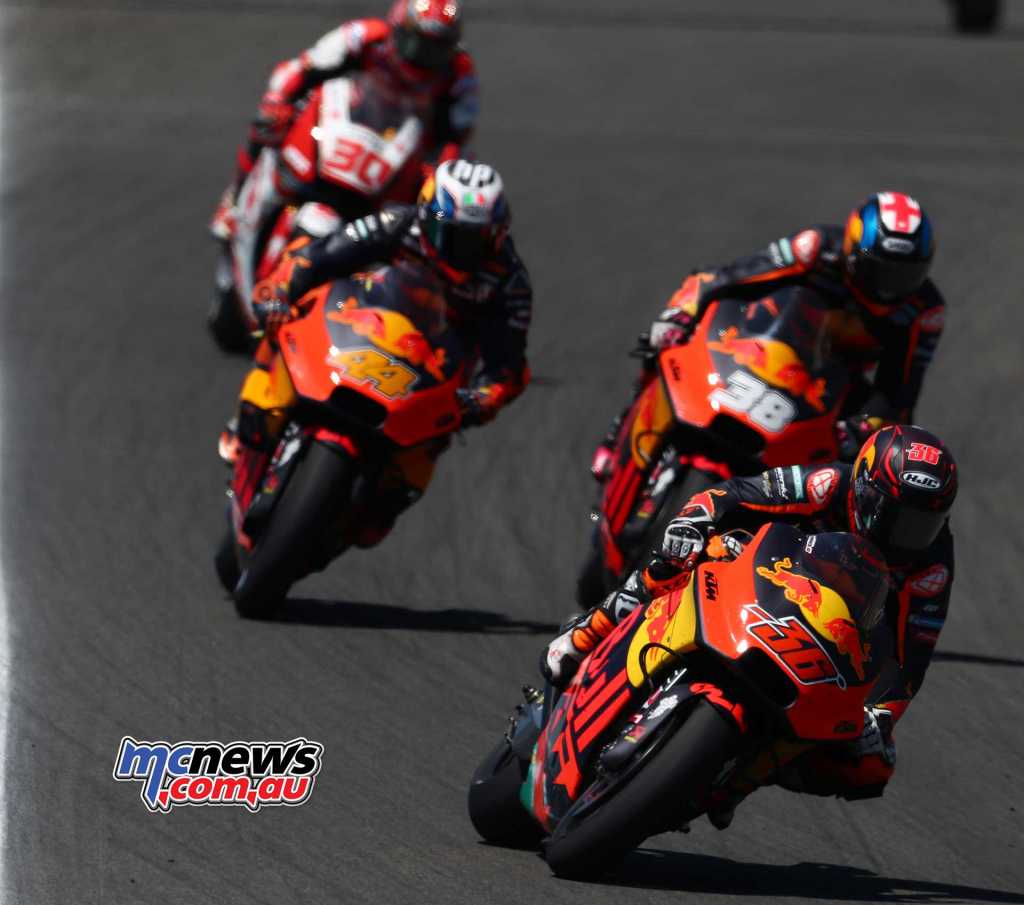 The dust has settled at Jerez, but not in the title fight. There’s a new man at the top after the Spanish GP, and it’s race winner Marc Marquez – so the chasing pack have some ground to make up at Le Mans. 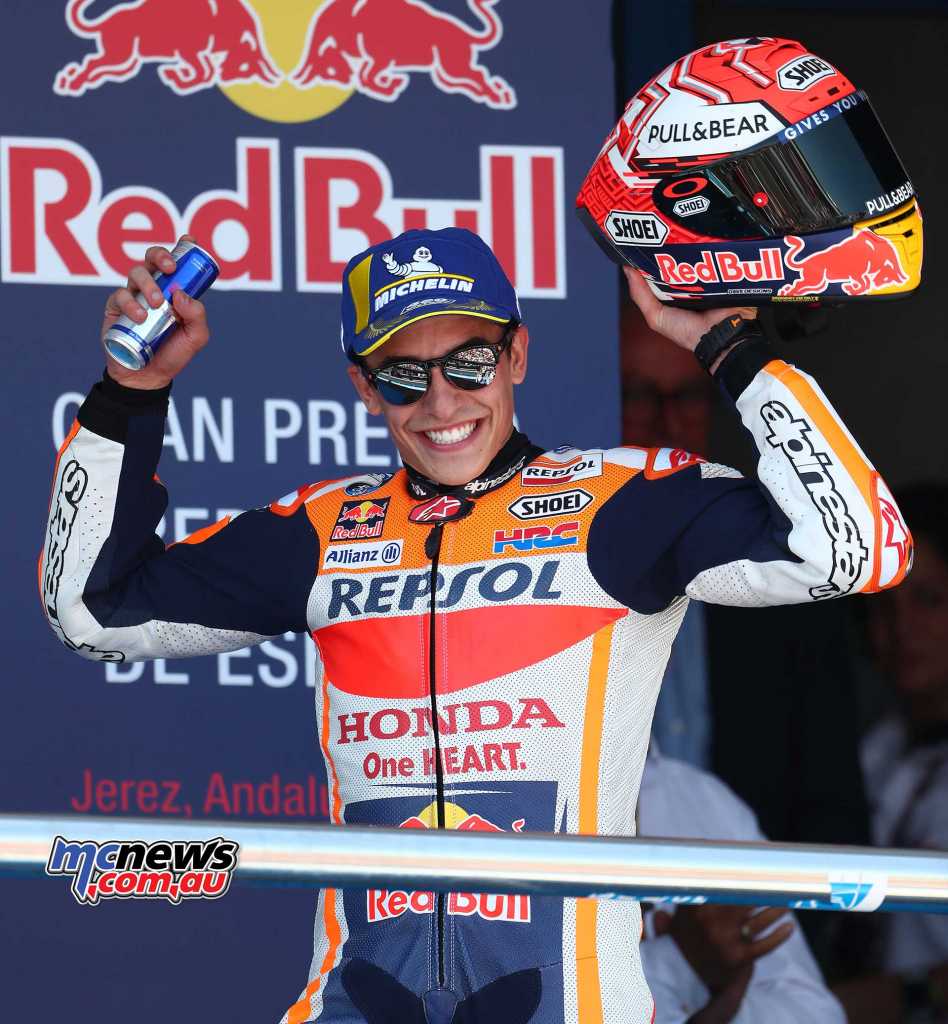 Leading that charge to chase down Marquez is Zarco who will be on home turf nxt round, the Tech3 Yamaha man who recently signed for KTM for season 2019, is second in the 2018 standings as we head to France on the weekend of May 20. 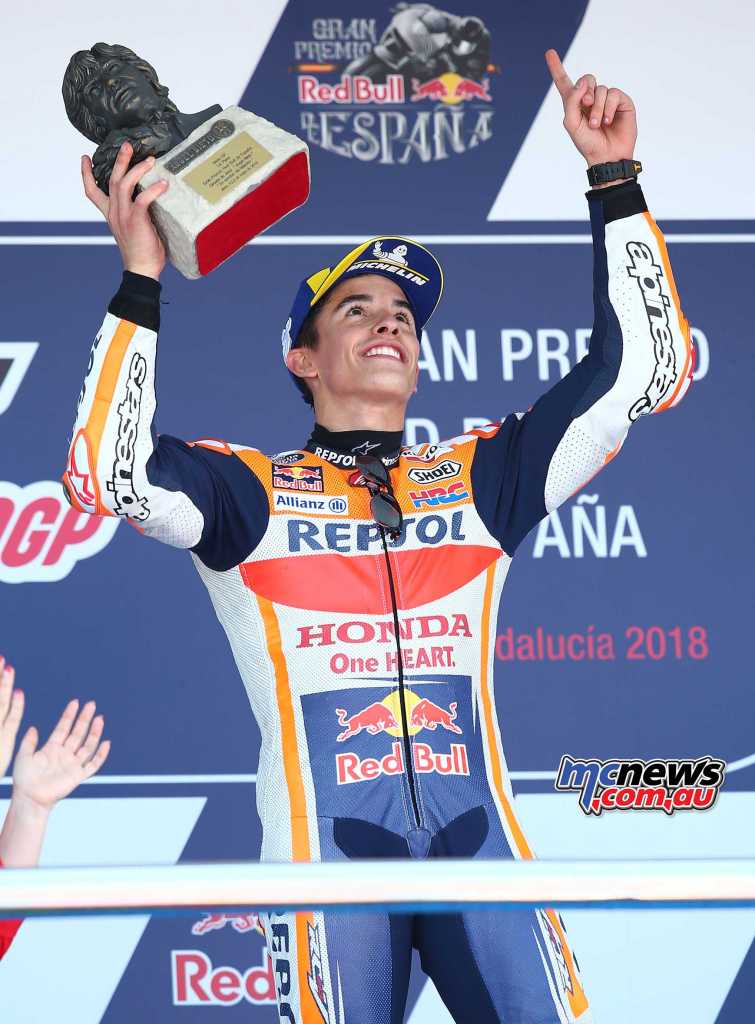 Baldassarri in a class of his own in Jerez

Lorenzo Baldassarri (Pons HP40) rode imperiously to take only his second ever Moto2 victory at the Gran Premio Red Bull de España, lifting him up to second in the World Championship. Miguel Oliveira (Red Bull KTM Ajo) came from P14 on the grid to take a superb second, as Francesco Bagnaia (SKY Racing Team VR46) took the checkered flag in third, keeping him top of the Championship standings – as last year’s race winner Alex Marquez (EG 0,0 Marc VDS) crashed out at Turn 2. 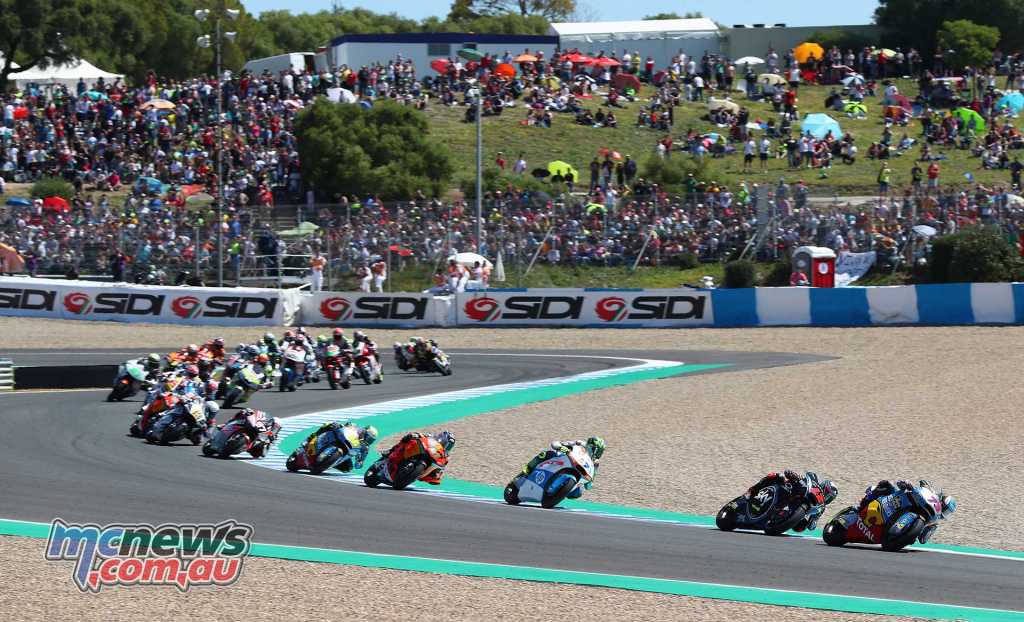 Launching from pole, Baldassarri didn’t get the start he wanted, losing out to Marquez, Brad Binder (Red Bull KTM Ajo) and Bagnaia as the pack headed into Turn 2. 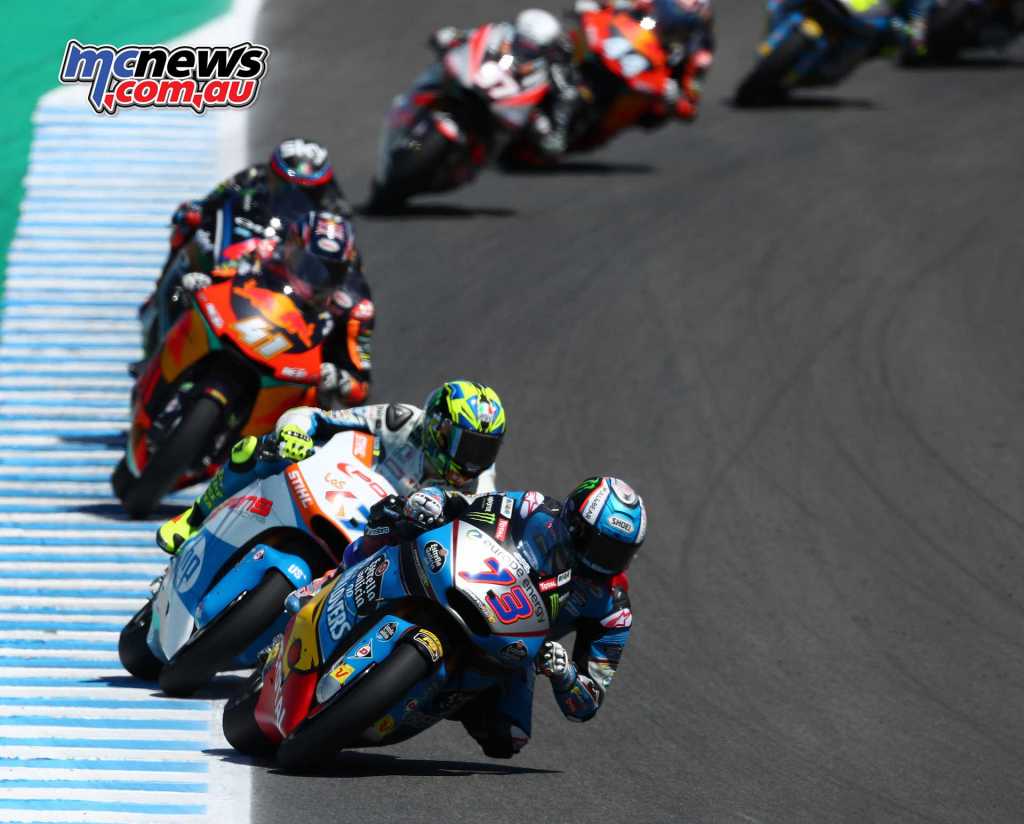 There was drama down at Turn 6 on the opening lap, as Luca Marini (SKY Racing Team VR46) broke too late into the hairpin, collecting Jorge Navarro’s (Federal Oil Gresini Moto2) rear tyre, taking them both down in the process – riders ok. Meanwhile, Oliveira was making up the places after a cracking start, the Portuguese rider up to eighth on the opening lap.

Baldassarri hit the front for the first time on lap three, with Binder, Bagnaia, Marquez and Oliveira in close pursuit. The number 7 then pushed on, creating a small gap between him and second place Binder after setting a new race lap record, with the former Moto3 World Champion starting to struggle on his KTM.

By lap seven, Oliveira and Marquez were the two keeping the Pons HP40 rider in check, with the three of them slightly gapping Bagnaia, Xavi Vierge (Dynavolt Intact GP), Binder, Mattia Pasini (Italtrans Racing Team) and Romano Fenati (Marinelli Snipers Team) behind. The Italian rookie then crashed at Turn 10 while battling with Pasini, but walked away unhurt. 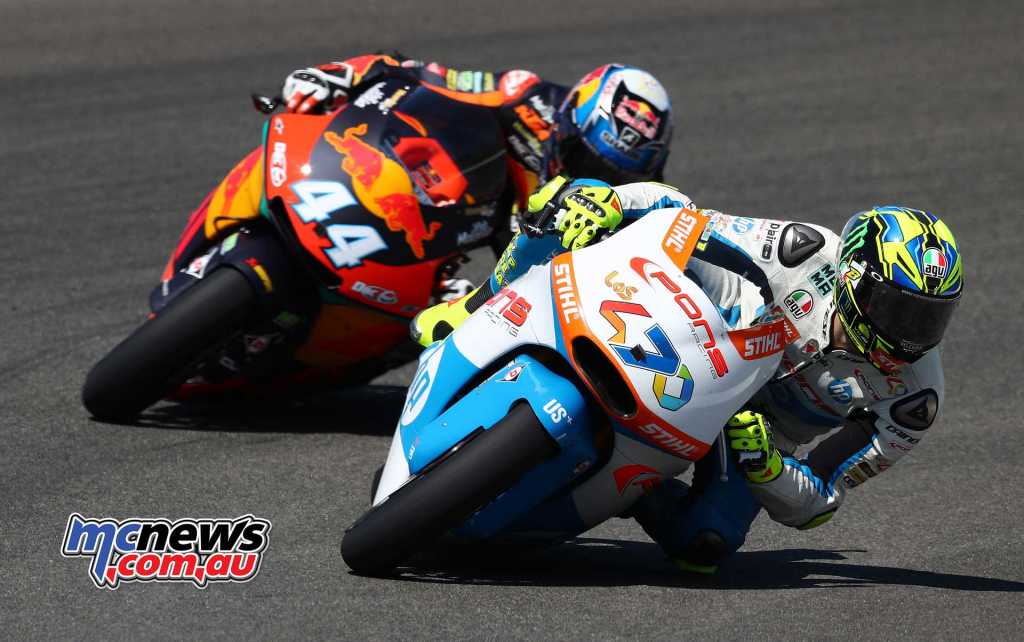 11 laps in and the front three were still ahead, however disaster then struck for Marquez. Pushing to stay in touch, the Spaniard lost the front at Turn 2, a carbon copy of Marc Marquez’s crash at the same corner.

It was all about Baldassarri at the front though, gradually edging clear of Oliveira to create a two second gap. The battle for the final podium looked to be hotting up as Vierge and Pasini closed the gap to Bagnaia. The Argentina GP race winner then dropped off the pace, leaving Vierge to challenge the Championship leader.

The brilliant Baldassarri wheelied across the line, with Oliveira and Bagnaia – who held off Vierge – rounding off the podium. Pasini came home in a solid fifth, as Binder had to settle for sixth. Marcel Schrӧtter (Dynavolt Intact GP), with shoulder ligament damage, was a phenomenal seventh, with Sam Lowes (Swiss Innovative Investors), his teammate Iker Lecuona, Fabio Quartararo (Beta Tools – Speed Up Racing), reigning Moto3 World Champion Joan Mir (EG 0,0 Marc VDS) – who has been suffering from a stomach bug all weekend – and Simone Corsi (Tasca Racing Scuderia Moto2) rounding out the top 12.

Oettl wins a stunner after a Championship shake up in Jerez

Philipp Oettl (Südmetall Schedl GP Racing) has taken his first ever Grand Prix win on his 91st start, emerging from a dramatic latter part of the race to face Marco Bezzecchi (Redox PruestelGP) in a last lap duel and drag to the line, coming out on top by just half a tenth.

Completing the podium was Marcos Ramirez (Bester Capital Dubai), back on the rostrum at his home race after some late drama saw rookie Alonso Lopez (Estrella Galicia 0,0) lose one position from where he’d crossed the line – third. Lopez took P4 after an early run off and stunning ride through the pack.

That wasn’t the biggest drama late in the race, however – with a multi-rider collision with four laps to go giving the standings a serious shake up. Aron Canet (Estrella Galicia 0,0) overcooked Turn 6 and made contact with Championship rival Jorge Martin (Del Conca Gresini Moto3), with Enea Bastianini (Leopard Racing) and Tony Arbolino (Marinelli Snipers Team) also caught in the domino effect and all four out the race. Canet received a penalty and will be starting from the back in the next race.

In the standings, however, that leaves Bezzecchi at the top of the pile – with the KTM rider now eight clear of previous points leader Martin. 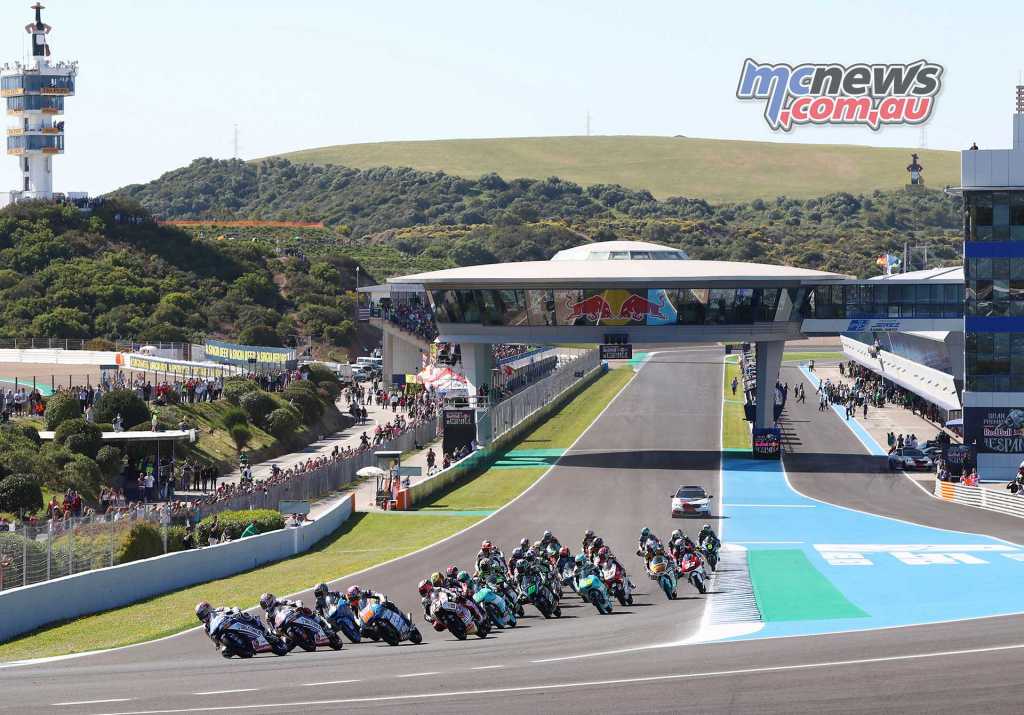 It was Martin who took the holeshot off the line before the tale took a turn, with teammate Fabio Di Giannantonio slotting into second as a crash at Turn 2 saw John McPhee (CIP – Green Power) collide with Dennis Foggia (Sky Racing Team VR46) and Lorenzo Dalla Porta (Leopard Racing). But 18 riders managed to remain in a huge front freight train – with the classic Moto3 chopping and changing then soon lighting it up.

That was when Lopez made a big error when fighting for second, the rookie having already impressed in the initial laps but then running off track briefly as he attempted to attack eventual winner Oettl. The EG 0,0 rider was then dropped back out the points and faced a battle back through – pulling that off in style to cross the line third and then lose one position to be classified fourth.

That was behind the battle at the front as Oettl arrived on the final lap ahead of Bezzecchi. The two were in clear air after the Canet-Martin-Bastianini-Arbolino incident behind them, and the German held firm with a perfect defensive ride to emerge out the final corner ahead and keep it on the slipstream. 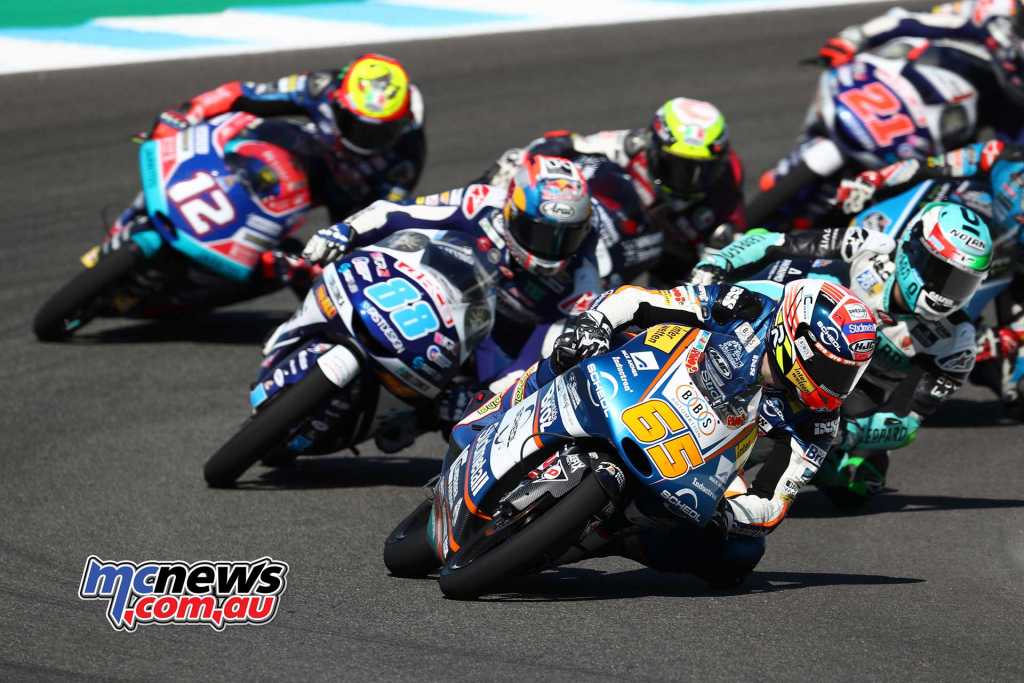 Second rookie home Jaume Masia was another who, like teammate Ramirez ahead of him, put in an impressive ride through the pack as the Bester Capital Dubai rider made it a double top five for the team, ahead of Tatsuki Suzuki (SIC58 Sqaudra Corse) in sixth. Di Giannantonio, after dropping a little off the leaders following an earlier mistake, crossed the line in P7 ahead of Jakub Kornfeil (Redox PruestelGP).

2014 Asia Talent Cup Champion Kaito Toba (Honda Team Asia) had a stunning race to lead much of the fight to complete the podium, ending up P9 over the line after drama at the final corner. Gabriel Rodrigo (RBA BOE Skull Rider), despite a big crash on Saturday, completed the top ten for more solid points.

Now it’s time to head for historic Le Mans, with Martin, Canet and Bastianini all having taken no points from Jerez – and Bezzecchi in the driving seat in the Championship.