Race one was an exciting battle that ended up going down to the wire between Mike Jones and Troy Herfoss.

It was the Ducati man that had the power to take the victory but the Penrite Honda looked incredibly strong around the corners, even when the tyres were shot, Herfoss looked to have supreme confidence as the Fireblade SP slithered around underneath him.

Daniel Falzon was very strong early on before losing the front at turn nine and going out of contention. Maxwell was also strong in the first half of the race but ultimately lost pace as the race progressed and his tyres were cooked.

Bryan Staring and Cru Halliday never really figured in the fight but were never far off, so close, but yet so far. The gap at the flag was five-seconds but it was only in the last two laps that gap had been that large, and if they managed to improve their set-up between races were likely to be a larger factor in this final battle that would decide the war.

Only half-a-point between Herfoss as they lined up on the line. The forecast thunderstorms were still yet to appear and it looked like we would have a fully dry race to decide the championship.

Wayne Maxwell led the field through turn one from Herfoss while Jones had a brilliant start from the third row to be up to third place by turn two and tussling with Herfoss on exit, the Penrite Honda man making the Ducati pilot stand the bike up a little on exit to avoid contact.  Falzon fourth, Halliday fifth, Waters sixth, Staring seventh.

Mike Jones overtook Herfoss down the main straight and held on to that position through turn one and then stood Maxwell up at turn two in an aggressive pass.

Herfoss then got Jones on the change of direction between turns four and five, held on around the back of the circuit, Jones looked up the inside at turn nine but no need to take any risk, he can just wait for the main straight and pull the trigger on that big 1299 Ducati and blow past him on the straight, which is exactly what happened.

Jones held on to that lead for the entire next lap but was closely shadowed by Herfoss throughout. Maxwell was right behind them in third, Halliday and Falzon were still in close touch at this stage also.

By half-race distance Maxwell had started to lose ground on that leading duo and was coming under attack from Cru Halliday.

Herfoss continued to shadow Jones for the next couple of laps before going up the inside at turn one with five laps to go.

Jones came back at him a lap later but ran wide and Herfoss took the lead right back. Again on the next lap the move happened at turn two, this time Herfoss in a little deep and Jones through to the lead with just under three laps to run.

Wayne Maxwell had drifted back to fifth but Staring then went down, promoting Maxwell back up fourth. Cru Halliday was in a somewhat lonely third place.

Jones and Herfoss side by side at turn two with just under two laps to run, Herfoss through at turn three and into the lead, Jones looks up the inside at turn four but can’t do it.

Last lap board and Herfoss led past the stripe but Jones powered up the inside to take the lead into turn one, the Ducati man holds sway at turn two, maintains the lead at turn three and four. Herfoss takes him on change of direction and leads down to turn seven, Jones up the inside at turn eight, Herfoss up the inside at nine but can’t stop it, he runs wide, Jones left with an easy run to the line and with it the 2019 Motul Pirelli Australian Superbike Championship.

Troy Herfoss a valiant second, Wayne Maxwell third in the series and Cru Halliday fourth in the championship which makes for four different manufacturers filling the top four places in the title.

What a finale, what a championship. Roll on season 2020!

Tom Edwards again scored the holeshot from Tom Toparis and Jack Passfield while Callum Spriggs was hot to trot from the off in this one coming through from further back on the grid and up to fourth place.

Oli Bayliss fought his way through to the podium in the opening race but there would be no repeat in this bout as the young Queenslander went down at turn nine with Aidan Hayes.

Tom Edwards maintained the lead over the opening few laps but Toparis swept past him at turn nine with just over eight laps to run and took the lead. Edwards got him back early on the next lap to move back to the front, Jack Passfield was still right with that duo.

Callum Spriggs was a couple of seconds down in fourth but went down with seven laps to go and out of the race which promoted Broc Pearson up to that fourth place.

Toparis back into the lead with six laps to go but again Edwards came right back at him into turn two once again. They swapped places again shortly after and this time around managed to maintain the lead for more than a few corners. Toparis then started to eke away from Edwards, the newcomer pulled some of that gap back again with two laps to go but Toparis responded to the challenge and simply pulled away from his pursuer yet again and took a clear victory at the flag.

“It’s just topped off a fairy-tale year for us – in the end, we only lost six points for the whole season. Tommy (Edwards) was so good to race against – it was awesome to have someone of his calibre coming and racing here. He hasn’t had a lot of time on the 600cc bike, so he’s done really well.”

A hugely impressive Supersport debut for Tom Edwards this weekend on a bike that he has not had much set-up time on.  He made Toparis work for the victories in this season finale.

“It’s super-good to be back – it’s great racing back here, just as it was when I left at the end of 2017. It’s really good to see how competitive Supersport is – I’ve tried to keep up with Tom all weekend, overtook him a couple of times but I didn’t have anything left at the end of the last race.”

Jack Passfield also deserving of some kudos for his performances here at SMP this weekend.

Toparis though the dominant force in this category all season and a thoroughly deserving champion.

The afternoon schedule kicked off with the final exciting tussle for Supersport 300 glory at SMP and it was Senna Agius with the early advantage over Seth Crump, Hunter Ford, Zac Levy and series leader Max Stauffer.

It was as usual an intense battle throughout the entire eight-lap distance and at half-race distance the primary duo tussling over the lead were Senna Agius and Hunter Ford. With two laps to run still only half-a-second covered the top five.

Early on the final lap Agius swooped back through to the lead, Hunter Ford tried up the inside at turn three, again at turn nine, but Agius held on… Stauffer was in sixth and if it finished like that Agius would pip him to the title by a single point!

Down the chute they go and Agius holds on, he takes the win sand with it the 2019 Australian Supersport 300 Championship by a single point over Max Stauffer.

“On the last lap, I was seventh heading into the first corner, and I thought ‘I have to make something special’ – I put my head down, and by Turn 9 I was in first. It was a bit risky leading out of the last corner, because I got slipstreamed to the line in Race 2, but I just took a breath, hoped I could get there and I got it done. I love ASBK, it’s fun racing and associating with all the competitors.”

A triumphant victory for Agius and a crushing blow for Stauffer.

Sunday’s two OJC races were both won by Marianos Nikolis, who also claimed his first overall round win ahead of Tom Drane and Archie McDonald. Thompson ended up at the top of the standings ahead of Grenfell and Drane.

The recently-selected Asia Talent Cup Australian representative only needed to finish ahead of Angus Grenfell to clinch the title, and he took a sensible approachto claim the title.

“It’s been a great year, and I’d like to thank all the people who made the Oceania Junior Cup happen. I was a bit nervous before that race, but once it started I knew I just needed to get as far forward as I could.”

Zac Levy won both Sunday’s YMF R3 Cup races, but it was Hunter Ford who clinched the championship with a couple of consistent finishes.

Levy took the win in Race 3 by just 0.002s from Lytras, with Max Stauffer just 0.1s away from the win. Ford finished in eighth position after a conservative performance, but it was enough for the Newcastle rider to win the title.

“I knew I only had to finish in the top 17 to win the title – winning the race would have been nice, but it’s been a good season.”

Aaron Morris chalked up two more dominant race victories in the Superbike Masters, but the highlight was the battle for second between John Allen and Stephen Kairl, culimating in a battle in Race 3.

Some rapid starts from Kairl worked to his advantage in both races, especially in Sunday’s final race where he moved into the outright lead for a couple of laps, and he ultimately sealed the runner-up spot.

“I got a bit gifted in that last race, but I’m so lucky to be able to ride such a beautiful bike at such a big event.”

ASBK / Aussie Road Racing Trevor Hedge - January 5, 2020
Paul Free returns to Honda for ASBK 2020 Only a couple of years after shutting up his Team Honda Racing operation in Campbellfied and handing...
Read more

ASBK / Aussie Road Racing Trevor Hedge - January 3, 2020
Successful Michelin-Honda partnership to be rekindled in 2020 The tyre war in Australian Superbike has a long history where the fortunes of the various rubber...
Read more

Matt Walters back in the ASBK ring with Kawasaki in 2020

ASBK / Aussie Road Racing Motorcycle News - December 17, 2019
BCperformance ramp up for ASBK 2020 Kawasaki BCperformance Racing have announced they they will continue to campaign in the Australian Superbike championship (ASBK) in 2020...
Read more

ASBK / Aussie Road Racing Trevor Hedge - December 13, 2019
Maxwell on McMartin prepared Ducati for ASBK 2020 After Steve Martin left for Europe at the turn of the century Ducati's presence in the ranks...
Read more 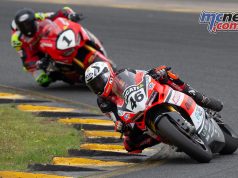