While Wayne Maxwell showed some stellar speed at the Phillip Island season opener, including surprising himself with victory in race one, when I spoke to him during the weekend he said the Suzuki still didn’t feel like ‘his’ bike, and that he was still far from fully comfortable.

This week, alongside many of the ASBK regulars present for an official two-day test at Wakefield Park, Maxwell got to turn plenty of laps on the Team Suzuki machine to further familiarise himself with the GSX-R1000R.

Today Maxwell got familiar enough to top the two-day test with a best of 57.659. That was today’s official benchmark by a slender margin over Troy Herfoss’ 57.728.

The defending champion getting back down to the business of preparing for his ASBK Championship defence now the troubled WSBK wildcard appearance at Phillip Island is firmly behind him.

The test gave Maxwell enough seat time to experiment with different settings on the machine, and to learn more about what affect those changes had on the bike. This will arm him with more knowledge to give better feedback to the team throughout each session from hereon in, as the season progresses.

Unfortunately though another Suzuki rider was made very uncomfortable today. Young Max Croker crashed heavily and was air-lifted to hospital. There it was confirmed that he has broken the same collarbone that he broke last year, from which he only had the plate removed from about four months ago. The more worrysome injury is to his hand, where early indications suggest that multiple breaks have been sustained that will leave him on the sidelines for some time.

He is currently waiting to see a hand specialist before any treatment plan and prognosis can be made. Team owner Mat Mladin rang in to tell us that they will support Max the best they can on his road to recovery, and when he is ready to go again, his Mladin Racing Yoshimura Suzuki GSX-R1000 and all the team support will be waiting for him.

Aiden Wagner put in a 58.067 to end the second day third quickest on the time-sheets ahead of Josh Waters.

Alex Phillis stopped the clocks at 58.896 ahead of Lachlan Epis who with a 59.964 was the final rider to lap under the minute mark.

One rider missing the test, while recovering from surgery after being injured at round one, was none other than Troy Bayliss.  With TB laid up after surgery and wanting to rest up in order to have a fighting chance of some good results when ASBK returns to Wakefield Park to race in a few weeks time, DesmoSport Ducati recruited Mike Jones for testing duties aboard the 1299 Panigale R Final Edition.

The recently turned 25-year-old turned up on a K&R Hydraulics backed ZX-10RR for the season opener at Phillip Island where he scored a best of second place, and a fourth overall for the round.  That’s a pretty good scorecard by anyone’s standards.

Jones of course is no stranger to Ducati machinery and took little time get back in the groove. The team elected to not run a transponder, thus no times were registered on the circuit timing system, but talk around the paddock suggested that Jones might have actually undercut Maxwell by two-tenths-of-a-second to end the day fastest, unofficially at least…

DesmoSport Ducati were not originally planning to attend this test and actually have the track booked for next Wednesday. But after Troy’s injury they decided to attend anyway and put Mike on the bike. They will test again next week and have now opened up an opportunity for other interested parties to join them on track at that test.

Mike Jones will ride the bike again next week and unless Troy’s hand gets a hurry-on in its strength and dexterity, Jones might actually ride the 1299 Panigale R Final Edition at the race here at Wakefield Park later this month.

What is YRT’s form like heading to Wakefield Park…?

The Yamaha Racing Team also tested at Wakefield Park recently but their pace is an unknown. Likewise, how will the Kawasaki and the Dunlop challenge via Bryan Staring fare around the tricky Wakefield Park layout?

We will have to wait until the weekend of March 24 when the second round plays out around the 2.2-kilometre Wakefield Park circuit, situated on the outskirts of Goulburn between Sydney and Canberra. See you there! 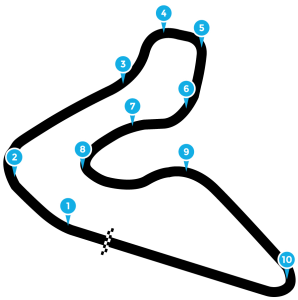