Western Australian Photographer and Journalist John Innes gives us the race report from the 2019 Australian Historic Road Racing Championships, which took place at the newly extended Collie Motorplex in WA.

Promoted by the Historic Competition Motorcycle Racing Club of WA and supported by Motorcycling Western Australia and the Shire of Collie, the event saw riders from across the country travel to Western Australia for the Queen’s Birthday Long Weekend.

Unfortunately, the event finished early due to a large oil spill around the majority of the track. Officials spent several hours trying to clean up the track, but the final decision was made just before lunch on the final day to call the event.

Champions were crowned based on the races that had been run after all classes had completed at least two races on Sunday, with P3 Unlimited, P4 Junior, and P5 Sidecars getting a third race on Monday before racing was cancelled.

Kicking off the ‘Make Smoking History’ Australian 2019 Historic Road Racing Championship was the Period 4 Post Classic Junior Class and after the two qualifying sessions it was local rider Paul Smith (1972 Honda CB350) on Pole with a 1:21.887 closely followed by Adam Senior and Glen Ottley making it an all WA front row.

Race 1 was an all the way win for pole-sitter Paul Smith who was untroubled over the 5-lap journey. Second was Adam Senior (1971 Yamaha TR3) some 8.5 seconds in arrears with Tony Logan (1971 Honda CB 350) in third place.

In Race 2 the same three riders filled the top three places, with WA riders filling the first seven places. Race 3 on Monday morning and it was more of the same with Adam Senior winning the 5-lap race from Paul Smith with Glen Ottley in third place.

Paul Smith finished the event with 70 points, second was Adam Senior on 65 points and third was Tony Logan on 53 points.

Race 1 saw the WA pairing of Watkins/Cubbitt take the lead before they were chased down by Edward and Bronson Poucher who went on to take the win from Watkins/ Cubitt with Andrew Davies/Josh Mathers taking third place.

In race 2 Watkins/Cubitt got their revenge taking the win and never troubled over the five laps. Davies/Mathers took second after a race long battle with Edward and Bronson Poucher.

The Championship was run over the two rounds with Keo Watson undefeated on 50 points, second was Steven Crane on 40 points and Brian Richardson tied with Kathleen Mercer on 34 points, his higher finish in race two giving him the minor podium position.

In race one, Coote was the winner having survived a race long battle with Kyle Mountney, when the later high-sided exiting the chicane on the penultimate lap. Second was Owen Ward (1972 Honda CB-K2) with William Sayer (1972 Triumph Triton) third. Third place on the grid was vacant after Colin Boujos ran out of brakes on the ‘outlap’.

Race two and it was more of the same from Coote and Ward with Boujos returning to the fray and taking third place. Final points 1st Aaiden Coote with 50 points, 2nd Owen Ward with 40 points and 3rd William Sayer on 34 points.

Period 6 New Era Formula 1300 saw Aaiden Coote grab his second pole position on the (Southern Machining & Maintenance 1988 Honda VFR 750R) ahead of Josh Mathers and Paul Joshua. In the first race, the top three qualifiers finished in that order, with Coote setting a new record of 1:14.0060 seconds. That record lasted just five laps before Mathers set a new record of 1:13.8740 seconds on his way to beating Coote in race two with Glen Ottley taking third place.

Overall points saw Josh Mathers win the title by virtue of his higher placed finish in race 2, with Aaiden Coote and Mathers tied on 45 points Paul Joshua was third with 35 points.

In the first race, Wa’s Kevin Webb/Martyn Dunbar-Stuart led for a good part of the five-lap journey before being pushed back to second place by Linsay Donai/Lee Menzies with Doug Chivas/Scarlett Poucher in third place. Steve Scott/Brendan Darcy took first place in the P3 Sidecar division, second were Peter Large/Wayne Rowe and in third place were Christopher Large/ Peter Heywood.

In race two Donai/Menzies again took the win with Chivas/ Poucher grabbing second place with Webb/Dunbar-Stuart in third place. In the P3 Ian Milton/David Vincent grabbed the win ahead of William Hargrave/ Annette Tregger with Scott/Darcy in third place.

Period 6 Formula 750 saw Aaiden Coote secure a third pole position with 1: 14.3150-second lap ahead of Paul Joshua and Tony Hynes rounding out the front row. Aaiden Coote (1988 Honda VFR750R) was simply unstoppable in the first race with an all the way win ahead of Tony Hynes (Suzuki GSX-R750) with John Riley (1988 HondaVFR750R) in third place. Coote put on another dominant display in the second race, Hynes was again second with Glen Ottley taking the third spot. 1st place went to Ex-WA rider Aaiden Coote with 50 points, 2nd was Tony Hynes on 40 points and third Glen Ottley with 35 points.

There were two non-championship races over the weekend, in the Period 2 & Period 3 Lightweight & Junior Tony Hynes on the 1938 Series ‘A’ Vincent took out all three races in convincing fashion.

In the Period 6 Ultra Lightweight & Period 6 Lightweight Sam Clarke and Scott Topping fought it out at the pointy end with Clarke winning the first two races before Topping took a hard-fought victory with Mark Laing-Hughes in the third spot. 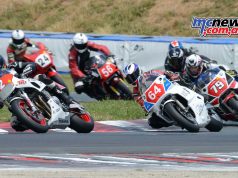 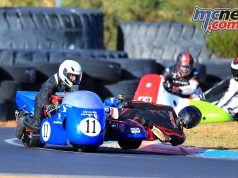 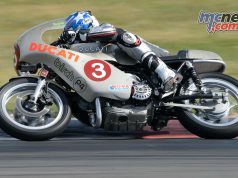