Scott Redding claimed his third pole position of the Bennetts British Superbike Championship season with a last lap dash in the final two minutes of the final Datatag Qualifying session as he snatched the top spot from Tommy Bridewell at Thruxton.

The final stage of Qualifying was extended to 12 minutes when light rain began to fall, but with it stopping and starting during the crucial final stage, the battle for pole went down to the wire with the fastest rider changing eight times before the chequered flag.

Initially Christian Iddon had tried to set an early lap time and he went to the top of the timing screens for Tyco BMW ahead of Bridewell, but a few minutes later Andrew Irwin had surged to the top, however just 60 seconds later his brother Glenn claimed the leading position.

Redding had been tentative initially when the session got underway but then with six minutes on the clock he fired the Be Wiser Ducati to the top of the times, but he didn’t maintain it to the finish as Bridewell then posted his fastest lap of the session to put the Oxford Racing Ducati ahead of the opposition.

However Redding was ready to go for another time attack in the fight for pole position and he launched ahead with less than two minutes on the clock to bag the top time in Datatag Qualifying ahead of Bridewell.

“I am so happy to be on pole here. These guys [Bridewell and Hickman] sound like they had a strategy going on in that session listening to what they just said! I haven’t got time for strategies this weekend, with zero laps around here before I just need to try and learn everything I can at every moment. I’m making mistakes, but I’m pushing on the limit. Then it started raining and basically the guys in the team said to me this track is super grippy in the rain so you should be alright, so I took that on the shoulder and I took the chance. I saw some of the boys putting hands up and I saw Tommy going out on his used tyre; seeing all these things I just thought to myself I’m going to do my own thing. I was going to go in the pits but then I saw Irwin go in, but I decided to just go and take a chance. I stuck it into Church, it was raining a bit, and I had both wheels sliding but I just thought to myself “hold it for one more lap. To come away with the pole was something I didn’t real expect today, but for sure something that I wanted. I have been working on race distance as I hear a lot of talk about saving the tyres and I was in a rhythm and I think that helped. I am happy and now I am looking forward to some good races tomorrow!”

Peter Hickman had been moving back up the order in the closing stages after a positive start and he was able to seal his second front row qualifying performance of the season.

Josh Brookes will head the second row; the Be Wiser Ducati rider decided to hold out in the opening stages of the session but he was able to move into fourth, pushing the racing brothers Andrew and Glenn into fifth and sixth respectively.

Ryan Vickers had his strongest qualifying performance of his rookie season in seventh place ahead of Jason O’Halloran and Iddon who completed the riders in Q3 for Tyco BMW.

However it was disappointment for Tarran Mackenzie who crashed out in the opening stage of Datatag Qualifying, sustaining a left wrist fracture, the same injury sustained by Joe Francis, which both riders now unfit ahead of tomorrow’s two races.

Kyle Ryde took the first Dickies British Supersport GP2 win on track at Thruxton, slipping past Supersport class winner Jack Kennedy at the final corner. Launching off the line was the Integro Yamaha of Brad Jones but by the time they crossed the line for the first time series leader Kennedy had found a way through as had Ryde.

Remaining in a tense game of follow the leader for much of the race, title challenger Alastair Seeley had moved up to fourth by lap six before the Safety Car was deployed just one lap later. Pitting back in at the start of the tenth lap, it was a three lap battle for the win.

Coming down to the final corner on the final lap, Ryde was able to slice his way through Kennedy to take the victory on track and secure the GP2 machine. Kennedy finished top Supersport machine whilst Jones was able to hold off a late challenge from Seeley to take second.

Billy McConnell powered his OMG Racing Suzuki to pole position at Thruxton, lapping under the existing lap record by over half a second. It was an action-packed 30 minute session but it was McConnell leading the way for the majority, holding a commanding lead for much of qualifying. A run of fast laps from current series leader Richard Cooper saw him move up to second, just 0.094s behind the pole man with Taylor Mackenzie completing the front row in third. Lee Jackson heads the second row ahead of Andy Reid and Luke Jones. 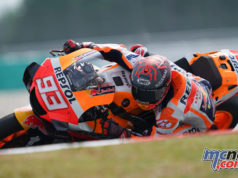