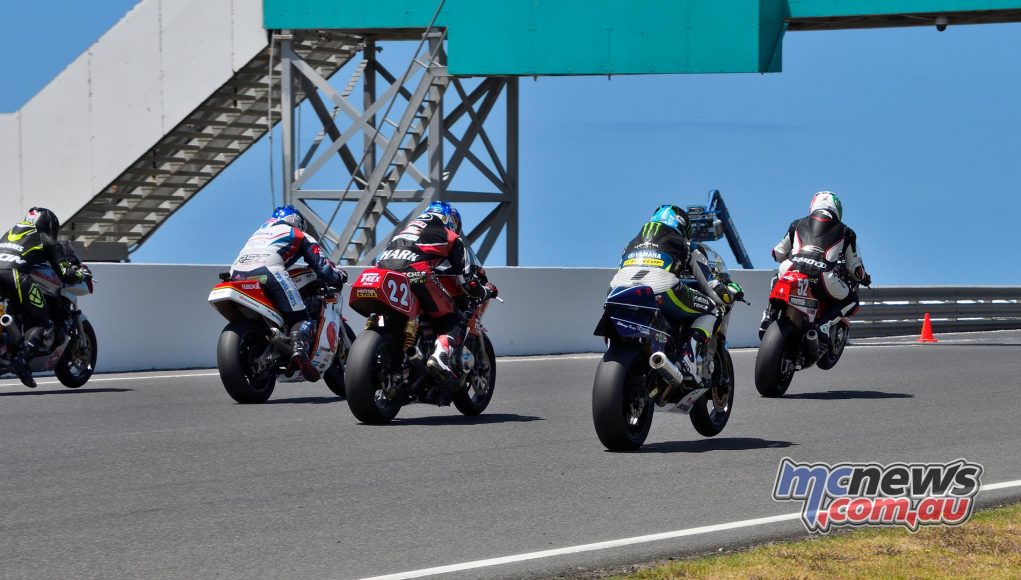 Weather conditions were much friendlier to all-comers this morning at Phillip Island. Temperatures were nudging the mid 20s today, rather than the furnace-like 40-degree that toasted competitors and their machines on Friday.

Ahead of the first of the premier category International Challenge events for the 2019 Island Classic pit-lane was a flurry of activity as riders and mechanics fettled their fast but fickle mounts. This event is always a battle to keep the highly tuned historic machines going for the 4 x 6-lap races. Not only last-minute fixes and patch up jobs, but even complete gearbox and engine rebuilds are sometimes required during the event.

Aaron Morris looked like the red hot favourite on the qualifying pace form guide, but with many of his competitors being held back during practice with mechanical gremlins, the rest of the field was bouned to get closer come race day.

Paul Byrne, David Johnson, Jed Metcher, Beau Beaton, Steve Martin and Shawn Giles were all in the top ten fastest qualifiers and it was looking as though it would take a momentous effort from Team USA if they were to take it up to the home team in the battle for overall International Challenge Team honours.

American newcomer and four-time AMA Superbike Champion Josh Hayes is still learning the intricacies of the challenging 4445 metres of blacktop that make up the Phillip Island Grand Prix Circuit.

Jason Pridmore rode last year and thus now has good experience of the circuit and the whole Team America challenge in regards to machinery and back-up has stepped up a notch. Steve Rapp was still building speed after losing track time with mechanical problems, Larry Pegram also still making progress and looking likely to get faster as the event progresses.

The strengthened Team USA has helped to partly fill some of the void left by the absence of Team UK and their brace of star riders, along with the beautiful Roger Winfield prepared machinery that had become a much loved staple of the Island Classic. Still, the absence of a credible Team UK is keenly felt and they are sorely missed. That said, the crowd was still looking pretty strong and there was still a great atmosphere surrounding the event.

None of the Team New Zealand pilots had made it inside the qualifying top ten, such is the competitiveness of the field again this year. Temporary Kiwi Alex Phillis had qualifieid 11th ahead of team-mate Jay Lawrence and this years star Team NZ recruit for 2019, triple BSB Superbike Champion John Reynolds.

They jumped off the line at 1220 in near perfect conditions but Jason Pridmore clutch bit a fraction too early and thus was hit with time penalty to be added to his race time.

David Johnson led the field through Southern Loop for the first time ahead of Jed Metcher while through the back section it was Paul Byrne, Jason Pridmore and Josh Hayes all giving chase to that duo as Beau Beaton, Alex Phillis and Shawn Giles also gave chase.

A massive high-side for Jason Pridmore at turn 11 saw the red flag brought out as other riders also ended up in the kitty litter. Pridmore had fallen heavily and also caught up in the melee was Beau Beaton. The Aussie copped a major battering in the tumble and looked perhaps worse off than Pridmore. Both riders were treated on the circuit by medical staff, they were conscious, but in a world of hurt…

One person thankful for the re-start was pole-sitter Aaron Morris. He had a terrible start first time around but got away from the line much better in this one only to get swamped on the run toward turn one as Jed Metcher swept through to the lead from with David Johnson and Alex Phillis also forging past Morris by Southern Loop.

Metcher capitalised on his clear air at the front of the field to eke out a small buffer over David Johnson over the first lap and a half but then Aaron Morris wound up the big Katana and reeled in first Johnson, then Metcher to take the race lead. Morris put in a 1m36.789 on that first flying lap on his way to take the race lead, more than a second faster than any other rider in the field on that lap.

Josh Hayes was learning the circuit and his machine fast and by half race distance was really winding it up! Hayes had moved past Shawn Giles and Alex Phillis as he worked his way forward and then took David Johnson for third place just before they got the last lap board.

With one lap to go it was Morris leading Metcher by almost a second with Hayes equidistant back in third place. The trio were still in that order when they got the chequered flag, with David Johnson fourth and Shawn Giles fifth.

Early word was that while both Pridmore and Beaton were in no danger, they had suffered injuries and thus were heading off to hospital for further investigation of their injuries. It seemed unlikely they would take any further part in today’s proceedings.

Jed Metcher is hoping to come back stronger this afternoon to better take the battle up to Morris.

“The T-Rex Honda feels a lot better, but I found the limit quite quickly. I almost lost the front at turn four as I turned up the wick when Aaron Morris went by me. I just simply didn’t have the rear edge grip to get the drive and stay with him. We will work on those issues ahead of the second race later on this afternoon and work a bit more on the setup of the bike. We are aiming to get a bit more rear edge grip and try and get the bike to turn a bit faster in the middle of the turn and hopefully we can dip into the 36’s.”

Features Phil Aynsley - February 21, 2020
Montesa 125 Sprint With Phil Aynsley Sometimes a bike’s looks strike you so strongly that any...