by Trev
in Triumph, Triumph News, Triumph Reviews
A A
Share on FacebookShare on TwitterShare

The return of the Scrambler style motorcycle has certainly been a big news story in recent years. Some are little more than a styling exercise, while others, like Triumph’s new 1200 Scrambler XE, claim to be ready to bang in the bush.

Triumph Australia were keen to have us test their new Scrambler’s mettle in the dirt and set up a series of special tests in an off-road training area, along with a good dirt loop that took in ruts, deep sand and a few obstacles along the way.

We only tested the more off-road oriented XE model but both that and the more road focussed XC roll on tasty spoked Akront (there is a blast from the past), rims that suit tubeless tyres. The XE gets an off-road spec’ 21×2.15 front married to a 17×4.25” at the rear along with an extra ‘Off-Road Pro’ added to the riding modes that puts it all down to you, with traction off and the ABS off.

Off road we ran on chunky Pirelli Scorpion Rally rubber which performed admirably and looked the business. Obviously if running these for road work you might as well just sit in the corner and tear up $50 notes every 10 minutes, as they will be toasted in no time, drugs would be a cheaper habit…. Their purchase off-road though was excellent and allowed for some serious fun in the dirt, and well it was Triumph’s $50 bills I was tearing up every ten minutes…

It was genuinely amazing how well the XE handled a very rough dirt track, ruts and even a bit of sand.  A very generous and well controlled 250 mm of suspension travel is what endows it with genuine off-road chops.

I am currently heavier than the average bear and despite not holding back on the dirt loop I never had the suspension g-out or do anything untoward. To be honest, I probably went harder than I really should of, but that massive 250 mm of suspension travel just soaked everything up and lured me into going harder and harder. Curiously some riders that must have been 30kg lighter than me did manage to bottom them out, but I used my legs and flowed with the bike, and was rewarded with a compliant and controlled ride. If you are unlucky enough to hit the pegs they do fold on impact which is handy.

To put it into perspective, the XE has more travel than any multi-cylinder adventure bike I can think of, which really is truly remarkable and clearly underlines that this Scrambler, can damn well scramble! It has a full 100mm more travel than Ducati’s Scrambler and Indian’s new FTR1200. This means that with all that travel to play with there is enough scope in the stroke to allow for nice smooth and supple initial travel, that then steadily firms up through the compression to retain control. If the damping control was not great, this bike would suffer, but thankfully it works well, really well.

The latest generation electronic suspension can deliver almost the best of both worlds, automatically tuning itself to the riding mode and role selected. The Scrambler has eschewed this technology in place of conventional suspension.

While this might be a boon for long-term owners that won’t have to worry about expensive actuators and the like shitting themselves when out of warranty, it did have me a little worried as to the road performance of the suspenders. With so much travel surely the suspension would be all over the shop on the road?

I need not have worried. With the clickers adjusted to suit the road ride, and by making my inputs smooth, the damping throughout the stroke remained very well controlled. No doubt the XC model with its more road tuned 200mm of travel would be more fun on the tarmac if having a real lairy crack, but the XE does more than okay, and much better than I expected. For the tarmac we swapped to more road-oriented Tourance rubber which was a welcome change to better enjoy the Great Ocean Road.

With that much suspension travel then surely you need a step-ladder to reach the seat? No, at 870mm and with a very slim girth, throwing a leg over the Scrambler is also easier than on any multi-cylinder pukka adventure bike. The same goes for manoeuvring in the car park.  It is only just over 200kg dry, so is a relative lightweight considering its engine capacity.

Can the Scrambler XE really take the place for a full-size adventure bike?

Those same svelte lines and lack of bodywork that make it so manageable, and attractive, also mean that when it comes to serious long-distance touring you have no real weather protection and limited amenity for convenient luggage options.  You can work around it of course, particularly if traveling solo, but that is probably the primary factor that stops the Scrambler being long-distance adventure capable. Well that, and its modest 16-litre fuel capacity.

Off-road though I reckon the Scrambler XE has the measure of a lot of adventure bikes. That awesome suspension combined with what feels like a fairly low centre of gravity, a very long swingarm, 32mm longer than on the XC model in fact, and that 21-inch front, helps make the Triumph is a willing partner for some pretty serious off-road fun. The XE also sports much wider bars than its more road focussed sibling.

The brakes are proper serious M50 Monobloc Brembos lifted straight from the latest Speed Triple, but the stroke through the adjustable lever is progressive enough for them to not be a handicap off-road.

And what about the engine?

You could not get two engines more different from the same stable than Triumph’s effervescent fizzing ADHD 800cc triple and the big loping parallel-twin that powers the 1200 Scrambler.

The Scrambler engine feels b-i-g. Triumph obviously engineered this donk with a big slab of crank weight to give it that feel. This engine, in slightly differing states of tune, is used across a wide gamut of Triumph models. Even though the Scrambler apparently gets a ‘low intertia’ crank and a lighter alternator, you can really feel its big pair of balls swaggering through the crankcases.

In Scrambler guise the 270-degree crank is limited to 7500rpm, that’s 500rpm higher than in the T120, but its best work is still done off the bottom and into the mid-range. Its smooth all the way to red-line, and makes its maximum 90 horsepower at 7400rpm but this motor is all about torque. It grunts off the bottom with that aforementioned satisfyingly heavy gait, which really adds to the character of the machine.

Some might think I am bagging this characteristic of the motor, but in fact it is what really charms me to the driveline.  It makes the Scrambler stand out from the pack somewhat amongst its contemporaries. Triumph’s spec’ sheets quote 110 Nm at 3,950 rpm, but it feels more impressive than that.

The six-speed box works well enough and the throttle response changes with the riding mode selected. Dampening things down when off-road, and livening things up in the sportier modes. The torque-assist slipper clutch is ridiculously light but somehow still manages to offer reasonable feel at the lever. This is a bike for those that like to short-shift, ride a smooth wave of torque, and feel big pistons banging away beneath them from low rpm.

The two-into-two pipes look as though they might make your legs a little warm. And that they do! During the off-road riding my DriRider Adventure pants bunched up a little around the knee due to the seating position, thus it wasn’t long before I started sitting a bit bow legged to get them away from those stainless steel headers as my pants started to smell of burning fabric!

The pipes do sound pretty good though, in fact they were surprisingly loud when watching the other boys get up it from the roadside during photo stops. While riding, you don’t get as much aural pleasure though, as the pipes exit way behind you. That’s a great pity, but at least onlookers do get to enjoy a wonderful big-bore timbre as you blast past.

Scramblers once were fairly basic affairs but Triumph have thrown pretty much everything at the new Scrambler 1200.

Second generation TFT screens have all the bells and whistles. Although Triumph’s long awaited bluetooth functionality, allowing for navigation prompts from your phone to be displayed on the screen, now seems around 12 months behind their original schedule.

Apparently this will come in an update later this year, and will enable to select your route on the ‘My Triumph’ app and then let the bike guide you the way, complete with phone operation from the switchgear too, via the five-way joystick on left bar. This integrated GPS functionality is already available on many other European machines. A unique twist for the Triumph though is that the entire instrument binnacle can be tilted up and down, to help suit the heights of different riders.

Triumph are about to one-up the others though with their integrated Go-Pro functionality that will also come later in the year. This will enable riders to control their Go-Pro via the five-way joystick also.

Riding modes, lean-angle sensitive ABS and IMU driven traction control is all standard, as is a very convenient one-touch cruise control. All the switchgear is back-lit which is a great feature.  Keyless ignition, heated grips (standard on XE but optional on XC), and a 5-volt USB charging port under the seat are also included. Curiously though, a great safety item like tyre pressure monitoring is an optional extra.

LED lighting is standard throughout and for those that want to trick out their bikes Triumph have their normal range of inspiration kits ready to add to the Scrambler even before you roll out of the showroom. The ‘Escape’ kit adds a heap of practicality with handsome panniers and some other bits and pieces for $2664.55, while the ‘Extreme’ kit will set you back $3278 and continues the more stripped back look with added bling.  In fact Triumph have over 80 different accessories you can throw at the Scrambler.

As they roll out of the showroom stock the 1200 Scrambler XE will set you back $21,700,  a $1400 premium over the more street oriented XC model. Both prices are plus on road costs.

The drivetrain is solid and well proven with long service intervals and should just about go forever. It is a safe bet and one that I think will age very well indeed. I suspect it will really grow on anyone that takes one home to put in their garage as it boasts a charisma missing from so many modern machines. You can compare the specifications of the two Scrambler 1200 models below.

FEATURES EXCLUSIVE TO THE XE 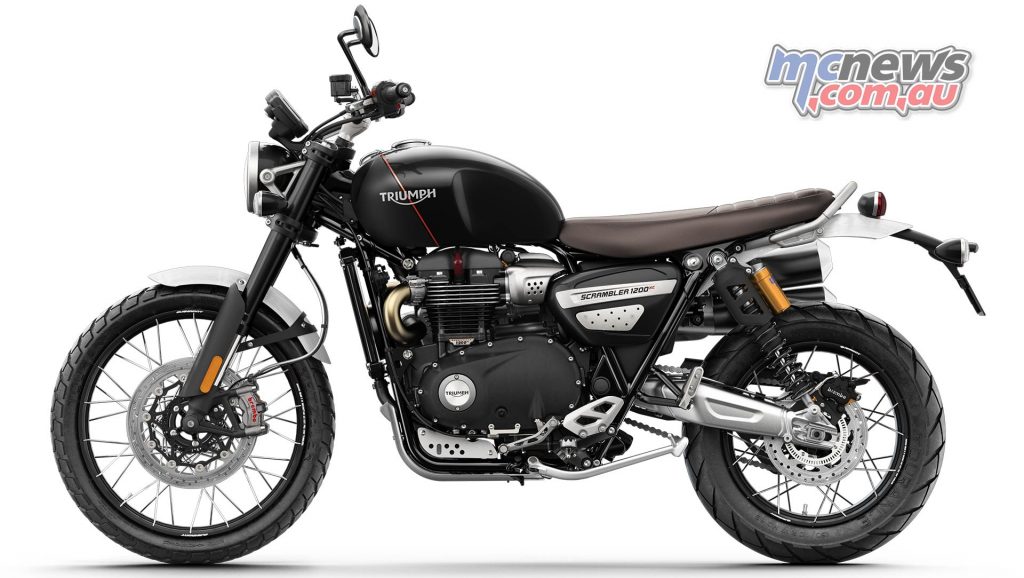 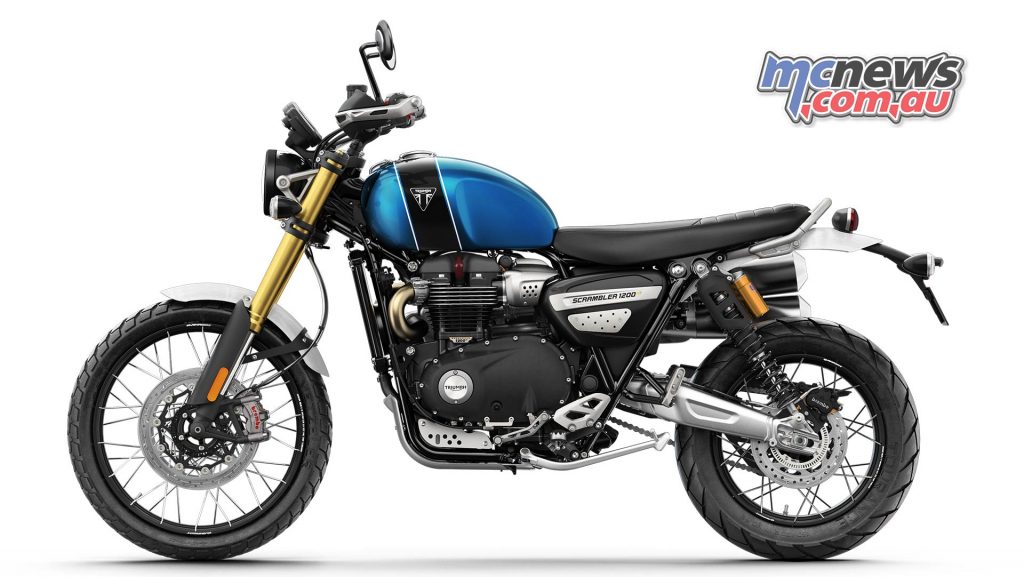