Alvaro Bautista has claimed his 12th win of the season, with massive crowds turning out to cheer on the Spaniard on his home turf, with a dominant performance in Race 1 putting the rider back on form in the 2019 MOTUL FIM Superbike World Championship, with nearest challenger in the title race Jonathan Rea involved in a last lap-last corner fracas with Alex Lowes, that later saw penalties remove his podium placing.

Taking the lead between Turn 4 and 5 on the opening lap, nobody challenged Alvaro Bautista for the rest of the race, as the Spaniard set a scorching pace. Getting into a rhythm early on, Bautista never looked in doubt of winning at Jerez for the first time since his first ever World Championship victory back in 2006 in 125cc Grand Prix.

Becoming the first Spanish rider to win at Jerez, Bautista made it only the fifth occasion where a Spanish rider has won on Spanish soil – of which four have been achieved by Alvaro himself. Along with this, he faces more records, as one more win will level him overall in the wins table with Eugene Laverty and Aaron Slight, whilst winning the remaining two races will see him equal the number of wins by Scott Russell, John Kocinski and Ben Spies – all of which won championships.

“I’m really happy with this great win today. This morning we made a few small changes to the Panigale V4 R which allowed me to improve the feeling. In the Superpole we did a very fast time and managed to get onto the front row, which was our aim. In these conditions, because of the high temperature, I used up a lot of energy and also had to manage the tyre wear in the best way possible. On the opening lap I took the lead of the race and made my own pace, which I was able to administer until the chequered flag. I’m very happy to win again after Imola, and I’m proud to be the first Spanish rider to win an SBK race here at Jerez, in front of all my family, friends and fans. I want to dedicate this win to my grandfather, who passed away a few days ago, for sure he gave me extra motivation for this victory.”

Unfortunately, his team-mate Chaz Davies was unable to get in amongst the fight for the leading positions. Starting from eleventh place on the grid, the 32-year-old Welshman struggled throughout the race, showing a scarce feeling with his bike, and as a result he was not able to go any higher than seventh place.

“Today’s race was a tough one. After not getting a particularly good start, in the early laps the feeling with the bike wasn’t very good and I struggled to get into the rhythm. Then, in the middle part of the race I found myself a bit behind the group that was fighting for fifth place, but I couldn’t catch them. Unfortunately, there isn’t much to say, for me it was complicated just to get to the end of the race. The only positive aspect is that it was useful to do 20 laps in these conditions which allowed us to get a lot of information. We’ll have a look at all the data with the engineers and hopefully can come up with something good for tomorrow.”

After his tangle with Alex Lowes, Jonathan Rea has been handed penalties as a consequence. The four-time WorldSBK champion made a rash move on the Yamaha man at the final corner on the final lap, meaning that he has been dropped one position in the overall classification.

Additionally, the Northern Irishman has been handed a back of the grid start for his on-track escapade in Race 1. This promotes Marco Melandri to the podium in Race 1 – his second of the season, whilst ironically, Alex Lowes will benefit from a front row start.

“Our bike, with grip, was working incredibly well today, especially in the morning in the cooler conditions. I was able to build into that Superpole lap with a three stop strategy – first with a race tyre, then with a pre-qualifier and then at the end with the qualifying tyre. With the temperatures rising in the afternoon, maybe a combination of that, or what we changed on the rear of the bike a little, I really struggled right at the apex of the corners to turn around. It was putting so much stress on the front tyre. I tried to do the best I could, but when Alvaro came past it was on a completely different rhythm. I found myself on a similar pace to Alex. On the last lap I tried to be as close as possible to do something in the last corner. I saw him going wide on the racing line so I decided to do a cutback and go to the inside. Unfortunately at that point he was fully committed to the corner, I did not got through far enough, we had contact and he went down. I am really sorry for ending his race but it was a real racing accident; last lap, last corner battle.”

Both Pata Yamaha WorldSBK riders were involved in a race long battle for the podium in today’s opening WorldSBK encounter in Jerez. But while Michael van der Mark ended the day celebrating a superb run to second place, Alex Lowes was left battered and bruised.

“The bike felt really good in Superpole, but I made a couple of mistakes than cost me a few tenths and that meant I started from the third row of the grid today. I got a good start, managed to make up quite a few places in the opening laps and then quickly settled into a good rhythm as I tried to conserve my tyres. When I passed Alex I was struggling a bit with the front and having to ride a bit differently, but I was still able to close on Johnny and then pass him for second. I tried to pull a gap straight away, but he managed to stay with me for a couple of laps before I could get away from him. The bike was really good today; the guys have done an amazing job and the package has improved, but we still need to find a little more improvement with the front ahead of the two races tomorrow.”

“Obviously I’m gutted with the eventual outcome of the race. I was struggling with the bike a little bit in the race, which meant I wasn’t able to stay with Michael, but I felt I could be consistent with the pace I had. It was a good battle with Johnny; I felt I was a bit stronger than him and with three laps to go managed to get in front. I put in a good, solid, clean last lap and I felt like I had the beating of Johnny but then he made a big error of judgement in the final corner and took me straight off the bike. It was a decent hit and I’m pretty sore right now. He’s been penalised for the move, but that doesn’t change the fact that I missed out on the podium and 16 really important points, which is a shame. Anyway, there are a few things we can improve on the bike; my pace has been strong all weekend and, luckily, we have two races tomorrow in which to try and make up for today’s loss. A disappointing result, but there are also plenty of positives we can take away from today.”

“Obviously it’s not the same getting a podium finish this way rather than being in a straight race for it, but I see this as like a present for the hard work of everyone in the team and at Yamaha that we did and are still doing. This result, even if it was a bit of a gift, will only motivate us further to make improvements so that, once again, we’re in a position to really fight for the podium on track.”

The WorldSSP Tissot Superpole session saw Federico Caricasulo take a sixth career pole position, his first since this season’s opening round at Phillip Island. The Italian took pole with a new lap record too, at a circuit he won at from pole in 2017. Can he achieve it again on Sunday?

Teammate Krummenacher came second in the session but crashed immediately after his fast lap, up at Turn 1. Just under two tenths of a second split the battling Yamaha teammates ahead of their race tomorrow. Lucas Mahias (Kawasaki Puccetti Racing) took a tumble on the exit of Turn 2 but remained third, to complete the front row.

Fourth place sees Raffaele De Rosa take another strong grid position, as he will look to fight for his first WorldSSP win from row two. Thomas Gradinger took fifth place, as the Austrian consolidates his front running pace, albeit nearly a second from Caricasulo’s blistering pole time. Completing the second row is Hikari Okubo who, like his teammate, suffered a slow crash in the session, at Turn 6. He was OK and got back out to improve his time.

Kawasaki seemed to have found something at Jerez, as Ayrton Badovini heads up row three in seventh place, with championship challenger Jules Cluzel only managing eighth position, after suffering a fast crash at the penultimate corner. Ninth position went to Isaac Viñales as he was top Spaniard at home, whilst Peter Sebestyen took top Honda honours on his way to a career best WorldSSP qualifying position.

The traditional frenetic WorldSSP300 saw an exciting last lap with numerous lead changes as the leading group battled for class supremacy. Despite looking like the race was going to go to the reigning champion Ana Carrasco, the victory went to Marc Garcia, who made the most of the chaos that ensued in the final corner. 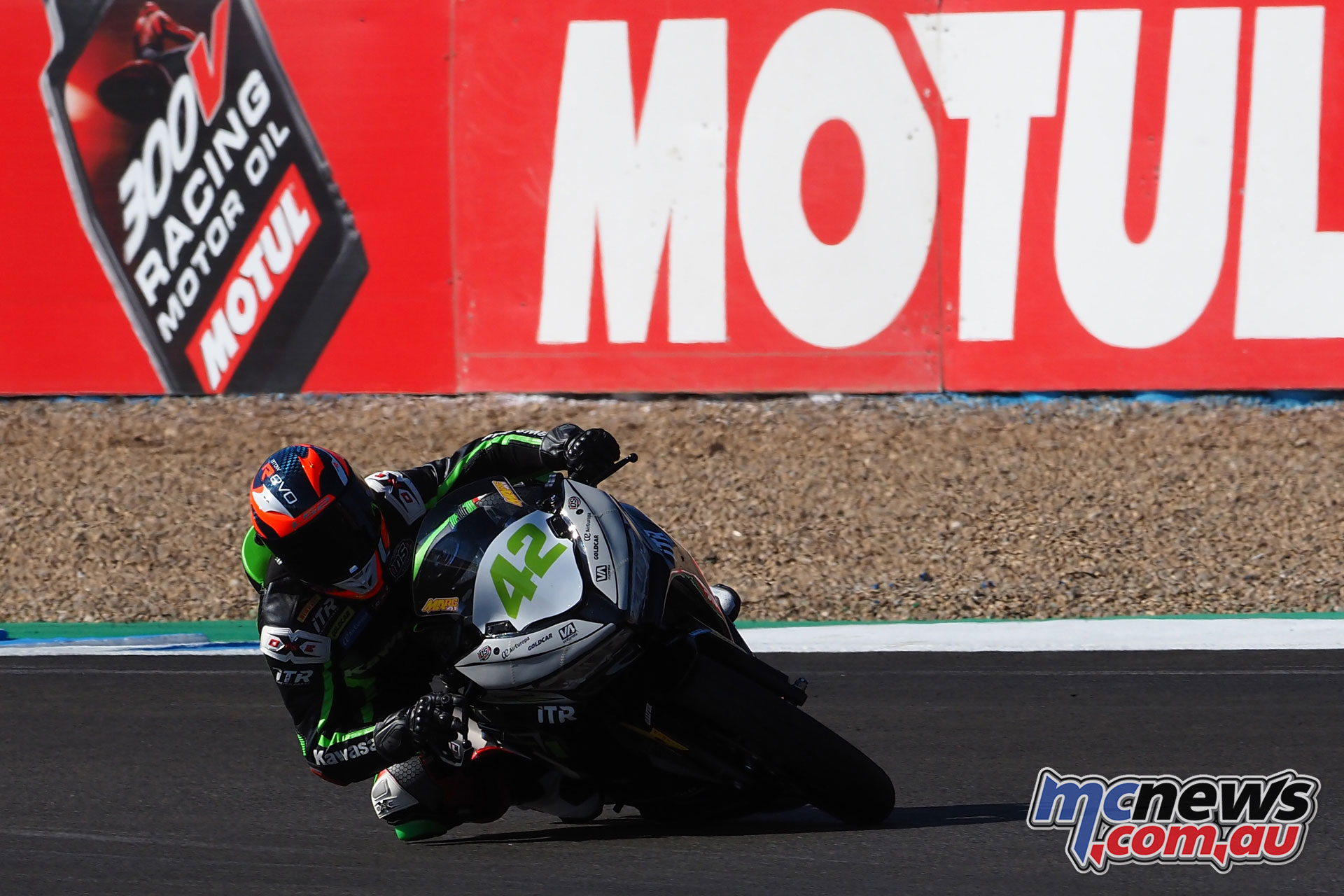 With the race getting underway, it was Victor Steeman who led into the first turn, although Galang Hendra Pratama took the lead half way through the opening lap. Championship leader Manuel Gonzalez was right in the mix too, whilst Ana Carrasco was also looking for a way into the leading positions. All the time, quietly going about his race strategy, 2017 champion Marc Garcia was keeping out of trouble and riding a clean race.

However, as so often with WorldSSP300, it would come down to the final lap. All race long, Hendra Pratama had been taking an acute line into Turn 6 but on the final lap, when it mattered, he couldn’t make his way through. At the front, Ana Carrasco was looking at her first win, as Scott Deroue also tried to find his way through.

Marc Garcia was right in the mix though in third, and going into the final corner, he made a brave pass on the inside to push his way ahead. Despite slipstreaming to the line from Deroue, Garcia couldn’t be toppled and took his first win of the season at a track at which he clinched his 2017 WorldSSP300 title, whilst an unfortunate Carrasco completed the podium in third. It is the first podium in WorldSSP300 history to feature two former champions of the class!

Behind them, a whole raft of riders who had featured in the leading group in the frantic pace of the WorldSSP300 race. Manuel Gonzalez was beaten to the final podium position by Carrasco and thus took fourth, with Andy Verdoïa, Hendra Pratama, Jan-Ole Jahnig, Hugo De Cancellis, Jeffrey Buis (MTM Racing Team) and Unai Orradrecompleting the top ten.

Going into Sunday, Gonzalez leads Deroue in the championship by a narrow margin of just seven points!