What is a ‘sports tourer’ these days anyway? Is it still something that bridges the gap between full-on sports-bikes and long haul pillion-friendly tourers? At a time when said full on race-replica sports bikes are becoming a bit less relevant to a lot of road riders, you’d be forgiven for thinking that this category could be where a lot of the attention and demand is diverted towards.

I mean they make more sense right? Something that can commute comfortably, handle real world roads and potholes without breaking a sweat, take a weekend trip with the missus on the back and still hold its own against the average scratcher up your favourite set of twistys. So if that’s the brief, how does the Tracer 900 GT deliver?

First impressions when you sit on board are that it’s really quite an upright seating position, nice and slim between your knees too. The seat is firm, but not too hard, and it feels angled slightly forward, positioning the rider close to the tank.

Steering and controls are impressively light (especially the superb action of the slipper clutch), and when on the move you are first struck by how nimble it feels. It’s almost dirt-bike like in its agility and feel. Plenty of steering lock too.

This is a bike that revels amongst traffic. Sure the bars are fairly wide, but not overly, so it’s a breeze to filter between lines of traffic on. And when you take the admittedly quite nice panniers off its an even slimmer profile..

There’s ample weather protection without it being over the top. Plenty to tuck in behind if you’re really getting belted down upon (which I did more than once this Melbourne Winter), but more often than not you’re comfortable sitting up – its almost an adventure bike riding position – fairly well protected from the wind and any light rain by the nice high screen.

The front cowl does a nice job of keeping the weather off your legs and the heated grips (my single favourite discovery in the past five years), work a treat. I’m not a massive fan of the scroll wheel controller on the right cluster that you need to use to turn them on, and then cycle through the three settings, but it works.

I’m just philosophically against having those type of controls, the ones that you do use when on the move, on your throttle hand side. Just for further clarity, the scroll wheel also cycles through your displays on the dash, changing from trip meter to temp etc, so to adjust the heated grip settings if you have it showing trip meter (which I assume most riders would), you need to do the following:

All with your right thumb, slightly further than you can comfortably reach without shifting your throttle hand. It’s not ideal. Given that you can’t change ride modes or Traction Control (TC) settings on the move (those controls are on the left cluster), I don’t see why those sets of controls aren’t just swapped so the ones you can change on the move are on the left cluster.

Other electronics work fine (including the cruise control), I reckon most riders will stick with the ‘STD’ map and traction control set to 1, they’re fine – the others are the buzzkill modes. My only other niggle here is that I reckon the TFT screen is a bit on the small side.

Maybe my eyes aren’t what they used to be (I mean I’m not that old..), but my instant reaction when I first turned it on was to squint. Those minor niggles aside – it’s comfy, nimble and offers good weather protection. That’s a tick from an all year commuter point of view.

Suspension wise its ever so slightly on the firm side without being harsh. I reckon it’s on point. Along with the colour coded side panniers mentioned earlier, the GT also gets fully-adjustable upside-down KYB forks. The rear shock is adjustable for rebound damping and the preload is remotely adjustable. Both ends work a treat with good feedback, while being more than capable of soaking up the everyday ordinariness that we’re served up as roads. Surface changes? Patches? Potholes? No drama. I reckon it would be more than up to remaining enjoyable even with a pillion and luggage.

The pillion is well catered for with sturdy grab rails and a seat that’s not towering above the rider – and those panniers are easy to get on and off from their mounts and offer a generous amount of space inside (22 litres each apparently). Plenty of space for an overnight trip for instance. I was getting 300km from a tank in cruise mode, a bit less when getting up it. It would be a very easy thing to clock up a couple of tanks on in a day.

And there’s plenty of power to handle two-up, fully-loaded pannier duties. I’m a big fan of the MT-09 triple and gearbox. The same drive-line that provided the shove for the somewhat unusual Niken I tested earlier this year, shines even moreso in the Tracer (where its pushing along a lot less bulk). It’s a gem.

Apparently its slightly more civilised than the original incarnation, but still offers plenty of character and ample grunt. It’s smooth from the bottom and just builds into a nice growl on the way through to its 11,500 redline. The bike punts out about 115 ponies at 10 grand, but peak torque arrives at just after 8.

I didn’t find myself often past peak torque to be honest as the mid-range is where it’s at with this one. The six-speed box’s quickshifter is basically flawless too. I found myself clutching past neutral and when changing at low revs just to smooth things out – probably more from habit than necessity – but once past a few thousand revs I didn’t bother with the clutch as its smoother than a smooth thing.

Doesn’t matter if you’re shifting at full or part throttle it just does its business. Brilliant. Still pretty happy to lift the front for some hijinx too… Love it. Could do with a bit more bark from the snug exhaust to my ears, but I like ‘em a bit loud.

The ABS stoppers work just fine and feel about the right spec for the overall package, they have a solid initial bite and more than enough power, while the lever offers plenty of feel and feedback. No problems there at all.

So all in all the ‘real world roads’ and ‘pillion duties’ boxes get ticks as well.

So what’s it like to punt along at pace? It’s a surprisingly good thing actually. Initially the seat felt a bit unusual with its forward slant – but it only took half-a-dozen corners on the Deans Marsh – Lorne run, I was starting to get along with it pretty well.

Even though the roads were still a little damp and there was quite a bit of bark around, I was punting along at a reasonable pace in no time. Certainly not limited by the bike. I did find that when I put the balls of my feet up onto the pegs then the heels of my boots would hit the pillion peg mounts. That was a bit off-putting, but it didn’t actually really get in the way. I wear a size 9 A-Stars Toucan for what it’s worth (great boots btw).

The suspension gave me enough confidence to explore the limits to what I dared on the not so grippy surface. We didn’t get to peg down territory in the damp but probably wouldn’t have been far from it in the sections that were fully dry.

With even better rubber and a warm grippy road I reckon you could frighten a few sports bike riders. The suspension is up to it, without being proper top shelf stuff. I’d say all in all it strikes a pretty good balance between a surprisingly comfortable tourer and a decent scratching proposition. So the ‘sports’ part of the equation also gets a tick.

I really do like the Tracer GT as an all-rounder. It’s quite a capable thing. It looks pretty decent to my eye too. I had plenty of positive comments from Joe public and riders alike when taking the pics. Great engine, great chassis and decent suspension. It is reasonably priced at just over 20k ride away, no more to pay, complete with panniers and the improved suspension over the base Tracer. It’s certainly a worthy option. A louder can and sportier rubber would liven it up even further.

Last thought is that I also can’t help but imagine what this bike might be like with another inch or more of travel, spoked rims with a full size front, and a redesigned exhaust for some more ground clearance. It feels quite like an F 850 GS at times with an even better engine, so much so that it couldn’t be that hard to turn it into a ripping mid-size adventure bike.. And that’s high praise as I rate the GS highly.

I’d wager the triple could have even more character than the soon to be released little Tenere, but I’ll have to wait to see if I get to throw a leg over one to know for sure. Is there room in their lin-eup for two adventure platforms? Probably not. Pity. Wonder if someone with some time on their hands might do a custom using Tenere bits.. If you do, let me know – I’d like to check it out 🙂 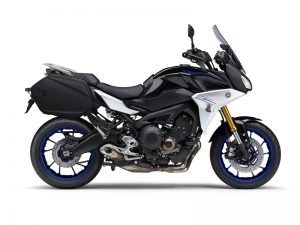 Wayne loves all things motorsport, but lives for two wheels. Mountain bikes, dirt bikes, adventure bikes, road bikes, race bikes, the lot. An ex riding coach and road racer wannabe who simultaneously ran out of talent and money. Rides about a million kilometres a year and has been known to enjoy an occasional wheelie.

Riders reflect on Misano qualifying and look to the race ahead