More details around Harley-Davidson’s expanding range for 2020 have emerged at EICMA, with further information released on the Pan America, as well as new Bronx models.

Both will feature a new Harley-Davidson powerplant, called the Revolution Max which will come in two capacity versions, a 975 cc for the Bronx streetfighter, and a 1250 cc version for the Pan America.

Revolution Max will be a 60-degree V-twin with liquid-cooling and dual down-draft throttle-bodies. The 975cc version is expected to produce 115 hp and 70 lbs-ft (95 Nm) of torque.

The 1250 Revolution Max is expected to produce 145 hp and 90 lbs-ft of torque (122 Nm), although these figures are all performance targets from Harley-Davidson, so we could expect to see some change as we get closer to the release date.

The Revolution Max will be run as a stressed member of the frame and will feature a counter-balancer to mitigate engine vibration, with Harley promising a ‘surge of high-rpm power’ with a more performance orientated design approach obviously being taken.

Harley have also announced they collaborated with Brembo to create a new radial monobloc four-piston caliper for these machines.

Both models feature dual front disc brakes with the new Brembo caliper and upside-down forks, as well as a monoshock rear.

A trellis-style sub-frame is visible on the Pan America and looks designed to feature plenty of luggage along with reasonable pillion perches.

Hand-guards and an adjustable screen are featured, along with crash bars that may be standard fitment and look well integrated into the Pan America. Hard panniers are also shown in some shots, and look to mount via integrated mounting points, alongside a pillion grab rail.

Final drive is chain on the Pan America, with a large digital display and cruise control switches on the left switchblock. A steering damper is also visible.

Styling is unique with Harley obviously keen to set themselves apart from the competition, while entering the highly competitive adventure-touring segment.

The Bronx features a belt final drive in the images provided, with the same switchblock as the Pan America with cruise control, and a single round digital dash.

Compression and rebound adjustment is also visible on the fork tops, with flat bars.

The headlight also looks to feature a DRL and may be an LED unit. 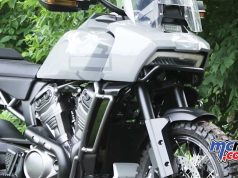