In the opening bout of the day Maxwell led almost every lap apart from the last couple that mattered.  Mike Jones shadowed him throughout before taking his opportunity on lap 18 of the 20-lap race and from there was never headed.

Cru Halliday had the pace to run with them throughout and crossed the line only a couple of tenths behind Maxwell; save for an early mistake by the #65 it may have indeed been a YRT 1-2.

Everyone is complaining about grip, and with Mikes Jones looking silky smooth and with a set-up on the YZF-R1M that allows him to look after his tyres, and still be fast on well worn tyres, he seems to have the advantage again here this weekend.

It is also worth noting that the YRT riders had put the least amount of laps on their tyres during qualifying, and thus have much fresher rubber than their competitors. This is due to the fact that they arrived at their race set-up quicker than the competition on Friday and made less wrong turns, thus could be protective of their tyres all day Saturday. A good job by the team.

Could that be the deciding factor that allows Jones to make it four in a row this afternoon? Or will this be Halliday’s turn to triumph..?  Or will Maxwell be able to find that final tweak that prolongs his tyre life long enough for victory?  Will Troy Herfoss or Bryan Staring find something over the lunch break that gives them the grip they desire?  And the BMW pairing of Josh Waters and Glenn Allerton were not far off… Will Sissis make that final step and surprise…?

Mike Jones got the jump from Wayne Maxwell and Bryan Staring but then Cru Halliday seemed to come from nowhere to gazump them both!  Yamaha 1-2!

Maxwell up the inside of Halliday at the final double-right but Halliday holds him out, the pair touch onto the main straight, that allowed Staring to slip past both of them! It’s on!

Meanwhile though unaware of that melee unfolding behind him Mike Jones had pulled a lead of eight-tenths. Maxwell then put in a 56.859 to break away from Staring and Halliday with what looked like ease. Next target Jones…

Maxwell closed on Jones within the space of lap, reeling him in and getting on terms with him in no time.    A little further back Herfoss was now hunting Halliday and Staring, throwing his hat in the ring for a podium.  Sissis was just behind that group also and not out of podium contention.

This time around it was Maxwell the hunter and Jones the prey, the opposite of what we saw in the opening bout this morning where Maxwell led for almost 18 laps before Jones did him in with a couple to go.

With 14 laps to run Jones and Maxwell had more than two-seconds on third placed Staring.  The DesmoSport Ducati man had Cru Halliday for close company while Herfoss, Sissis and Waters also chased them. At the start of the next lap though Halliday dived up the inside of Staring to take that third place and immediately pulled away. 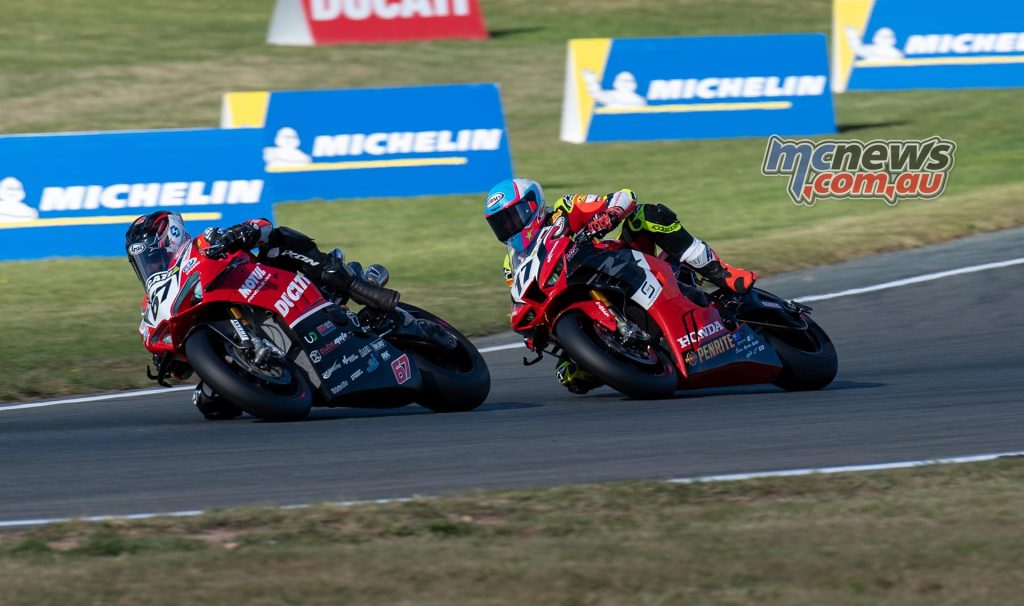 Herfoss then added further insult to the Western Australian, pushing him back to fifth. Sissis and Waters were also within striking distance and Staring was really struggling for grip.

At the front it was still Maxwell shadowing Jones, sitting right on the tail of that YRT bike, running line-astern with nothing to separate them.

By half-race distance the leading duo had more than three-seconds on third placed Halliday, who had Troy Herfoss right on his pipe.  That pair had broken away from Staring now, and the DesmoSport Ducati rider looked as though he was going to come under attack from both Sissis and Waters before this race was done.

Wayne Maxwell took Jones by surprise with a move underneath at the final turn to take the lead for the first time with eight laps to run. A little bit earlier than we might have expected him to make the move.

Herfoss stuck his nose in front of Halliday for third position but was in too hot and he lost a lot of time as he recovered, which in turn gave Halliday a huge amount of breathing space with six laps to run, Herf losing more than a second through that ill fated attempt.

Maxwell continued to lead Jones but the pace had not changed, the pair were still running 57.4s. As they came onto the main straight with three laps to run the oil flag was being waved… No hiccup for the riders though and they started to encounter lapped traffic late on that lap.

On the run to the last lap board Jones lost grip a little on the exit of the final turn and crossed the stripe two-tenths behind Maxwell.  Jones closed him up though and had a look into the fish hook but Maxwell closed the door…. Maxwell slides out of there, shuts the door on Jones into the final turn and the Ducati blasts out of the hole to propel Maxwell to victory in a thrilling tactical battle. 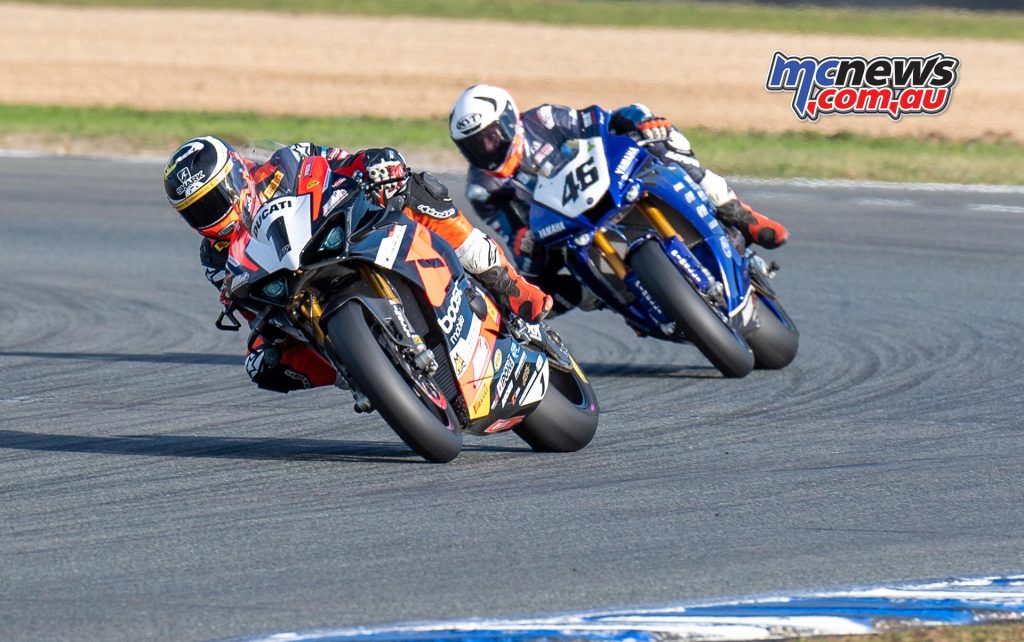 Mike Jones the round winner though courtesy of that point for pole position.

Cru Halliday third in that second bout over the resurgent Troy Herfoss. That pair only five-seconds behind the race winner.

Bryan Staring managed to stave off the advances of Sissis to hang on to fifth place by a nose but will not be happy with being 13-seconds slower than his championship rivals over the 20-lap race distance. Rear grip a problem for everyone this weekend but the DesmoSport Ducati seemed to struggle more than most with the issue.

Josh Waters again first BMW home ahead of team-mate Allerton while Anthony West made further progress with the set-up of the MotoGO Yamaha to finish ninth while Lachlan Epis rounded out the top ten ahead of Daniel Falzon.

Mike Jones sees his championship lead trimmed to a still very healthy 23-points as they head to Darwin. Maxwell now in second place with a seven-point buffer over third placed Staring, who has eight-points over Josh Waters, who in turn has four-points on Halliday.

We leave Wakefield Park still advantage Jones, but with Maxwell charged by a victory after the hiccups in Queensland and Troy Herfoss almost back up to full speed.  Halliday is showing good pace for YRT, and that kilometre long main straight in Darwin will allow the BMW men to stretch the long legs of that new M 1000 RR….  Can’t wait….

John Lytras again got away well to lead Ty Lynch, Scott Nicholson and Sean Condon away in the second and final 16-lap contest of the day for the Michelin sponsored Supersport class.

This time around though Lytras left them in his wake with a string of 59.9s as Lynch, Nicholson and Condon tripped each other and allowed the race one winner the clear air he needed to run his own race.

As the race approached the halfway point though 59.9s were no longer enough.  Lynch had started to close in on Lytras with 59.7s and 59.8s, Lytras responded though with a 59.7 of his own.  The fastest man on track at the halfway stage though was Scott Nicholson who lowered the marker to 59.384 to start reeling in Lynch and Lytras to put himself back in that game.

Lynch was only a couple of bike lengths away from Lytras with five laps to run. Lynch was exciting to watch, sideways into some of the turns and drifting out the other side, while Lytras looked tidy. That pair had broken away from Condon and Nicholson who would be left to fight their own battle over the final step on the rostrum.

With two laps to run Lytras had a couple of bike lengths on Lynch as they started to negotiate lapped traffic. At the last lap board Lynch was right on the tail of Lytras but the youngster showed no signs of feeling the pressure and managed to stretch away over the course of the final lap to take victory by half-a-second.

Sean Condon got the better of Scott Nicholson for that final step on the podium, that pair crossing the line a couple of seconds behind the leading duo.

Tom Bramich fifth fifth but almost 14-seconds behind the victor.

With that win Lytras extends his championship lead to 17-points over Lynch in what was a very strong round for the teenager.

A great return to competition for Condon after a seven year absence with that pole position and second place for the round by a single point over Lynch.

Cameron Dunker dropped the hammer when the lights went out to gap Glenn Nelson, Taiyo Aksu and Hayden Nelson on the opening lap but that trio came back at him on lap two to close back up on to his tail again.

Dunker stayed in the lead for the opening five laps though before Glenn Nelson slipped through to take his turn at the front, but nothing separated that top four at half race distance.

Taiyo Aksu took his turn at the front with just over two laps to go but Glenn Nelson gazumped him at turn one while Hayden Nelson pushed Dunker further back to fourth at the same juncture.

It was a Nelson 1-2 led by Glenn as they got the last lap board, Aksu third and Dunker fourth but you could throw a blanket over the four of them.  Aksu into the lead from Dunker as the order shuffled once again on that final lap.  Down to the final double-right Dunker slipped up the inside of Aksu, led them onto the main straight and got the run onto the straight to take victory.   Aksu second, Hayden Nelson third.

A perfect score for the round for Dunker, a 76-point haul for pole position and three victories, Aksu second and Glenn Nelson third.

Dunker now leads James Jacobs by 25-points, with Glenn Nelson a single point further back in third while Henry Snell slips to fourth.