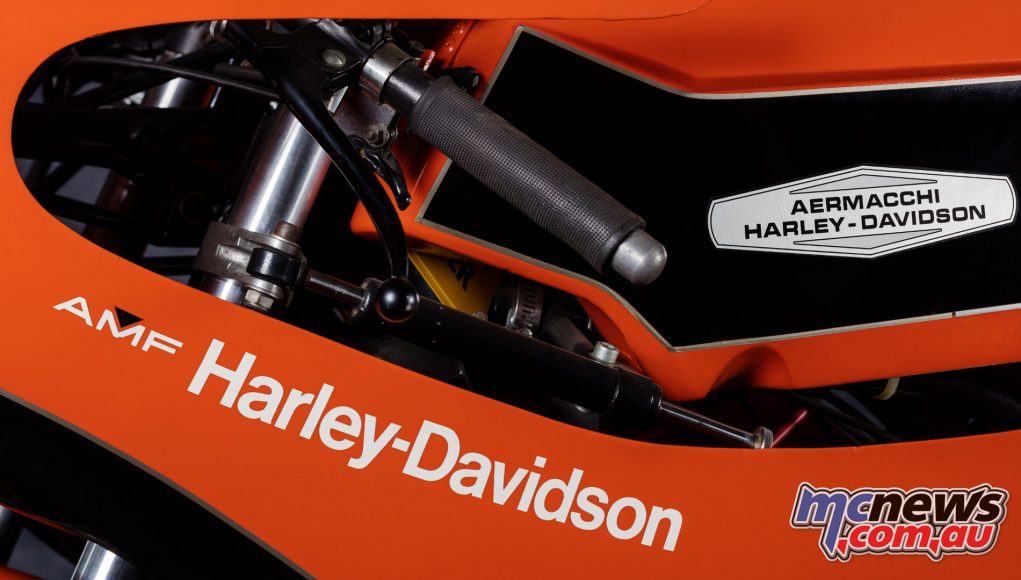 The name ‘Aermacchi’ tends to bring to mind their famous four-stroke horizontal single (or if you are of a different bent, their fabulous Schnieder Cup racing floatplanes). Two-stroke Grand Prix bikes, not so much.

Add the name ‘Harley-Davidson’ to the mix and you really are in strange territory. However in the mid ‘70s the company dominated the 250 class with three consecutive championships (plus one in the 350 class)!

Work was started on a two-stroke 250 in 1971 using the company’s Ala d’Oro 125 single as the basis. The air-cooled twin used a traditional piston port design.

Renzo Pasolini was the factory rider and in the 1972 season finished second to Jarno Saarinen by a single point, winning three races in the process. On a bored and stroked 350cc version he finished third to Agostini and Saarinen in the larger class. The 250 was good for 50hp and weighed 108kg.

The factory bikes received water-cooling in ’73, with privateer bikes following in ’74. Also in ’73 the bikes became known as ‘Aermacchi Harley-Davidson’ RR250/350s.

Development continued with Bimota frames appearing in ’77 and a rotary-valve motor in ’78, although HD sold its interest in Aermacchi to Cagiva before the new motor saw action. Cagiva continued to campaign both the 250 and 350 with Marco Luchinelli as their rider.

This bike was bought directly from the factory in 1976 by Spanish rider Jose Maria Mallol and raced in the domestic championship that year before being sold to José Benaigues, who in turn sold it to its present owner. Power was 58hp at 12,000rpm, with the bike boasting a top speed of 250km/h.

A 500cc twin was also developed from the 250, beginning in 1973. Development was shelved for two years after Pasolini’s death but in ’75 the now water-cooled motor was installed in a Bimota frame.

Of particular note was the use of four carburettors from the outset of the project. Output was 90hp at 9,000rpm and weight 127kg, offering a top speed of 280km/h. Another interesting feature were the twin front discs, which were gear driven to rotate in the opposite direction to the wheel. Only four 500s were built (this one was photographed in the Barber Museum) making them a very rare steed.

And for those wondering at the floatplane reference…

Features Phil Aynsley - February 21, 2020
Montesa 125 Sprint With Phil Aynsley Sometimes a bike’s looks strike you so strongly that any...

Features J Peter “The Bear” Thoeming - February 16, 2020
Around the world with The Bear - Part 20 The King of Every Kingdom Around the...

Features J Peter “The Bear” Thoeming - February 15, 2020
Around the world with The Bear - Part 19 The King of Every Kingdom Around the...