In front of a crowd of 57,807 fans inside AT&T Stadium, Monster Energy Supercross made its annual trip to Texas on Saturday night for the sixth round of the 2017 season. On a dramatic night of racing, Frenchman Marvin Musquin rode brilliantly to score his first-career 450SX Class victory with a dominant wire-to-wire effort aboard his Team Red Bull KTM Factory Racing machine.

When the gate dropped for the 450SX Class Main Event it appeared as though Monster Energy/Yamalube/Chaparral/Yamaha Financial Services/Yamaha Factory Racing’s Cooper Webb would become the first rider to earn multiple SupercrossLive.com Holeshot Awards this season. However, a downed rider off the start forced officials to throw the red flag, which immediately brought the race to a halt and forced a restart. As the 22-rider field launched off of the starting line for the restart it was Musquin who captured the holeshot and put his KTM out front for the first time in 2017, narrowly edging out RCH/Yoshimura/Suzuki Factory Racing’s Justin Bogle and Webb. Team Red Bull KTM Factory Racing rider and championship leader Ryan Dungey was buried outside of the top-10 following his worst start of the season. 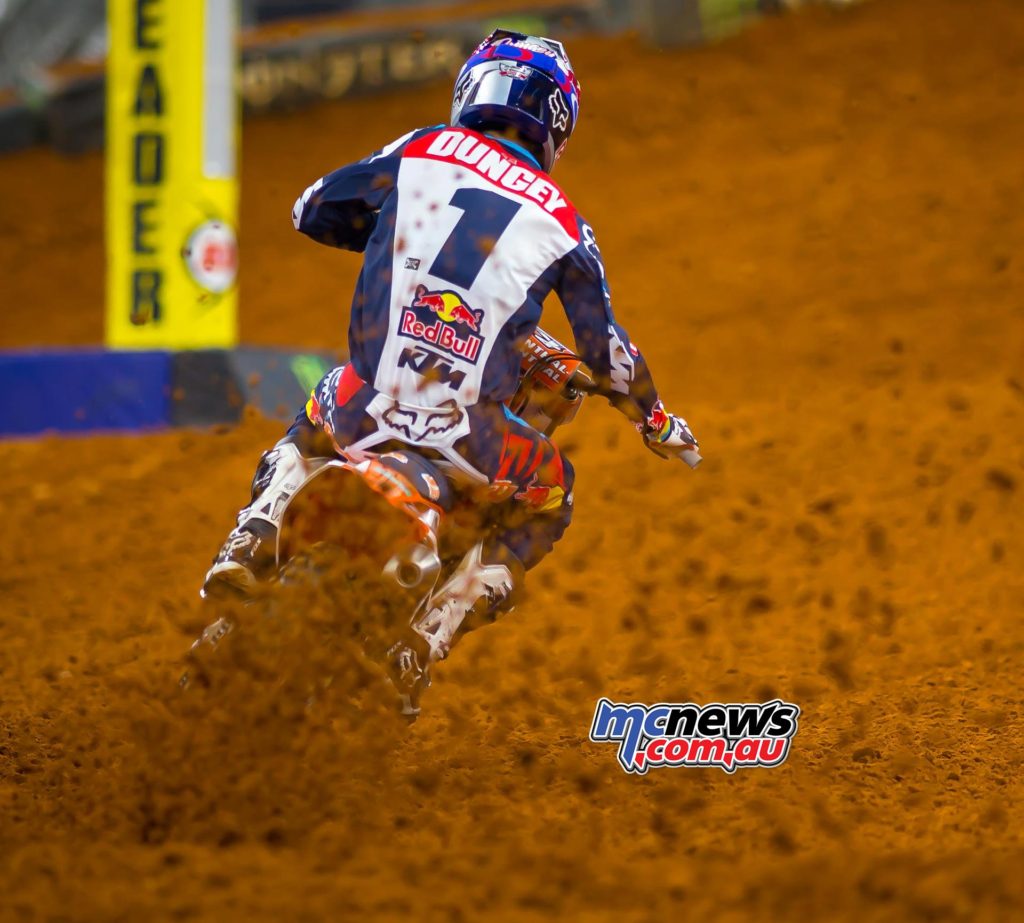 As Musquin rode effortlessly at the front, Webb began his attack by jumping his way past Bogle for second on Lap 1. On the ensuing lap Seely followed Webb past Bogle for third. Monster Energy Kawasaki’s Eli Tomac, who started seventh and entered the night with back-to-back wins, broke into the top five on Lap 2 and started to make a run on the lead group. Tomac was on fire as he clicked off blazing fast laps and inched onto the rear wheel of Bogle, making the pass for fourth on Lap 6.

Musquin had opened a comfortable lead over the field a quarter into the race, and on Lap 7 Webb slowed quickly after suffering a flat rear tire in his chase of the lead. He lost several positions before ultimately getting attention in the mechanics areas and falling out of contention. Webb’s misfortune allowed Seely to move into second, and a hard-charging Tomac into third. However, shortly after moving into podium position Tomac crashed on Lap 8 and dropped out of contention following damage suffered on his Kawasaki. The hard luck of his fellow competitors worked to the advantage of Rockstar Energy Husqvarna Factory Racing’s Jason Anderson who jumped into third, just ahead of his teammate Dean Wilson and Dungey, who valiantly fought his way into the top five after starting 13th. In just his second race for Rockstar Energy Husqvarna Factory Racing, Wilson fended off the attacks from Dungey for several laps, but the reigning two-time champion’s persistence paid off with a pass for fourth on Lap 20.

With no one to challenge him, Musquin rode steady the entire 26 laps and took the checkered flag by a margin of 5.3 seconds for his first premier class win. Seely equaled his season-best result in the runner-up spot, followed by Anderson with his first podium of the year. Dungey enjoyed an impressive comeback, but saw his current six-race podium stream come to an end finishing fourth.

Musquin becomes the 61st different 450SX Class winner in history and the Frenchman to claim victory since David Vuillemin this same weekend 15 years ago in 2002. He dedicated the win to his brother, Mika Musquin, who suffered career-ending injuries in a crash at the end of 2015 in Europe.

“I was super calm, trying to stay relaxed and not put any pressure on myself. I had a great start and worked on pacing myself and I was just doing my laps out there and it happened. The biggest thing was that I didn’t make any big mistakes and I stayed on my bike. Today I was more relaxed and I’m really happy.” 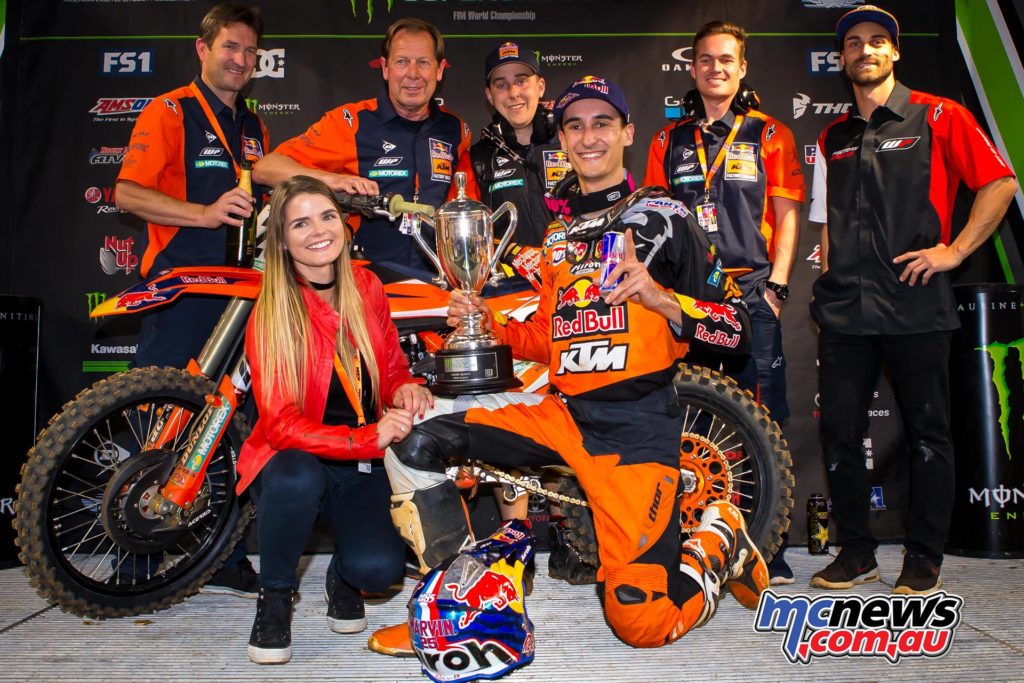 Despite finishing off of the podium, Dungey still managed to leave Texas with a larger advantage in the championship due to Tomac’s troubles. He now holds an 18-point lead over Musquin and sits 22-points ahead of Seely, who both surpassed Tomac, who finished 15th, in the standings.

“Overall it was a good night. Obviously our positioning wasn’t the best off the restart but I gave it my all to fight my way back up there. We caught a couple breaks to move into 4th and all-in-all we made up some ground in the big picture.” 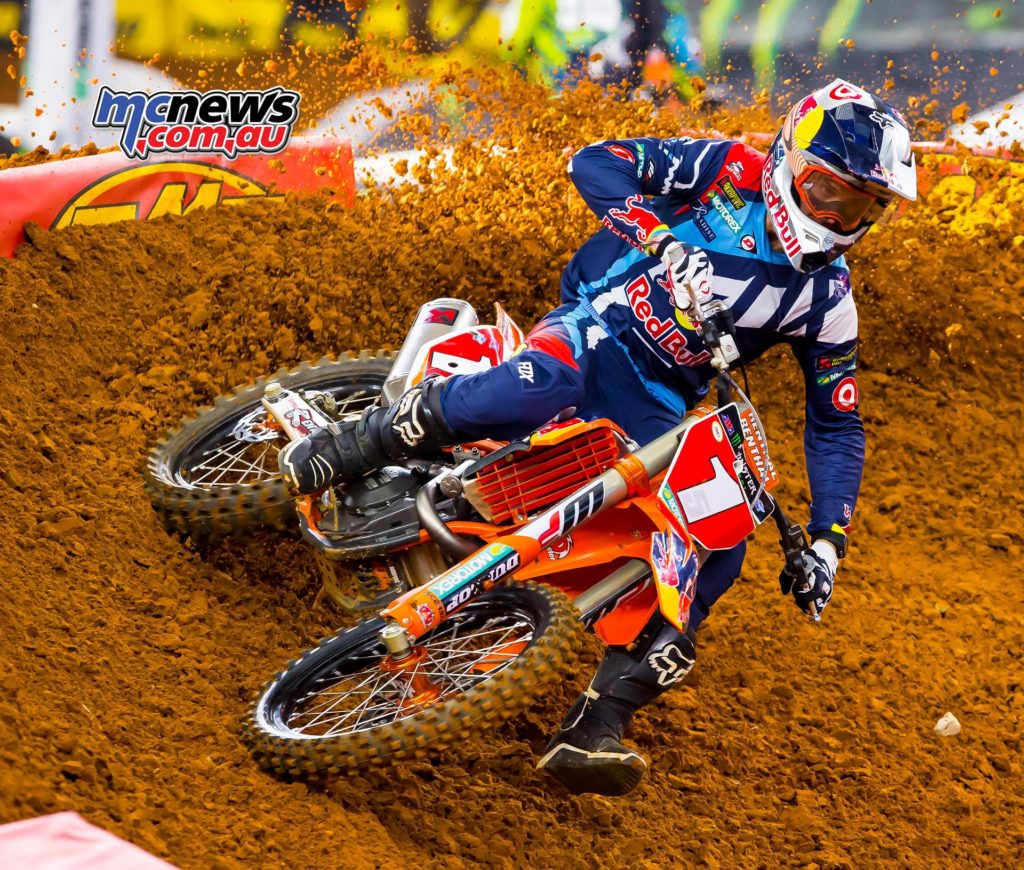 In the Western Regional 250SX Class Main Event, McElrath was quick out of the gate as he raced to his second SupercrossLive.com Holeshot Award of the season, with Monster Energy/Pro Circuit/Kawasaki teammates Justin Hill and Austin Forkner in tow. McElrath and Hill instantly set the pace at the front of the field while Forkner settled in behind them.

The battle for the lead was on immediately as the championship’s most consistent and successful duo of McElrath and Hill paced one another during the opening laps, establishing a small cushion over their fellow competitors. Rookie Forkner continued his pursuit just behind the duo, while GEICO Honda’s Jimmy Decotis was hot on his rear fender.

As McElrath encountered lapped traffic near the halfway point of the race, he meticulously found his way around without any difficulty, which allowed him to pull away from Hill. As he maintained that comfortable lead out front, disaster struck for McElrath on Lap 16 when his bike lost pace and caused him to lose positions, ultimately allowing Hill to take over the lead. McElrath would continue to drop back and eventually had to retire from the race. Forkner then moved into second, while Yamlube/Star Racing Yamaha’s Aaron Plessinger found his way into third after starting 12th.

Hill consistently laid down fast laps out front to grab his fourth consecutive victory and seventh win of his career by a margin of just over two seconds. He’s the first Monster Energy/Pro Circuit/Kawasaki rider to win four in a row since Christophe Pourcel did in 2010. Hill has now won more races this season alone than his entire career entering 2017.

“It was a tough break for Shane tonight. I hate to win like that but we never gave up all night,” said Hill. “This is the first time I’ve been in the championship fight this late in the season and I’m going to do all I can to bring it home. It’s great for the entire team to extend our lead heading into the break.”

Forkner earned a career-best finish in second, giving the Pro Circuit team its first 1-2 sweep since the season-ending East/West Regional Shootout in Las Vegas during the 2014 season, which was won by Hill. Plessinger enjoyed an incredible come-from-behind effort to finish third.

Hill’s lead in the Western Regional Championship extended to 21-points over Plessinger, whose third-place finish moved him into second. After a 22nd-place finish McElrath slid back to third and faces a 25-point deficit to the lead, one full race.

The 2017 Monster Energy Supercross season continues next Saturday, February 18, with the seventh round and its debut inside the new U.S. Bank Stadium in Minneapolis. It will mark the championship’s return to Minnesota for the first time since 2013.

Win a four-day ride in California with Husqvarna