By Trevor Hedge – Images by TBG

Qualifying for all classes got underway just after 0900 this morning at Hidden Valley as Australia’s fastest motorcycle racers continued tweaking their set-ups ahead of this weekend’s fourth round of the Australian Superbike Championship.  A few clouds were overhead in the Darwin sky, somewhat unusual for this time of year, by 0930 ambient temperature was alreayd nudging 30-degrees with humidity broaching 75 per cent.

The locals hit the track first for their initial qualifying session, the locals were out first for their ‘Motorsports NT Club Challenge’, this category is for local riders on mixed classes of machine that race together. However, there is a Queensland spoiler in the field to steal their glory, Matt Edwards on a Triumph 675 topping the initial Club Challenge qualifier ahead of local club racers Patrick Hamon and Warwick Price.

Next out was the combined Moto3 / 125GP qualifying session. This season some rounds have seen not a single 125cc machine in this category, but at Darwin eight of the flyweight two-stroke machines were taking to the tarmac. Most of the riders on the GP machines hailing from Western Australia. Where an unfortunate, and now long running, ‘apparent’ safety controversies with Wanneroo Raceway, saw the Motorcycle Racing Club of WA lose their initially scheduled round of the 2017 series, which was then replaced by the Darwin round we are at this weekend.

The fastest of the two-strokes was ridden by Taran Ocean, the Tasmanian lapping the Hidden Valley circuit in 79.15-seconds.  The 125cc lap record here is currently set at 75.195, record by Josh Hook way back in 2011.

The quickest machine around the track in the session was the Honda Moto3 machine ridden by Joel Kelso, a 74.68, well under the lap record for the category.

The eight 125cc machines add to the four Moto3 machines to produce a mixed class of only 12 machines.

Young Tommy Toparis showed that this round he was going to really take the fight up to Winton dominator Ted Collins. The Goulburn youngster breaking into the 68s, a 68.928 on the 10th of his 11 laps. Half-a-second under Daniel Falzon’s Supersport race lap record set in 2013, and three-tenths quicker than Aaron Morris’ 69.221 qualifying record set that same year.

Collins was second quickest, less than a tenth away from Toparis while Mark Chiodo equidistant behind in third place. Local hope Sam Lambert rounded out the top four ahead of Sam Muldoon and New Zealand’s Damon Rees. That top six covered by under half-a-second indicates we could be up for some sensational Supersport racing amongst the 22 competitors this weekend here in Darwin.

Oli Bayliss and Jack Mahaffy were the only young men to break into the 78s bracket during the 20-minute opening qualifying session for the exciting Supersport 300 class.  Bayliss, on a Kawasaki, and Mahaffy on a Yamaha.

Next best was Reid Battye, Tom Edwards and Tom Bramich while the leading KTM entry was Max Croker in sixth place after putting in a 69.950 on the fourth of his 14 laps during the session.

The Supersport 300 category boasts the most entrants this weekend at 33.

Herfoss straight down to business with a 66.93 on his first flying lap to lead the session early on. The Crankt Protein Honda squad still discovering the new electronic capabilities of the SP2, and in this session trying some new engine braking settings on the new machine. With the previous Fireblade SP campaigned by the squad the engine braking was all down to the dexterity of the digits on Troy’s left hand, this time around there are some computer smarts to learn the capabilities and limitations of. The team really are just scratching the surface somewhat with virtually no testing of the new machine ahead of this round. 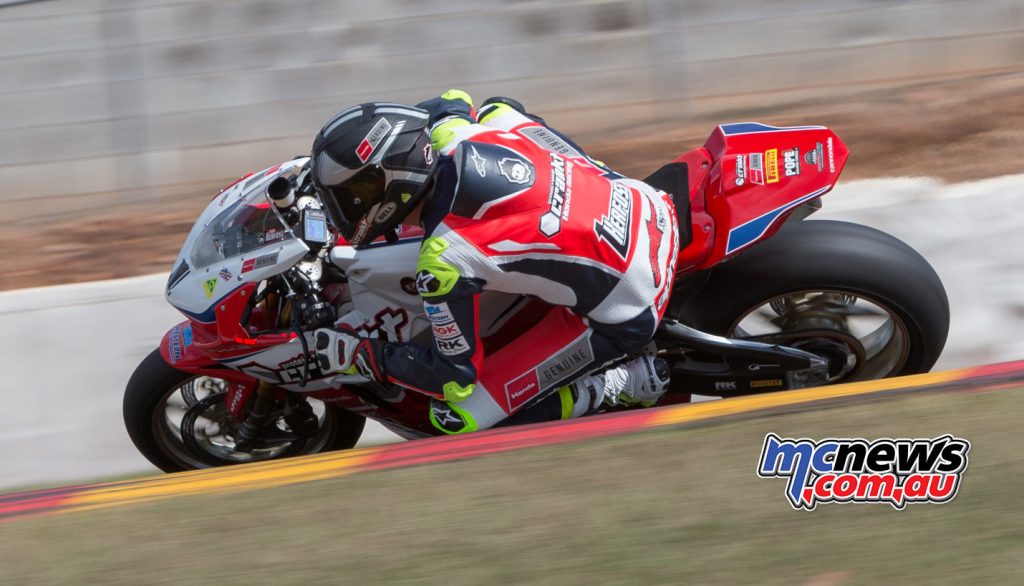 The changes must have borne fruit, and/or Troy got out of bed on the right side this morning, as on the next lap he lowered his time to a 66.47, half-a-second quicker than he managed during Friday’s three free practice sessions.

Then the Yamaha men started getting serious.

Daniel Falzon and Wayne Maxwell trading fastest laps, Falzon putting in a 66.19 on his fourth lap, and backing it up with similarly fast times over the next few laps.

At this halfway point of the session Maxwell was in second place on 66.26 ahead of that earlier 66.47 of Herfoss, while Staring ranked fourth on 66.91.  Corey Turner continued to look he could be a surprise packet this weekend, his 66.93 putting him ahead of Halliday, Bugden, Beaton and Walters.

Cru Halliday had not put many laps in during the first half of the session but quickly reinforced his presence in the second half of the session. The Camden rider, this year not under the official YRT Factory umbrella, but more like a satellite supported effort, started cracking out some good times, a 66.646 promoting him to fourth place on the timesheets.

Josh Waters then joined the fray, the Suzuki man late out of his pit garage, but then quickly down to business. The Mildura based two-time Australian Superbike Champion (2009 and 2012), clocking a 66.40 on his third lap to push Herfoss back to fourth. Waters had been keeping his powder dry, knowing he has good speed, but wanting to save front tyre wear. Not because the fronts are going to be a particular problem here this weekend, but for when he has a new rear in and has a crack at pole, he doesn’t want the tremendous grip of a brand new rear to then push the front.

Robbie Bugden was obviously using this session to gauge tyre wear. The Queenslander a wily campaigner, and winner of five New Zealand Superbike Championships, putting lap after lap down in the low 67s before cracking a 66.79 on the final of his 22 laps.

Glenn Allerton only put down seven laps in the session. A painful return for injury seeing him preserve himself of what will be brutal 17-lap encounters come Sunday.

When the timer ran out after the 30-minutes were complete it was Daniel Falzon topping the timesheets ahead of Wayne Maxwell and Josh Waters.

Troy Herfoss headed the provisional second row ahead of Cru Halliday and Bryan Staring while that late 66.79 promoted Bugden to seventh place on the charts.

Superbike Q2 is scheduled to commence at 1450, the final 30-minutes of track time the 24 Superbike competitors will get before a brief ten-minute warm-up session at 0940 tomorrow morning. Riders will grid up for the opening 17-lap bout at 1140. The second and final Superbike encounter is slated to commence at 1455.

Beaton 10th despite crashes at MXGP of Limburg