Josh Waters does the double – Bryan Staring breaks through

Josh Hook was rolled off the grid with bike problem just before the race got underway in a terrible disappointment after narrowly missing a podium in the opening bout.  That first race saw Josh Waters completely dominate from start to finish while the rest battled over the remaining podium positions.

It was Herfoss that took that second place in race one while Maxwell took third by a nose over Hook.  Teams made changes and tweaks to their machines in readiness for this second 14-lap bout which got underway at 1405 this afternoon at Sydney Motorsports Park.

Bryan Staring was the rider looking most likely to be able to take the challenge to Waters in that opener only for smoke to start hissing from the SP2 Fireblade, and the Western Australian was forced out with an oil leak.

With the offending gasket replaced Staring was out to make amends for that misfortune in this second 14-lap bout.

Only a few corners later the #47 Yamaha went down at turn three, and Maxwell hit the tyre wall quite hard. He was up and on his feet in short order, but he will be well beaten up from that impact. A terrible blow to the series leader and a massive shake-up in the championship chase. We said in our race one report that Waters was now firmly in the hunt for the #1 plate, and all of a sudden that rang doubly true…

Bryan Staring was doing his best to prevent Waters from breaking away, the gap was eight-tenths of a second with ten laps to run.

Four-seconds behind that leading duo was Glenn Allerton, Troy Herfoss and Daniel Falzon. The whole trio ran wide at turn nine and came oh so close to the whole triumvirate ending up on the deck and out of the race. Somehow, they all remained upright and Herfoss came out the other side with his nose in front of Falzon.  A lap later though that order changed again, Falzon moved up to third place with nine laps to run.

Josh Hook had actually managed to start the race and by this stage of the race was up to seventh place just behind Cru Halliday. However, the Ducati man had also scored himself a ten-second jump-start penalty!

As the race broached halfway distance Waters led Staring by more than two-seconds, but the #67 Honda still had a significant buffer from that tectonic battle over third place that was still totally hectic between Falzon, Allerton and Herfoss. Just behind that trio was Halliday and Hook.

That battle for third place showed no signs of relenting. There was fairings and leathers being rubbed between them with oh so much on the line as this championship looks to tighten up once again.

Each of the riders in that battle for third place displayed advantages at different points of the circuit, but over a whole lap nothing separated them and it was going to come down to who had the most rubber left on the final lap.

With five laps to run it started to look as though Allerton was holding Herfoss up a little. The defending champion pushed past the #14 Yamaha at turn seven in a clean move but by the end of the chute next time around it was Allerton again with his nose in front. Falzon had been demoted to seventh place by Halliday and Hook, as the battle for third really did become a five-way battle, that then became a seven-way battle as Corey Turner and Robbie Bugden joined the party!

Herfoss took third place from Allerton again with three laps to run. Corey Turner then ran wide and lost touch with that group. Daniel Falzon then slid out  after losing the front, reducing the number of combatants for that final step on the rostrum down to five… The South Australian managed to rejoin the race but eventually finished outside the points.

Throwing more excitement in to the mix was then lapped traffic! As they got the last lap board Herfoss was enjoying a reasonable buffer over his rivals for the first time. Up front Waters was controlling the race and still led by 1.2-seconds over Staring. The battle for third though was not over…

Josh Waters took victory to make it a double victory and along with pole position that made for a perfect 51-point haul to the Mildura man.

Bryan Staring bounced back from that race one mechanical DNF disappointment to secure that strong second place while his Crankt Protein Honda teammate rounded out the podium and took the championship lead.

“That one was much harder. Bryan was not giving up at all and made it hard for me there but we got there in the end. We are in the championship hunt good and proper now and it will all be on the line at Phillip Island early next month.”

“Big thanks to Crankt Protein Honda and the SP2 Fireblade. We have deserved this before but things just haven’t gone our way, but hopefully that is behind us and we can carry on this form towards more success at Phillip Island.”

“Really tough race, missed the jump to get away with the guys out in the front. When I got past Glenn I thought I might be able to catch them, but then I made a small mistake at turn nine, but I knew Glenn fights so hard, and I just didn’t have enough pace to break away from him. Once Wayne went down, and gee I hope he is alright as that was a fast crash and I hope he is okay, but once he was out I had to just concentrate on securing that third position, it all became about the points, and with Josh out in front too I knew it was going to tighten the championship even further. It had been a terrible weekend up until the race days, but that just shows how good my guys are that they managed to turn things around and make it possible for me to get up here on the podium this weekend, and not only that, but to also walk away from here with the championship lead.” 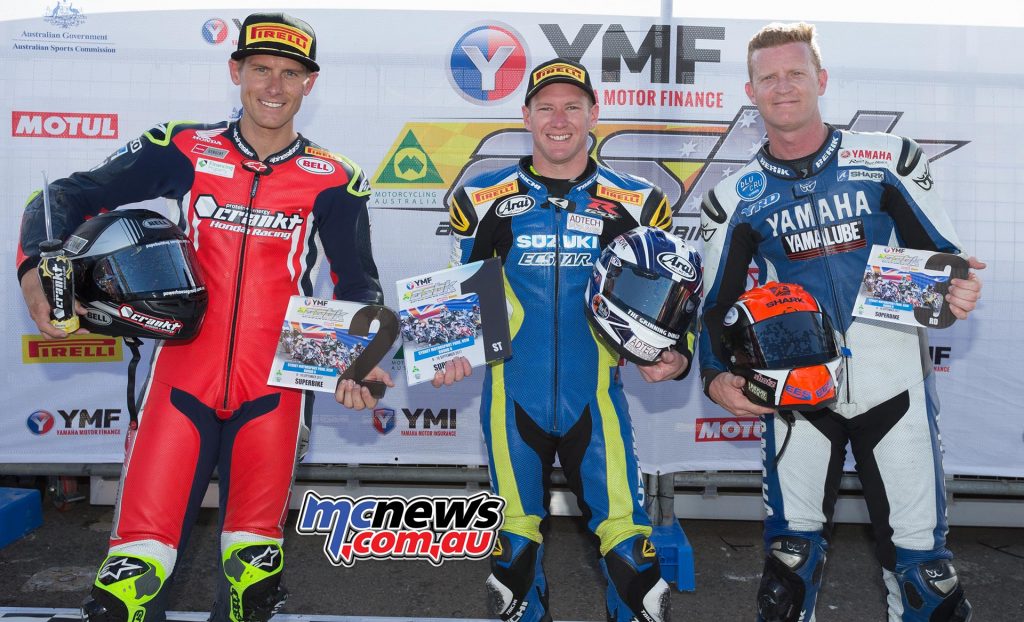 Troy Herfoss now leads the YMI Australian Superbike Championship by six-points but there are still 51-points up for grabs at the Phillip Island Championship finale over the weekend of October 6-8.

After a titanic battle it was Jack Mahaffy that emerged victorious over Billy Van Eerde and Tommy Edwards.

Broc Pearson just missed out on a podium result while Reid Battye was the first ‘Under 300cc’ home and with that result was crowned champion in that sub-category.

Billy Van Eerde the overall round winner with 66-points.

Tom Toparis was out to make up for that jump-start penalty in the opening stanza but did not make life easy for himself again in this one by getting a shocking start and was shuffled down to fifth place as the second 12-lap Motul Supersport race got underway under clear skies at 1320 this afternoon.

Race one victor Aaron Morris was straight down to battle with poleman Mark Chiodo but this time around Morris really had his hands full.

As the race progressed Mark Chiodo pulled away from his pursuers while Tom Toparis got the better of Morris to take second place.  Up front Chiodo continued to pull away, a best lap of 1m33.668, a single thousandth-of-a-second quicker than the lap record he set in the first bout.

As the race passed halfway distance Toparis and Morris had started to reel Chiodo in. Morris went up the inside but struggled to wash off speed as the forks started pattering across the Sydney Motorsports Park surface, Toparis then turned in and the two came together, both tumbling off into the grass. A disaster for that pair, particularly for Toparis who is fighting for second place in the championship with Mason Coote. Still, despite the disappointment there was some comraderie between them as they dusted themselves off.

The pressure was now off Chiodo. The Triumph rider had a five-second lead over Sam Muldoon and Mason Coote with two laps to run. Championship leader Ted Collins was running in fifth place, content to stay away from trouble in the hope of the lifting the Motul Australian Supersport Championship here today.

Mark Chiodo the race victor, the monkey off his back after a spate of recent crashes dented the young Victorian’s confidence.

NextGen Suzuki’s Ted Collins the 2017 Australian Supersport Champion. The only GSX-R600 rider in the field takes the main prize with a round still remaining after what was a virtually flawless 2017 campaign.

So much joy and emotion in parc ferme from both the race winner and the champion rendered many a moist eye amongst those present. 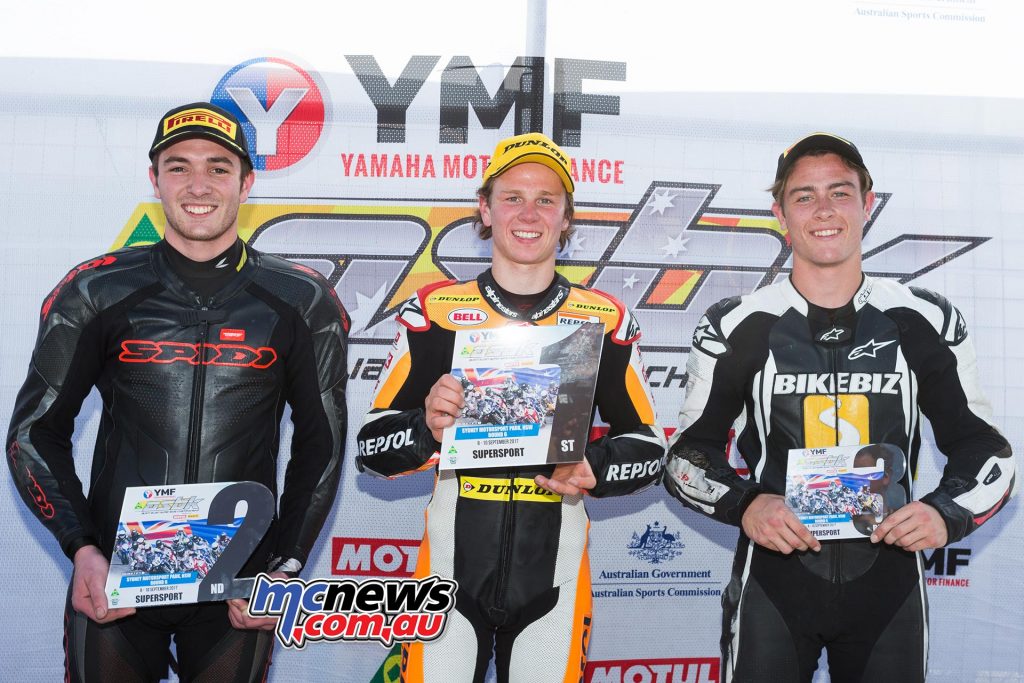 Tommy Edwards won the final R3 Cup encounter of the day but had to set a new lap record of 1m44.097 along the way to secure the victory over Jack Mahaffy and Hunter Ford.

Edwards also won the round with 70-points to Mahaffy’s 63 and Ford rounded out the overall podium with a 56-point haul.