With Mark Bracks
Images by TBG and Rob Mott

Mark Bracks gives MCNews.com.au the inside scoop on the Supersport 300, R3 Cup and Oceania Juniors Cup categories, following their appearances at the official ASBK test at Phillip Island last weekend.

Early signs at the test for the Supersport 300 and R3 Cup were that there hasn’t been too many departures from the ranks in 2019.

24 riders participated at the test, but by the time the race action happens in a few weeks the grids will swell to have nearly 40 riders vying for position.

Two that did leave are Tom Bramich who is off to compete in the Supersport 300 World Championship in Europe, while Oli Bayliss steps up to the Supersport 600 class. Apart from these two, the class will have a lot of the same players for the year racing with the same insane intensity that we have become accustomed to.

Honestly, no. It will probably be more intense and competitive, as each year the action rises to another level. Casting an eye over the entry list there is no doubt it will be a dynamite season.

This year also oversees the introduction of the Kawasaki Ninja 400 to the category, albeit with some limitations, primarily of which are the restrictions on suspension changes for the 400, compared to the more extensive hardware based suspension tuning allowed for the smaller capacity Yamaha YZF-R3, Ninja 300 and KTM 390.

Tom Bramich was at the test but was not included in the official times as he was testing a Ninja 400 that he will use in the Supersport 300 World Championship in Europe this year. The bike he will race for Carl Cox Motorsports is allowed a lot more extras than what is allowed in the corresponding category here, so Tom was out getting accustomed to a Kawasaki and the extras that come with it.

The ever improving Seth Crump was fastest over the two days, but again, testing times mean little as every one of them are contantly improving their riding skill. His usual combatants were there in attendance including 2018 GP Juniors Cup Champion Max Stauffer, Locky Taylor and Harry Khouri.

One interesting note is that BCPerformance Kawasaki have drafted in one of Australia’s fastest lady racers in Tayla Relph, who joins the team alongside West Australian Callum O’Brien. Relph is one of the most determined and gutsy competitors you’ll find and has deepened her intensity and determination since joining the ranks of the 300s after a number of years racing a Moto3 machine.

O’Brien, another one of the graduates of the GP Juniors meanwhile is a very quiet unassuming young kid who knows what he wants and goes about the task with a minimum of fuss but a truckload of determination. Watch him come of age as a rider under the tutelage of the BCPerformance Team.

As for Tayla now that she has a professional team environment around her, she may well take that little extra step to be a regular on the podium.

Adding spice to this already ultra-competitive line-up will be Senna Agius and Ben Baker, who both competed in the Asia Talent Cup last year. Their seasons were compromised by injury but both will gleefully jump into this cauldron of young talent and no doubt put to use their experiences of the competition with the best youngsters of Asia last year.

The weekend also saw the debut of the Oceania Juniors Cup for the young tackers. All on Yamaha YZF-R15s, the series is a step forward from the GP Juniors Cup with Motorcycling Australia taking over the running, and already it has shown great promise with over 25 riders turning up for the turn-key competition series.

It harps back to the very early days of production racing where a rider (or families in this case) pay an amount for the year which includes bike, riding gear, bike transport and all the rest, with the bikes being transported by MA and Yamaha.

It’s going to be hard to recognise the young racers as all bikes and leathers are identical so it will be subtle markings like numbers – that normally are hard to decipher at the distance, as well as helmet design that will identify them to the masses of onlookers that will witness their antics during the year.

Keep an eye out for names like Glenn Nelson, Angus Grenfell, Max Gibbons, Cros Francis, Reece Oughtred, Marianos Nikolis, Tom Drane, Zak Pettendy and Jamie Port. All will no doubt become part of an ever growing list of, ‘Names for the Future’. 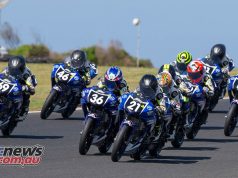