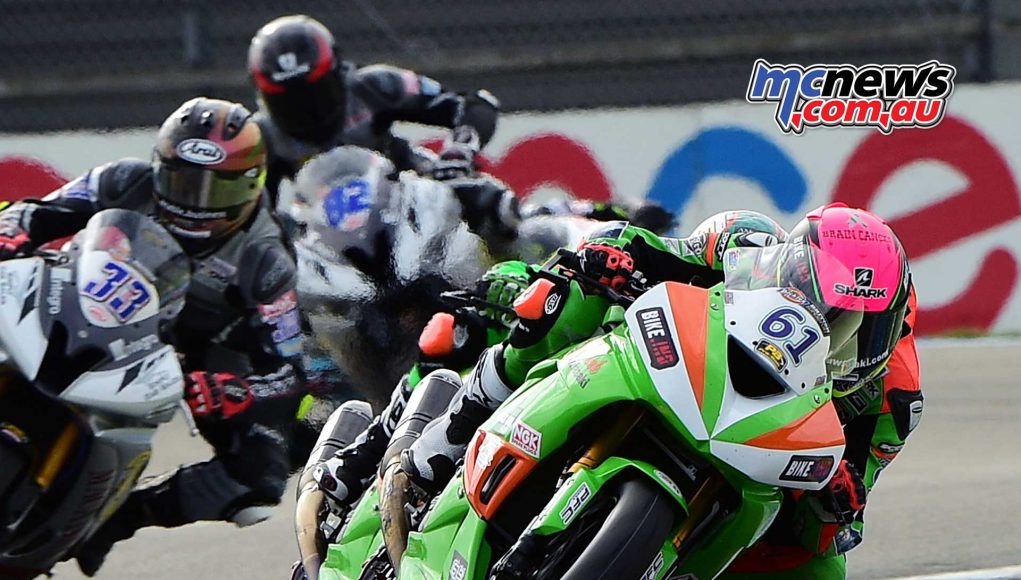 Launching off the line, Currie controlled the race from the front, pulling away to eventually cross the line 5.778s ahead of second place.

It was disaster for Championship leader Keith Farmer though as he crashed out of contention on the opening lap, with title rival Andrew Irwin securing second place behind his team mate Currie.

It was Gearlink Kawasaki’s Andrew Irwin who grabbed the holeshot, but race one winner Benjamin Currie had moved through by the end of the opening lap, with Keith Farmer third and Jack Kennedy fourth.

Trading places on every lap, disaster first struck Kennedy when he was forced to retire on lap ten from a potential podium place.

Lapping faster than the leaders, Lahti was able to chip away at their lead to close in, moving into the lead on the penultimate lap.

Continuing to trade places, the leading four were separated by just 0.2s as they entered the last lap but a collision between Farmer and Currie saw the latter crash out of contention. Following a review, Race Direction gave Farmer a 60-second time penalty, seeing him drop out of the points.

“I was absolutely delighted to gain my third win on Saturday, once again in the wet conditions. I was on a high and really looking forward to the race on Sunday. It was dry and I wanted to win in both conditions at Assen. I felt really comfortable and we were all having a really good battle with each other, swapping positions and racing hard. I’d managed to get to the front going into the final lap and was focused on what I had to do, then on the last lap I had a coming together with Keith and that was the end of that! I had good pace all weekend and the Gearlink Kawasaki team as always worked so hard to give me that opportunity to be running up at the front. It wasn’t meant to be but I can’t thank the team and my personal sponsors enough. I am still third in the Championship standings as we move on to the final round at Brands Hatch, I’ll be fighting for wins there and finish off a great first season with Gearlink!

I can’t wait for Brands!”

2017 Ducati Performance TriOptions Cup Champion Joe Collier rounded out the season with victory in the final race at Assen.

Whilst it was Josh Wainwright who led across the line at the end of the first lap, Collier slipped through one lap later and was able to pull away to take the win by 3.646s.

Levi Day was able to work through the pack to claim second place whilst Wainwright was able to out drag Phil Atkinson to claim the final rostrum position by just 0.045s.

“Today went pretty well! 2nd in the race, fastest lap of the race and this weekends results took me from 6th to 3rd overall in the final Ducati Tri Options championship standings!
It’s been a mega year with a great bunch of people supporting me. My team and my sponsors have made all of this possible and I’m under no illusion that none of this is possible without the commitment and sacrifices many others put in to help me achieve any of this.”