The sunlight in Salta on the Dakar’s day-off is somewhat deceiving given the rotten meteorological conditions that have blighted the first week. Heavy storms and torrential rain severely hampered the race organiser’s plans, who had hoped for a more trouble-free first week without the inclement weather, which led to cancellations and changes. As far as everything else went, it was business as usual in a week of full-tilt special stages, fairly painless navigation and headache-inducing Bolivian altitudes putting a damper on rider performances. Bad weather forced cancellation of the opening stage and also disrupted Saturday’s stage as the El Niño effect continues to register its presence. Storms, heavy rain and local flooding brought Saturday’s timed special to a premature halt at the 300km mark of the planned 353km.

Team HRC come away from the first week in good standing with their riders well-placed in the overall standings, especially Portuguese Paulo Gonçalves, who lies in first place overall. Gonçalves has so far clinched one stage victory, a runner-up position and two third-place finishes before Saturday’s arrival in Salta. Paulo will be looking to maintain the kind of consistency and effort that have earned him the current top-spot, as the second week assault gets underway tomorrow, with the final race destination in Rosario, Argentina next weekend.

Other leading lights for Honda include Kevin Benavides who is currently fifth overall.

“We are at the rest day in Salta halfway through this Dakar Rally 2016. First of all I wanted to apologise to Joan Barreda for what happened (engine problems) in Uyuni. On the other hand I want to highlight the great work that the team is doing, especially Paulo who is leading the rankings. Also, for Kevin Benavides who has put in some fine performances with Honda South America Rally Team, who the team is supporting.

“Today we are preparing the bikes for the second part of the Dakar. So far the condition of the bikes and the riders has been fine. The other four bikes haven’t given any problems and we will continue with the programmed maintenance plan as we will for the Honda South American Rally Team. The plan is to arrive in Rosario with the same engine.”

“Clearly the feelings are two-fold: positive, because we are leading the race with Paulo Goncalves and because all the other team riders are doing a great job; negative because we had the technical problem with Barreda. The guy has been really unlucky in Bolivia, above all in the very same stage last year. For the rest, the feeling is positive and the team is working well together and we have overcome a really hard week, not because the routes were so difficult but for the meteorological conditions that we have been faced with and the altitude that has influenced a lot.

“Team HRC is ready to tackle the second week of the Dakar, even if we are really missing Joan Barreda here to help us with our mission to help keep Paulo’s overall leadership. We have probably the three strongest and hardest days ahead of us. We are now arriving in the desert in the brutal hot sands of Fiambala, which also includes another marathon stage where the riders are in a different part of the bivouac without any assistance or mechanical help from the team. So, the next three days will be really interesting and after that we’ve got three more days before we arrive back in Rosario close to Buenos Aires.”

Joan Barreda’s Dakar 2016 participation came to an end following an accident in stage six, when the Spaniard took a heavy blow to the left hand. Barreda was being towed back to the bivouac by team-mate Paolo Ceci, after a breakdown earlier in the day, when the crash and subsequent injury occured, ruling him out of a stage seven start.

Excellent participation by Honda South America Rally Team’s Kevin Benavides on the Argentinean’s maiden Dakar. The rider, who hails from Salta, marked a new milestone in Argentinean motorcycling history by winning the third stage. His performances have allowed him to hold sixth place overall as the race reaches its halfway stage.

While Toby Price and the emerging Antoine Meo have produced highlights for KTM, it was a big blow to lose the services of the talented young Austrian Walkner, who was in the running for a top finish in this year’s edition. Walkner, the 2015 FIM World Cross-Countries Rally champion, was in third overall after the sixth stage but crashed just 17km from the start and sustained a broken femur, ending his bid for this year’s title.

At the end of the first half of the rally Toby Price is in second overall behind Paolo Goncalves of Portugal, but is only three-minutes twelve-seconds behind. Price has also won four of the seven stages thus far, the most of any competitor.

“I’m happy with my performance. You must never drop your guard. It’s the best way to make mistakes. I’m happy with the work we’ve done so far. It’s far from over, a mechanical or a navigational mistake can destroy everything. My aim is to finish the race and get a podium spot. We had a good first week, no significant mistakes. Our objective was to get to the rest day in a good position.”

Currently third outright is Slovenian Stefan Svitko, only six-minutes adrift of second placed Price and surpassing the expectations of many.

World Enduro legend Antoine Meo is starting to enjoy his maiden Dakar after winning the seventh stage of the competition and lies sixth outright.

“I’m discovering the Dakar,” he said. “It’s still hard to judge. I wanted to be in the top 10 and, so far, it’s even better. I try to be consistent and not to get too tired.”

“The past week of the Dakar had ups and downs. A lot of ups with stage wins from Toby (Price) and another from Antoine (Meo), and with the performance of our other riders. The downs of course are the riders that are not racing any more.

“Unfortunately Matthias (Walkner) stopped when he was in a very good position and his crash was very disappointing for all of us. It’s a bad moment when someone gets injured. Matthias put in a lot of effort to succeed in this race, even though we know this is part of the game. I believe he will come back stronger than he left the Dakar 2016, and we all wish him all the best. The surgery went well. Some 22 hours after the operation he will be able to fly home.

“We work day by day. Of course we focus on our advance thinking but something can happen every day. Our main goal is that our riders have to look after their energy levels and of course that they can look after the bikes so they stay together.”

Quintanilla the leading light for Husqvarna

Rockstar Energy Husqvarna’s Pablo Quintanilla wrapped up his first week of the 2016 Dakar Rally with a promising fifth place in stage seven and is now overall fourth at the halfway point. Quintanilla was one of the riders who stopped to offer assistance to KTM’s Matthias Walkner after he crashed at the 15km mark and who had his final time adjusted accordingly.

“At the start of the special I came across Matthias [Walkner], who’d just fallen. I stayed with him until the helicopter came. It’s tough to ease back into your pace after that, he’s like a friend to me… The special was varied, with fast parts and mountainous sectors.’”

“My week was quite difficult because it was hard to find my rhythm on the mountainous terrain of the start to the rally. However, the priority was getting to the rest day without any mishaps, without any injuries and in the top 10. We did it, so I’m happy in this sense. Now is time to catch a breather before a tough second week with lots of navigation. It’s a new phase. We know we can win or lose big time. We’ll have to keep a cool head, focus on the road book and read it properly.”

Sadly injuries in the previous stages to teammates Ruben Faria and Pela Renet have left Quintanilla as the only member of the factory trio. Faria briefly rejoined the team in Salta on the rest day before flying home to Portugal.

Spanish Husqvarna rider Txomin Arana continues to impress and closes out his first week in 11th overall in this competitive field.

“It was a difficult week with two crashes with Pela (Renet) and Ruben (Faria) but both are well and will recover soon. Of course it’s a big disappointment, especially with Ruben who was performing really well in the last stages, and who had the opportunity to be in the top five in Rosario. We are really happy with Quintanilla. He has performed well and we hope he can keep his level of riding in stages 8,9 and 10. Then we’ll see who has stayed on top and who will drop down. I hope Quintanilla will have 2-3 good days when he can attack and that he can be on the podium in Rosario.”

Yamaha riders looking to progress up the leaderboard

The seventh stage of the Dakar Rally was crucial for Yamaha’s riders, Hélder Rodrigues ended the stage in fifth place and holds down seventh overall.  Rodrigues had to wait to get over the flu to fully express his talent on the Dakar Rally aboard his WR450F Rally

“I kept the tempo up and stayed with the frontrunners today. I rode fast and the WR450F Rally handled well until the finish. I’m happy to end this week in better physical shape, with no major problem or issue with the bike and in a good overall position. I need to attack stronger during the second week to conclude this Dakar well for me and the whole Yamaha team.”

“We had a long stage before a restorative rest day in Salta, that all the riders and the team deserve. It’s a pity that the special was shortened as the riders had a good tempo and were making progress in the second section; the truncated stage affected the results, but that’s the rule for a race under these circumstances. It is also a source of satisfaction for Yamaha to have the four riders in good shape after one week of tough racing.

“We will prepare for the next stages in the best way possible. The second week will be way different from the past one: we’re expecting different characteristics, with sand and dunes, favourable for those riders that are good in navigation. We should keep focused so as not to make any mistakes and conclude this Dakar well next week.”

Riders and teams on Sunday serviced bikes and equipment, took stock of the first stage and made plans and formulated tactics for the second stage. Many riders are expecting the rally to be much more difficult and more tactical in the second half as they head back to the finish in Rosario on January 16. 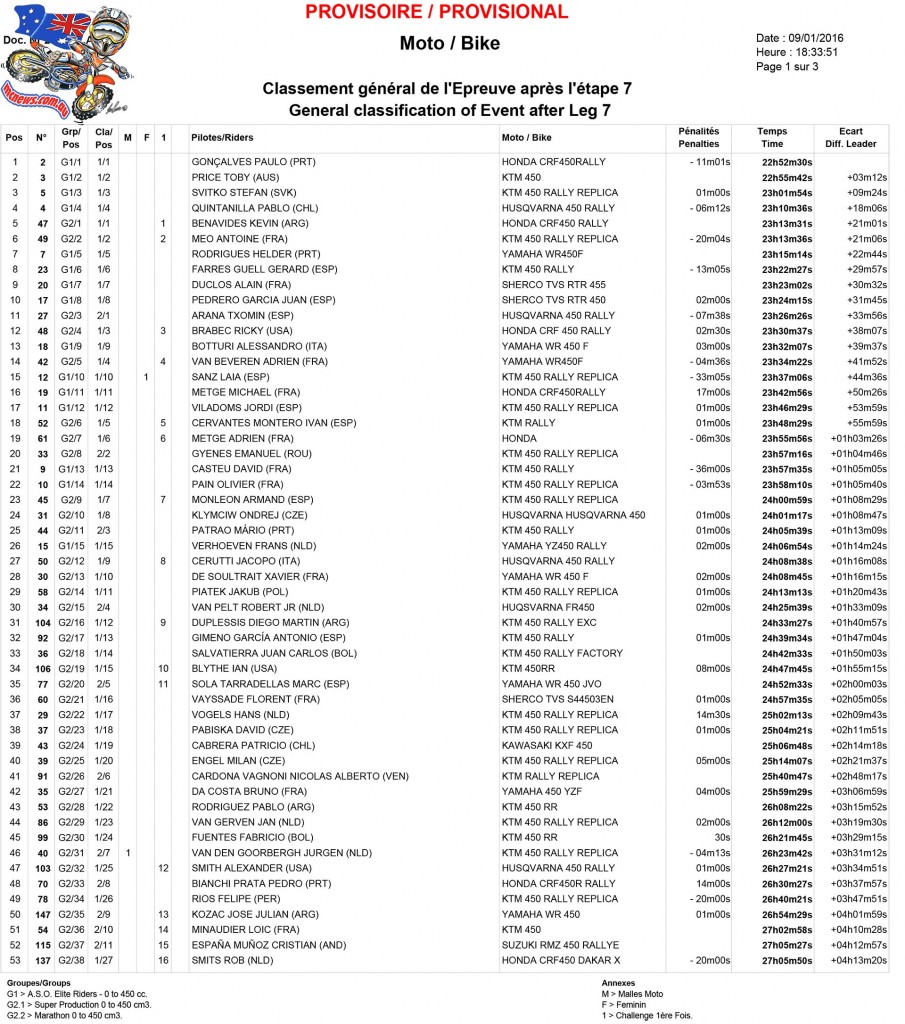 The change of terrain which marks the entry into the second part of the rally should also mark a change in programme for the drivers, who will face the first dune sections of the 2016 edition. Experts in dunes crossing will have an opportunity to demonstrate their skills and even gain an advantage. They will also notice the navigational difficulties which have been introduced this year to complicate their existence.