Australian Daniel Stauffer gave New Zealand’s best motorcycle racers a quick riding lesson during the final round of the Suzuki Tri-Series at the Cemetery Circuit on Boxing Day.

Stauffer was fastest qualifier and remained unbeaten in all three F1 Superbike races at Wanganui, which included victory in the prestigious Robert Holden Memorial feature race. A title he won on debut in 2010.

Super hot conditions and an ultra-hot pace translated into a new lap record of 49.081 seconds for the Bernard Racing Yamaha R1 rider, who rode superbly on a near standard ex Tony Rees Motorcycles machine running original but modified suspension. Andrew Stroud threatened early in each race however Stauffer had the measure of his trans-Tasman counterpart, and Hamilton’s Nick Cole who was second in two of the days three big races.

Stauffer didn’t compete in the previous two rounds. “I had a great time so I’m pretty pumped! I gelled with the track but mainly it’s the Brian Bernard Yamaha team and Kerry Dukic prepared a fantastic motorcycle. The bike was fantastic, we haven’t changed much at all – the same as last year, a standard bike with a set of cams. It is not the fastest bike out there but you’re only first, second and third gear here so you don’t need a top-notch fast bike, the standard torque is enough,” Stauffer says.

Taking his second victory in the Robert Holden Memorial wasn’t lost on the Australian. “It was great to see Robert’s mum hand out the trophy again this year, which was really nice. I know it has special significance for her and the family. It’s really nice to see the joy on their faces every time – that is really special because you don’t get that anywhere in Australia!”

With the first two F1 Superbike rounds counting towards the Suzuki Tri-Series Hamilton’s Andrew Stroud didn’t need to win to earn an impressive fourth title, yet still picked up third and second placings in the two Tri-Series points scoring races. He capped another successful Suzuki Tri-Series with third position in the Robert Holden Memorial for his David Reid Homes Suzuki team in front of a near capacity crowd.

The 43 year old admitted he struggled this year around the Cemetery Circuit at breakneck speeds. “I was always going to do the best I could but today it didn’t feel like it all gelled. I was even pushing it a bit harder than I was comfortable with. It was good to come away with my fourth Suzuki Tri-Series in a row, but still every race is a race for me! It was a good challenge trying to hang in there with Dan (Stauffer), and in the second race I was pushing it hard to stay with him till maybe the second to last lap when I made a mistake when a lapped rider was in the way,” Stroud explains.

“I always ride to try and win and be competitive. You can’t use all the horsepower around here – I’m only using three quarter throttle at the end of the straight.”

Stroud tried especially hard in the Robert Holden Memorial after firming up his suspension to prevent front-end dive and wheelying, but the changes knocked his confidence in the bumpy turns. “I was having a few hairy moments which I don’t usually have!”

Manfeild race winner Nick Cole was the only other rider to scorch around the 1.4km street circuit under the 50 second barrier on his Kawasaki ZX-10R, and snatched second from Stroud in two of the day’s three F1 Superbike legs. Cole finished second in the title standings for his Red Devil Racing team. Ray Clee came close to winning both races at Manfeild on his RCM Suzuki GSXR1000 and placed fifth and fourth in the two title races for third in the series.

During an incident-filled day Glen Skachill (Wellington) and Dennis Charlett (Christchurch) shared a win apiece in the F2 600 Supers category. The duo were never more than a few metres apart all day, with Skachill’s three series wins earning the 21 year old his second Suzuki Tri-Series F2 600 Supers title in as many years, ahead of Charlett.
Aucklander Karl Morgan completed the podium on each occasion for third in the title chase – all rode Suzuki GSXR600 machines.

Skachill says, “In the last race I was chasing Dennis pretty hard but I didn’t quite have the measure of him as I had a spin coming out of turn two which woke me up and I thought, ‘Just finish the race and secure the championship.’ Perhaps if there wasn’t a title at stake I might have tried a bit harder, but I’m happy with the result!”

But it was a different story for Williams in the Post Classic category. He remained unbeaten in all six races on his Bimota YB8 1000 to win his class ahead of Steve Bridge (Ngaruawahia) and Sean Donnelly (Paraparaumu). Bridge and Eamon Timms (Lower Hutt) were second and third in each leg.

Wanganui hot-shots Richard Dibben (Honda) and Glenn Hayden (Honda) rode impressively to win a race each of the 450 Moto class against eventual series winner Toby Summers (Auckland), who crossed the line third in race one on his Yamaha YZF450 behind Dibben and Jaden Carrick (Wanganui, Suzuki) and second in race two behind Hayden. Dibben lead the final 450 Moto race until he ran wide at turn one, allowing Haden through for the win. Carrick finished third in the race, and third in the series, behind Hayden.

450 Moto series winner, through consistency, Summers said, “Today was good, a second and a third and I still managed to hold a good points lead. Winning the Tri-Series was the priority, so I’m pretty happy.”

Sidecars are always a crowd favourite at Wanganui and this year was no exception. Wanganui locals Adam Unsworth/Stu Dawe posted a pair of good wins to score six firsts from as many starts to win the Suzuki Tri-Series title. The Chris Lawrance/Steve Bron partnership was second in both heats with Des James and Warren Miller third, for second in the title chase.

A pair of wins secured the BEARS title for Katikati rider Rhys Holmes on his well presented BMW S1000RR. Jamie Galway of Masterton was second in the championship, ahead of Duncan Coutts (Whangarei). 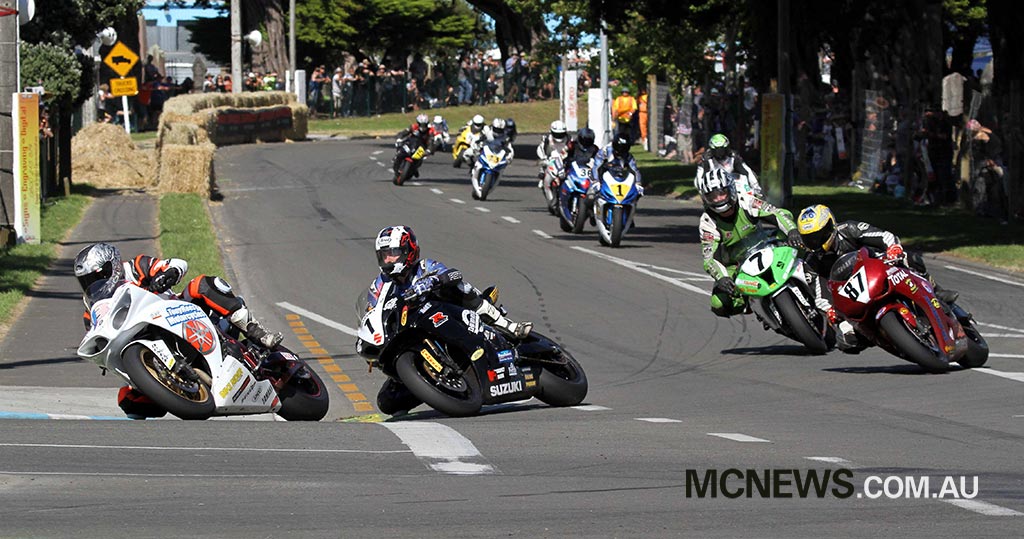 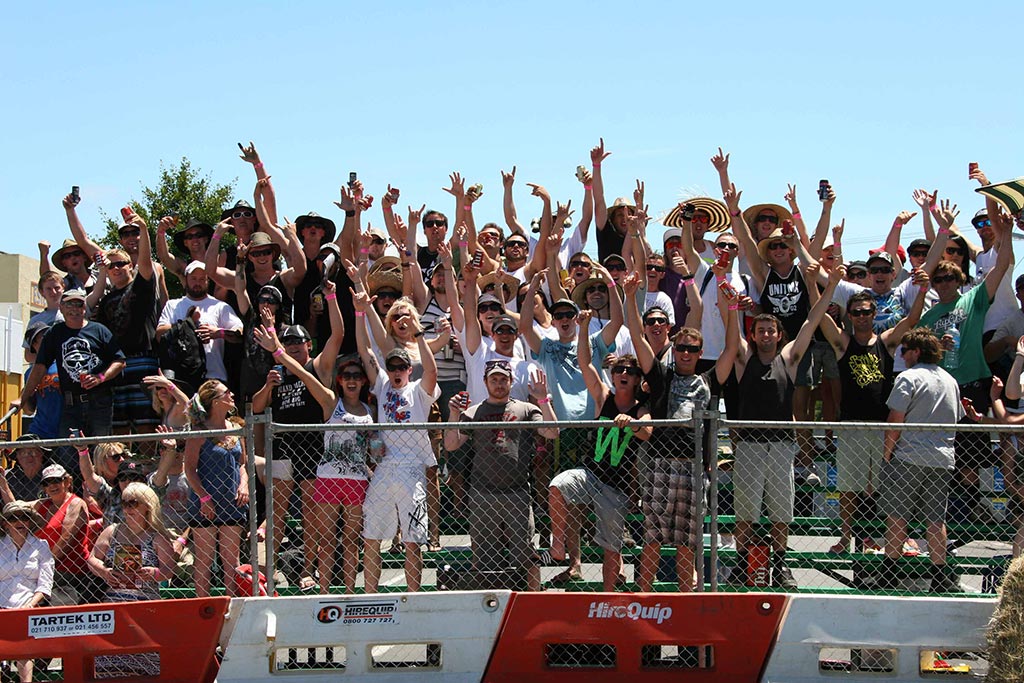 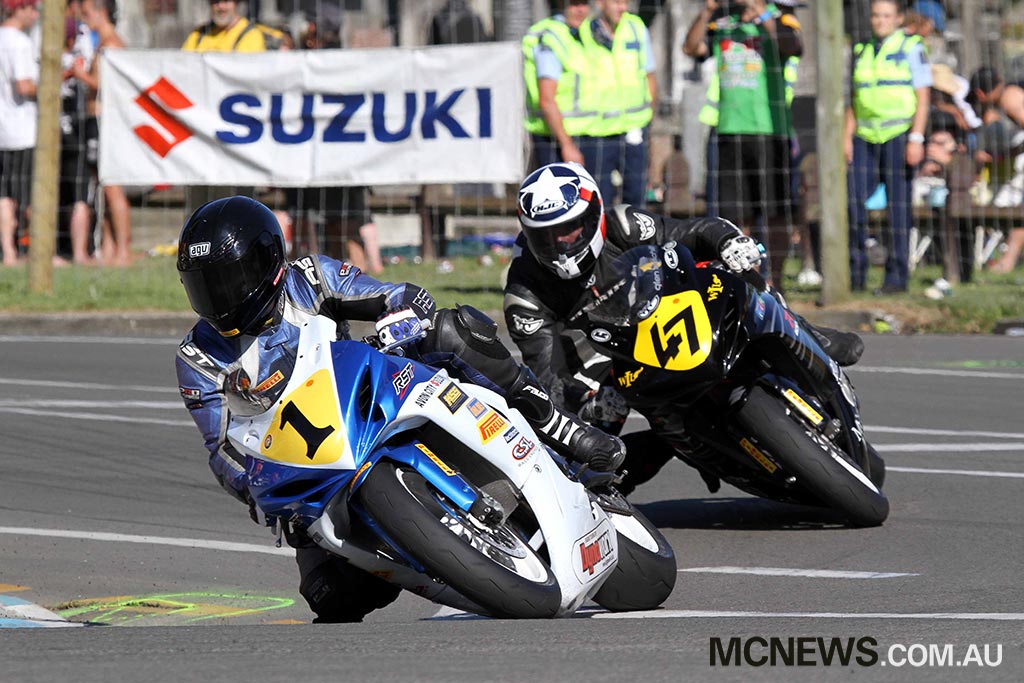