Death on day one mars Dakar as Aprilia take the lead

38-year-old Argentine competitor Jorge Martinez Boero fell from his Beta in the special section of the first stage from Mar del Plata and Santa Rosa and sustained a heart attack after the crash. Medical assistance was rendered within five minutes via a medical helicopter but doctors were unable to resuscitate Boero. An unfortunate start to Dakar with the 21st death of a competitor in event history, while 59 people in total have died during the event’s 29-year history, including more than 20 spectators.

While the timed stage, supported by thousands of Argentinean fans was more festive than challenging, riders were very much aware that this was a mere crumb in the torturous journey that takes them for the first time from the coast of the Atlantic to the coast of the Pacific to finish in the Peruvian capital Lima after nearly 9000 km.

Dakar title-holder and KTM factory rider Marc Coma was in the best of form, finishing the special in second place just 14 seconds behind Chaleco Lopez of Chile. Cyril Despres, mainstay of the KTM Factory Team and like Coma, a three-times Dakar winner, took it easy in the warm-up and was 1:48 behind the leader in 13th place ahead of the long liaison into the interior of the country.

Clearly in a confident spirit, Coma said after the brief dash of the timed special: “The first special was breathtaking: next to the seaside and with beautiful little dunes. It really was a fantastic warm-up. But we still have a long day ahead of us, with a lengthy liaison.” Despres was also happy to be back on the bike and communing with his road book. “I took this special quite cautiously because there were a lot of potholes, fesh-fesh, dust… and spectators, so I kept it cool at the beginning!”

The so-called ‘water carriers’, the riders whose job it is to support the two key factory riders also had a solid start. KTM’s Rubin Faria of Portugal, the support rider for Cyril Despres had a good opening session finishing 1:18 behind the leader in eighth place while Joan Pedrero, Marc Coma’s support rider was 2:24 behind in 18th place.

KTM Enduro factory rider Johnny Aubert of France is making his first Dakar appearance riding the KTM 450 Rally bike and supported by the KTM Customer Service. With a mission to ‘learn and enjoy the Dakar experience’, Johnny finished 20th just 2:29 behind the leader. Felipe Zanol of Brazil, who finished a close second to Cyril Despres in this year’s Dos Sertoes Rally in Brazil was 26th and trails the leader by 3:15 minutes. New Zealander Chris Birch, who races in Extreme events for KTM, such as the Red Bull Romaniacs and the notorious Red Bull Hare Scramble at Erzberg, Austria is also tackling his first Dakar and was 5:51 behind the leader in 39th place. Moh Balooshi, KTM’s UAE rider and the first Arab to contest the bike category, ended the day trailing by 16 minutes 20 seconds and must now settle down to some steady riding to make up the deficit.

With less than three minutes separating the first 20 riders it is clear that they get down to serious business in Stage Two. They leave Santa Rosa to tackle 300 km of timed special that starts on firm terrain and ends in dangerously tricky soft sand. As they get closer to their destination at San Rafael they will encounter the grey volcanic sand that slows down their bikes and requires absolute concentration and physical effort from the riders.

The MRW rider finishes the first stage only 14 seconds behind the winner —2 minutes, 10 seconds ahead of his team mate, Joan Pedrero— in a day marked by the death of Argentinean Martínez Boero.
It is underway. After a year of races, tests and waiting, the Dakar started again today. A stage of more than 800 kilometres, 57 of them timed, where Marc Coma put himself forward for victory, finishing in second position, only 14 seconds behind ‘Chaleco’ López, winner of this first stage. The MRW rider needed 32 minutes and 51 seconds, 2 minutes and 10 seconds less than his team mate Joan Pedrero, who finished 18th the day the rally showed his worst face, with the death of an Argentinean rider.

To welcome 2012, the participants left today Mar del Plata towards Santa Rosa de la Pampa, with a first stage in the coast. Surrounded by the beautiful Argentinean landscape, Coma and Pedrero found the first dune to start warming up and having the first impressions of the race. A
picture that contrasts with the worst news of this race, the crash of Argentinean Jorge Martínez Boero, who died when he was being moved by helicopter to the hospital.

Tomorrow the riders will leave to San Rafael, in a new stage of nearly 800 kilometres, with a link of 486km and 295 timed kilometres and a very fast first half before finding again the typical Dakar dunes.

Avoiding unnecessary risks and finding one´s feet in the race – that has been the motto for the Husqvarna Rallye Team by Speedbrain in the opening stage of the Dakar 2012. The first special test proved to be fast, dusty and littered with holes. Because of the sometimes dangerous conditions it was important to ride cautiously.

The time differences after 57 km were small. Joan Barreda headed the five-man team, placing sixth on the day.
The 28-year-old Spaniard came from 23th position early on. Teammate Paulo Goncalves rode defensively.
“I wanted to avoid any risk and rather warm myself up for the following days,” the Portuguese said. This smart approach was also taken by Zé Hélio, Ike Klaumann and Jose Manuel Pellicer, who all completed the inaugural stage not far behind the leaders.

Tomorrow marks the first real endurance test. The riders have to cover a distance of almost 800 km. The special stage alone offers 295 km. The course is expected to be fast at first, then leading through the dunes of El Nihuil and a spectacular volcano area. 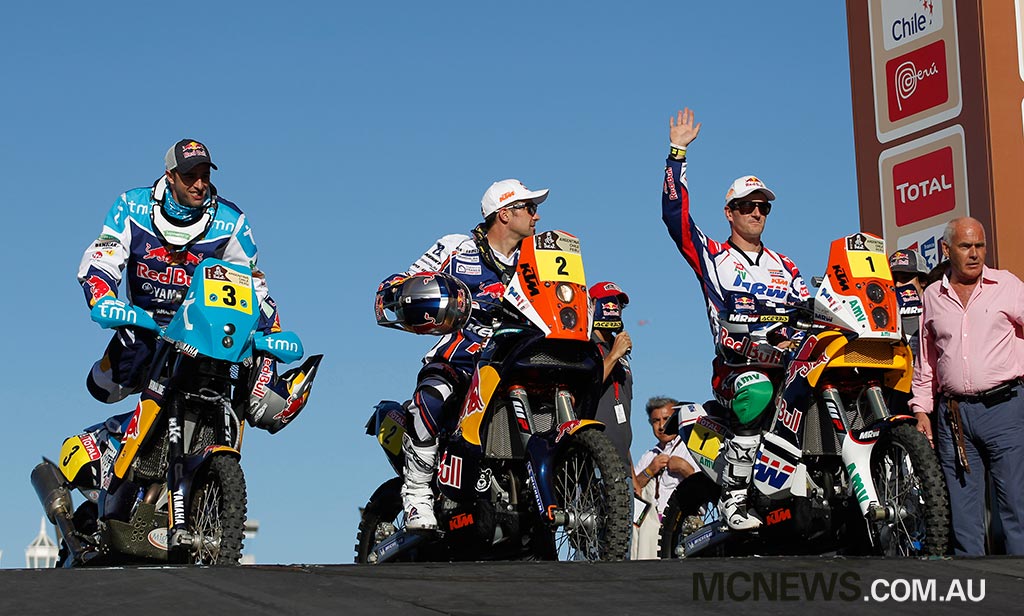