The two-day MotoAmerica Dunlop Preseason Test got started today at the Circuit of The Americas (COTA) with eight 50-minute sessions spread out over the Superbike and Supersport classes and it ended with some familiar names on top of the timesheets.

In the Motul Superbike class it was last year’s COTA winner Toni Elias leading the way on his brand-new Suzuki GSX-R1000, the Spaniard besting teammate Roger Hayden by .556 in the final session with Hayden’s best coming in the second of four sessions. The two factory Yamahas were next with Monster Energy/Graves Yamaha’s Cameron Beaubier third fastest and just ahead of his teammate Josh Hayes.

Elias lapped at a best of 2:09.547 in the fourth and final session on Tuesday afternoon, just off his best from last year’s Dunlop Preseason test. Beaubier, however, led last year’s test with a 2:08.764 on a qualifying tire and Hayden earned pole position for last April’s race with a 2:09.151, also with a qualifying tire.

Even though he ended up on top, Elias isn’t completely happy with the front-end feel of his new GSX-R. The Moto2 World Champion and MotoGP race winner also had a crash early in the day.

“It has been a tough and difficult day,” Elias said. “I don’t feel comfortable yet, but it has been a perfect lap because I didn’t make any mistakes, the lines… everything was perfect. Some days you feel much better, for example at the Thunderhill test I felt much better and thought I would be half a second faster but I make mistake a lot. Today, I don’t feel comfortable but I had the perfect lap. The team worked hard and we improved, but I’m still missing some front information. With brakes, without brakes, it’s the same feeling and we need to work on that.”

Hayden, meanwhile, was fairly pleased with his day.

“The day went pretty good,” Hayden said. “We got to go through a lot of stuff. It was nice to get a dry day in and get to learn more about the bike. We tried out a lot of things. Some were positive, some weren’t, but we were pretty fast all day and that’s good. We’re always looking for a little more, but we were always toward the front every session and the bike, for me, is getting more comfortable. I’m looking forward to another good day tomorrow.”

The Superstock 1000 class was led on the first of two days of testing by last year’s doubleheader winner Bobby Fong on the Latus Motors Racing Kawasaki ZX-10R. Fong turned in a 2:11.887 – 1.542 of a second slower than his qualifying time from last year’s race.

Garrett Gerloff was the fastest Supersport rider of the day aboard his Monster Energy/Yamalube/Y.E.S./Graves Yamaha.

Like Elias, Gerloff also had a crash, though it was no fault of his own. The defending MotoAmerica Supersport Champion was following Moto3 test rider Gabriel Martinez-Abrego when the KTM-mounted Mexican crashed and took Gerloff with him.

“Today wasn’t too bad,” Gerloff said. “It didn’t start off the best. I had a little incident with another rider and gave my team a little bit of work to do. After that, we put our heads down and worked our way up slowly into the groove. We got into a flow and me and my bike were working together better. It took a little bit of time, but we’re getting pretty close. We have a good setting right now. There are still a few things I’d really like to improve tomorrow that are going to be a big help for the race in a month’s time. I’m excited for tomorrow and I think it’s going to be another good day.”

Gerloff led M4 ECSTAR Suzuki’s Valentin Debise by .402 of a second with his teammate JD Beach third and .764 of a second off his pace. KTM RC Cup Champion Brandon Paasch made his Supersport debut a good one, setting the fourth fastest time despite a crash in the third of four sessions. Ridikulous Racing’s Daytona Anderson rounded out the top five on day one. 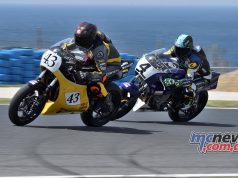 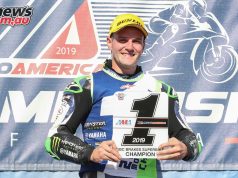 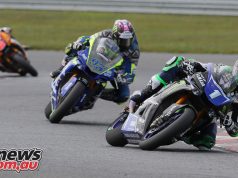 Beaubier closes in on Elias at New Jersey MotoAmerica