The latest motorcycle rider from down under to make his mark in the cauldron of European competition, Melbourne’s Jed Metcher, has a point to prove in this weekend’s inaugural Phillip Island 8 Hour Australian Endurance Championship.

Scott showed some serious hustle at Phillip Island two weeks ago when he won the final round of the Australian Supersport Championship, while Cudlin emerged victorious in the Superstock class of the 2010 Endurance World Championship.

“When I heard who my teammates were going to be this weekend I freaked out a little bit,” said Metcher. “It’s certainly put a lot more pressure on me to perform, especially as I normally ride a Yamaha in Europe.

“But that’s what makes endurance racing such an exciting discipline, and I’m certainly out to prove a point that I can be competitive on any bike.”

Metcher competed in the famed Bol’dor 24-hour world endurance racing in France last year, which he describes “as an amazing experience”.

“The commitment that goes into endurance racing is amazing – they can change front and rear tyres and dump 24 litres of fuel in 15 seconds,” continued Metcher. “And they are so fun to ride in too, because it’s not just about yourself – you have to gel as a team.

“That’s what we are looking at doing this weekend and, who knows, anything could happen. We could even find ourselves challenging for outright honours if we maintain focus and keep it all together.”

Metcher’s WNR Kawasaki team is managed by someone who knows a thing or two about the complexities of endurance racing – two-time world champion Warwick Nowland.

A late entry for the eight-hour is 2010 Australian Superbike champion Bryan Staring, who will join Ben Henry and Nicholas Waters on a Cube Racing Suzuki GSX-R1000.

“Both Ben Henry and Nick Waters are great riders and I look forward to the challenge,” said Staring, who arrives back from Europe, Thursday night, the eve of the island’s eight hour. “It should be a fantastic race to watch so I want to encourage as many race fans as possible to get down to Phillip Island and make a weekend of it. This could become a round of the World Endurance Championship in years to come.”

Another GSX-R1000, belonging to the factory Suzuki team in Australia, will start the eight-hour as red-hot favourite, thanks to the talents of regular riders Josh Waters, Troy Herfoss and Robbie Budgen. Waters teamed with Shawn Giles to finish third in the 2010 six-hour at Phillip Island.

And Team Suzuki isn’t lacking for flair on its Supersport entry either, with incumbent Brodie Waters – who was just pipped to this year’s Aussie title by Yamaha veteran Kevin Curtain – to be joined on the GSX-R600 by lightning fast duo Ben Attard and Mitchell Carr.

Twenty-five teams will start, which will begin at 9:30am with one of endurance racing’s enduring staples – the Le Mans start. All teams have a minimum of three riders, and final qualifying for the top teams features a cut-throat 20-minute Saturday afternoon session.

Once the riders set off, the eight hours that follow will inevitably produce tales of hardship and triumph – and not all of it confined to on-track.

That’s because pit stops are critical in endurance racing, and one botched effort can spell disaster for a team – just as well-drilled performances can make a huge difference.

Fuel strategies and tyre management are also key issues that teams have to grapple with.

It’s that wonderful unpredictability which makes endurance racing such an electrifying spectacle, and why 160,000 people have been known to line the Suzuka circuit in Japan for its annual eight-hour showpiece.

At Phillip Island, if all goes to plan, teams will pit around every 45 minutes, and the fastest bikes are expected to grind out 286 laps of the 4.448km Bass Straight circuit – weather permitting. That’s around 1272km.

Outside of the teams laden with the sport’s biggest names, one of the most intriguing entries is that that of former AFL star Jason Akermanis, who will launch his first serious bike racing effort campaigning a Honda CBR600RR in the Superstock class.

Akermanis, 34, has assembled a team of five riders for the enduro – backed by the Caulfield Park Community School, which caters for students who struggle to fit into the conventional teaching system.

“To be honest, this will be my first serious bike race,” said the 2001 Brownlow Medallist. “But I have been riding for years, and have done lots of ride days at the island. My best time round there is a 1.48 on a Supersport 600 and, while I will have a go, I sometimes come unstuck.”

Meanwhile, GSX-R1000-riding Japanese quartet Mikiya Kimuri, Yuji Okabayashi, Osamu Arai and Kei Tanaka will add an international flavour to the event, while KTM, BMW and Triumph will uphold honour for the European manufacturers against the might of Japan Inc.

The Australian 8 Hour Endurance Championship will be packaged into a two-hour television program, which will be broadcast on motorsport channel SPEED.

General admission prices will be $45 for a three-day pass, or $25 for entry on Sunday only. 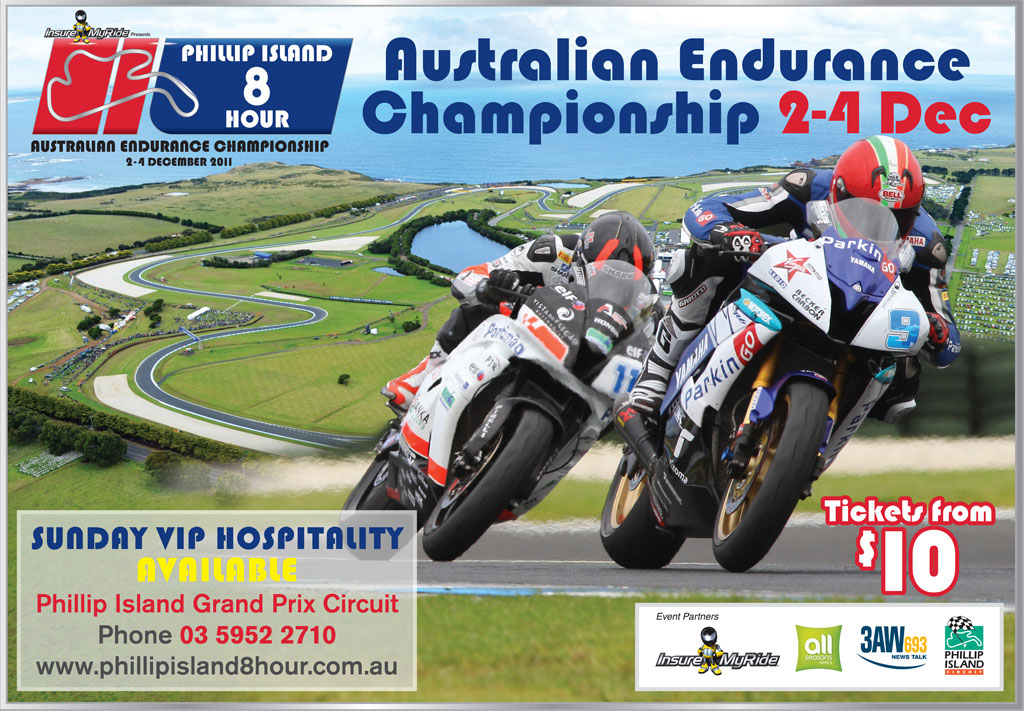