Exciting news from the Australian F1 and F2 Sidecar Championship in 2020, with the series being expanded to five rounds, with the inclusion of The Bend Motorsport Park, in South Australia, after the new track proved a hit with ASBK and ARRC.

The Australian F1 and F2 Sidecar Championship will also return to Barbagallo Raceway, Western Australia after a three-year hiatus, alongside Kings of Wanneroo.

With continued support from Horsell and Pagid Brakepads, the 2020 season is shaping up to be hard fought battle in both F1 and F2 sidecar categories, with Motorcycling Australia Road Race Events Manager, Liz Galazkiewicz, saying the 2020 Championship expansion would provide spectators with an even better show.

“We are very excited to have the Australian F1 and F2 Sidecar Championship appearing for the first time at The Bend Motorsport Park as well as returning to Western Australia’s Barbagallo Raceway. We know both the Bend Motorsport Park and Bar­­bagallo Raceway will attract strong fields and good crowds to witness these fearless men and women of the Sidecar Championship. MA would like to extend our thanks to Motorcycle Sportsmen of QLD (Masters of Morgan Park), Pheonix Club (Adelade 3 Hour), and Motor Cycle Racing Club of WA (Kings of Wanneroo) for inviting the Championship to join their existing events. Thank you to Jeff Brown for reaching out to the clubs and creating the relationship for the Championship to run alongside their events. Having the opportunity to attend three of the biggest club promoted events in the country is an honour and really demonstrates the spectacle that Sidecar racing is and helps create a diverse Championship. There is strong commitment from teams for the expanded competition and we are proud to again have the support of Horsell and Pagid Brakepads for the Australian F1 and F2 Sidecar Championship.”

The 2019 Championship saw young gun brothers Corey and Danyon Turner crowned F1 Sidecar Champions ahead of WA’s Jero Joyce and Corey Blackman in second and former Champions Howard Ford and Lee Menzies third, and no doubt the battle for the 2020 title will be just as intense.

Two rounds of the Championship will run alongside the Australian Superbike Championship, while one will join the Masters of Morgan Park.

Wayne Maxwell dominates day one of ASBK Testing at P.I. 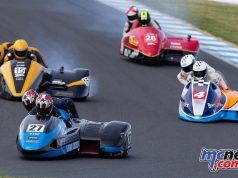 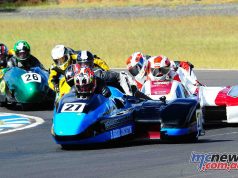