It was a win it or bin it weekend for the Yamaha Racing with Ipone team as they contested round three of the FX Superbike Championships at a chilly Wakefield Park, Goulburn NSW.

Crashes throughout the weekend for Kevin Curtain kept him from performing at his best while Rick Olson spent the day battling through the pack in a mad dash towards the front. 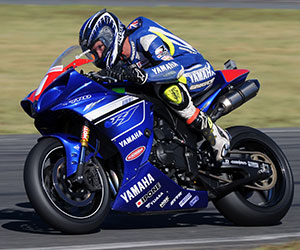 Rick Olson was able to overcome a day of bad starts to bounce back and take the win the FX600cc class. Olson won all three races comfortably and stretched his lead in the championship.

He backed that up with a solid performance on the more powerful FX 1000cc Superbike class with a second place finish for the round. In a model of consistency, Olson took three second place finishes to claim second spot on the podium and keep him in the championship hunt in third place.

“It was a weird weekend with a lot of guys with a few riders crashing while I wasn’t able to get a decent start all day. Fortunately, I was able to rebound well and I managed a pretty good weekend. I will take the 1-2 finish for the day and hold down 1-3 in the championships so far, so things are going alright,” Olson said.

Team mate Kevin Curtain experienced a rare tough day at the office with a couple of falls halting his momentum. The weekend didn’t start off well for Curtain with a heavy fall on his Formula Oz machine after hit it some coolant on the track. Still, he battled on bravely and managed to pull down third in the FX Superbike class while another fall on his Formula Oz bike meant he rounded out the day in seventh.

Despite the tough day, Curtain still maintains the championship lead in both classes after dominating the early rounds. 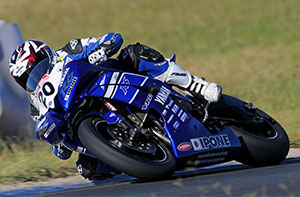 “I’m feeling pretty second hand at the moment as I had two big offs, one of Friday and another today (Sunday). I don’t seem to crash often but when I do it is always pretty big,” Curtain smirks.

“At least the two positives are that I kept the points lead in both classes and there is a bit of a break in the calendar until the next round and gives me some time to heal up before hitting the track again.”

Team manager, John Redding, also took the positives as he reflected on a rare off weekend for his team. “The weekend proved to be a tough one for the team but all things consider we were able to keep the points lead in the championship and the riders will be fighting fit for the next round. It also made the team work double time over the course of the weekend as they continue to repair and prepare bikes for each and every race.”

“Everyone on the team pulled together and got the job done and it was pleasing to see the team work in the YRT crew,” Redding ends.

For more information on the FX Superbike Championship, http://www.formula-xtreme.com.au.

Parkes, in just his third ride on the Factory Yamaha team since returning to Australia, put in an outstanding effort to take the round victory with 1-3-1 results in the three races contested.

It wasn’t all smooth sailing for the Yamaha racer who had to overcome some teething issues and reacquaint himself with a circuit that he hadn’t ridden on for a long time.

“We made a few changes to the bike throughout the weekend and things improved, so it was good to get the round win. I feel like I have improved at each round as I have adjusted to the bikes and the race circuits and I’m in pretty good shape in the championship with a few rounds still to go,” Parkes offers.

Parkes lead home a podium full of Yamaha riders in the FX Superbike class as he spent the day battling with Rick Olson and Kevin Curtain in a very tight group that provided great racing.

Parkes’ team mate, Cru Halliday had his own issues to deal with as a fall on the Friday practice session saw him nursing a very sore ankle. Still, Halliday knuckled down to the job at hand and peeled of an ultra-consistent 2-2-2 finishes in the FX600cc to land in second place behind fellow Yamaha rider, Rick Olson.

“The weekend didn’t start off so good and the crash certainly took a bit out of me, but the team did a great job on getting my bike sorted and I was able to get through the races and finish in second. I’m still second in the championship and with a little break in the racing now I can get back to full health and have a real crack at the final few rounds,” he said.

Round four of the FX Superbike Championship takes place at Queensland Raceway on August 23-25.

For more information on the series; www.formula-xtreme.com.au or for a complete list of results; www.computime.com.au

2011 Pro Thunder Champion Angus Reekie’s adventurous decision to take on the factory-backed fours of the FX Superbike championship on a near showroom KTMRC8R 1190 took a dark turn at round three of the series at Wakefield Park yesterday.

It may be considered one of the most distinctive and sexy bikes in the paddock, but against the factory fours the KTMRC8R Racing Team V-twin gives away up to 30 horsepower on every straight and only its scalpel-like agility and confidence-inspiring braking – as well as Reekie’s ample steering talent – makes up the difference. At Wakefield however the challenge reached a critical mass.

“I’d really hoped Wakefield would be great for us because it is a tighter circuit,” said Reekie, “and with the lap times I was doing on my own I started to think fifth or sixth was possible. But once in the pack I couldn’t do a thing, I was getting held up and baulked in every corner, then outgunned once we got out, and I let it get to me.”

For the six-time Aussie supermoto champion, not seeing himself as a potential race winner is something that can only be achieved with conscious effort, and Reekie began to over-ride in an effort to address his own high expectations.

“I’d qualified eighth, slipped to 12th off the start, then fought my way back up to 8th twice after having a couple of moments along the way. There was a big group of six of us, and fortunately the bike is a demon under brakes and the corner speed is unbelievable. I’ve got GoPro footage of me just about kissing tyres with other riders in every corner where we’re that just much faster. At the end though, we nearly got taken out by another guy who aggressively hit me, then bounced off and hit Craig McMartin. We were lucky no-one went down and I just thought, okay, let’s just bring it home.”

Reekie took tenth in the first race, which despite being only one place lower than his PB in the FX series, disappointed the 26-year-old. But worse was to come.

“I knew I was pushing right to the limit which was starting to worry me because I just didn’t have the feeling today. Then in Race Two on the third lap I had a huge high-side that flicked me out of the saddle in the fast corner.”

Hanging off the side of the bike, Reekie had to use every ounce of skill and determination to wrestle it to a stop, but having lost the pack and taken a big hit to his confidence, he decided to withdraw from the event.

“It was a really lucky save because that would have been a fast place to crash, but by the time I stopped there was no point continuing. I could run top ten all day on this bike, but it’s just doing it a disservice because it’s got so much more potential.

“I feel really terrible because I’ve never given up on anything before and I know my confidence is still lacking since my injury, which played a big part today, but like people keep saying to me, if you’re not feeling it, it’s best to put it away. There’s just not enough room for error.

“This race is one I’d like to forget, but we’ve got two months to make some changes in several key areas, and we’ll come out swinging.”