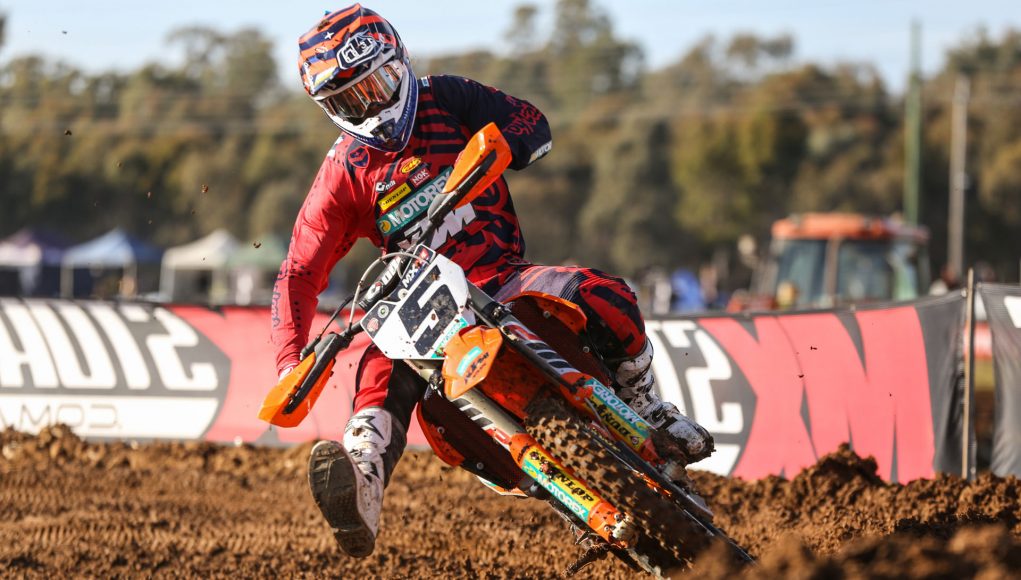 Dean Ferris retains the championship lead with a 54-point lead

KTM Motocross Racing Team’s Kirk Gibbs has ended the six-round winning streak of Thor MX1 Championship leader Dean Ferris, while collecting his first round win of 2017, at Round 7 of the Motul MX Nationals at Shepparton in Victoria.

It was a break through weekend for Gibbs aboard his KTM machine, contending with one of the most technically challenging tracks of the season and his toughest opponent Ferris, but at the conclusion of racing it Gibbs who left the Victorian venue victorious this afternoon.

The Thor MX1 class had their first opportunity to sample the Shepparton soil during practice and qualifying this morning, and within only a handful of laps it was CDR Yamaha’s Ferris who was fastest on track. However, with vital points up for grabs at Round 7, mid-way through the session KTM Racing Team’s Gibbs shot to the top of the time sheets with a 1:32.799 lap time, where he stayed for the remainder of the session.

When race one got underway for the Thor MX1 class at Shepparton, DPH Motorsport’s Kade Mosig shot off the concrete start and secured the Raceline holeshot, followed by Gibbs, Ferris and MEGA Bulk Fuels Monster Energy Kawasaki’s Brett Metcalfe.

After only four minutes, Mosig began to put distance between himself and his closest competitors Gibbs and Ferris – meanwhile behind the top three, experienced Metcalfe and Crankt Protein Honda Racing’s rookie Clout began to battle for fourth.

But it was the battle for the lead the captured the crowd’s attention at the five lap mark. Gibbs closed in on Mosig, but in what has been the trend of the season, Ferris followed suit and it was line choice this morning that made all the difference.

Ferris pushed hard and made the pass on Gibbs to find Mosig’s rear wheel, but a small mistake in a rut saw the MX1 championship leader go down, and when he re-joined the race, Ferris was back in 12th position for the first time this season.

With Ferris outside the top ten, Mosig capitalised, and both himself and Gibbs checked out on the field. Behind the top two Metcalfe and Clout continued to battle for the final podium position, while American Kyle Peters completed the top five after seven laps on track.

Incredibly, the technical Shepparton circuit claimed another victim only two laps later, with Clout sliding out of a rut taking his Honda machine down and handing fourth place to Wilson Coolair Motul Factory Suzuki’s Peters.

The excitement then continued at the front of the field with Gibbs closing in on Mosig, and within only a few turns, the former MX1 champ made the move in to the race lead, and relegated Mosig to second.

By the halfway mark, Gibbs continued to hold the top spot from Mosig and Metcalfe, while Peters and Waters completed the top five. Rookie pair Crawford and Clout occupied positions six and seven, KTM Motocross Racing Team’s Luke Styke had found his way in to eighth, and Ferris had made his way from 12th up to ninth position.

As moto one for the Thor MX1 class reached the 16 lap mark, Ferris continued to charge through the field in a bid to maximise points, making his way up to eighth position with a handful of laps remaining.

But the man of the moment was Gibbs in race one, who’s composure and calculated riding saw him lead by a comfortable 2.5 second margin as the moto reached it’s closing stages.

And when the chequered flag flew it was Gibbs who secured his third race win of the season in the opening Thor MX1 moto. Second place went to Mosig who managed to fight off Metcalfe throughout the entire final lap, forcing the veteran Kawasaki rider to settle for third.

Fourth went to Peters, while Waters finished in fifth. Crawford wrapped up race one in sixth ahead of CDR Yamaha’s Ferris who charged back to seventh. Styke, Clout, and Joel Green completed the top ten.

After recording his worst result of the season in race one at Shepparton, when the second moto got started for the Thor MX1 class, Ferris was out for redemption.

When gates dropped it was Mosig who took his second holeshot for the day, but within only a lap, Ferris had gone from eighth to the race lead, proving to the crowd that he was determined to bounce back from his race one result.

For the Thor MX1 riders, moto two dished out some of the toughest conditions of the day, with ruts getting deeper and harder, catching out the most talented of the field, but after two laps, Ferris had pulled his classic ‘breathing’ room on the rest of the talented pack, while Mosig continued to maintain second place ahead of Waters and Metcalfe.

Unfortunately for Mosig, the Shepparton surface caught him out only four laps in, the DPH Motorsport rider going down and losing a position to Crankt Protein Honda Racing’s Waters.

With a third of the moto completed, Ferris continued to lead by a comfortable margin from Waters and Mosig, while behind the top three Metcalfe began to close in on the Honda and Yamaha rider’s rear wheels.

Mosig’s day unfortunately got harder from there, dropping back to fifth after making yet another mistake, which allowed the likes of Metcalfe, and Gibbs to inherit a position each.

Nine laps in to the final 30-minute MX1 moto, Ferris looked back to his old self, ticking off the laps aboard his highly competitive CDR Yamaha, behind him Metcalfe had made his way by Waters to slot in to second, while Waters began to feel the pressure from Gibbs who had taken his time to settle in to the last race of the day.

As the MX1 class reached the closing stages of their final moto, lapped riders began to play in to the results, and for Metcalfe getting caught behind a back marker allowed Waters to capitalise on the situation, and in the blink of an eye Waters had reclaimed second position.

Then, in what we have learnt to expect from Gibbs, the Factory KTM rider found his form late in the moto, passing Metcalfe for third, where he also began to close in on Water’s rear wheel.

With only a handful of laps remaining, Ferris was untouchable out in front, followed by Waters and Gibbs in second and third. Meanwhile Metcalfe continued to hold down fourth from Crawford, Clout, Styke and Peters.

By the time rider’s received the last lap board, Ferris was in the box seat to take yet another race victory, and claim the win in the final moto at Shepparton is exactly what the CDR Yamaha rider did.

When the chequered flag flew, Ferris had bounced back, charging from eighth through to the top spot in race two, second went to Gibbs who managed to get by Waters in the final laps, while Honda mounted Queenslander Waters was forced to settle for third. MEGA Bulk Fuels Monster Energy Kawasaki duo Metcalfe and Crawford wrapped up the final moto in fourth and fifth places respectively, followed by Clout, Styke, Peters, Mosig and CDR Yamaha’s Dylan Long who completed the top ten.

But with a win in race one, and a second in race two it Gibbs who finally broke through to take his first round win of 2017, second overall at Shepparton went to CDR Yamaha’s Ferris, while third on the Thor MX1 podium was claimed by MEGA Bulk Fuels Monster Energy Kawasaki’s Metcalfe.

“It feels amazing to get this win, Dean has been on a winning streak for a while now, so it’s nice to have finally broke through and hopefully I can carry this confidence into the last few rounds. It was a good day for me, obviously it helped that Dean made a mistake in the first moto but in the second race he schooled us all a bit. It was really cold down here and I’ve spent a lot of time in Sydney and Melbourne lately so I’m looking forward to heading home, thawing out, and getting back into my routine so I can finish this year off strong.”

“You can’t win them all, but I really wanted to, I felt pretty good in moto one and was right where I needed to be when I fell heavily and lost a lot of time. It was my first major incident of the year so I can’t complain too much but it also shows how fast things can change and that myself and the CDR Yamaha team need to remain 100% focused to win this championship. Moto two was good and we got the race win. There wasn’t allot to separate the top few riders this weekend but I was able to get a nice little gap and ride my own race. Thanks to the CDR Yamaha team again for their massive support throughout the year and I now look forward to racing at Port Macquarie which is a new track on the calendar this year.”

“Whenever you come into a race you always want to be on the podium – on that side of things, it was a successful day. Coming into today after Nowra, I was expecting another good day of results. I had two great starts that put me up there in both motos, and then battled from start to finish really. I was lurking around the front, but I couldn’t really do more than what I was doing to get up and get the win, or push for the win. My score was 3-4 for third overall and I’m pretty happy with that.”

“It was a relatively good weekend for myself and the team. We got through to Superpole and I just made a small mistake on my hot lap, and then in race one our speed was much better. In the opening moto I came through the pack and even on the last lap I was so close to the two guys in front of me, so even though we didn’t quite make the podium, we were really happy with the result in that one. In race two we made a few bike changes, and I was just over riding the track and the bike itself. Shepparton was a track where you really needed to be on, and I just wasn’t able to find my flow in the last moto. All in all though there were a lot more positives than negatives at Round 7, we took some solid steps forward and I’m looking forward to carrying that momentum into Port Macquarie.”

“When I look back at Nowra, it wasn’t great, but I was at least on the track in racing conditions and I could see what I needed to work on. This week I was able to race with a little more intensity and my fitness level was certainly better as I was able to maintain my speed for longer periods in the race. I still have a long way to go but it’s nice to see some small steps forward and some progress on the track. Hopefully I can continue to improve as the rounds progress and be back where I belong before the championship is over.”

The 2017 Motul MX Nationals will continue, with Round 8 set to be held at Port Macquarie in New South Wales on Sunday July 30, 2017.