Glenn Scott surprised the Australasian Superbike paddock, and himself, this afternoon under cloudy skies at Wakefield Park by taking pole position for the opening round of the new look FX series.

Scott’s 58.922 was good enough for pole position in what was an incredibly tight field. Second to the Insure My Ride Honda rider was Sean Condon on the Bikebiz Kawasaki with a 58.982; relegating Glenn Allerton to third place on the grid. The BMW man struggled for grip today but is confident of coming up with a solution tomorrow to improve on today’s 59.142 when racing gets underway.

Rounding out the front row is reigning ASBK Champion Wayne Maxwell. After taking the #1 plate with Suzuki, and the team now withdrawing from racing, Maxwell found a home back at Honda.

Fronting the second row, and top Yamaha, is Cru Halliday. After a huge off earlier today Halliday recovered to a 59.201 this afternoon to secure a good place on the grid ahead of teammates Rick Olson and Robert Bugden. Kevin Curtain struggled with some electrical issues today, the team thought they have found a solution between sessions but a misfire became apparent again during qualifying which ruined the veterans chances at a good grid spot.

Chris Seaton and Dustin Goldsmith rounded out the top ten, which was covered by only four-tenths of a second.

Glenn Scott (POLE – 58.922); “A massive surprise, it has just been a building process, we only got the bikes a week and have just put them together in that time, the boys have put in a massive effort getting these bikes ready and today was the first run on the new Honda CBR1000RR Fireblade SP.

“We’ve just sort of been working at it all day in each session, we entered across two classes, Formula Oz and Superbike, for more exposure for my sponsors and the extra track time to work the bikes out and it seemed to pay off for us. We just kept turning laps and just found our feet throughout the day and the bike started to work really well this afternoon, so in that last session I felt real comfortable so gritted my teeth and just red-lined the thing everywhere (laughs), out there having fun, really, really happy.

“Massive thanks to Insure My Ride, Ipone, Shark, Honda, all my mechanics that have worked so, so hard this week to make this happen.  I think everyone in this series is in the same boat,with the mix up of championships and everyone deciding to come over to the ASC, everyone has had to pull it together late but yeah we were especially late, just purely because the Honda came into the country so late, but glad it arrived in time, we’re here, it’s great, my first pole on a 1000cc and it’s great to be on pole in the most competitive field I have seen in Australia for a long, long time.”

MCNews.com.au; I believe hardly the rocker covers have been off the engines is that right?

Glenn Scott; “We just put 20km on it on the dyno, then stripped it, put it back together using all standard parts in ASC trim, Power Commander on it, tuned it on the dyno, we just need to learn a little bit more about it, the ECU is different from 2013, and we only had it on the dyno yesterday.”

MCNews.com.au; What did it make?

Glenn Scott; “160, that’s nothing flash, every dyno is different so it is just a number, but the Fireblade has beautiful torque and it’s working great here around Wakefield Park.”

Glenn Allerton (3rd – 59.149) – “It wasn’t ideal I guess, everyone is going really fast, we’ve had some major changes between the test and now with the bike and it has made the bike a little bit different so I am just trying to get my head around it and we are changing a few things. We had a really good package at the test so we are just trying to get back to that point.”

Glenn Allerton – “Just electronics, just trying to our head around the feeling, I had a lot of wheelspin in that session, it was probably my fault I freed up the bike too much and was using all the power, and it just felt like it was spinning everywhere so I couldn’t get any good, clean drive. Felt as though everytime I was on the throttle it was spinning, we will go and change it, we’ve got all tomorrow to try and rectify the situation and get the bike driving good. The boys are working now on making a few changes and different settings, and rear shock.

Wayne Maxwell (4th – 59.1823); “We just need to keep chipping away and going in the direction we are going, the Motul Honda is starting to work really well and need to get used to this style of racing, I have got a lot of experience, we only have one bike so I don’t want to do anything famous, I haven’t had the greatest start to the year being on the ground a few times so slow and steady is the approach we are taking.”

MCNews.com.au; What’s the areas of strength of the Honda here and yourself around here?

Wayne Maxwell; “Going to be corner entry and mid corner speed I think, the Honda you know the front gets in there good and the rest sort of follows.”

MCNews.com.au; So if someone leaves you six inches you will be sticking your front wheel in there?

Wayne Maxwell; “Six inches! That will be a big gap I think tomorrow mate that will be massive, we’re going to fighting for every bit of tarmac, it will be racing and we will do our best.”

Cru Halliday (5th – 59.20); “I don’t think I crashed at the best corner on the track, it is definitely the quickest, and I lost the front going into it, hit a bump, by the time I knew it I was halfway across the paddock. But I ended up 5th with a quicker time that what I thought I could do, I have tested here a little quicker, a 59.1, but there is always room for improvement, I have got a good set-up and it is just the consistency that will be the key and just get aggressive.”

Jamie Stauffer (6th – 59.219); “Wasn’t a bad day, came here not really knowing what to expect but went alright, I think we ended up sixth  in qualifying, still got a few things we need to try, will see how we go tomorrow, try to get a good set up for Sunday and hopefully we can get out there and go pretty hard.”

Rick Olson (7th – 59.255); “We went pretty good, we have a good set-up for tomorrow. I started out a bit sketchy, haven’t been here in a while, but got into the flow of things and I think we are in a good spot for tomorrow, we are on the second row so not too far behind, it is going to be all about the start, there are so many fast guys here so it is going to be so important to get the start, we’ll see how we go.”

Robert Bugden (8th- 59.260); “We’ve taken a pretty steady approach and we are getting quicker and quicker every session, every time I have ridden the bike I have gone a little bit quicker, so we just need to keep going with that, obviously it is a pretty tough field here and I am only 3-tenths off pole so looking at that, that’s pretty good, but we are back in eighth so that’s going to be pretty interesting, I think we are going to have to fit a bullbar to it overnight but once we get going I am sure it will be fine, everyone is going to be out there pushing to go forward so it should be good racing and I am looking forward to it.”

MCNews.com.au; Your riding style, a classic flowing style should suit the Yamaha as you adapt over from the Suzuki?

Robert Bugden; “To a degree, I think I have had to smooth out even a little bit more now on the Yamaha, trying to pick up the gas even earlier, just trying to compensate for less power, that we have in this specification, so I have had to smooth it out a little but I guess it sort of feeds pretty well into my style anyway. I am happy the team has been great, Yamaha, all our sponsors have been sensational and really welcoming and I am looking forward to getting out there and going racing.”

NB: Apologies for not catching up with Sean Condon who qualified second, we could not find him in the paddock. Likewise with Supersport pole sitter Aaron Morris. Congratulations to both on their fantastic qualifying performances. 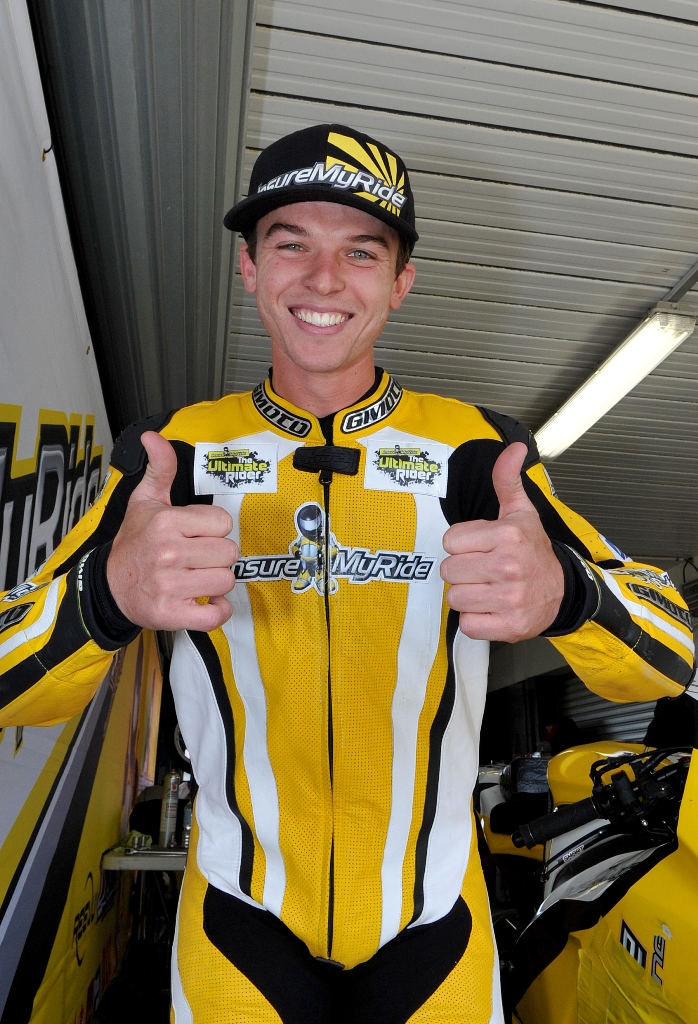