by Trev
in Harley, Latest Bikes
A A
Share on FacebookShare on TwitterShare

Harley-Davidson has lopped more than $3000 off the retail price of one of its most successful models, the Dyna Wide Glide. Despite classic Harley styling and one of the best rides in the Harley range, Harley has done some strange things with the model in recent years. 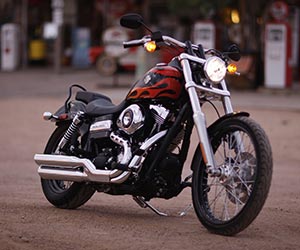 A year after releasing a special 105th Anniversary Wide Glide in 2008, Harley gave it a hiatus from the Australian line-up in 2009 before bringing it back to the range in 2010, with greater emphasis on the retro element of the styling and a 34-degree rake to the forks, giving the Wide Glide a more pronounced chopper effect than ever before.

While the Dyna range scored a much improved chassis and overhaul in 2006, they still rock and roll at idle like the Harleys of old. The front rim shakes so much you would swear it was going to fall out; thankfully once underway, the now thoroughly modern drivetrain is as smooth as silk.

The brand and the Dyna range took a monumental step forward in 1999 when the aging 1340cc donk was replaced by the new 1450cc Twin-Cam 88 engine.

Capacity was raised again in 2007 with the advent of the 1584cc Twin-Cam 96 engine. Externally the engine looked the same but internally Harley engineering had been very busy indeed.

An automatic primary chain tensioner and oil change intervals on the primary were extended to 16,000km and transmission drain intervals pushed out to 32,000km. The likelihood of oil leaks was reduced thanks to the elimination of external oil lines.

Additionally, 17 per cent more torque over the Twin-Cam 88 was delivered to the rear wheel, via the stronger and smoother six-speed gearbox, first introduced on the 2006 Dyna models.

Things have certainly moved a long way from the Evo generation and with 127Nm of torque at a leisurely 3500rpm, overtaking urge is only a tweak of the wrist away.

In the hills the Wide Glide acquits itself fairly well as long as you don’t get too carried away. The raked forks and large 21” front rim provide a somewhat vague feeling at the front, but they work well enough, to a point, at which the pegs and cases are grinding away merrily on the road anyway.

The moderately sized ape-hanger bars are positioned well, offering reasonable comfort along with acceptable control. The bars can work themselves loose over time which is something owners need to keep an eye on. Recommended dealer service intervals for engine oil change and minor servicing are 8000km. 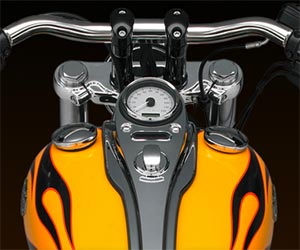 Foot forward controls are traditionally standard on this style of cruiser. The Wide Glide items are well positioned and work better than most. The indicator buttons are situated on each bar and are self-cancelling. An ultra-short 680mm seat height is a godsend to shorter folk and despite their heftiness, Harleys have always been easy to handle at low speed or in the car park.

Braking performance can best be described as adequate. Little effort is required through the lever to bring the full capabilities of the single front disc into action. Stronger brakes would certainly overtax the soft front forks, which struggle even coping with the power of the single disc.

These days Harley sources their braking components from Brembo, with ABS optional throughout the range. This is Harley though, so no ugly ABS sensor ring on the brake disc – Willy G would never stand for that eyesore! Thus Harley’s engineers have secreted the ABS trigger sensors in the wheel bearings. Smart, but not too sure what impact that has on the price of wheel bearings when it comes time to replace them…

The Wide Glide seat is excellent, one of the best I have sampled on a cruiser. This fact, combined with a more compliant rear suspension system than earlier Harleys, means that the Wide Glide proves to be one of the more comfortable cruisers on the market. Still, a really big bump will overcome the short travel rear suspension and give you a good smack in the kidneys to wake you up.

The pillion seat certainly doesn’t look all that inviting. If you want to stay on speaking terms with your partner then I recommend a perusal of the accessories at a Harley dealership to try and come up with some options to help reduce their coccyx damage. For long highway stints a removable screen will also come in very handy for the rider, along with luggage options.

Many cruiser models favour style at the expense of practicality, but the Wide Glide does an admirable job of marrying both these traits. Reasonably comfortable and with 300km easily achieved between fills of premium unleaded, it’s one of the very few cruisers I would consider touring on.

Although Harleys haven’t really changed their looks or layout since God was a boy, they have still managed to come a very long way. Ultra smooth on the open road with that big torquey twin loping away beneath you lends a certain serenity to it all. As ridiculous as that sounds if you stand next to a Harley with open mufflers!

Now in its 18th year of production, the Wide Glide remains one of the most handsome machines ever produced by Harley and at $25,750 ride away, it has never been more affordable than it is right now.

Personally, I still rate the Street Glide and Road King as by far the best bikes in the Harley range, but when it comes to the more fashion-driven machines in the Dyna or Softail ranges, the Wide Glide is the best of that crop. 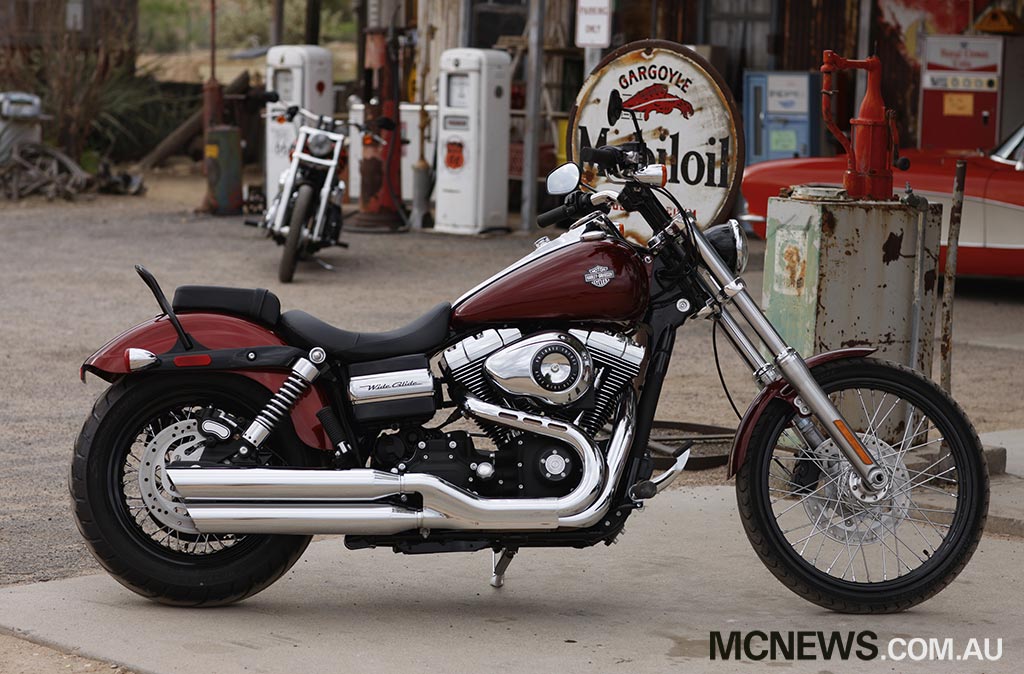 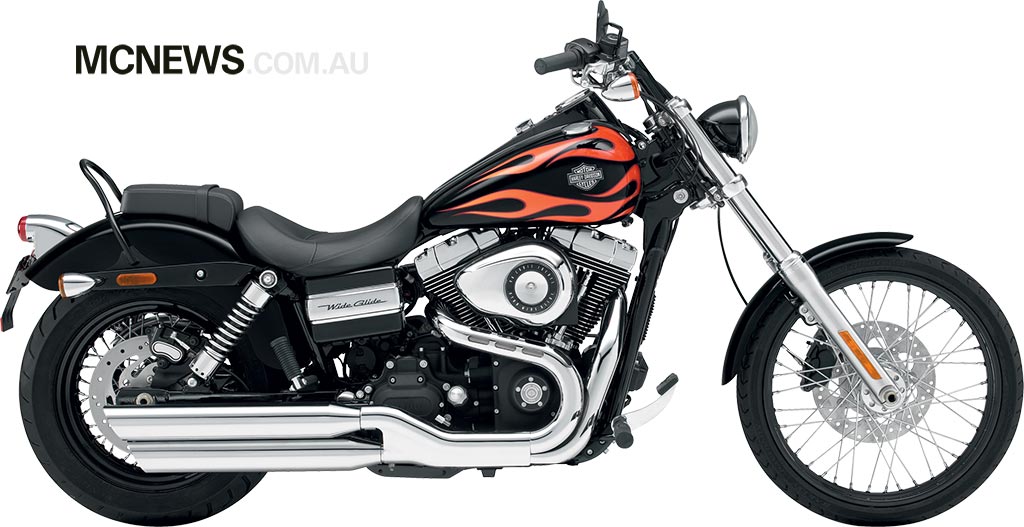 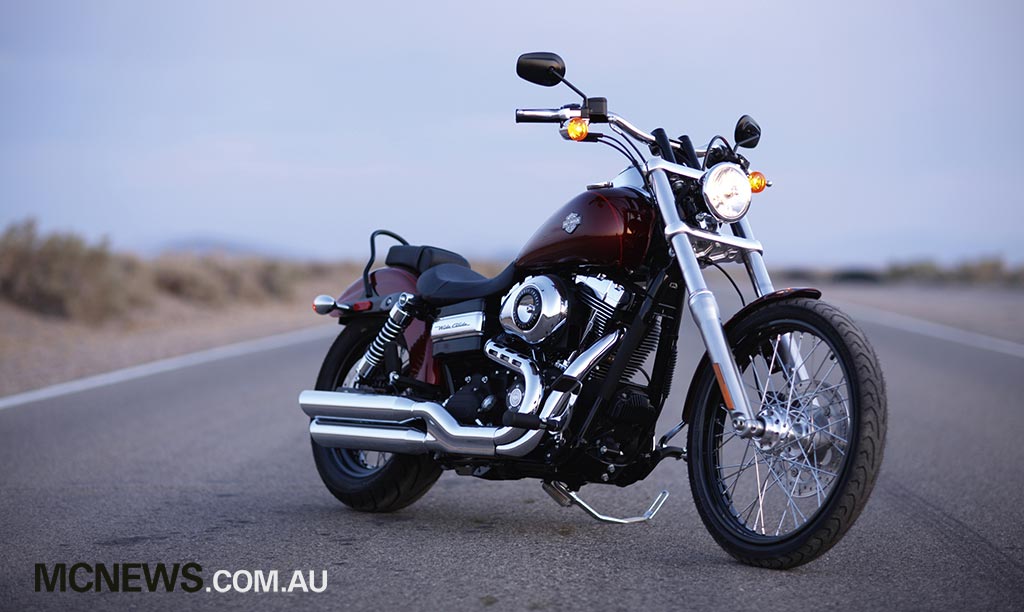