History of the Suzuki GSX-R 750 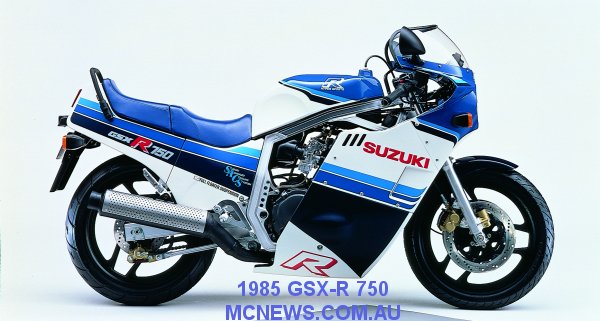 The lineage is long and proud.  The first GSX-R hit the market in March 1985 and the sportsbike world was never to be the same again.

Light weight (only 179 kilograms dry and about 40 kilos less than any of the opposition) and good power from it’s flat-slide equipped engine was a revolution for production motorcycles. An attractive full fairing design with endurance style twin headlights completed the picture and the early GSX-R remains an attractive machine even today.

1986 GSX-R750G
1986 saw the GSX-R get a 25mm longer swingarm and radial tyres. The headlights were upped in power. The big news was a new GSX-R750R limited edition model which featured a dry clutch, steering damper, larger brakes, solo seat and a host of suspension improvements.

1987 GSX-R750H
In 1987 the GSX-R became slightly more refined and the standard bike scored some of the previous models limited edition ‘R’ model goodies such as the stronger 41mm front forks and steering damper.

The bike also now had the 310mm discs as standard fitment. Tyres and rims grew wider and a gold chain added to the bike’s looks.

The light aluminium frame got stronger and the forks were now up to 43mm in diameter.

New ‘SlingShot’ carbs were fitted in the aim of improving the responsiveness of the new shorter stroke engine. Air ducts were added to the front of the fairing to try and improve induction efficiency.

1989 GSX-R750K and GSX-R750RK
The 1988 model took out both the manufacturers and riders World Endurance titles and the 1989 model aimed to capitalise on this success.

Gear ratios were revised and another limited edition ‘R’ model was born. The GSX-R 750RK known as the double R was released in a limited run of 500 bikes.

1990 GSX-R750L
Drawing from the now vast racing experience with the GSX-R Suzuki chose to give the standard GSX-R 750 some of the previous double R features.

1991 GSX-R750M
1991 saw the GSX-R become more streamlined in the aim of reducing aerodynamic drag. A bigger seat improved comfort and a twin light rear end added to the new look.

The Valve gear system was changed to a one rocker arm per valve system and the use of shims for valve adjustment was claimed to reduce internal friction by 5%. A new intake and exhaust port design aimed to increase high rpm power. 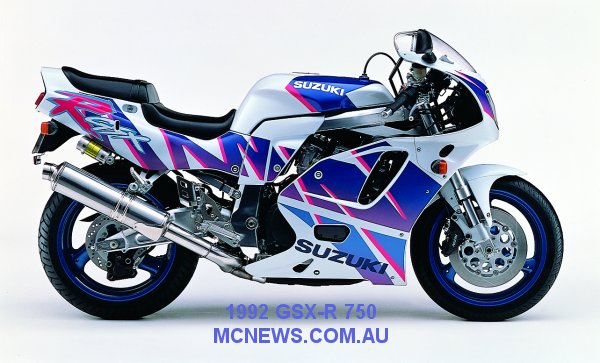 Liquid cooling made its debut to  aid the GSX-R under racing conditions. Cylinder pitch was reduced by 10mm and crankcase width came down by a staggering 57mm.

A newly designed pipe frame with sand-cast steering head was claimed to improve torsional resistance by 24%. The design of the swingarm and shock linkage was also improved.

1993 GSX-R750WP
The second year of the water cooled engine saw the crankshaft moved lower in the crankcase to improve C-of-G and a reduced valve angle aimed to improve the level of intake charge.

Thinner valve stems and ‘Direct-Action’ valve train aimed to improve high-rpm responsiveness. The compression ratio was upped to a very high 11.8:1 which improved throttle response. This along with an improved cool air intake served to increase the top speed.

The weight of the GSX-R had bloated out a little with the arrival of water cooling in 1992 and the 1994 model aimed to redress this problem somewhat by reducing weight by 9 kilograms over the 1993 model.

1995 GSX-R750S
The 1995 model feature mainly cosmetic changes to complement the huge mechanical changes from the previous year. The fork tubes went from blue to silver and new colour schemes joined the range.

The 1995 model was the last GSX-R to carry the traditional double-cradle frame. 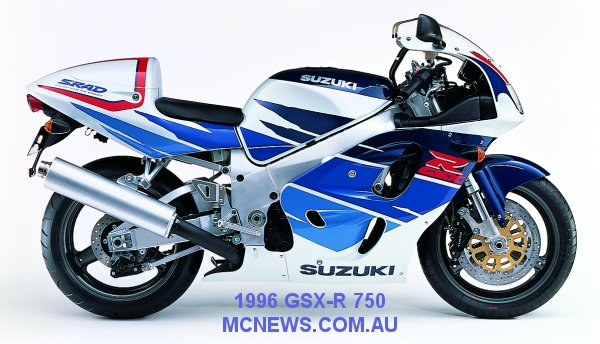 1996 GSX-R750T
Another big change for 1996. A new twin-spar frame derived from GP racing held a lighter and more compact engine.

A shorter stroke was employed once again, now down to 72x46mm. A new 3-piece crankcase and more forward tilted engine aimed to place more weight over the front wheel. Ram-Air made its debut on the GSX-R and electronically assisted 39mm carbs delivered the intake charge.

More magnesium was employed in the engine covers to reduce weight and made the 1996 model as light as the original 1985 model, 179 kilograms dry.

1997 GSX-R750V
This model was largely unchanged from 1996 with only aerodynamics and colour choices being changed. 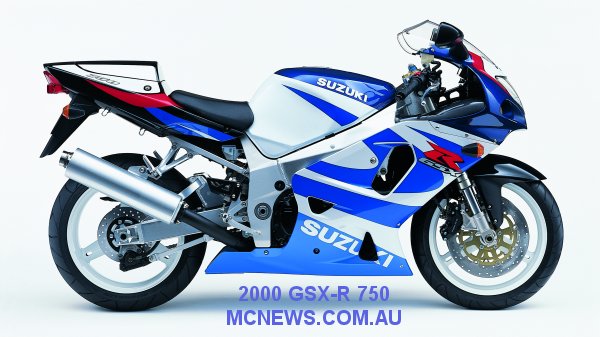 2000 GSX-R750Y
The new for 2000 ‘Y’ model brought unheard of power to the 750cc class which by now had no manufacturer game to take on Suzuki in this capacity class.

The new 750 beats larger sportsbikes for top speed and acceleration, in the 750 class it has no challengers.

A narrower valve angle, 12:1 compression and much smaller engine dimensions are the big changes but everything in the engine design is now at the forefront of technological development.  The Fuel injection system gained two butterflies per cylinder that aimed to increase responsiveness from idle through to redline.  A dry weight of 166 kilograms rounds out this potent package.

2002 GSX-R750 K2
For 2002 the GSX-R scored an adjustable swingarm which provides adjustment for height.  The SDTV fuel injection system scored some improvements and an automatic cold start idle feature did away with the need for a fast-idle lever.  Both headlights now remain illuminated, even when in low beam.  New mirrors.  The pipe leading to the muffler was changed to fully polished stainless steel. 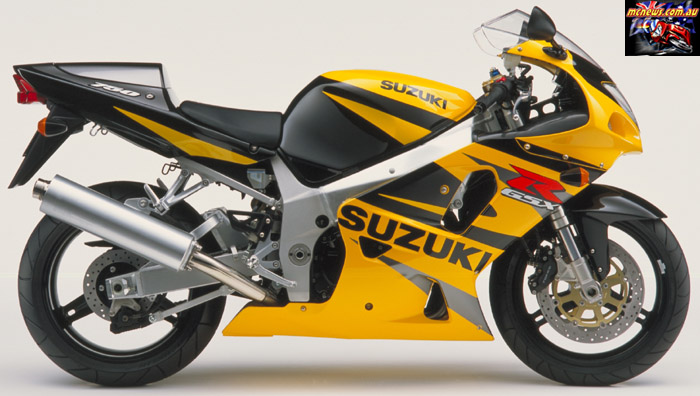 2004 GSX-R750 K4
For the K4 model the GSX-R750 scored a new cylinder head, radial mounted calipers, radial master cylinder, new instruments with shift light.  Weight was down to 163kg and claimed horsepower was up to 148hp. 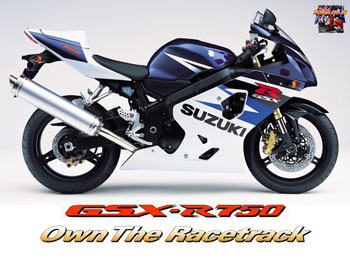 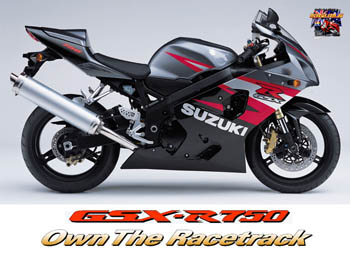 2005 GSX-R750 K5
Special 20th anniversary model introduced with special colours and graphics resembling that of the first 1985 model. The anniversary model features special logos and a serial number fitted to the top triple clamp while the ignition key features the GSX-R logo. 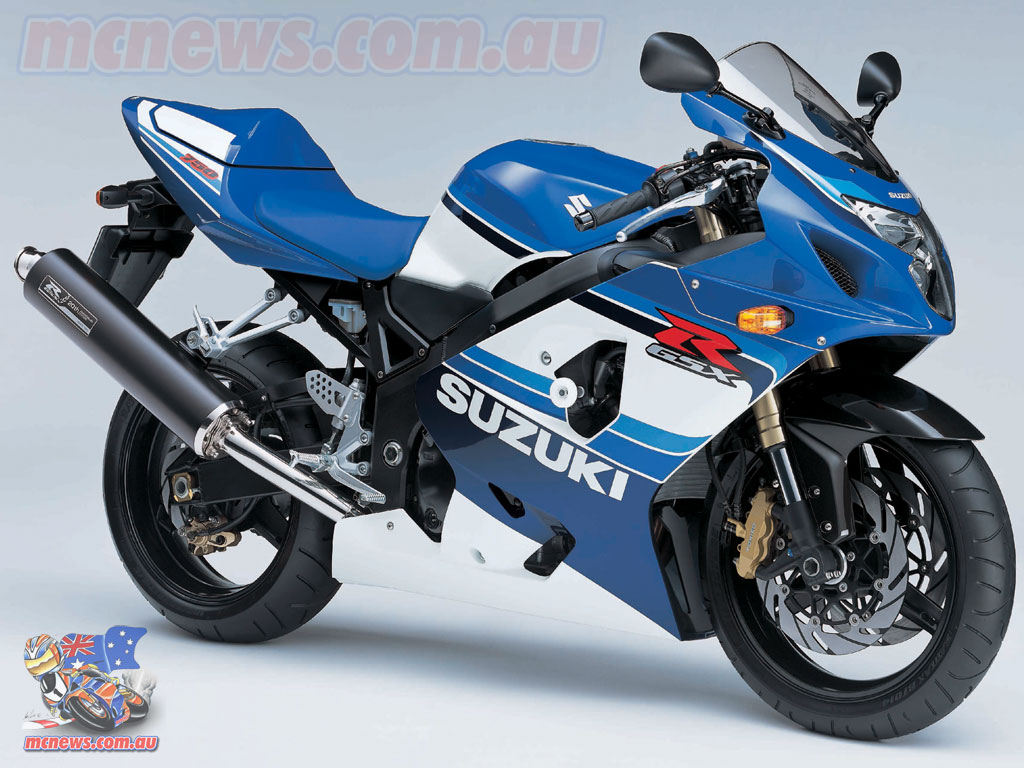