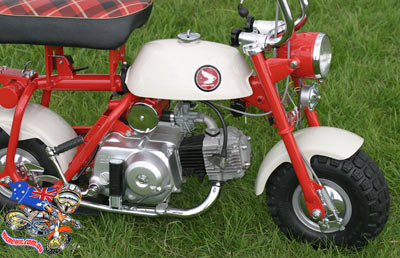 There are many ways of achieving celebrity status in the motorcycle world; a bike can have an abundance of power, razor sharp handling or stunning looks. But there’s one machine which has none of these and is still revered: the utterly quirky Honda Monkey Bike.

The Monkey bike was an accident of time and place and was never intended to be a commercial product. In 1961 Honda was developing its huge Suzuka circuit complex and wanted something for enthusiastic Japanese children to play at being bikers.

Honda already had a ready made power plant in the 50cc C100 Cub engine. This motor was bullet proof and, being horizontally inclined, could be fitted into a tiny chassis. It also had a semi-automatic gearbox so the baby Japanese bikers just had to open the throttle and away they went.

The first Monkey had a rather neat fibre-glass petrol tank but when production went into full swing, raids on Honda parts’ bins were made. The tiny frame – with no rear suspension – and the crude front forks were the major elements unique to the Monkey Bike – or the Z100 as the bike became known.

To Honda’s surprise, the world fell in love with the Monkey Bike. They came three to a crate and retailed for £67.15s.5d in Britain and the fact that they were truly unique endeared them to the widest of audiences. Monkeys were everywhere from the Swinging Sixties’ Carnaby Street to that bastion of hard core bikers, the Dragon Rally. The magic thing about the Monkey was that it was pure, unadulterated fun to ride and could be enjoyed by everyone – regardless of age or riding experience. A minute after sitting on a Monkey you were an expert.

Honda soon realised they had a runaway sales success on their hands and Monkeys grew up and became increasingly sophisticated. Monkeys came in off-road versions, road race replicas and dedicated commuter bikes which were seriously intended for road use.

Today, Monkeys have a fanatical following and there are some incredible variations on the traditional theme with everything from turbo-charged race bikes to gold plated show machines and everything imaginable in between.

The following for Monkeys is as strong as ever. Honda still produce the Monkey Bike in Japan in two models and these are currently only available in the Japanese market.

Collectors now pay big money for the first Monkey bikes – and the price is rising daily! 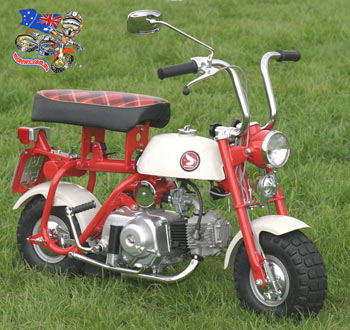 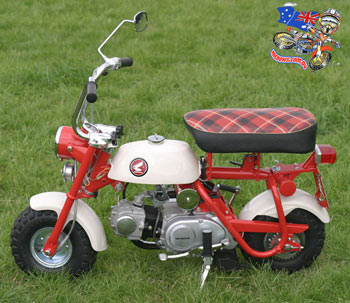