23 years go, BMW Motorrad was the first motorcycle manufacturer in the world to fit its machines with the anti-locking system ABS, setting a milestone in active motorcycling safety at the time. As of today over 1.2 million BMW motorcycles have come off the production line fitted with ABS. ABS can be selected as an optional extra in every current BMW model.

While the first generation of BMW Motorrad ABS already offered a high level of additional safety by ensuring lateral grip on vehement straight-ahead braking manoeuvres, even on slippery surfaces or with abrupt changes in friction coefficient, BMW ABS II introduced in autumn 1993 improved the range of performance even further. At the time this marked the debut a completely new design of the traditional BMW boxer engine in the BMW R 1100 RS, which also ushered in the second innovation stage in the field of ABS. Here, the more sensitive regulatory capacity of the system was a major technological advance. A short while later, BMW ABS II was also introduced for the new BMW R 1100 GS – in a form which was specially adapted to the needs of a high-performance travel enduro and disengageable for off-road use.

Another major step forward in terms of ABS development was the BMW Integral ABS introduced in 2000, incorporated not just in the BMW Motorrad road models but shortly afterwards in the GS models, too.

In the course of ABS development with a view to increasing ride safety even further, BMW has also created drive control systems such as traction slip control or most recently dynamic traction control DTC for the new BMW S 1000 RR.

The high point of ABS development for motorcycles as it currently stands is the new BMW Motorrad Race ABS, developed for the supersports bike S 1000 RR. The rider can press a button to select engine characteristics including the relevant Race ABS characteristics for a range of conditions such as a wet surface (“Rain”), road (“Sport”), race track with supersports tyres (“Race”) and race track with slicks (“Slick”). These are combined with the various modes and are mutually harmonised for maximum safety. In this individually adaptable rider assistance system, the rider himself selects the level of support to be provided. For example, unwanted early intervention of ABS while riding in sporty style is now a thing of the past.

The new BMW Motorrad Race ABS is a completely newly developed system which is significantly lighter than previous part integral systems. With a control unit weighing just 1.5 kg and a total weight of just 2.5 kg, it is ideally suited for use in supersports motorcycles. But in addition to weight the system especially provides even further improved regulation response.

In addition to an excellent set-up, the main reason for this is the use of a total of four pressure sensors which operate with a very sophisticated rear wheel lift detection system to distinguish even more effectively than before between a bump and a locking rear wheel. In “Race” and “Slick” modes, the rear wheel lift detection function does not interfere with the rider’s desire to brake. In this way, the “Slick” mode allows particularly skilled riders to perform so-called brake drifts without having to do without the benefits of a front wheel ABS.

The group have decided that an ABS system designed for racing need not necessarily be limited to road bikes. For this reason, Husqvarna Motorcycles is presenting ABS for off-road racing in the current flagship model, the TE 449.

BMW Motorrad first brought out an off-road ABS with lockable rear wheel in 2007. A comparable system is already in serial production in the form of the “Slick” mode of the ABS in the BMW S 1000 RR. Here, the system allows the rider to block the rear wheel for so-called brake drifts by deactivating the ABS function in the rear wheel. This is a fundamental riding dynamics function which an ABS must offer to be suitable for off-road racing purposes.

The system used in the development showcase Husqvarna TE-449 is a so-called dual channel ABS with components supplied by both the established development partner BMW Motorrad and Husqvarna Motorcycles itself. It consists of two wheel sensors and the associated pulse wheels for detecting the rotational speeds of the front and rear wheels, an ABS pressure modulator, a hydraulic system and an electronic control unit. Due to the particular dynamic requirements of off-road racing, ABS regulation occurs solely at the front wheel. The rear wheel brake is not regulated, so the rider can deliberately lock the rear wheel.

Currently, the ABS systems generally used in serial production motorcycles are only partially suitable for off-road use: their regulation specifications on surfaces such as gravel does not allow for maximum possible brake performance.

For this reason, the relevant parameters and in particular the slip thresholds in the Husqvarna Motorcycles Off-Road ABS have been adapted for improved braking performance over rough terrain. Since there is no ABS regulation of the rear wheel, the specifications for road speed and wheel acceleration were also optimised. The additional use of the rear wheel rotational speed supports the reference speed for the front wheel, making the Husqvarna Motorcycles Off-Road ABS particularly robust.

The Husqvarna Motorcycles Off-Road ABS supports the rider when braking, allowing him to concentrate fully on the track and providing enhanced braking safety in the threshold range in particular. Less stress and greater comfort are other positive effects which allow hobby enduro riders to stretch their personal limits and thereby enjoy even greater off-road fun.

The Husqvarna Motorcycles Off-Road ABS has an adapted pressure point feel integrated in the system, thereby ensuring that the rider remains in touch with the regulation status. During braking within the regulation range, the rider feels a pulse in the handbrake lever – providing clear, transparent feedback on the braking manoeuvre.

The dual channel system of the Husqvarna Motorcycles Off-Road ABS also offers considerable potential for further development. For example, it would conceivable to provide two ABS modes for off-road and on-road use, activated separately by the rider, with ABS regulation of the rear-wheel brake for travelling on the road. 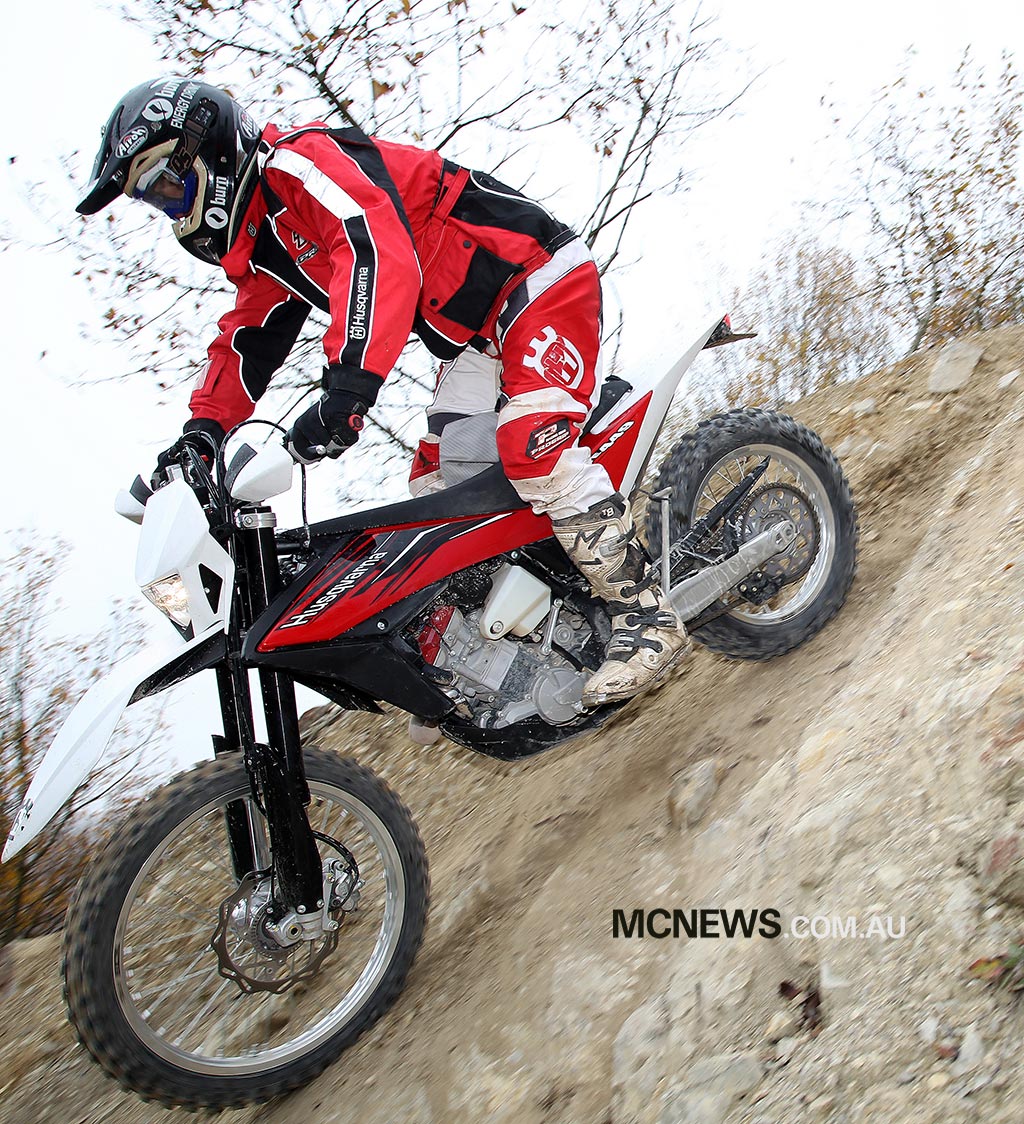 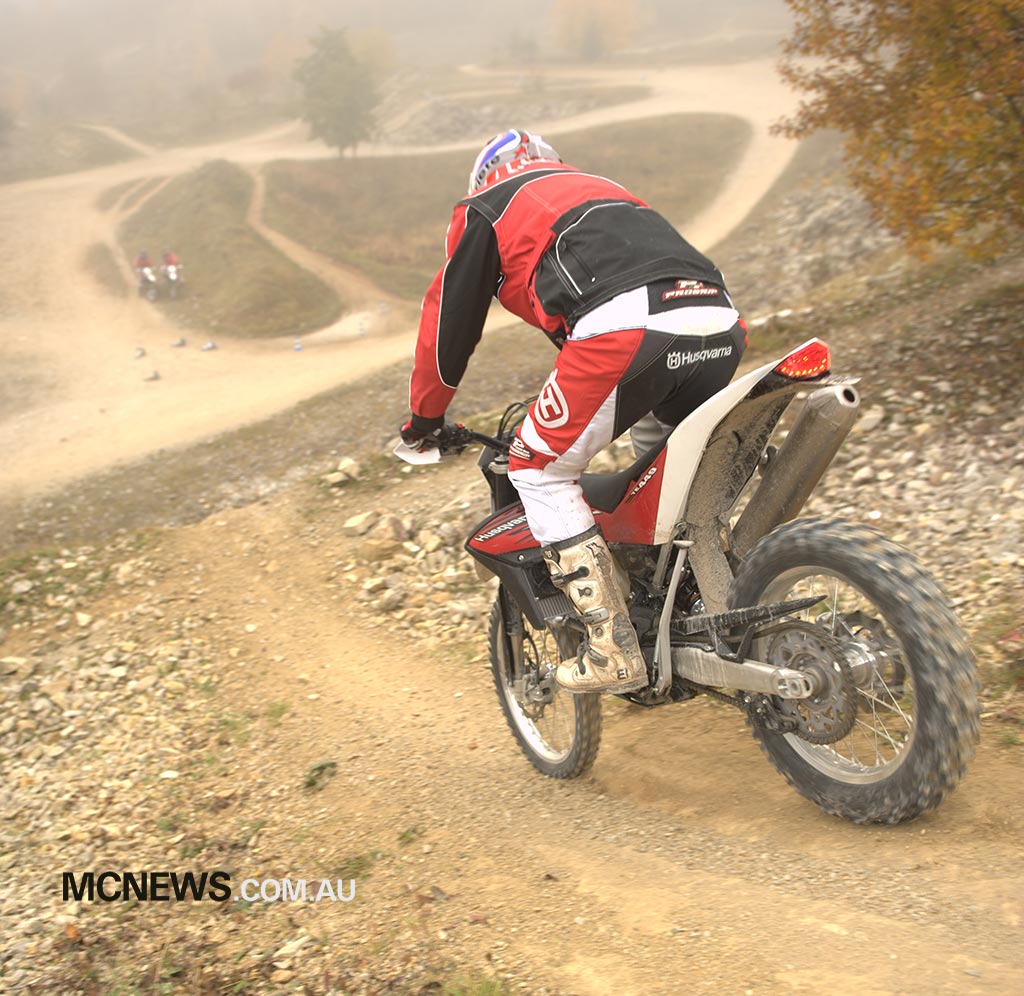 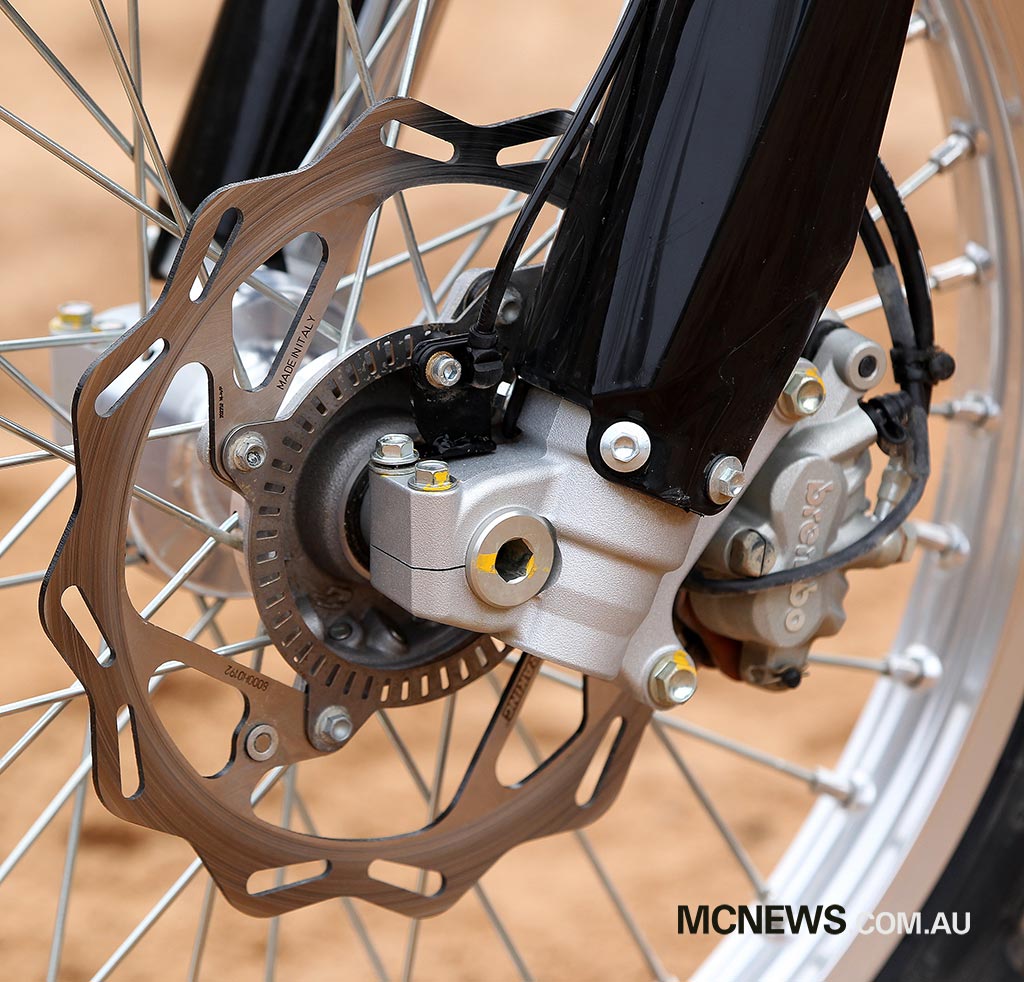 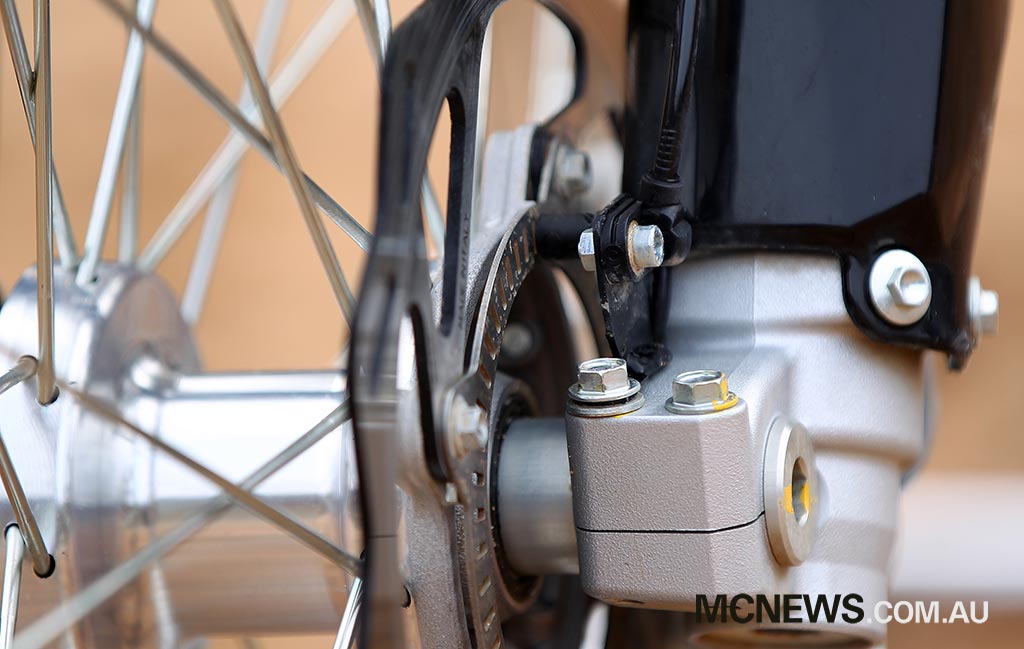 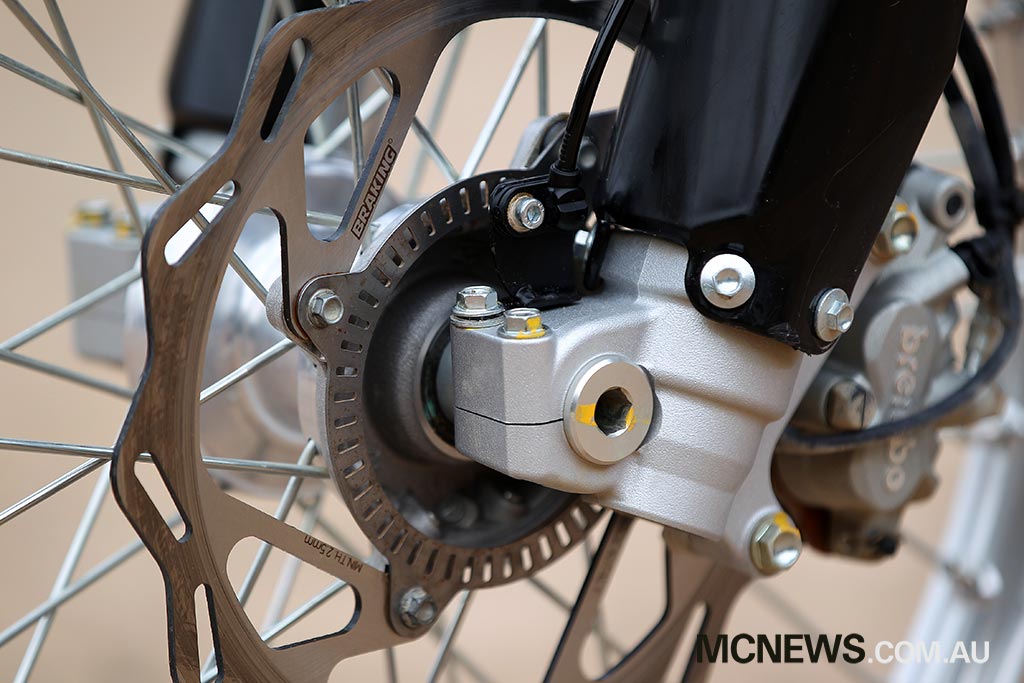 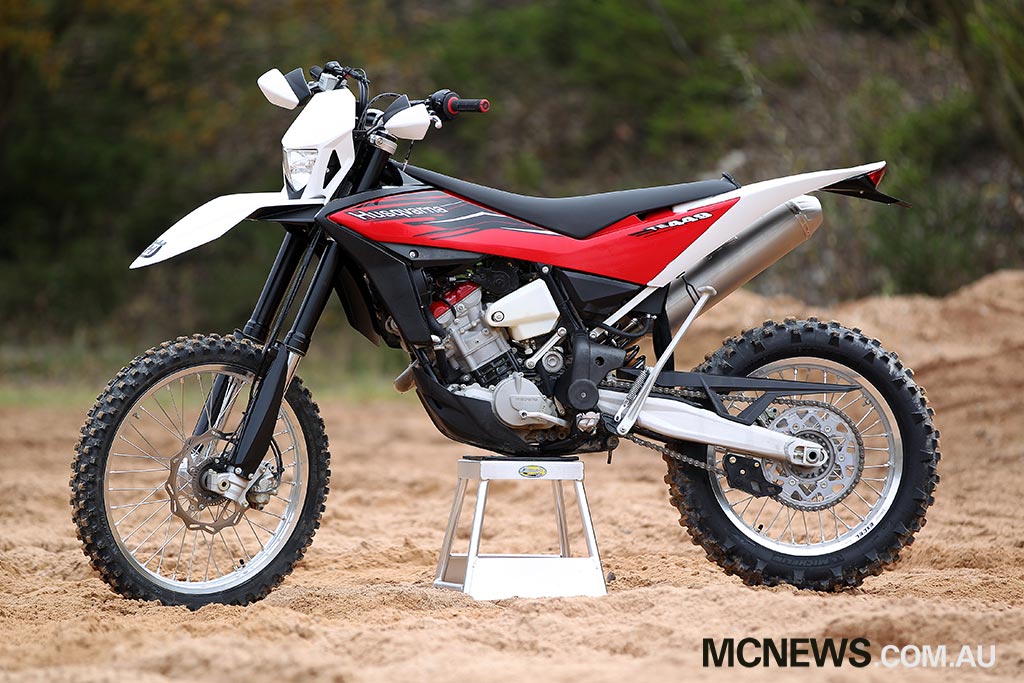