Catching the attention of the U.S. KTM Team, Brett Metcalfe took the big step and left family and friends in Australia to move to Southern California to compete in the AMA Supercross and Motocross series.

Overcoming a major shoulder injury last year and then a hand fracture just before the 125 East Region Supercross Series started, the likeable 18-year-old quickly showed promise at the third round at the RCA Dome in Indianapolis by finishing fourth. Then after getting his first podium at Houston (third), Brett had a solid second place in the bag at Pontiac until a last lap crash took him out — adding his name to the star-crossed, injury-filled KTM team.

Showing maturity not often seen in a young upcoming rider, the quiet Australian is taking a level headed approach to his racing. The thing that impresses me is that rather than going all out for every win, he’s taking it step by step. And so far it’s been paying off, as he’s been KTM’s top ranked rider.

Brett, I’d like to start with what happened at Pontiac?
You know I’m not sure. I started to see my bike smoking a bit on the last lap and then when I went for a triple and I bounced wrong for some reason and went flying. I crashed really hard and actually thought I broke my hip – it was hurting a lot! So I went to the hospital right away and they checked it out. Fortunately there was no fracture, just a lot of bruising and swelling. So I’ll be okay in a few more days and be ready for my next race at the 125 Shootout in Las Vegas.

How do you feel about finishing fifth in your first year of supercross?
I feel great! Each race I was progressing and it was looking good for me to finish second at Pontiac – until my crash. Had I not crashed and finished second I would have beat Kelly Smith and finished fourth in the series. But thinking about it; what is the difference between finishing fourth or fifth? It might be different if we would have been battling for a podium finish in the series, but like I said I’m happy and so is the team. I did better than we both expected. I of course didn’t want to crash, but it’s no big deal, I’ll recover from it and come back even stronger!

Didn’t you come into the 125 East Series with a hand injury?
Oh, it’s fine now, although the hand sort of affected me a little bit more than it should have. I was just coming back from my shoulder reconstruction that I had in May of last year. It had been eight or nine months where I hadn’t even been on the starting line, so I didn’t even get a warm up race before the first round in Minneapolis I just jumped straight out there. At that time my fractured hand still bothered me, and I didn’t start the series anywhere near top shape. But in each round I’ve progressed and have been getting better and better.

As you said Brett, at each round you’ve been improving. You had a third at Houston and then were a solid second at Pontiac until your crash. Are you ready for a win?
Right now , I don’t really think I would be able to win; I’m just not quite 100% yet. I feel good and comfortable in my riding but I just don’t feel I’m ready. I can definitely stay on the podium and that is my aim. If I can go for the win, for sure I will, but right now I’m just taking it weekend by weekend, and I’m not rushing into anything. Coming into the start of the supercross series, I went to the first round just hoping to qualify! I was pretty nervous after not racing for so long. I wasn’t even sure if I was going to be able to hold onto the handlebars with my hand, because it was pretty sore. But I got through that and ended up eighth in that round so that was pretty cool. I’ve learned an awful lot in a short amount of time! Each weekend I’ve been progressing and now that I’ve been on the podium I’m aiming for more. To get on the podium was pretty tough, and then to go on and win is going to be even tougher. So I’m just going to take my time and it will all eventually happen.

How much has racing Australian supercross helped you prepare for the American stadiums?
It’s helped a lot, and I think we’re pretty lucky in Australia. It’s the same with Chad Reed, and pretty much all the Australian kids who ride. We can start riding supercross at the age of 10, doing local supercrosses and stuff, so we pretty much adapt to supercross quickly. There are now a lot of Australians over here that are doing well in supercross, so it’s definitely proving to work, and has helped me a lot. Some countries like Europe and South Africa don’t have much supercross. I know Grant Langston had never ridden a supercross until he came here. So, it is a big advantage for Australians to be able to start riding supercross at a young age. When we get here, it is already second nature to us. We just have to go out there and race; we don’t have to learn how to ride supercross. In Australia we can race on the same tracks as the pros — at 13 years of age. Actually I did my first supercross race when I was probably 10, maybe even younger!

After racing in Australia in 2001, you then went to the GPs in 2002. How was that whole experience?
It was really completely different, and a big step going from Australia, where I didn’t really race a whole lot that last year because I had a shoulder operation, to racing the GPs. I didn’t get to even race the full season in Australia. So to go from Australia to Europe and race was a pretty big step. Racing the one moto format is a lot different and it takes a little bit to get used to. But I liked racing and living in Europe. It was fun and really nice there.

How were your results in the GPs?
Well, actually there’s not much to talk about there. At the first round I got fourth. At the second round I had a big crash the week before and hurt myself, and was also sick, so that weekend was absolutely hopeless. The next weekend I was 14th and then at the following GP I wrecked my shoulder and that was the end of my European career.

Do you spend much time with fellow Australians Chad Reed, Michael Byrne or Craig Anderson?
No not really. I’ve known Chad since I was a kid, maybe when I was five or six years old. I’ve got an older brother, Shane, back home and those two raced together all the time. We always knew who Chad was and pretty much all grew up together, racing each other every now and then. But now I don’t really get to see a lot of Chad, Michael, or actually any of the Australian guys over here. We are all so busy with our different schedules, and being on different teams, that the only times I see them is on the weekends and we don’t really have a lot of time at the races to socialize!

Is there any chance that your brother will follow in your footsteps and come over to the States?
I’m not sure what he wants to do really. He is very talented rider, and I would love it if he came over here. Hopefully he will one day. That would be really cool to have him and me over here together.

How have you liked Southern California so far?
So far, it’s been great — the weather is perfect. Although we’ve actually had quite a bit of rain in California this year, it’s been really good for riding. Having the KTM test tracks and all the other available tracks to choose from is super and riding-wise my job during the week is perfect. Other than that, California is really good, and it is a nice place. I like living here, everyone seems pretty cool and friendly and I haven’t any problems so far. I guess there are a lot of distractions around here but I’m not a party person so I’m not into that stuff at all. I don’t go out too much and mess around.

Still it must be a bit of an adjustment being so far away from your family.
Yeah it is an adjustment. When I was in Europe racing the GPs, my dad was with me working with the team that I was riding for. He was driving the team truck so that was kind of cool, and we spent a lot of time together. It was a perfect set up. This year we tried to do that here but it didn’t end up happening. So I’ve moved to America by myself and have pretty much handled everything. It’s okay, but at times it has been pretty tough being alone all the time; sometimes you need a helping hand every now and then. If I’d have gone to Europe by myself, it would have been really tough, but America is as close as I can be to home in Australia. It’s pretty easy going.

Do you follow the World Motocross GPs or the racing in Australia?
Yeah, I keep up with Australian motocross because my brother is racing back there, so I like to find out how he is doing and stuff. We talk to each other all the time about our racing. Normally I keep up with the European scene as well; since it’s just starting I haven’t taken much notice of it but I will when the season gets in full swing.

Brett, to end things, with the U.S. Motocross Championship approaching, what are your expectations for finishes?
I’m not really sure how it is going go, but I’m pretty confident I’ll do quite well in the nationals. My main goal is to progress from each round, do as well as I can and give 100% and by the end of the season I hope to be up front somewhere. I have no idea who will be fast! I’m just trying to get to know the guys over here right now. I can’t wait to race the tracks, they all look pretty cool. It is going to be wide open – and it’s going to be good! 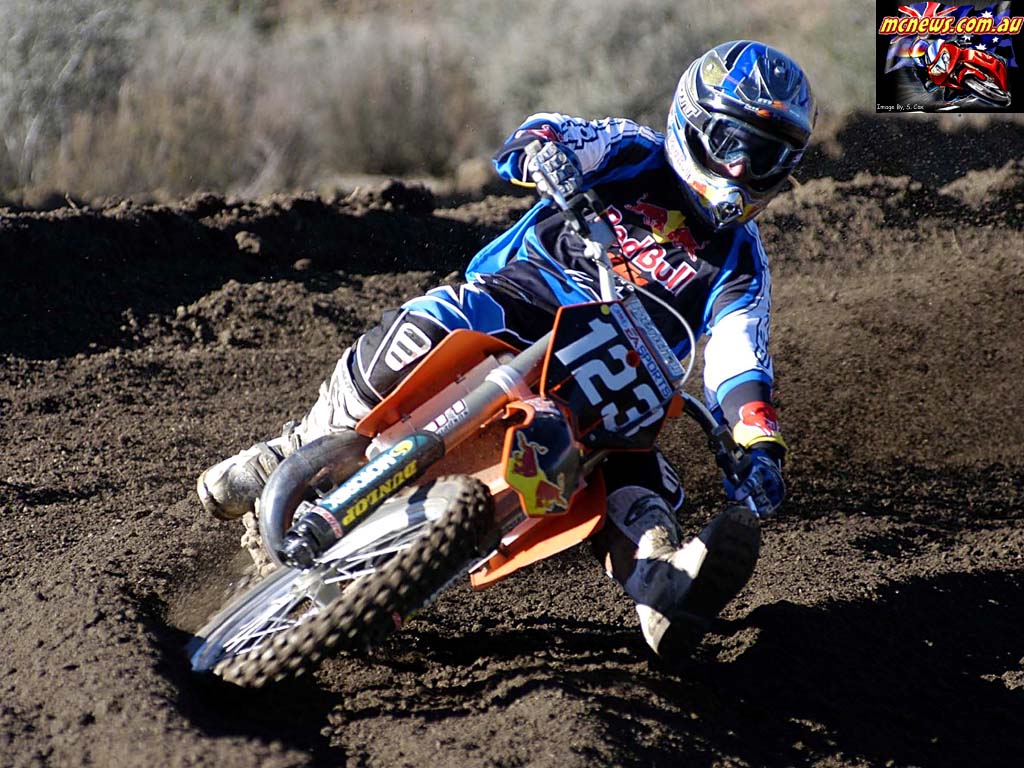