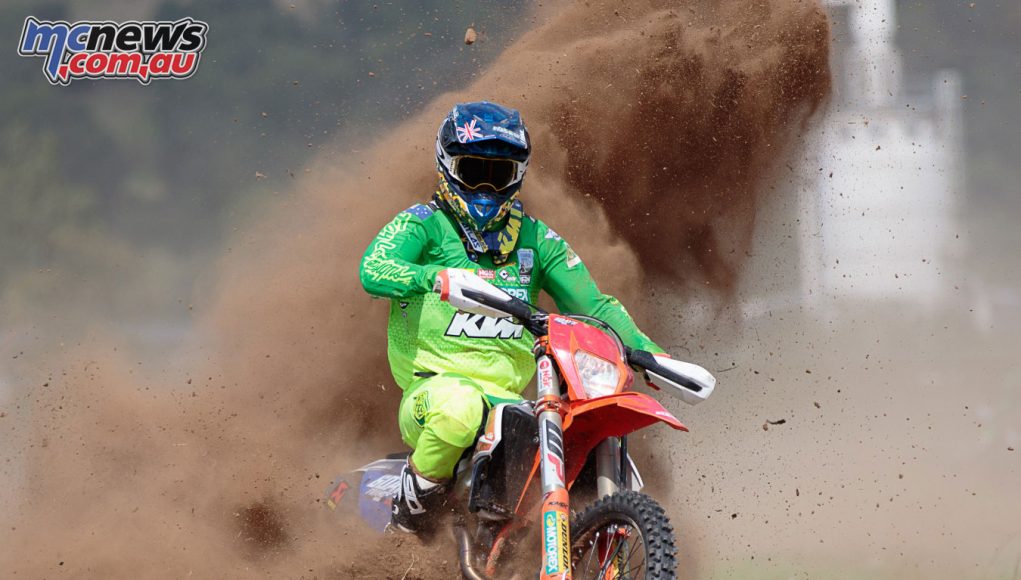 Day three of the ninety-second running of the FIM International Six Days Enduro (ISDE) in Brive, France saw competitors compete in dry and dusty conditions – albeit cooler – for a third consecutive day, but with a new course and new special tests.

Continuing to hold firm at the head of the FIM World Trophy classification, France stretched their advantage over Australia to five minutes and nineteen seconds while France’s FIM Junior World Trophy squad moved to the top of the results, thirty-nine seconds ahead of Italy.

Lyndon Snodgrass continued on today as the sole Junior World Trophy Rider and reached the halfway mark of the six day enduro. It’s been a very solid debut for Snodgrass, as he sits twelfth in an extremely competitive E3 class with two of his Senior teammates. Snodgrass even managed to beat several of his Australian elder statesmen in several tests again today and shows what it takes to match the worlds best in future events.

“Day Three done, and it was a tough day with plenty of mistakes in the first test, it was a really cool trail and we’re on to a fresh one tomorrow. Can’t wait to get out there again.”

Australia also sit five minutes and forty-nine seconds ahead of the USA in the Women’s World Trophy class.

Fifth overall and second in the FIM World Trophy team competition with Australia, Daniel Milner – KTM is well and truly putting the disappointments of exiting the 2016 ISDE on day one behind him.

“I guess with what happened last year it made the team, and certainly myself, hungrier to do well. As the defending World Trophy champions to lose riders on the first day in Spain, that was really disappointing. We also knew that to do well in France against the French team we’d need to be on top of our game. We’re only two days on so far, but France have been doing an amazing job, we just have to keep up the pressure and see what’s what at the end of the event. Day one was a struggle for me, with way too many crashes. I had one really big off, but thankfully things weren’t too bad. I lost a little time in my class, but day two went ok. With new tests on days three and four the French riders will be fast, but I’m going to push hard and see if I can climb a few places in the overall standings.”

With three of their riders finishing inside the overall top four of the third day’s individual results, France were again the nation to beat in the FIM World Trophy team competition.

“Today was a good day for me and team France, the competition was very close today with many new special tests, some slippery, some not. It was surprising how quickly some of the tests became rough and rutted. But I pushed really hard and came into the final test needing to win, which I managed to do. I’m very happy about that because I was disappointed earlier in the week. The French team were strong again and now we hope that we can continue pushing during the second half of the week.”

France are now thirty-nine seconds ahead of Italy in the overall standings with the USA third, Great Britain fourth and Chile – hosts of next year’s ISDE – fifth.

Finishing ahead of the USA and France on day three, even with team rider Jessica Gardiner – Yamaha riding with a broken finger Australia look strong for yet another Women’s World Trophy team win. With the USA sitting second in the Women’s class standings, France hold third with Sweden and Italy rounding out the top five.

“I had an average day. The tracks were good but too many crashes cost me a lot of time to Laia in the overall but Australia have extended our lead in the Women’s title hunt so I am happy. I’m hoping with new tracks tomorrow I can have a better day and stay upright to catch back up a little.”

Jeremy Tarroux – Sherco was the fastest rider in the Enduro 1 class on day three, placing five seconds ahead of Spain’s Josep Garcia – KTM with Eero Remes – TM third. In the overall E1 class results Garcia leads the way, just seven seconds ahead of Tarroux with Italy’s Davide Guarneri a further seven seconds behind.

The fastest rider in the Enduro 2 class was France’s Loic Larrieu – Yamaha, who placed close to ten seconds ahead of Nathan Watson – KTM who after two difficult days finally found his rhythm. Third went to Australia’s Daniel Milner – KTM.

“Day Three is now behind us and it was my birthday as well! I didn’t crash today so that was a bonus. I had a couple of good tests but got caught behind some slower riders later in the day. The Team is really strong at the moment. We’re hoping for some rain in the coming days to help us catch the French.”

At the mid-way point of the 92nd International Six Days Enduro KTM 1 have moved to the top of the Manufacturer’s award with Nathan Watson – KTM, Josep Garcia – KTM and Christophe Nambotin sixteen seconds ahead of KTM 2 with KTM 3 in third.

Competition at the top of the Club team category is extremely tight with Italy leading the way, just fourteen seconds ahead of Auvergne Elite with Wales sit third.

Day four will see the riders face yet another new course and special tests as the event moves into its final phase.