by Phil Aynsley
in Features, Historic Road Racing, Motorcycle News, Motorcycle Racing
A A
Share on FacebookShare on TwitterShare

It is a measure of just how important the International Island Classic has become when, starting six weeks out from the event, incendiary press releases are already flying along with speculation on social media as to the possible or probable outcome of the event.

“The Australian team will be left breathing our fumes,” is the latest quote from Team GB’s long-standing captain, Keith Higgs.

Well, let’s have a look at the roster and see if we can crystal ball it a little. Team GB will arrive at PI as the defending champions, having won for the last two years. With a roster of “star” riders, backed up by a clinically run and disciplined team, they are entitled to favouritism.

Nothing prepares you better for winning than winning and the British stars have done plenty of that in the last couple of years. On the question of strengths and weaknesses, it seems hard to find any of the latter but very easy to find plenty of the former.

Team boss, the passionate Roger Winfield (who says every year that he probably won’t be coming back but always does) has a proven ability to select the best riders possible to ride his valuable bikes.

The riding list reads like a who’s who of short circuit and pure road racing stars. And don’t be concerned about their age, as some of them are getting along a bit. There’s nothing like a good shot of adrenaline to lift performance and, to a man, every member of Winfield’s team professes a deep love for the Phillip Island layout.

And it doesn’t seem to matter that the list changes a little from year to year. Such is the depth of talent available to him that Winfield is embarrassed with the riches available.

GP veteran, Jeremy McWilliams will be back, and don’t fall for the “scare” story of him not being 100 per cent fit. JMac was knocked off his pushbike while training last week and suffered some slight injuries, but, at age 52, he’s still fitter than a lot of 30 year olds and he will be well and truly fit come the end of January.

Connor Cummins and ex-pat Aussie, Glenn Richards and James Hillier are also in the team and even the changes that have been made to the team have probably only served to maintain its overall strength.

Regular British superbike winner (and winner of this years Macau Grand Prix) David Hickman has been drafted in to replace Ryan Farquhar (still recovering from IoM injuries) and Alex Sinclair and Michael Neeves make up the other “newbies” in the team. Team Captain, Keith Higgs, will have probably the strongest team that Britain has ever nominated.

But the greatest strength of Team GB is that it knows how to win and it knows how to teams race. Teams racing is all about winning if you can and, if you can’t, then it’s riding for placings and stacking up the points.

Because the team is directed from a central point and has a central strategist in control, they are able to change the strategy at a moment’s notice and maximise the team’s effort in each of the four International Challenge races.

There is no team “star” rider, per se and every rider enters each challenge race knowing that their role is to ride so as to maximise the team’s points. Team members do not race each other for individual glory if doing so could adversely affect the overall team position. All of these factors are basic to successfully mounting a team effort.

And it is this overall team strategy that has enabled Team GB to win the IC for the last two years. While most of the races have been won by Aussie riders, much to the joy of the crowd watching from the top of the pit garages, Team GB has racked up points deep into the pack and come away victorious because they understand that the IC is a team’s challenge.

It seems that none of the Australian teams have grasped that concept sufficiently well to be able to prevent a quinella of wins to the visitors.

With that in mind, a small group of Aussie enthusiasts made a detailed submission to the Phillip Island organisers pointing out, in a very diplomatic way, what they believe has been wrong with the way we have gone about racing the IC events.

Some very constructive suggestions were made, all of which were easily able to be implemented and a very favourable response was forthcoming.

It must not be thought that the changes made for 2017 are solely as a result of this submission because PI was plainly thinking about how they could encourage good racing while strengthening the local effort, but there is no doubt that the changes are very much in line with the suggestions made in the submission.

This is unsustainable when you are trying to defeat a cohesive, focused team under close direction and with a single purpose in mind. So there will be some changes to the Australian team for 2017.

Firstly, and most importantly, the team will all be pitted in the one set of garages. Instead of various members of the team being scattered up and down pit lane as they have been in previous years, all of the team will be together and accessible to team management for the whole meeting.

There will be one Team Captain whose job it will be to make the necessary calls so that the team’s effort is maximised. And, because the team will be pitted together, communication about team strategy will be streamlined.

Also, and it might seem trivial, but Australian team members will be encouraged to dress appropriately, wearing their Aussie team uniform when they are not racing and when they are dealing with the public and the media.

The wearing of the uniform is something that encourages team unity and morale and helps mark out the team members as being the people for whom we are cheering from the sidelines.

There are numerous smaller changes that are in the pipeline but all of them are designed to give the team a sense of unity, purpose and focus. They are designed to transform our team of starts into a Star team, as already noted; a team that works together to maximise the team’s result and a team of riders who are riding for the team rather than for individual glory.

This is not going to be easy. As anyone who has had any contact with the IC will know, there are deeply felt divisions between some of the individual Australian teams, tensions and bitternesses even, that go back a long, long way.

It is not the purpose of this article to address these issues, merely to highlight that, if the Aussies wish to repel the invaders, those long-standing issues need to be set aside and the riders and team personnel need to work first and foremost for the good of the Australian team.

It is to be hoped that the goodwill necessary to achieve that end will be found and that the Aussie pit will be a harmonious and happy place to be.

Of course there are many other issues that are peripheral to the event. Long-running issues of eligibility are still festering with as many stories as there are bikes making themselves known over a cup of coffee or a glass of beer.

It is to be hoped that all the teams set these aside also and acknowledge that the technical regulations for the IC are not P5 anymore (they haven’t been for quite a while) and that, as long as everyone is racing similar-spec bikes, that it is the spectacle that matters rather than the strict interpretation of the rules (I can’t believe that I am saying this after all that I have said over the years about “specials). 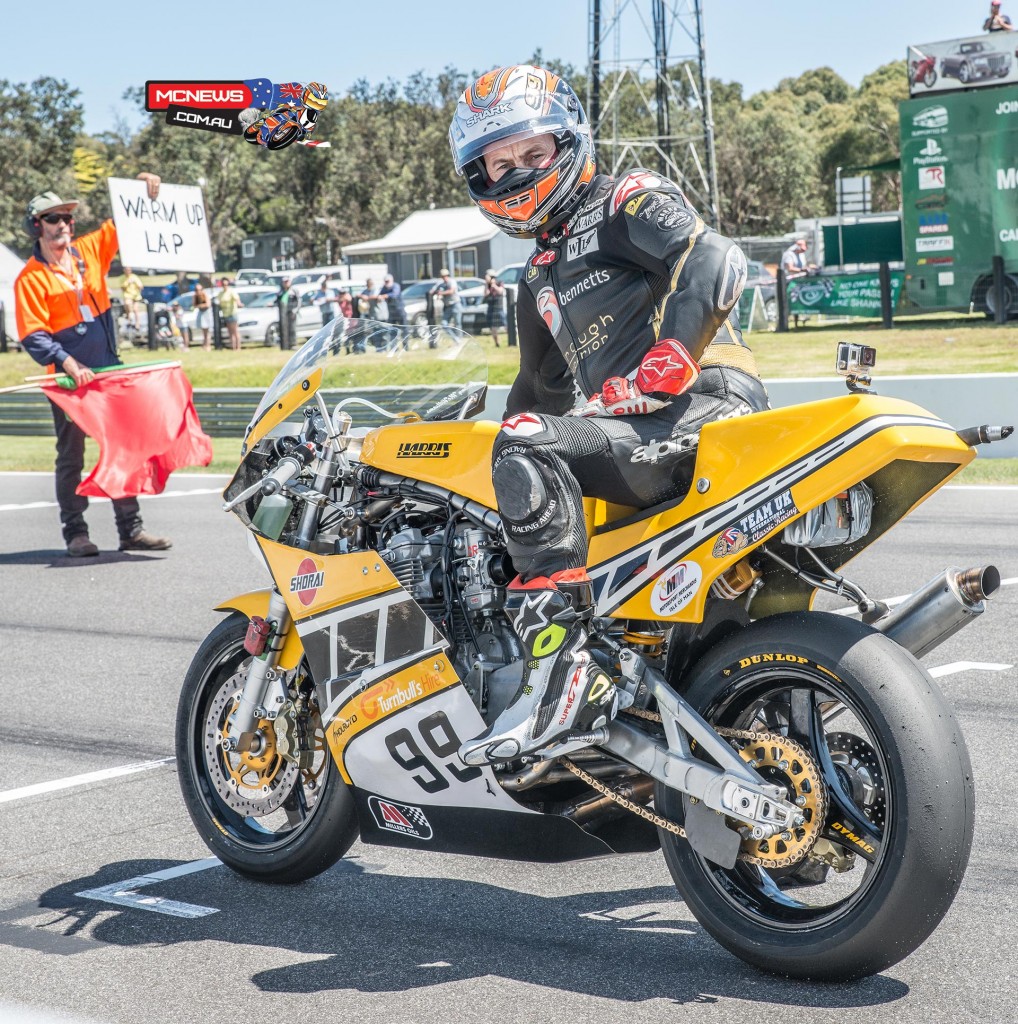 Yes, there are very few places anywhere in the world where IC-spec bikes can race, but as long as they can race here, let’s sit back and enjoy the show.

And, please, before I get deluged with angry comments for existing P5 competitors, I do understand how that the concept of the IC has drifted a long way from its original one as set out by the late Ken Wooton. I do understand that 95% of P5 competitors will not be able to afford to build a competitive bike for the IC.

I do understand that the constantly shifting goal posts have take the event away from those for whom it was originally intended. However, this is the nature of all racing and I see no solution to the problem.

I also understand that the IC is being increasingly seen as somewhat of an “elitist” event where the IC teams get the cream and the rest get the crumbs. But this is also a characteristic of every formula.

Ask any Moto3 competitor how they like being relegated to the pits way out the back while the MotoGp teams get the best of everything. Yes, it’s unfair but life isn’t fair; I’m sorry, but it’s just not.

I am deeply disappointed that sidecar racing at the IC looks like it is going to be a thing of the past. I am sad that increasing numbers of competitors have not entered the event this year as costs in every area of racing continue to rise. As with the above comments, I see no immediate solution to this problem either.

But I hope that the meeting will be a success and I am certain that it will be. Nothing drags in a crowd better than a good, old-fashioned us vs them grudge match and I, for one, will be there to see and to cheer on our Aussie heroes.