Jonny Walker edged out Mario Roman to wrap up his third consecutive Red Bull 111 Megawatt title at the spectacular PGE Coal Mine in Belchatow. The 26-year-old looked in great form during Saturday’s offroad qualification in Poland and followed up with a virtuoso performance on Sunday to make it three in a row at the world’s biggest moto enduro event.

He did not have it all his own way, though, as Spaniard Roman pushed him throughout with the Husqvarna rider following KTM’s Walker home just 10.85 seconds behind after the leader got stuck in rocks late on.

“Getting a third Red Bull Megawatt win feels amazing, it certainly helps put the disappointment of Romaniacs and Erzberg behind me. It was a lot closer at the finish than I wanted, but a win is a win so I’m really pleased I was standing on top of the podium. Generally, things went really well – I lead during the first two laps and felt really comfortable. I had an issue with my rear mousse on the final lap, so I couldn’t push like I wanted to but half way around the final lap I had more than a one-minute lead. I knew I was going to get caught and I got a little nervous right before the finish, but things worked out good in the end. Thankfully I managed to get through the final rock section and across the finish line ahead of Mario. Megawatt’s been good to me in recent years so to get a third win here is awesome.”

Veteran Graham Jarvis dug in gamely for yet another big race podium one minute and 37.93 seconds back from winner Walker with KTM trio Alfredo Gomez, Manuel Lettenbichler and Paul Bolton next up in a field comprising competitors from 26 countries.

“It’s a good effort for me to finish third here at Megawatt. I’m not a sand specialist so to claim a podium result is always pleasing. My start wasn’t too great, maybe about top 10 so I had a bit of work to do on the opening lap to catch up. Once a good racing line came in I was able to pick up my pace and find a good rhythm. Unfortunately, at the end Jonny and Mario were just that little bit too far in front to catch them but I’m happy. With Sea to Sky in two weeks time I’m looking forward to it now.” 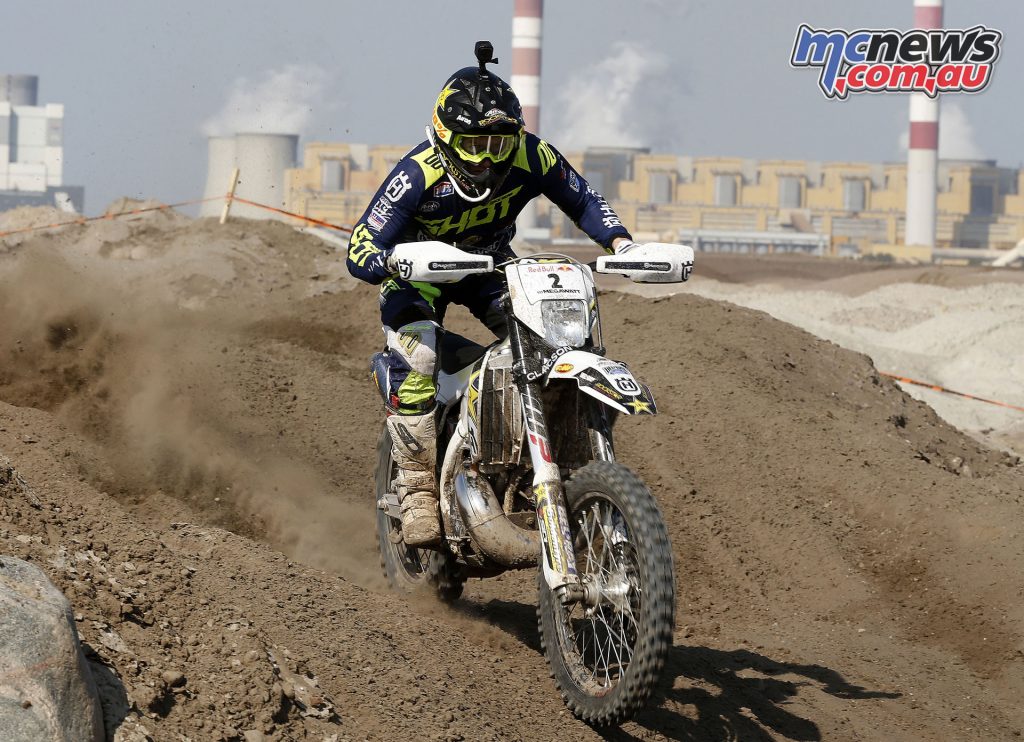 “I was close to the podium, so I am happy. This is my best result here so I can’t be too unhappy just missing the top three. This race is very fast, and together with the sandy conditions it’s not something that I am very familiar with. For me it is a little bit a case of surviving, but to be so close to the podium is very good. I started well, inside the top 10. I didn’t want to take any risks in the beginning. It’s very difficult here to change lines, which makes it difficult to overtake. With the lapped riders things get difficult. It was very strange for me because my luggage got lost coming to the race and I had to borrow all of my riding gear from other competitors. I have to say a big thanks to them, but it was strange.”

Only 30 riders managed to complete Red Bull 111 Megawatt within the time limit of four hours due to the punishing course that included gruelling hill climbs, steep downhill sections and a last straight leading to the finish line featuring gigantic rocks.

Saturday’s prologue for Taddy Blazusiak’s signature event, which he won first time out in 2014, featured an astonishing 1,000 riders with the best 500 making it through to contest Sunday’s final in front of a record-breaking 35,000 spectators.

“I’m very happy that I could stand in front of the participants, push the ‘magic button’ and start the final race. Only a few years back, this event was merely an idea in the heads of a few people, now every year it gets bigger and bigger, and today’s execution was just out of this world. I’m very proud.”

The fourth edition, which counts in the six-part Hard Enduro World Series, featured a longer 90km course that led the riders through new areas of the mine with 150 metres separating the highest and lowest points.

The next event on the hard enduro calendar is the Red Bull Sea to Sky held in Turkey on September 28-30th.