Dean Ferris and Todd Waters round out podium

Words and Images by Marc Jones

Round 2 of the Australian Supercross Series headed south to Bacchus Marsh in Victoria, returning to the club for the first time in many years. Riders were greeted by a technical track that provided a plethora of line choices, as well as a challenge to see who could step it up to take the win.

With a dismal amount of pre-sale tickets sold to the event, there was a fear that the event may have been lackluster and dull. However, fans turned out in droves, filling the outskirts of the track trying to gain the best viewing point for racing.

The pit party had a vibrant atmosphere as fans flocked to the race trucks to grab a signature off their favorite riders. Although there was no seating area, the crowd made use of grassy knolls surrounding the track and laid back ready for a night of intense racing.

In the SX1 class, the battle between defending champion Justin Brayton and back to back Australian Motocross champion Dean Ferris raged on from their last outing at the opening round of the series at Jimboomba. The heat race had the duo paired up together, and the table was set for an exciting night.

Ferris took first blood in the opening heat after taking the lead early in the race and put on a charge to break from the pack. Brayton had a less than impressive start but laid down solid laps to work his way into second and begin the chase on Ferris.

Time was against Brayton, who managed to catch Ferris but not put himself in a position to make a pass. Nearly half a minute behind Todd Waters held onto third ahead of Mega Fuels Kawasaki teammates Nathan Crawford and Daniel Reardon.

The other heat was a tighter affair, with Dylan Long taking the win after Luke Clout made a mistake whilst leading, dropping through the pack into fifth place. Long was followed by Kade Mosig, who was seeking redemption after a first turn crash at Jimboomba ruined his chances of a good finish.

American Nick Schmidt crossed the line in third, finishing his first faultless race after a round to forget last time out.

As the gate dropped in the main event, all eyes were on Brayton and Ferris to see who would grab the all-important holeshot. Although Ferris crossed the line first, Brayton was well placed for the second corner where he was able to make a pass for the lead.

Clean passing meant Ferris was ready to bite back and challenge for the lead but couldn’t make anything stick. Throughout the day, Brayton was able to jump rhythms that other riders were struggling with. In the main event, this proved vital for him, allowing to gap the field and give breathing space between himself and Ferris.

Smooth and consistent laps were the aim of the game, and no one does it better than Brayton. He rode away to a near eight-second lead over Ferris, lighting the candles once again for the race win.

Ferris remained unchallenged in second, and the result kept him within six points of the series lead.

Behind them, the field struggled to navigate the track, with many riders going down hard and dropping positions rapidly. Waters was the next best in line, rounding out the podium ahead of Dylan Long who recorded his best finish in the premier class.

“I’m stoked, this was one of the hardest days of racing for me. Unfortunately I hurt my knee during the week, I came in after qualifying and I was beside myself. Basically I was just over riding injured, but dad said to just go out there and ride my laps, and that’s really what I did. With the result, for what the day was, I’m stoked, but I’m not really impressed with my riding overall. But we’ll go back, get make sure we’re healthy and I’m looking forward to round three in Adelaide now where we can go in with a good position in the championship.”

Daniel Reardon salvaged points in fifth to keep him with distance of the title, while Schmidt found his groove to give his team the result they’re after finishing in sixth.

Unfortunately a pair of crashes would see Luke Clout fall out of the top spot in his heat race and out of podium contention in the 20-lap main event, where he would eventually cross the line in seventh and now sits tied for fifth in the standings. 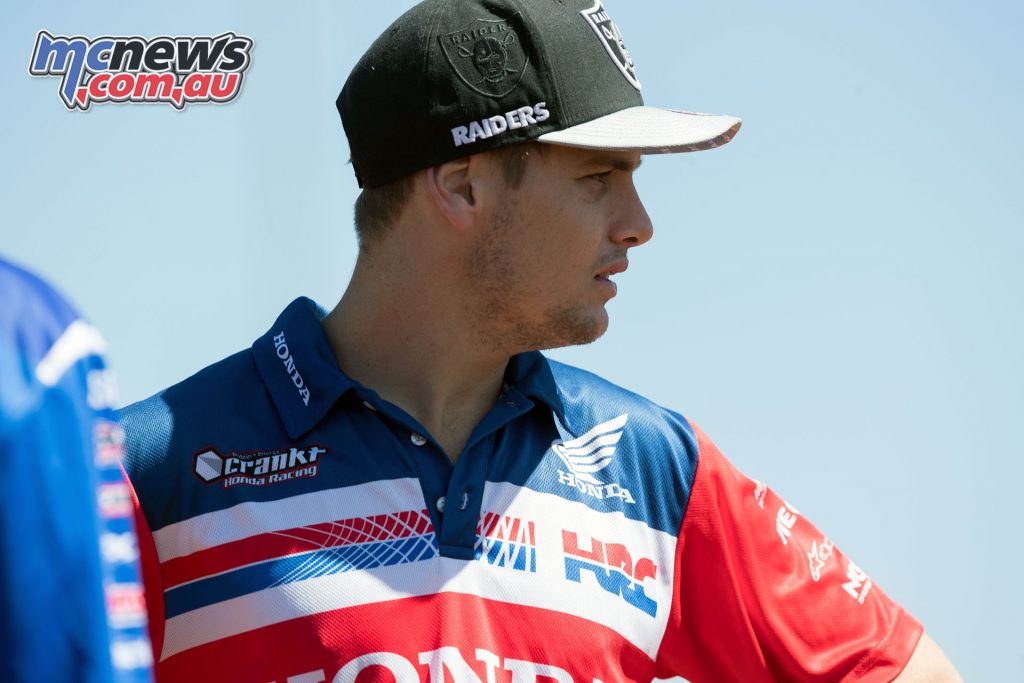 “We had a really good day going and I was second fastest. We had some really good speed going and I was second behind Justin [Brayton] in qualifying. I was leading my heat race and that was really good to get out front, but I went down in the whoops and we finished fifth in that one. In the main event I got a good start and I was running in third before I put it down again. I think my speed and everything is there, but we’ve just got to fine-tune some little things and I think we’ll be on the podium in the coming rounds.”

At the start of the day, you couldn’t predict to drama that would unfold throughout the event in the SX2 class. It all began in the heat races, with former champion Gavin Faith going over the bars in a rhythm section while leading his heat.

The American for forced to retire from the race, opening up the door for defending champion Jackson Richardson to inherit the lead, and eventually the heat win. Aaron Tanti showed his pace once again finishing in second, ahead of Geran Stapleton.

The second heat went a lot smoother for points leader Hayden Mellross. After taking the holeshot, it was a case of catch me if you can. No one could match his pace, leaving Mellross to take the chequered flag unchallenged and secure the top gate pick for the main.

Kyle Webster continued his strong form finishing in second ahead of Mitch Evans. The heat provided action behind the leader, with notable riders Dylan Wills and Wilson Todd both going down and being sent to the LCQ along with Gavin Faith.

With only four spots left tensions were high among the field, as this was their last chance to qualify for the main event.

The LCQ however, went smoothly for Faith, Todd, and Wills, who took the top three spots in the race. Morgan Fogarty claimed the last spot, holding off a fast-finishing James Brown.

The stage was set, and the crowd sensed that the action was far from over. Hayden Mellross jumped out of the gates, quickest to lead the field into the first corner. Although having a near last gate pick, Gavin Faith managed to find his way into second place early, ahead of Jackson Richardson.

Mellross laid down a charge early, pulling away from Faith and looked unstoppable out front. Just as the race seemed to be wrapped up, Mellross tucked the front end at the end of a rhythm section sending him over the bars and out of the race. The crowd was in awe as Faith rode on back to take the lead with no effort required.

But Faith also had Richardson breathing down his neck behind him. As the laps ticked away, Faith was unable to be caught and took his first win of the year, also taking home the red plate. Richardson made up valuable points in the series finishing second, with Wilson Todd riding his way onto the podium after coming through the LCQ.

Dylan Wills, who also came through the LCQ finished in fourth, ahead of Jay Wilson who’s return to racing in Australia continues to be a successful one.

The series now takes a weekend off before returning to Virginia, north of Adelaide on October 28.

Todd Waters on the Husqvarna 701 Supermoto