When I first rode KTM’s 950 Supermoto model early last year I was most impressed, and judged it as the most practical all round roadbike yet to come from the Austrian manufacturer. An excellent fuel range and ergonomics that proved friendly enough to see me cover 2000 kilometres in a little over 24 hours made a mockery of the ‘Supermoto’ model tag that suggested the bike would be uncomfortable and impractical.

Predictably enough the R model is slightly more spartan, boasts sexier rims and livelier war paint. It is also seven kilograms lighter than the T thanks to forged, rather than cast, Marchesini’s and less bodywork.

The T still gets the same 115 horsepower v-twin, fully adjustable WP suspension and radial mounted Brembo brakes. So there has been no serious detuning of the engine or the running gear but the same full monty KTM 990 experience as the R.

The T does gain the extra benefits of better wind and weather protection thanks to a frame mounted front cowling and screen, handguards, a better seat that includes reasonable pillion accommodations, mounts for saddlebags integrated into the muffler heatshields, a luggage rack with passenger grab handles, a slightly lower seat height and four more litres of fuel in the tank.

Effectively, the 990 Supermoto T has improved what was already KTM’s best real world roadbike, the 950 Supermoto, into a more powerful, more comfortable and more highly equipped mount than before. Now, that’s what I call progress!

My run home from KTM’s Sydney office to Melbourne’s northern outskirts took in some of Australia’s best roads.

After the boring highway drone down to Canberra to make myself at home on the KTM I then covered the fantastic ribbons of blacktop (and a little dirt) between Tharwa, Adaminaby, Kiandra, Tintaldra, Walwa, Granya, Mt. Beauty, Bright, Whitfield, through to Mansfield and then a bit of dirt between Bonnie Doon and Eildon before the final very wet run home to Melbourne. All up, around 1000 kilometres of fantastic roads, in all manner of challenging conditions, to appreciate what is a very fine motorcycle.

The KTM 990 SMT performed flawlessly throughout the journey and was a more than willing partner for any of my more adventurous shenanigans.

With a generous 180mm of rear suspension stroke matched to 160mm of fork travel the WP gear shrugged off any bump. The ride is always comfortable and the KTM simply floats along any manner of road with no hint of a kidney punch to the rider, no matter what’s thrown at it. Even reasonable sojourns off road are well within the 990 SMT’s capabilities…. 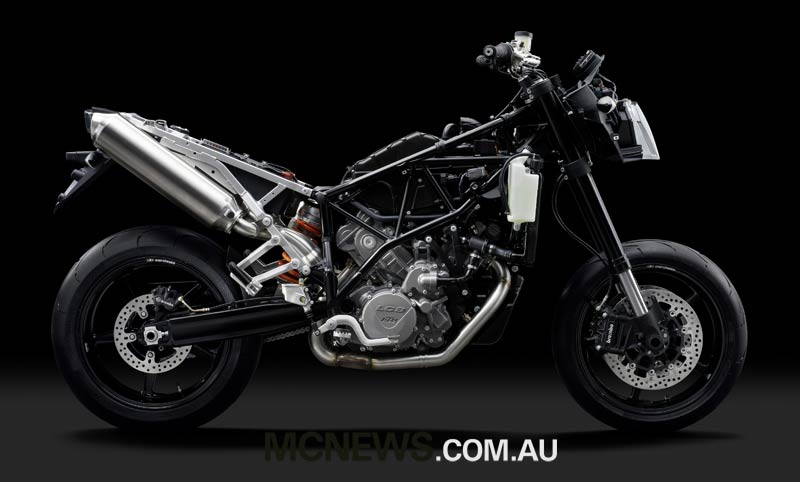 When exiting corners the long spring travel at the rear feels excessive before the shock gets it under control. Likewise at the other end, the forks struggle to cope with the awesome bite of the four-piston Brembos.

Understandably, with such long travel suspenders, there are always going to be some compromises and on standard settings that shows as a fair bit of fore and aft pitching when riding aggressively. However, the 990 SMT always regains its composure and overall really does straddle the boundary between sporting and sumptuous touring on standard settings remarkably well.

The 990 SMT certainly has more emphasis on sumptuous than hard core sporting though and thanks to the full gamut of suspension adjustments at our disposal we will spend some time honing the SMT’s sporting edge.

If you really crave a scalpel then you would be better off with the more powerful and razor sharp 990 Superduke R. But in everything bar hard core scratching the SMT is clearly the better all round mount and is certainly no slouch when the bends arrive. On public roads the difference in performance is negligible.

The charismatic and quite unique 75-degree v-twin engine sounds raucous while delivering the goods. A wonderful mid-range makes picking up the front wheel child’s play and the torque follows through to a willing top end. KTM claim 115hp @ 9000rpm and 97 Nm @ 7000rpm which emphasises how much this twin enjoys a good rev.

Like all KTM twins the engine picks up revs quickly and is always eager for more throttle. A punchy mid-range combined with the long travel of the suspension makes the 990 STM a wheelie hound. A tug on the bars out of second gear corners sees the front rise gracefully, you can do it in third too if you are eager enough, and that’s without the clutch.

The engine is smoothest when turning above 4000rpm. Below that mark the fuel injection can’t quite match the crispness of its carburetted predecessor. That bike though was painful when cold, but the EFI of the new bike takes care of all the cold starting kerfuffle.

First gear runs to 75km/h and 100km/h in top gear has the mill turning just under 4000rpm. The gearbox shifts sweetly enough and the clutch is light and progressive.

On the highway the 990 SMT can stretch more than 300km from its 19 litre tank but aggressive throttle use will see that range pegged back to around 250km. Annoyingly there is no fuel gauge but a light illuminates on the dash to alert you to the fact that you have just over 3.5 litres remaining and a new ‘F’ tripmeter is then displayed on the LCD.

The 990 SMT is staying with us for some time yet and as our relationship grows we will learn how to get the best from the KTM and pass on our findings in due course.

As it is, KTM’s 990 SMT is one of the most well rounded roadbike packages ever to go on sale. By the time we are finished with it I am sure it will be an epic back road brawler with nearly all the creature comforts of a full dress tourer! Supermoto indeed…..

First we will spend some time dialling in the suspension before examining the luggage options and adding a bit more bite with the optional Akrapovic mufflers. I am already growing immensely fond of this bike, so much so that I am already dreading having to eventually give it back… 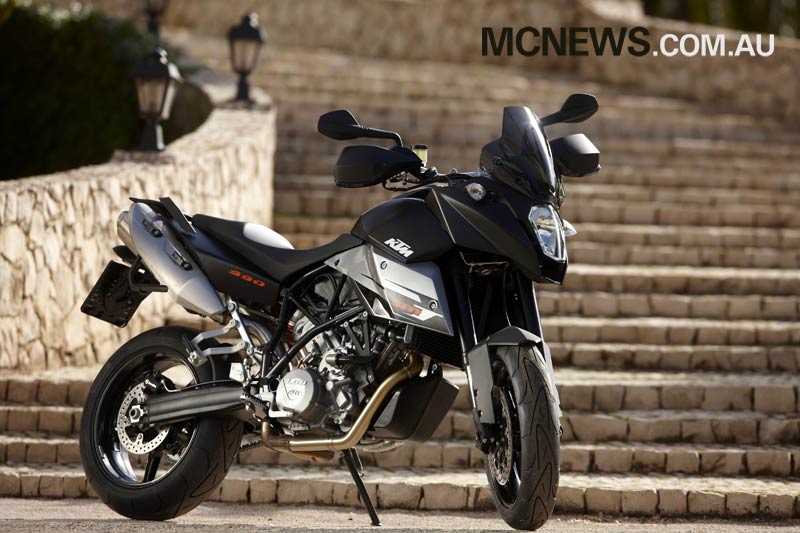 The Boris brief from a breathtaking Spanish GP