Allegations of financial impropriety were made against me personally during the Spanish Grand Prix weekend in Jerez. These allegations were made not directly, but via the press.

Since these allegations were made against me in my role of Team Principal of the Marc VDS Racing Team, I rejected the allegations unreservedly and vowed to defend against them robustly.

That remains my clear position. For this matter to be resolved at the earliest opportunity, I have made repeated requests through my legal representatives for evidence to be provided in relation to the unfounded allegations.

I would also like to make it clear that Mr van der Straten and his legal team have confirmed that there has been no termination of contract. Finally, they have made no communication informing me that I am no longer responsible for managing the Marc VDS Racing Team as Team Principal in future.

I offered several options as to how this issue might be resolved, but no solution at all was presented by Mr Marc van der Straten. I received a request for a meeting on Monday May 14 at 1530 CET in Geneva, Switzerland, which I confirmed that I would attend. At 1830 CET on Friday May 11 that meeting was cancelled without any content-related explanation and with no indication that the meeting would be rescheduled.

For me, this action can only be interpreted in one way; that all such allegations are off the table now. I will therefore be attending this weekend’s French MotoGP™ round in Le Mans to continue as Team Principal of the Marc VDS Racing Team, with all my dedication for the team.

I would also like to take this opportunity to personally thank those, both inside and out of the paddock, who did not hesitate to support me in the face of these unsubstantiated allegations. Most importantly, I also want to thank my family, who have suffered more than most from these unfounded accusations. 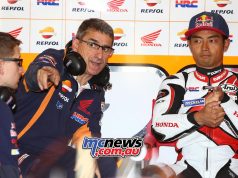