Riders rev up in Qatar | Rossi with Yamaha until 2020

Talk centered on the new season, debriefing testing and contract renewals – with Marquez signed up for another two seasons at Honda last week, and Rossi announcing during Thursday afternoon that he will race on to the end of 2020; making it an incredible 25 years overall.

The best soundbite from the ‘Doctor’ on that raised a laugh, with the rider from Tavullia explaining his decision with a smile: “I’ve seen a lot of drivers and riders retire at the top, like Schumacher, Biaggi, Bayliss…but then they always come back. So I decided to race on until the end!” 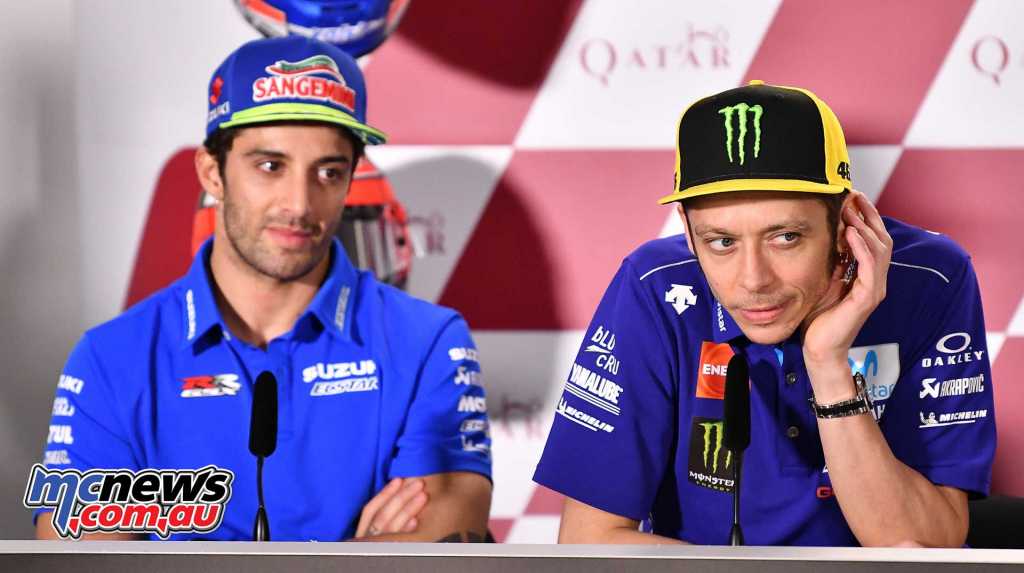 Back on testing and focusing on the race weekend ahead, morale was high ahead of the season opener and everyone is eager to get going, including the man now beginning the fight for his seventh crown.

“I’m happy to be here to start the season after a long winter, I think everyone is ready to start,” smiles Marquez. “We started more or less in the best way, with my future already decided. We agreed, I was happy with them and I was waiting a bit to see how preseason started but then I felt happy, and I feel important inside Honda. That’s important. So I’m happy and really grateful to them. It will help a bit this season because everything is sorted. In testing, we concentrated a lot on the engine, then throughout the season I think we can improve other things more. We start better than last year, we’ll see but we know there are some tracks where we’ll be able to attack and some more difficult.”

One of the more difficult could prove Losail – and it may be well ‘DesmoDovi’ holding the advantage as competition starts in the desert, with the Italian already having taken some impressive podiums at the venue.

“When I finish the season in a good way, the winter is wonderful,” begins Dovizioso, who fought for the title last year down to the wire. “It was a nice winter. I expect to be even more competitive this year, we’ve worked well over winter and we had a lot of new material to test. I think we tested it all well but only races can show that reality so we’ll have to see. In the race here, but especially in the races after.”

So Qatar may not reveal everyone’s hand – but one ace Dovizioso is sure he’s holding is the ability to fight at the front once again.

“In the past, when you race for a factory team, the Championship is the goal,” explains the Ducati rider on his chances of fighting for the title. “But you also have to be realistic. In the past it wasn’t real like this, this year I think we have the right situation. We have everything from my side, and from the bike side. It doesn’t mean we will fight for the Championship, but the approach is like this.”

The winner last year, meanwhile, was Maverick Viñales – and the Movistar Yamaha rider hasn’t had the same run in preseason this season, but his confidence remains high.

“I feel great, this year I feel really good,” affirms the rider from Roses. “Sometimes on the bike we’ve not been at the best level because we were testing many things, but I’m confident we can do things. We know where we have to improve but like last year, I start with good motivation and I feel good on the bike.”

When pressed more on what they’re working on improving, the Spaniard simple says it’s a matter of lots of little improvements. “During the season, you have to improve everything. You have to improve little by little, and race by race.”

The next man to talk – undoubtedly the talk of the day following his new two-year deal – was Rossi. Talking through the process and his thoughts, the ‘Doctor’ also added some big positives after preseason – saying he feels fast.

“I’m happy,” smiles Rossi. “Two years ago when I signed the this contract, I thought maybe it would be the last. I thought I would decide during these two seasons but in my mind it was always very clear, and I want to try and continue. The challenge is very high, to stay at the top it’s always difficult but I think I have enough strength and motivation to try! At the end of last season, I spoke with Yamaha and I said I would decide during the winter tests. If I was able to survive them, I would decide! The tests were quite good and everyone is very close, some days we suffered but I like the bike, I feel comfortable and quite fast. We have work to do but I feel quite fast.”

Fast was a word apt for Johann Zarco, too. The 2017 Rookie of the Year and top Independent Team rider topped the test at Losail, and the first question was a big one. Did he think people would be mentioning his name as a contender for the crown?

“No, I didn’t expect to be a title candidate,” smiles the Frenchman. “Leading the race last year gave me great confidence and the way I finished the season was good to understand a lot of things with the top guys. And after the three tests I was so happy to lead the classification. It’ only one laptime but it makes me and the team smile and makes me want to repeat it.”

Andrew Iannone was another of those who fought at the front last season in Qatar, and sadly also crashed out. But that pace is a constant for the ‘Maniac’ at Losail, and this preseason has seen some big improvements.

““The first part if 2017 was very difficult but at the end we recovered the gap and we were closer to the top,” says Iannone. “We continued to work very hard for the future and for the test. I think this year we’re starting in better conditions and from the beginning the bike has been a better base. During the tests the bike has been strong. I think specially here, the feeling with the bike is really good for me, but in any case, everybody is very close but we’ll try our best. I don’t know what it is about here. When the feeling with the bike is good, I’m generally fast. But I always try my best and Qatar is a good track for me.”

So many contenders for the crown, the first 25 points and glory in the desert make mouthwatering reading ahead of the season opener. The lights go out for the opening race of MotoGP 2018 at 0300 Monday morning, Australian Eastern Daylight Savings Time. See the full schedule below in AEST.