The British Grand Prix is held on the longest and one of the fastest tracks on the calendar, the 18-corner layout over 5,900m is a true test for riders and manufacturers and one that will see tyres and machines pushed to the limit.

The fast, flowing and technical nature of the layout through such famous turns as Woodcote, Luffield, Copse and Stowe make this a track that riders enjoy because they can use the full potential of their bikes.

Michelin rear tyre range will feature soft, medium and hard compound tyres for both the front and rear, with the front soft and all the rears having an asymmetrical design to cope with the 10-right-hand turns and 8-left. The right-side of the tyre will be a harder compound, with the softer shoulder on the left designed to warm-up quicker and give the riders the feel and confidence to put the power down on to the asphalt.

Silverstone is based in the rolling countryside of Northamptonshire in the heart of England. It is situated approximately 125km from the country’s capital London. Originally constructed as an air-base, Silverstone has been a motorsport venue for more than 60-years and in 1977 staged the first British motorcycle Grand Prix to be held on the mainland – previous to that it had been on the Isle of Man.

The MotoGP championship returned to Silverstone in 2010 – after a 23-year break – and the track has been the home of the event since then. Its location makes it one of the most northerly races of the season – only Assen is further up the globe – and this position and the time of the year the race is staged, means that wet weather is always a threat.

First to speak was reigning Champion – and Championship leader – Marc Marquez, who first debriefed Spielberg before talking Silverstone: a difficult but good track for the rider from Cervera.

“Austria was a great race and I was at home on the sofa watching it again and it was really nice to watch! Dovi was really fast there, he had a bit more than me but we tried until the end and I was very happy to take 20 points there. But now we’re at Silverstone, and we had a good test at Misano before. Last year I was close to the podium so the target is to stay consistent and try and get on the podium. Weather is always a question mark here! This is one of the most difficult circuits on the calendar, it’s demanding physically, difficult to warm the tyres…but I felt good since I came here with a MotoGP bike in 2013. I know here can be a weekend where Maverick will be strong but I’ll try and work hard in the garage and get ready for the race on Sunday.” 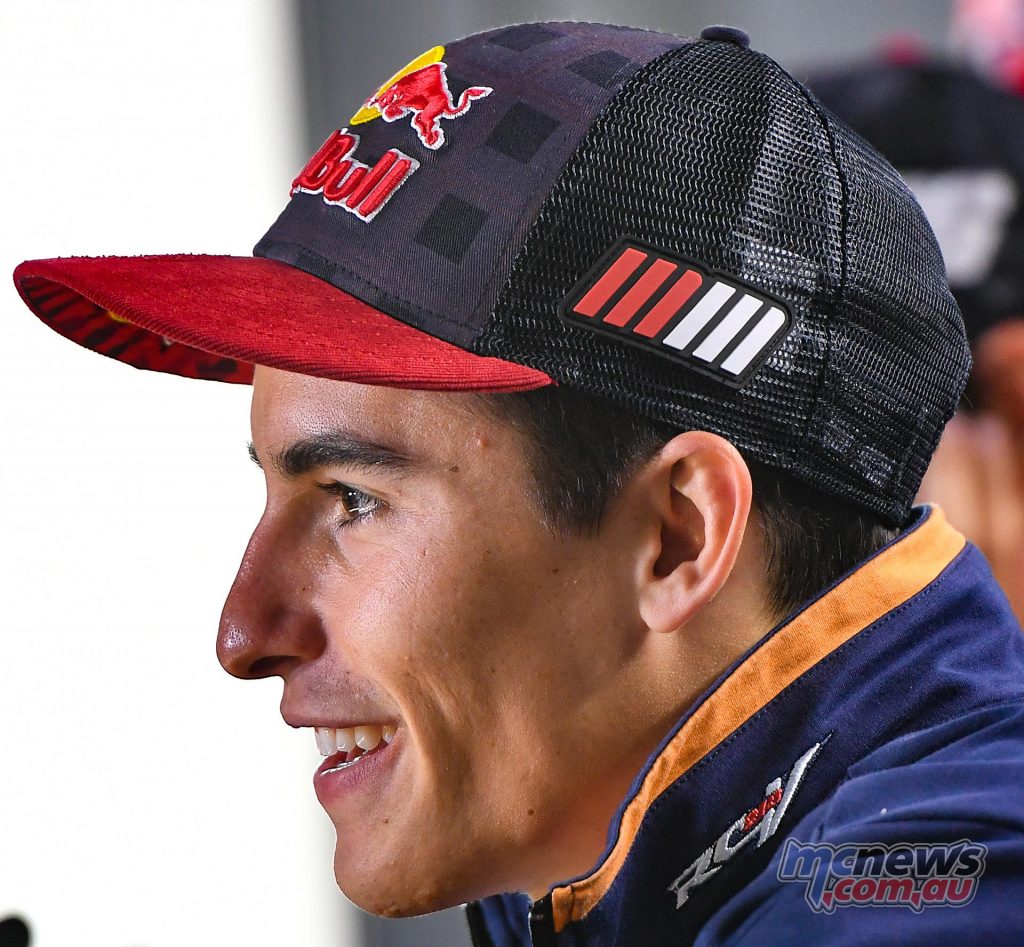 Andrea Dovizioso, who moved up to second in the standings after his stunning Austrian GP win, agreed it’s a tough circuit – but says he thinks it’s a great venue.

“It’s a wonderful track. It’s very long, difficult, a lot of lines and bumps…and the English weather! But it’s really nice to ride in MotoGP. Last year was a strange race but I think this year it will be different; I think we are more competitive. But let’s see, we’re going into the race very relaxed. I hope it can be as close as Austria again – when I watched it again at home I was more nervous then! But I think this weekend there will be more riders who can be fast. It’s a different story every weekend and we’ll have to see, but it looks like we’ll have good weather and there will be time to work with the bike.” 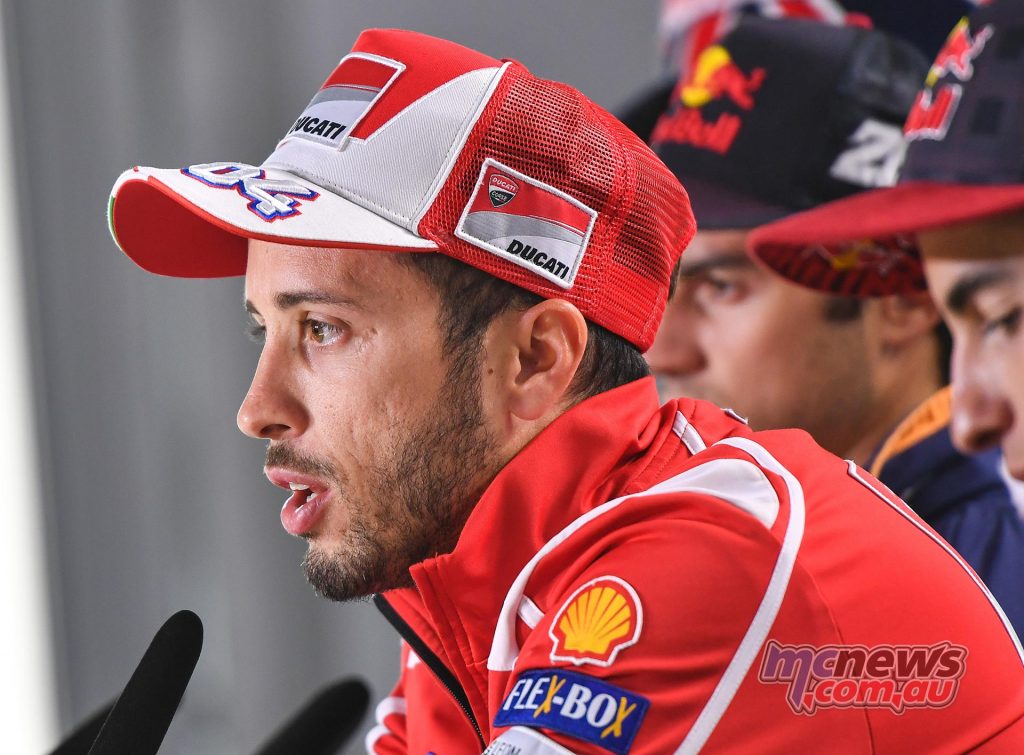 Next up it was Maverick Viñales, who won the race last year, and has some extra-special memories of the track.

“It’s always really nice to come here, with great memories in the smaller categories and last year. It’s really important to start pushing 100% here and giving the maximum. Friday, especially FP2, will be very important to decide which direction to take with the tyres. It’s tough now but that only makes us stronger, and when good times come we’ll make the most of them. And it was great to do the test in Misano before coming to Silverstone.” 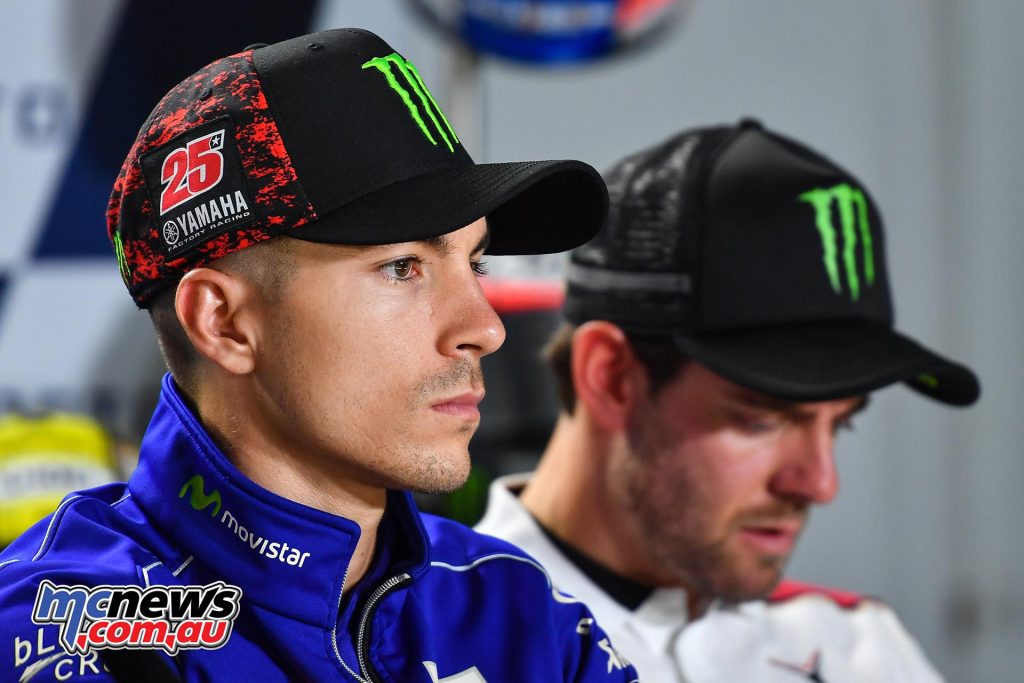 Key rival Dani Pedrosa agreed on the need to maximise track time – and is also raring to get out the blocks and down to work.

“The last two races were quite good for me. We’ve been working a lot since the last test, so hopefully we can maintain the same level. We were testing a few days ago and the level is good. We’ll work from FP1, at this track it’s important to get laps because we don’t come here often. It’s long, wide and you need to learn the bumps. You need to get feeling with the track. Everything from FP1 will be important, qualifying is obviously an important point, the start…but we need to focus to try the tyres and understand which is best for the whole race and which for the laptime. More settings and laps are always useful.” 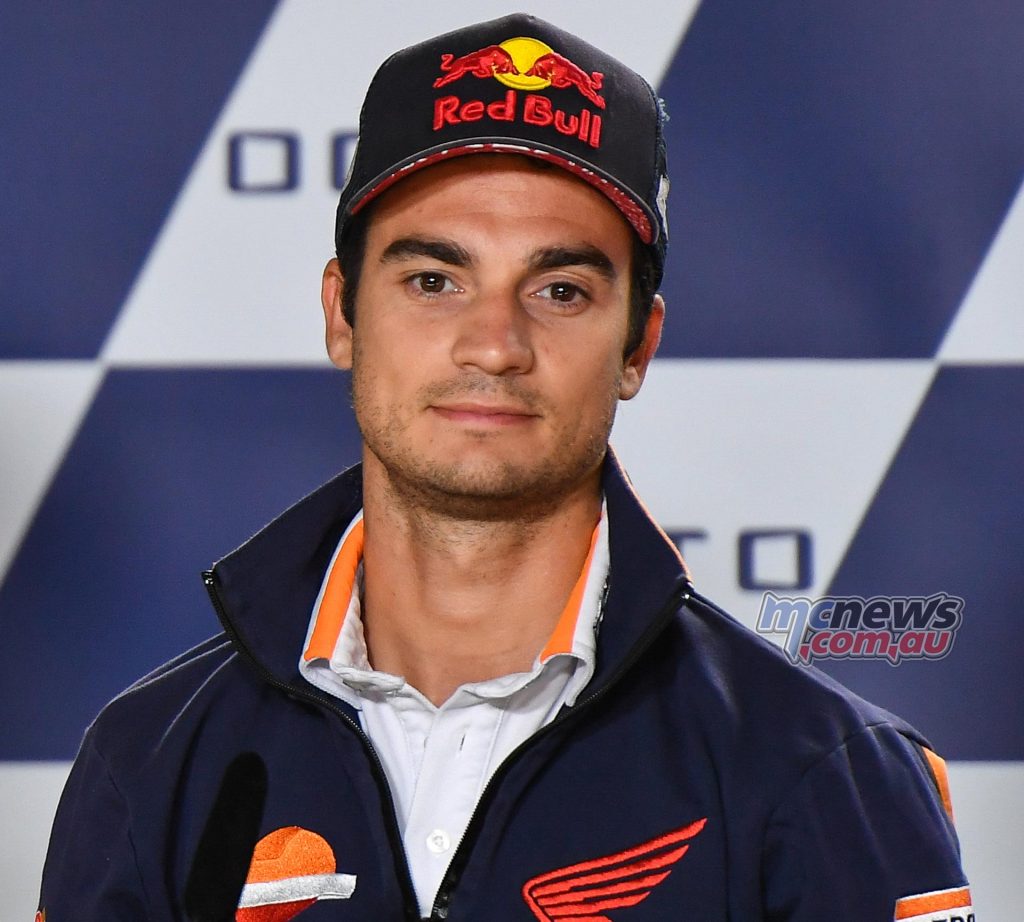 Then, of course, it being the British GP meant the UK was well-represented in the Press Conference, with last year’s polesitter and podium finisher Cal Crutchlow the next man to talk. He expects a tough challenge this season, but is looking forward to putting on a show for the crowd.

“I always look forward to coming back to Silverstone, putting on the best show for MotoGP and for all the fans who turn up. Having Brits in all three categories is always good to give fans something to cheer about, and hopefully we can be up there too. I’ve had some good results here over my career but it’s not a circuit I like a lot – it’s bumpy, and I think I’d have to be very lucky on Sunday to overhaul these guys here. I think it will be a lot faster than last year but I look forward to being in the mix again and we’ll see what we can do.” 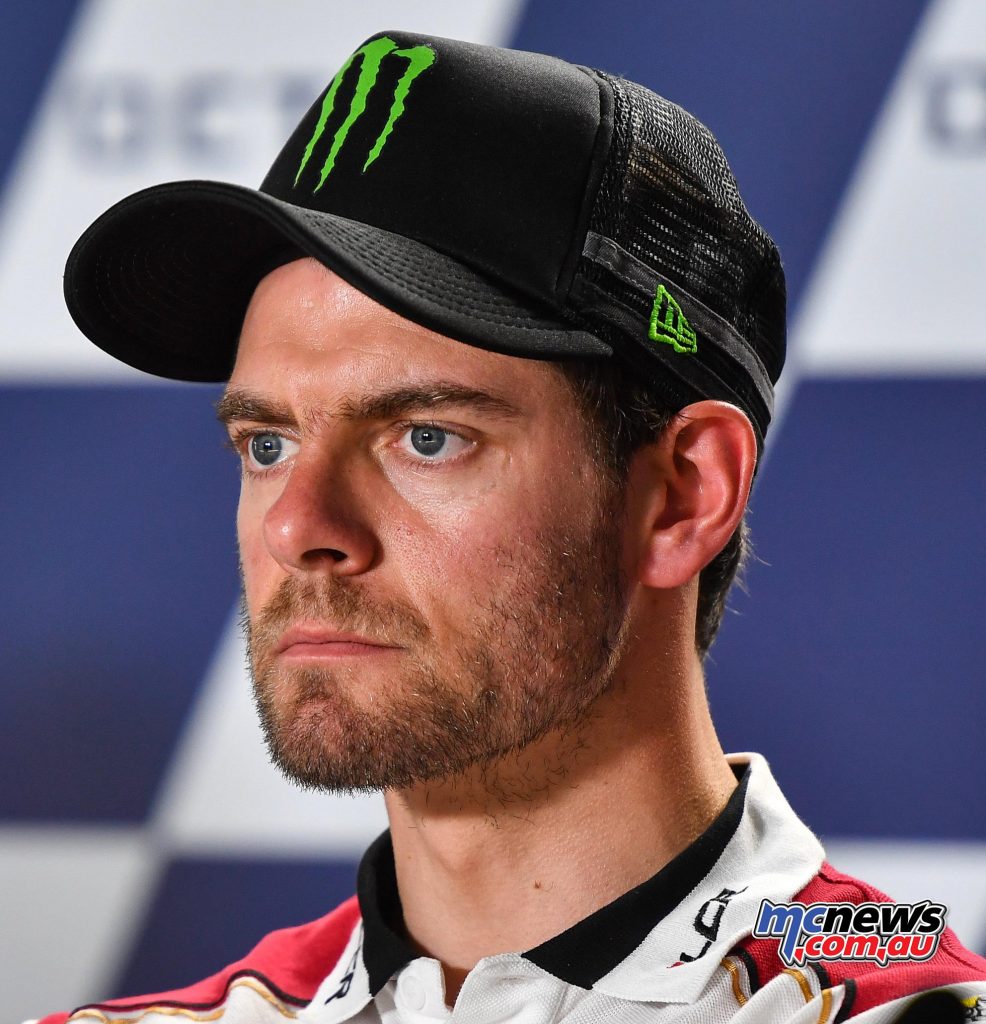 Compatriot Scott Redding also agrees it’s a great weekend for the home riders – and that track time is vital.

“I always like to come back here to my home GP. I look forward to the weekend! From the first time out if the temperature comes up a bit or it rains…we have to use as much track time as we can. That’s the plan, just try and get everything dialed in and do the best we can, like always. It’s been a tough year but it kind of doesn’t show, I’ve put myself in good positions, we’ve struggled in some races but now we’ve been working differently – and I think that can help me in the next races.” 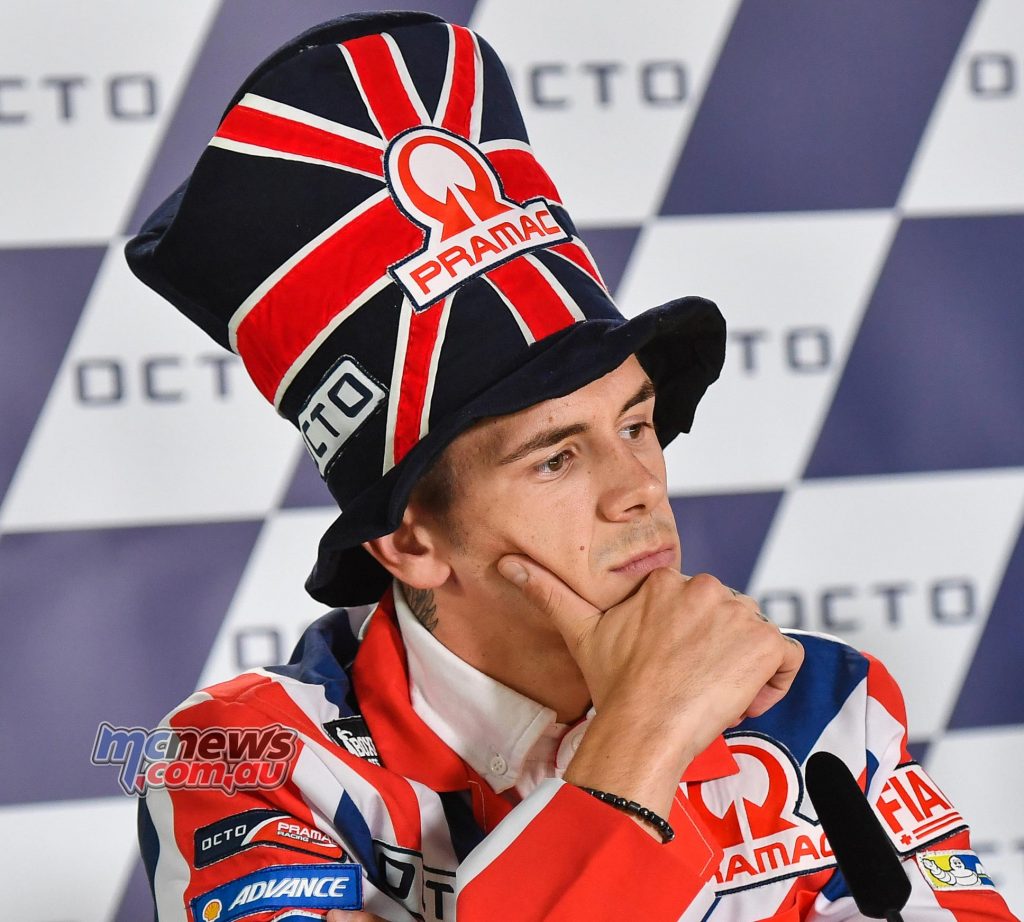 Finally, after announcing his move to MotoGP with EG 0,0 Marc VDS next year, Tom Lüthi joined the Press Conference; full of excitement about moving up, but ready to fight the Championship fight in the intermediate class until the end of the year – against future premier class teammate Franco Morbidelli.

“It’s great to sit here and next to all these guys, it’s like a dream come true. It’s amazing for me and I want to thank the team for giving me this chance! Now everything is fixed, the future is clear and I think it’s important to get it out my head again and focus on Moto2. Morbidelli isn’t unbeatable, so we have to keep it up, try and be in front for Valencia and the last race… and then start a new story!”

Valentino Rossi was not present at the pre-event press conference but still aired his thoughts via PR and reflected on the team’s recent test at Misano.

“We go to Silverstone after a day of testing in Misano and I want to go back on track immediately to find out if we have been able to find positive solutions to improve our bike. Silverstone is a very fun and beautiful track but also very demanding. This track is very long and there are so many changes of direction at high speed. It’s important to find a perfect set-up of the bike, in braking and in the fast corners. It’s a really nice track for me and for my riding style. I want to do a good weekend and fight for the podium.” 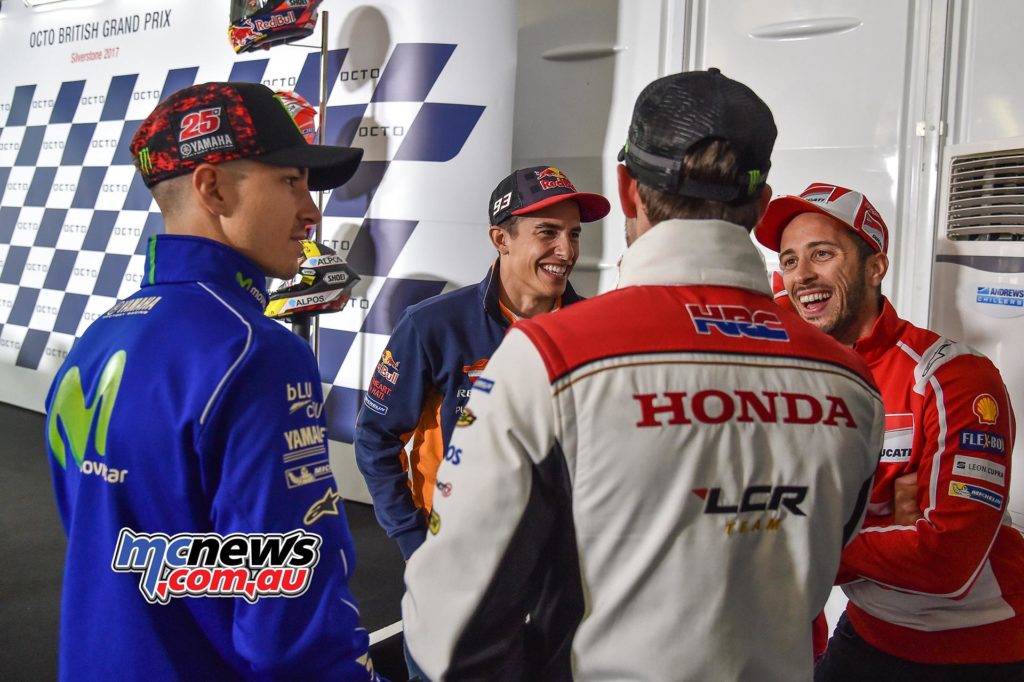 Jorge Lorenzo had left the press conference talking to his teammate Andrea Dovizioso, but also put out his thoughts on the Silverstone event. Both Ducati riders recently completed a day’s testing at Misano where they notched up a lot of laps (102 for Dovizioso and 92 for Lorenzo) on a hot sunny day, and set some positive times on their Desmosedici GP machines.  Jorge Lorenzo is currently seventh in the championship chase with 79-points and is the current rider with the most victories at Silverstone, with a total of 3 wins (2010, 2012 and 2013), matched by Kenny Roberts (1978, 1979 and 1983) in the all-time ranking at the British circuit.

“The last two races at Brno and in Austria have boosted my confidence because we improved in many areas and so the aim for Silverstone is to continue this positive trend and get amongst the front-runners right from first practice on Friday. I really like this track, despite the bumps in the surface we have found in the last few years. One of the key factors for the race will be the weather, which is always pretty unstable in England, but our bike has proved to be competitive both in the wet and the dry. Tuesday’s test at Misano was positive and confirmed that we are working in the right direction: I did almost 100 laps and I am now riding my Desmosedici more naturally.”

Silverstone is sure to write a new story in the tale of the incredible 2017 Championship, with track action beginning on Friday – and five riders still very much in contention for the title when the lights go out at 0030 Monday morning (AEST).