Today will see the much-awaited opening MotoGP™ test of 2014 as the field gathers in Malaysia. For the first time this year, Factory and Open machines will share the track as riders and personnel get to grips with new teams.

Following on from the post-Valencia Grand Prix test in November that saw new bikes break cover for the first time, 2014 testing now begins in earnest with the traditional early-year trip to the Sepang International Circuit on the outskirts of Kuala Lumpur.

Key terms this season are ‘Factory’ and ‘Open’, with the CRT label having now disappeared from the sport. Furthermore, the first Sepang gathering will mark one of only two occasions on which all teams and riders are able to share a race track for testing this pre-season, as the March Tyre Test at Phillip Island in Australia will feature only the official riders of the factory teams, with those in question then not taking part in the following test at the Losail International Circuit in Qatar.

At Sepang this week, Marc Marquez will continue development with Repsol Honda Team as he retains the number 93 plate, having elected not to take on the World Champion’s privilege of running number 1. On the other side of the garage, Dani Pedrosa will continue to adapt to no longer working directly with long-term mentor Alberto Puig. There are also staff changes for Valentino Rossi, as he resumes work with new Crew Chief Silvano Galbusera who replaces Jeremy Burgess.

For Ducati Team, 2014 is the start of a new era. Andrea Dovizioso reunites with former Monster Yamaha Tech3 team-mate Cal Crutchlow, as ex Aprilia guru Gigi Dall’Igna joins the outfit for what is hoped to be a dramatic turnaround in fortune over the next few seasons. The Italian, now in the role of General Manager for Ducati Corse, aims to start by improving communication between team members working at the circuits and those back at base in Bologna, Italy. Boosting the line-up for this test, Ducati Test Team rider Michele Pirro will also be in action at Sepang, as well as Yamaha Factory Test Team’s Katsuyuki Nakasuga and Wataru Yoshikawa plus HRC Test Team representative Kosuke Akiyoshi.

The satellite riders take on new challenges as well. LCR Honda MotoGP’s Stefan Bradl returns to Sepang for the first time since breaking his ankle during last year’s race meeting, while Tech3 field reigning Moto2™ World Champion Pol Espargaro – younger brother of Aleix – alongside Bradley Smith. Preparation for the test has been slightly disrupted for the French outfit, which two weeks ago suffered an untimely flood in its Bormes-les-Mimosas base. The satellites are completed by Alvaro Bautista with GO&FUN Honda Gresini and the Pramac Racing Ducati of Andrea Iannone. Both Gresini and Pramac have split their development, however, as second riders Scott Redding and Yonny Hernandez will race Open equipment. At the time same, Gresini is the only team on the grid to be competing with Showa suspension and Nissin brakes on both of its bikes.

For the first time ever, all bikes in the premier class are now running the Dorna-supplied electronic control unit (ECU) as part of the continued initiative to lower running costs in MotoGP™. Yet there are numerous subtle differences between Factory and Open specification bikes. The Open machines must also use the spec software supplied with the ECU by Italian firm Magneti Marelli, whereas Factory entrants are able to make use of their own programs. However, Open riders will be able to enjoy 12 engines per season, contrasting with the five powerplants of Factory bikes which are frozen in development and may not be modified during the season; with this in mind, engine management now becomes more critical than ever before. On top of this, Factories are constricted to running 20 litres of fuel across a race distance (one less than last year), while there are 24 for the Open riders.

Other exciting additions to the grid include four brand-new Honda RCV1000R customer bikes, to be ridden by Gresini’s Redding, Cardion AB Motoracing’s Karel Abraham and the Drive M7 Aspar Team pairing of Hiroshi Aoyama and 2006 World Champion Nicky Hayden, who is competing on a Honda motorcycle for the first time in over five years. NGM Mobile Forward racing is running an FTR-Yamaha package including a lease engine deal; with this, the outfit will have five Yamaha engines per rider across the season (three new units and two rebuilds). Within the team, Colin Edwards is joined by Aleix Espargaro.

A total of five rookies are on this year’s grid, with former Moto2™ rivals Pol Espargaro and Redding accompanied by Britain’s Leon Camier (British Supersport and British Superbike title winner of 2005 and 2009, respectively) with IodaRacing Project, although the team is not testing this week. Australian Broc Parkes has signed up with PBM – with the team this year racing two own-built bikes for the first time – while France’s Mike di Meglio returns from an injury-affected 2013 to make his premier class debut with Avintia Racing.

The first Official MotoGP™ Test of 2014 will run between Tuesday and Thursday, with the Sepang track open between 10am and 6pm local time (GMT +8). 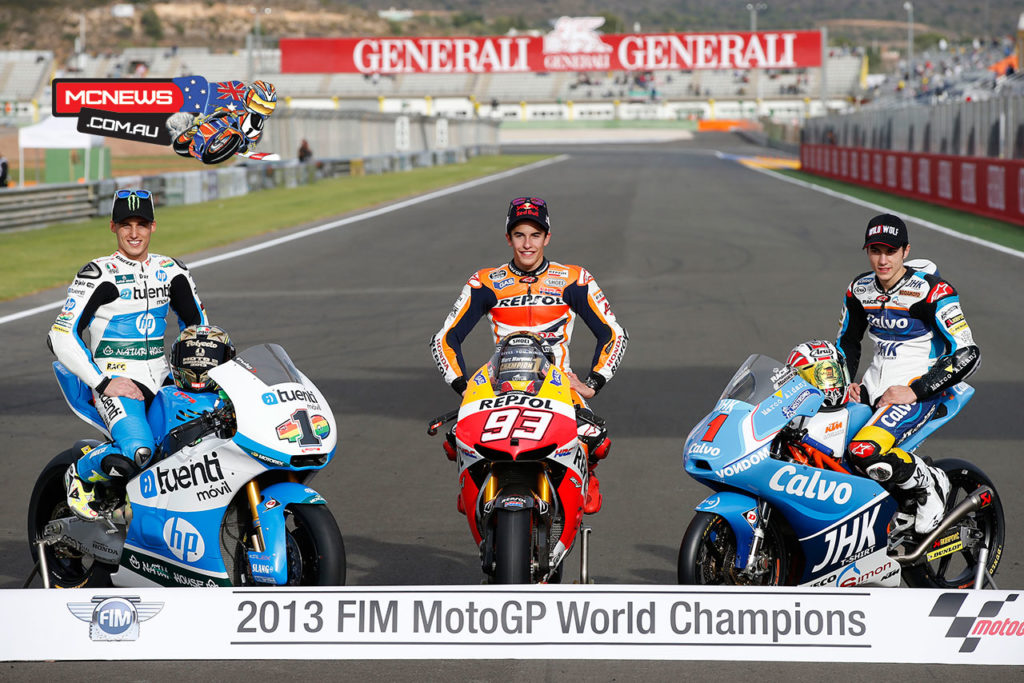 Bridgestone heads to Malaysia’s Sepang International Circuit for the first MotoGP™ group test of 2014 on Tuesday, February 4 as the world’s largest tyre maker embarks on its sixth season as the official tyre supplier to the series.

This year’s MotoGP™ championship sees a change in the classification of motorcycles contending this year’s championship, with two classes – the Factory and Open class machines – lining up on the grid in 2014. Open class motorcycles will have the advantage of having more engines (12) than the Factory class (5) per season, and a greater fuel allowance (24 litres vs 20 litres for the Factory class). However, the Open class bikes will have to use the Dorna-supplied software on the mandated Magnetti Marelli Engine Control Unit (ECU), while Factory class entries can write their own software for the compulsory ECU. Of major importance to Bridgestone at the upcoming Sepang test will be to determine how demanding the Open class machines – with their potentially less sophisticated electronic controls – are on tyres compared to their Factory counterparts.

With this regulation change, Bridgestone estimates the lap times of Open class motorcycles will be much quicker than the CRT machines last year. This means the tyres for the Open class will experience more severe operating conditions compared to the CRT tyres, resulting in overall higher tyre temperatures. To meet this demand, Bridgestone plans to offer more tyres in its heat-resistant construction for 2014, and will review data from the pre-season tests in order to confirm a supply plan for the upcoming season.

In order for Bridgestone and the teams to better examine the performance characteristics of the latest MotoGP™ machines and tyres compared to last year, for the first Sepang test Bridgestone will supply some new specification rear slicks, as well as 2013 specification tyres, to both the Factory and Open classes. The 2014 specification asymmetric rear slicks will be provided to the Open class in the soft and medium compound, while the Factory class will be allocated rear slicks one step harder; the medium and hard compound. The 2014 specification rear slicks combine many technologies to ensure the optimum combination of safety, durability and performance, including a new construction on the hard compound rear slick for greater grip at high lean angles. The front tyre slick tyre options for all riders at the Sepang test will be the medium and hard compounds.

The 2014 MotoGP™ World Championship will boast twenty-four riders from ten countries and Bridgestone will once again provide equal support to each rider in its role as Official Tyre Supplier to MotoGP™. In addition to supporting the group tests, Bridgestone Motorsport engineers will support all the teams in their pre-season testing programmes before the MotoGP™ championship gets underway at Qatar’s Losail International Circuit on March 20.

Hiroshi Yamada – Manager, Bridgestone Motorsport Department
“After the winter break I am really looking forward to seeing the riders and bikes on track again at Sepang. Like all the MotoGP teams, Bridgestone hasn’t been resting over the last couple of months; we’ve been designing, developing and producing new tyres for the riders to evaluate during the pre-season. This year’s testing schedule is particularly hectic with two tests at Sepang, then tests at Phillip Island and Qatar taking place in the next five weeks.

“Pre-season testing is always closely watched by the millions of MotoGP fans around the world and I think the inclusion of the Open class motorcycles will give the first Sepang test an even greater sense of occasion this year. Everyone will be interested to see just how closely matched the lap times are between the Open class bikes with their softer rear tyre allocation and the Factory class machines.”

Shinji Aoki – Manager, Bridgestone Motorsport Tyre Development Department
“Sepang is a good location for pre-season testing as the weather at this time of year is warm and usually dry, and the layout of the circuit has a mixture of slow and fast corners, long straights and heavy braking zones. This makes the circuit ideal for teams to test their latest components and assess how they work with our 2014 tyres.”

“It will be interesting to see the performance of the new Open class machines and in particular, how severe the more powerful Honda RCV1000R and FTR-Yamaha bikes are on tyres. Although we had the opportunity to gather data from the Open class machines at Valencia last year, the tests at Sepang will give us a clearer indication on the tyre performance of these bikes compared to the Factory class. As always, this first test in Malaysia is very important to our MotoGP tyre development programme as the data acquired from this test sets our development path for the rest of pre-season testing and ultimately, the whole of the season.”