While the first round of the Victorian Road Racing Championships at Broadford State Motorcycle Complex was a huge success overall, it was marred by a rather serious crash involving young road racer Brendan Schmidt.

I sat down with Brendan, his father Rod and Photographer Colin Rosewarne to talk about the incident and to give both Brendan and Rod a chance to thank all those who were instrumental in giving assistance both at the event and to acknowledge the support shown by his fellow competitors after the event.

For those who don’t know Brendan, he spent last year running in the Australian Superbikes (ASBK) on a privateer Kawasaki ZX-10R. The team was a privately run affair, with his father Rod being his crew and main support for the year, with some additional support from JLT Insurance, New Turf Synthetic Grass, Speed Angle and Fat Bobs Bar & Grill in Moorabin.

After riding an underdeveloped and under funded bike chasing a national series around the country, the decision was made at the end of 2016, to come back to Victoria and focus his funds and efforts on a crack at the Victorian Championships in the Pirelli Road Racing Championships.

The first round at Broadford in April, is when Brendan suffered his massive crash in the superbike race. Coming out of the final corner on the last lap of the race, Brendan’s bike collided with the rear of the bike in front. The bike in front had suffered a loss of power and unfortunately Brendan was right on his back wheel and had nowhere to go and no time to react. It was simply a racing incident, not anyone’s fault really.

It did however result in a high speed crash for Brendan. One which forced him onto the infield along the straight and slammed him into the side of the hill at high speed and with huge force. He was knocked unconscious immediately when he hit the ground and then continued to tumble and roll for a considerable distance.

The officials reacted in the appropriate manner and the ambulance was in attendance as soon as it was able to cross the still live track. As luck would have it, a fellow competitor from NSW, Dr. Richard Draper was racing that weekend.

Richard is a specialist trauma doctor, so it was a blessing to have him there and he very quickly took charge of the situation and the call was made to airlift Brendan to hospital immediately. He had suffered a big impact. I was personally standing right in front of the incident as it unfolded and can clearly say that Brendan was out cold from the initial impact onwards.

Which in hindsight was probably a factor in limiting too much further damage to his body due to being completely relaxed. I’ve been around race tracks and raced myself, so have seen plenty of crashes and this one was not a pleasant one to witness.

It not only effected me, but also every other person at the track that day, with some riders considering not continuing with the meeting. They however, thought about what Brendan would have said to them, which post event was, “Don’t be silly… get out there and race.”

Brendan suffered severe head trauma, with bruising and swelling on the brain and a small bleed. in addition to a fractured T5 & C4, two broken ribs, a punctured lung and a broken right collar bone. Thankfully, Brendan has no memory of the incident.

He spent several weeks in hospital and then rehab, but is recovering well and expects to return to road racing at the start of next season after he has had time to fully recover. Currently, his only real issue is some loss of motion in his left leg, for which the prognosis is he will regain full movement in time.

Having lunch with him, he surprised both Colin Rosewarne and I with how well he looked and how quickly he had recovered from what is a serious injury.

This article is being written for two reasons. The first is to give both Brendan and his father Rod, a chance to say thankyou to all those involved and secondly, to thank the road racing fraternity, who rallied around in support of Brendan and his family in the days and weeks following.

I questioned Rod on his thoughts on the crash and what occurred post incident and these were his words.

“The marshals and paramedics were fantastic. The way they took control of the situation, in particular Dr. Richard Draper, was fantastic. They kept everyone calm and were constantly reassuring me and explaining what they were doing and the reasons why. From the moment I arrived at Brendan trackside, right through to when the helicopter lifted off, I couldn’t have asked for anything more. Immediately after, Tony Bolin came and found me and returned the transponder deposit and the officials arranged for me to enter the track and recover the bike before the race meeting was re-started. They were fantastic.” (Fellow competitors had also taken it upon themselves to already pack up all of Brendan’s gear in readiness)

But it was what occured in the days and weeks following the incident which has left the most impact on his memory of the event. Instigated by fellow competitor, Irish Ex Pat Brendan Wilson, a fundraiser was hurriedly organised.

Brendan took it upon himself to approach several people to organise some prizes to be provided for a raffle and with social media as the medium, the raffle was run. Several businesses and individuals contributed to the prize pool and the limited number of tickets sold out rapidly.

Marcus Holt from The Grinning Dingo provided an Arai Helmet and a signed John McGuiness autographed visor as the main prize. Emtek provided a set of tyre warmers, Photographer Colin Rosewarne provided a poster sized print of the winner, Loza Weaves donated a Nolan Helmet, David West provided some West Sliders, Tristan Culvinor from Pro-Bolt Australia provided a Pro-Bolt pack and Rick Johnson from Pablos Motorcycle tyres provided 4L of Motul 300V. (Ironically, this was won by one of the prize givers, Loza Weaves) Both Brendan and Rod are unbelievably appreciative of their generosity.

The proceeds of the raffle are to go towards replacing some of Brendan’s gear which was cut off him and destroyed and if there is anything left over, to start the repairs on the bike. 150 tickets were sold at $30 per ticket, raising $4500 to the cause. Several people and businesses purchased more than one ticket and also offered donations.

This article was instigated by Rod and Brendan. Brendan however wanted to stress that it is not for attention for him, but to highlight the way in which the road racing community rallied around he and his family during this worrying time.

“I thought it was the best thing ever. It showed me that racing is more than just laptimes and winning.”

Rod was also overwhelmed by the support shown by all.

“I’m just blown away by the support both at the event and afterwards with the fundraising. Even though it was a serious crash, the racing fraternity is awesome. I’ve got my boy back, the first two and half weeks were scary.” 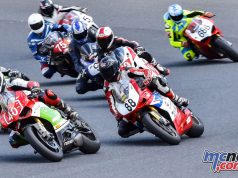 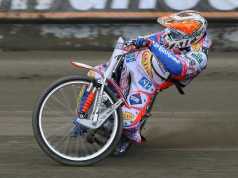 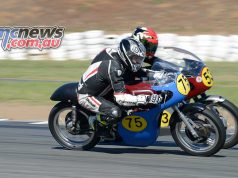