Spread over three quick-fire rounds during December at Hampton Downs, Manfeild and Wanganui, the 2015 Suzuki Series is the richest international motorcycle series in New Zealand with a massive $36,550 series prizemoney.

2014 Suzuki Series Formula 1 Superbike champion Horst Saiger, of Liechenstein, makes a welcome return to New Zealand to defend his title. Saiger surprised everybody by winning the opening race, round one and then the entire series with his smooth yet aggressive display of talented racing. Few people could have ridden his Red Devil’s Racing Kawasaki ZX-10R Superbike faster.

“Last year was very special as I didn’t know what to expect and it turned out as one of the best things I was involved in all my life, so the decision was clear to come back for this year.” 44 year old Saiger says.

“I’m really looking forward to the Suzuki Series as I will meet all those great people again – the Red Devil team of Graeme Cole and his family, the whole team is just a big demonstration of passion for motorcycle racing. I’m feeling really welcome and understood with them.

“Special thanks also to Kawasaki NZ, Metzeler NZ, and of course Allan Willacy from the organisation of the Suzuki Series, I couldn’t do it without their help.”

Scott Moir, of Taupo, finished second in the 2014 Suzuki Series by just three points and only needs to go one position higher to win the coveted title on his well set-up ex Jaden Hassan NZ title-winning Penny Homes GSXR1000 superbike.

Wellingtonian Sloan Frost has to be another favourite for overall victory in the 2015 Suzuki Series with a number of past wins and strong finishes on his Fujitsu TSS Red Baron Suzuki NZ GSXR1000. “Horst is going to be tough but I have a very good team from Australia helping me, we’ve got everything in place. I’m more confident as Suzuki have given me a new engine put together by Ray Clee which is pretty special,” Frost says.

Last years Robert Holden Memorial winner at Wanganui, Tony Rees (Whakatane), will race his well prepared Honda Rider Insurance CBR1000RR superbike. Rees has won the Robert Holden Memorial four times over 24 years, with his first in 1990. Who will place bets on him going for another victory at the Cemetery Circuit?

Rees enjoyed another proud moment when he rode with sons Mitchell and Damon to second place in the recent Motul 6 Hour at Hampton Downs. A race won by Aucklanders Toby Summers, Daniel Mettam and Connor London.

None of these experienced big-bore campaigners will have a moments rest because there are plenty more fast riders on the grid.

Supersport maestro James Hoogenboezem, of Christchurch, will be one to watch as he has joined the Tauranga-based Valvoline M1 Motorsport Team to race a BMW S1000RR superbike.

Ray Clee will be racing a new Team RCM Suzuki GSXR1000 superbike, while James Smith is also capable of leading the field on his Honda CBR1000RR on any given day. Wanganui’s Jayden Carrick is looking forward to improving on last years rookie season where he rode the wheels off his Physiotherapy Hand Clinic GSXR1000 superbike, scoring surprise podium placings at Wanganui.

Tirau resident Dillon Telford is riding very well and looking comfortable on his new NTB Aprilia NZ RSV4RF, one of only 500 built.

The person who could upset a few of the fancied front-runners could be Toby Summers, who steps up to the premier F1 Superbike class for the first time on his Barnes Jenkins Insurance Suzuki GSXR1000 superbike.

Summers won the Formula 2 championship in 2014 and while he wants to concentrate on his superbike effort, the Aucklander said he may still be tempted to defend his F2 title.

Horst Saiger is bringing to NZ his 39 year old world endurance team-mate, Roman Stamm, of Switzerland, who will compete in the ultra competitive Formula 2 class.

Saiger says, “My team mate from the world endurance comes with me and I was happy (and even more lucky) that he will be on a ZX-6R [not in his F1 class], also in the Red Devil team. I don’t want to tell you how fast he will be – but I wish his rivals good luck!”

Avalon Biddle is back home after a stellar European campaign where she won the 2015 FIM European Women’s Cup championship! Biddle won the 2015 NZ Superlite championship earlier in the year and this summer is stepping up a category in performance. “I’m riding the same bike I rode in the Suzuki Series last year built by Chris Osborne, except last year it was a 450cc [in F3] and this year he has reverted it back to a 600cc for me to race in F2. So essentially it’s a GXSR600 built by Ozzy Performance,” Biddle said.

Multi world Sidecar champion Tim Reeves will be racing in the three round Suzuki Series which kicks off at Hampton Downs on December 6 and finishes at Wanganui’s Cemetery Circuit on Boxing Day.

Tim Reeves last won the world title in 2014 and will be partnered by Mark Wilkes for the Suzuki Series, both from the UK. Reeves is also an Isle of Man sidecar TT winner. The Reeves/Wilkes combo are bringing their world title winning LCR F1 sidecar to do battle with New Zealand’s fastest riders on our home circuits.

Defending Suzuki Series champion Aaron Lovell (Hamilton) and Tracey Bryan (Tauranga) were unbeaten last year but don’t plan to rest on their 2014 laurels after an off-season chassis rebuild, following a high-speed crash on their LCR Suzuki at Ruapuna back in January.

Despite fierce international opposition Lovell and Bryan were not headed at the recent Shorai Batteries International at Hampton Downs, and will prove tough to beat with a few new tricks up their sleeve. “I’m out there to prove we can win it again. Even though there’s a world champion coming out we’re going to give it our best shot to beat him, we want to win it again! We’ll be running a new set of tyres for every meeting which we’ve not done in the past,” Lovell said.

Current NZ champions Adam Unsworth and Stu Dawe, of Auckland, are very competitive on their aging 1988 built Eni Windle F1sidecar, especially at Wanganui, and you can guarantee they’ll will be up with the best when the flag falls.

The Western Australian pairing of Des Harvey and Dirk Jeal may upset several teams around the slower tracks on their F1 ‘short’ sidecar, while the likes of Masterton’s Spike Taylor/Astrid Hartnell (LCR) combination, Auckland brothers Chris and Ritchie Lawrance (Windle F1), and the resurgent Pete Goodwin/Darren Prentice pairing will all be in the three wheeler mix.

$25 ‘early-bird’ tickets for the Wanganui round are available at www.cemeterycircuit.co.nz and go in the draw after the last race to win a brand new Suzuki UK110 scooter in MotoGP colours – entrants must be present to win. 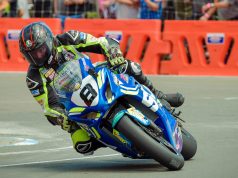 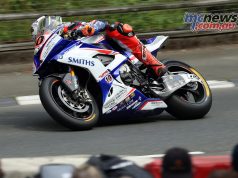 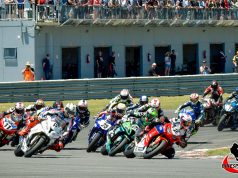