(With the satire used in this article, it is appropriate that I inform you not to take any of this reading seriously or use any of the below information as fact – even though I would if I was you)

With motocross becoming more a calculated and science based sport each year, there seems to be a constant influx of new faces jumping into the moto scene. We don’t just see part time trainers and mechanics anymore; there are now full time practice mechanics and trainers, dietitians, physiotherapists and mentors. All they need now are some used car salesmen and a circus crew to really neaten up the package.

Onto the serious stuff now though… Well as serious as this article can get.

It seems every rider these days has to have a pit boarder on hand at all times, whether it’s at state or nationals, at their local three lap long club day or on their 50 track in the backyard – if they don’t have a pit boarder with them, things aren’t going to end well. This is despite the fact that most of these hard core pit boarders rock up late and hung-over from their big night at Hooters and forget who their rider is when the gate drops anyway because they’re so focused on how sick old Johnny was ‘tappin it frew da whoops’.

So, what are the essentials to be a legit pit boarder – if that’s even possible?

Well first of all, you probably want a pit board right? It has to be factory though, so throw on some Monster, Rockstar and Red Bull Energy drink stickers and that will do the trick. Actually, come to think of it slap on some Thor, Fox, Fly, Troy Lee Designs and No Fear logos as well, just to be safe.

So now that you’ve got your legit pit board design sorted, it’s time for the accessories – a must if you want to style it up with your rider in last place.

First up, you need a white board marker and this one is pretty obvious, it’s for writing inspirational quotes like ‘go fast’, ‘go faster’, ‘go even fasterer’, or maybe an explicit drawing if you really want to amp up your rider. Forget lap times, competitor gaps and pre-scripted words of advice, because they’re all overrated and in my eyes a total waste of time.

Next, you need a backpack or three – one for your tools, one for the rider’s snacks and the other to fit the rider’s girlfriend in, because everyone loves seeing a clingy girlfriend on the start line. Make sure in that third bag you also add in some mini front number plates too, so you can plaster them all over the club’s grounds and get ridiculous amounts of exposure for your rider.

Then you need a towel. Preferably a large beach towel, or even a bed sheet, so that when you’re hurling it around mid moto like an ape, you not only distract your rider (which is an awesome thing to do) but can clothesline his competitors, which might I add is totally legal…

Now, while most manufacturer supported teams run head sets for wide spanned track communication, you could go one better and grab your best Xbox Live headset from home and talk to your other pit staff (AKA yourself) all day.

To complete your factory pit boarder outfit, you will need a set of black and yellow Mechanix Wear gloves, and if you can’t get a hold of those just use snow gloves because they don’t inhibit your writing or tool using abilities at all! Then of course you need a cap. You are probably safest with a Monster, Rockstar or Red Bull Energy flat peak as these are never worn by the jersey bandit population who think Brian Deegan will win the 2015 Nationals. To top it off, you need a set of black Dickies pants and some hard-core gate stomping shoes. I would opt for either Crocs or DC’s for the shoe, but if you want to eliminate any chance of female interaction (which can distract you from your job), then Crocs are your best bet. Oh, and if you wear the Crocs make sure your rider thanks this brand, as well as all of his other long term sponsors like Pirelli, Dunlop, Bridgestone, Golden Tyre and Michelin!

If none of the above works for you, which would really surprise me considering how fool proof it is, pit boarding probably just isn’t your thing. If that’s the case I’d look at becoming a used car salesmen or circus act in the next couple of days, to ensure I see you working for one of the factory teams this weekend at round four of the MX Nationals at Murray Bridge, SA.

To finish off, on a serious and respectful note – the managers, technicians and mechanics of race teams and privateer efforts are the guys that make our sport as successful as it is, so to you boys – Thank you very much for everything you do! 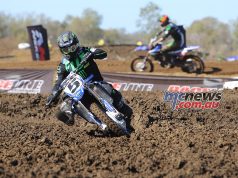